If I was to finish ticking off every Good Beer Guide pub in the wholly rewarding county of Derbyshire before the 2020 edition drops through my letterbox in late Aug / early Sept, I needed to ramp up the intensity on the 'Friday night after work' section of BRAPA.

I asked my boss if I could leave 15 minutes early (oh, the cheek of me!) to catch the 16:04 direct service to Alfreton, and after about 90 minutes of sweaty pacer discomfort, I marched 20 minutes across to the town centre to get a bus to Ripley where two of my six 'outer Alfreton' ticks were.

I'd had two teachers at school from Ripley, they were both weird with strange accents - one Martin Clunes-esque, the other one like a young Victoria Wood.  I tried to pay the bus driver using contactless card, but he told me this was the only service in Derbyshire which still didn't do it!

On the main drag just by the now empty market stalls stood my first pub ...... 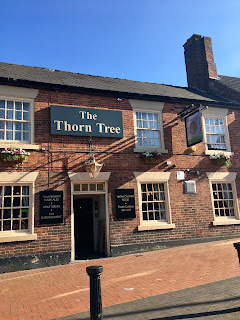 I'm not sure if it was simply because I was about to go into a pub in Derbyshire, or the fact it was called Thorn Tree (1674 / 2647) as per that brilliant one on the hill above Matlock, but I was expecting good things here.  A faintly smiling but lukewarm welcome from the two barmaids, though one of them wearing a Fosters t-shirt perhaps a presentiment of things to come. The decor was slightly twee, identikit drab, like it had been refurbished a few years back by someone who didn't understand pubs, and the smattering of blokes indoors looked thoroughly miserable, like they didn't really belong, which of course, they didn't.  On the plus side, my Welbeck Abbey was on good form.  All the action (well, most of the people) were making the most of the evening sun so I joined them in the outdoor drinking area, after all, it couldn't be any worse.  Wrong!  Every table was a cluttered mass of empty Stella glasses, full ashtrays, wrappers and empty crisp packets.  I even stepped on a polystyrene tray full of tomato sauce, but it could've been blood.  This was like CSI.  It looked like no staff member had been outside to clean up all afternoon!  I moved to a sunnier seat, free from rubbish, just in the nick of time cos loads of Friday night revellers bounded in like eager hounds with their tight leather skirts, botox, tattoos and leopard print attitude.  Time for me to move on.  Ugh.

My other Ripley pub was a little bit north of centre.  Now, my expectations were suitably lower, still, as I reached it, I suspected that the Talbot (1675 / 2648) might be more my kind of place ......

And sure enough, like being at Leeds Fest 1999, where there's a BRAPA 'downer', an 'upper' is just around the corner to take the edge off the Hoffmeister (or something).  What am I talking about?   A friendly welcome ensues amongst some very bizarre handpulls that look like ancient chess pieces.

I order a beer called 'Late Night Ghosts' from that Pentrich place (all their ales make me piss even more crazily than usual!) because I like the name, but it was way too hoppy and I nearly missed my bus as it was impossible to neck!  To my right, a guy dressed like a philosopher is forcefully trying to explain some highbrow concept to two naughty twilds, and he just didn't seem the type you'd expect to be left with kids!  Two dogs are over this side too, so I was always going to grab a seat as far to the left of the pub as possible.  Perched at the bar, a local bloke complains to the barmaid that his lager is too fizzy.  I expect her to laugh, or smack him, but she asked if he'd prefer an ale and he admits yes, it might be more to his taste!  Was this serious?  Or was it part of some elaborate staged joke I just didn't get.  So bizarre.  I think his wife joined in too.  He was also part of a lot of 'sparkler on or off' talk too.  Sat down at the far end, the Thorn Tree already a distant memory, you could appreciate the quality.  The strange shape plus the warming red decor, worn seating, piano and old fireplace made me think that if the Salopian Bar in Shrewbury and Peveril of the Peak in Manchester had a fling, this'd be the spawn.   A BRAPA record was set for 2019 when I nabbed THREE beermats to add to my ever expanding bedroom wall collection.  The wiry characterful landlord then appeared, and shook his nuts at everyone around the bar.  And just when you thought it couldn't get better, the botoxiest lady and her man-friend from Thorn Tree beer garden walked in, and convinced an old Yazz to have a glass of wine instead of a tonic water.  What a difference a pub makes! 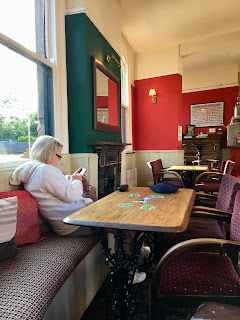 The bus route back to Alfreton actually took me through a village called Swanwick, where one my other remaining Derbys 'ticks' were, so even though it'd mean a very late finish, now felt the perfect opportunity to get this one ticked off.

Firstly, there was time to appreciate the village church ..... 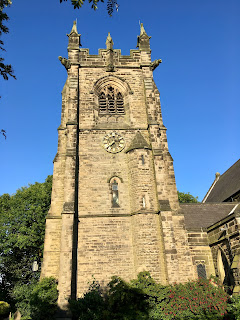 And then, the pub itself, though I took the shot from a safe distance as there were tonnes of rowdy, laughing locals outside soaking up the rays ....... 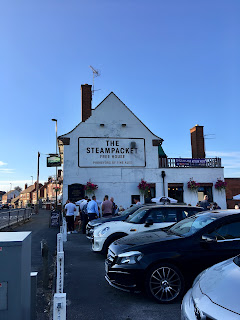 I had a few doubts regarding what lay in store at the Steampacket (1676 / 2649) but as I gently edged the door open, a quiet traditional scene greeted me, and a chirpy landlady who looked like she'd worked in Derbyshire pubs since she was in the womb, pulled me a pint of Bass.  A quite drunk bloke appeared at my shoulder, and complimented my patterned NOT AT ALL PAISLEY shirt (one of three I bought from Mr Li in China last month) but the real reason for engaging me was that I needed to move out of the way for his pints, which apparently were sentient beings which liked their own personal space.   Another bloke came in and I thought he asked "Can I have some water for my ducks, duck?" but now, it is more likely he probably said dog (water for his dogs I mean, I don't think he called the landlady a dog).  With my back to the wall facing the bar, I wondered if I could neck my pint and rush for the 20:09 9.1 Mansfield bus.  But then I heard a voice on the wind like some judgey twitter ghost ..... "you don't rush Bass, Simon!"  so I accepted that, settled into a bit of Castleford v L**ds (so I could support 'Cas on the Bass') and even went back up for another half, the landlady gave me that slight nod of approval and hand signal you get whenever you order Bass, whether it be Mumbles, Plymouth or here in Derbyshire.

A really positive pub to end a great night, but it wasn't actually at an end quite yet ...... more on that tomorrow night where I'll also chat 'Gainsborough'.