Monday dawned cloudy, with a chance of pork sausages, my final day of an epic week in Cornwall which has actually been more painful to write about (and probably read) than it was to do in reality.

I was off to one of my most remote pubs first, a pub so challenging, even legendary pub ticker Duncan Mackay earlier this year, commented "I'll love to see how Si manages this one on public transport" so I thought I was a reet clever devil in that I'd come up with a solution!

One train stop from Quintrell Downs took me to St Columb Road, where according to the bus timetable on Google Maps (usually reliable), I could walk around the corner of a roundabout where bus 95 would pull into a lay-by on the A39.

Of course, the train was nine minutes delayed, the A39 is a terrifying road which didn't seem like one you should even be standing on, and it wasn't so much a lay-by as the hard shoulder!  Still, if Google Maps told me to jump off a cliff, I probably would ......

Still, as I saw the bus well in the distance, I had the faith to stick out a long, confident arm trying desperately to make some kind of determined eye-contact too ...


..... But he just pulled into the outside lane, looking at me like "you seriously expect me to stop here?" and sped off.   Stranded.  No bus or train for over two hours to anywhere, the plan had been to hop off at a phone box in a place called Trewarmett where the pub was about a 20 minute walk away.

One thing for it, taxi!  A shady Northern Irish accent answered the phone, and after a bit of heavy breathing and deep thought, we separated the BRAPA from the IRAPA and he tootled around the corner to pick me up.  A life saver, so he was.

He couldn't believe where I was going, traffic was insane, but I struck a deal that if he also hovered around for me and ferried me on to Port Isaac, he'd get a mention in my blog!  Pretty sure that made no difference but the promise of plenty of cash did but despite using up almost all the rest of my 'emergency taxi fund'. I still think it was worth it.  Probably.  Shame though as I thought I'd be returning to York with a nice wad of cash!

He was a great guy to chat to as well (we even bonded about both be Taureans!), luckily knew the area so got us past some nasty traffic, though the last couple of miles was like a cross between driving to the Trengilly Wartha at Nancenoy and driving around the Lizard Peninsula (sorry if I've lost you now).

We turned around the impossible entrance into the pub car park, and told me he'd see me outside in 27.5 mins (shades of Taylor : the Rural Cambs Years) but he had to climb a hill to find an area with reception so he could ring his taxi firm and tell them why he'd gone so far 'off grid'!

Finally, I could appreciate I'd arrived at one of Cornwall's most isolated country inns ..... 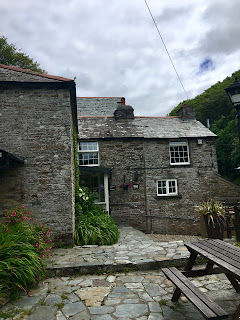 Mill House Inn, Trebarwith Strand (1662 / 2635) is described in the Good Beer Guide in such a way that makes it sound like a restaurant that is good enough to allow drinkers to perch at the bar without eating.  So imagine my delight on finding a sizeable traditional farmhouse bar area, with all the posh foodie areas nicely separate.  I was, perhaps inevitably. the first customer, but received a chirpy welcome from the bloke and he sold me a Tintagel ale, the brewery we'd actually passed just a couple of miles away.  Well, it was one of those ales that was of such superior quality, that the first sip catches you off guard.  It only happens a couple of times each year, one of those beers you should be able to give full marks to on the NBSS even though silly TWAMRA seem to frown at such a practice, as though you could never get a 100% top level ale.  Well I've got news for you, just as in Littleborough a year ago, it DOES happen on occasions.  Barman was pleased how much I was enjoying it, so started selling the pub to me by passing me this local brochure (which seemed more about planning a wedding here to be honest!)  The chef said hi, then landlady offered me lunch and I accidentally ignored her, because no one has ever thought I was eating in a pub before now.  I must have a wet-led face!  After one conversation with the barman, I said, more patronisingly than I intended, "you ACTUALLY have local drinkers?" and less than five minutes later, the most stereotypical Cornish man with long beard, oilskins, fleecey jumper and combat trousers plonks himself next to me at the bar.  Had they paid him? Well, with that, I realised I'd finished my ale much quicker and 'twas time I left, going for a quick look at the beautiful stream and woodland surrounding the pub.

Yes, I was a bit early for the taxi having been done in 25 minutes, but I was just hoping he would show.  After all, I had a date with the doctor.  Doc Martin that is.  Ho ho.  I'll tell you all about that in our final part, tomorrow.