The taxi driver convinced us that he may as well drive us to Marlpool rather than back to Ilkeston station for a connection to Langley Mill and then a walk.

If you couldn't trust this guy, who could you trust?  I can't describe him other than to say he is the most Derbys man I've met since a scary bloke from Tibshelf in 2002, one of the most brilliant BRAPA characters of the 2018/19 season, and that is going some if you are a regular reader of my adventures!


Marlpool Ale House used very much the same tactic as the pub that recommend it, the Burnt Pig, and kind of figuratively grabbed us by the scruff of the neck before I had chance to make any judgey BRAPA observations, though looking back, it seemed the bar was at a weird height and it didn't look like the kind of place you could get as cosy in as the Burnt Pig.  But the owner and smattering of local old blokes were even more welcoming and personable as their Ilkeston counterparts, if that was possible!  News that they brewed their own ales caused me a moment of internal eye-rolling, for 'I've seen it all before' where micros overstretch themselves / get carried away with their own brand and the ales taste exactly what they are, like they are brewed in an outhouse behind the pub!  But not so here, the Blind Boris mild was a delightful drop, even if I thought the decision to serve it in a Guinness glass was a bit of an own goal.  I didn't think the lighter beers could follow suit, yet they did.  During the inevitable building and brewery tour, I discovered the hidden depths the pub possessed room-wise, and Dad pointed out the Moors' & Robson's mirror and explained the M&R 'Muck & Rubbish' nickname it had when he was a Hull youth getting on t'ale for the first time, which the owner seemed to really appreciate!  There was a guestbook to sign, and I had to ask the burning question 'why've you been deguided from the 2019 GBG?' 'Because the local CAMRA don't like to travel far from their Long Eaton home' was the cutting reply.  YES!  Get 'em told.  Talk about making your visitors feel welcome and valued, so symptomatic of this part of the world,  nowhere could have done it better, and combined with great ale, that's enough for me.   Get it back in the GBG!

Well, this had been quite some day as we got ourselves back to Ilkeston after a good walk back to Langley Mill for a final pub of the day.

It was handily situated by the station, peeping out from behind the trees ....... 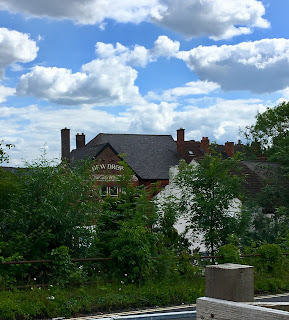 Another reason it made sense to finish there is that it wasn't opening til 4pm (though my GBG had claimed 3pm on a Friday, part of the reason we took on the Marlpool additional 'tick').

It still wasn't quite 4pm, so we had to hover and took photos.  If the exterior was anything to go by, this was going to be another cracker. 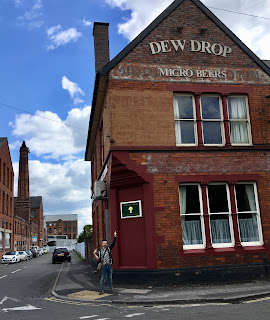 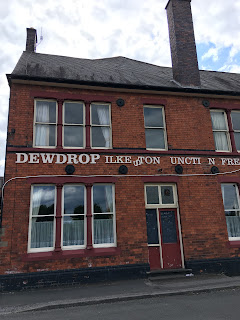 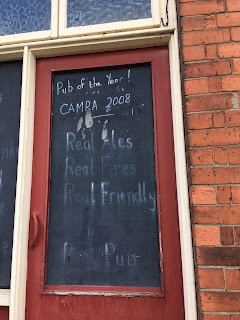 Look at it!  How deliciously no nonsense and basic can a pub be?  I was in love and I hadn't even stepped inside.  Then I saw an open door, hurrah!  Had it been open all along?

In all the mayhem, Dad had disappeared into Acorn Antiques or something, he loves a good antiques shop ....... and even that looked like a cross between a great pub and a satanic mill ..... 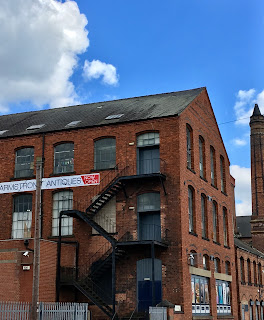 And I probably shouldn't have been surprised but Dewdrop, Ilkeston (1667 / 2640) turned out to be easily pub of the day, and this was against some strong competition, and I wouldn't mind betting that when I complete Derbyshire in a month or two's time, that this a contender for best of the lot!  I walked into the large bar area, where I immediately recognised the two nicest blokes from the Burnt Pig smiling up at me.  "Dad's gone missing" I said, but they'd not seen him either.  I went to get us pints in, and after commenting favourably on Oakham beers, the kind landlord and an old man tell me the 'Bevil' is actually half n half Green Devil and Bishop's Farewell.  YES!  I always feel bad when I see Green Devil on and chicken out cos of the strength (I don't do halves!) so this was the perfect solution that pubs like Gardner's Arms in Lewes should've thought of if they were true greats rather than just good pubs.   Having this sixth of the day not to mention the several Marlpool large tasters?  What could possibly go wrong?  I plonked our glasses down and went to search for Dad, but I can't have been that worried as I kept getting distracted by the lovely side rooms so took lots of pics, then I got paranoid something might steal our Bevil, so I returned for a sup, and Dad appeared finally.  Hurray!  We chatted amiably with the blokes and other older blokes arrived, one legend had one of those crazy voicebox things, they were all SO nice, and we went up for another Bevil as we had time before the train back to L**ds.  The pic of me with them at the top of this blog I couldn't even remember being taken by Dad til he reminded me last Saturday in Gainsborough!   Classic town, classic pub, classic folk. 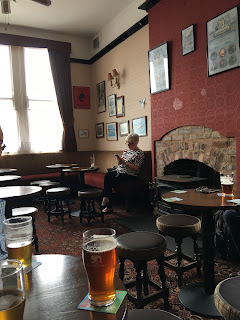 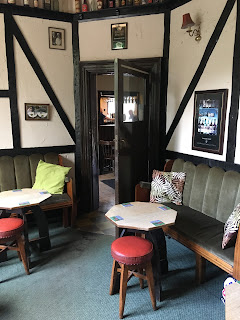 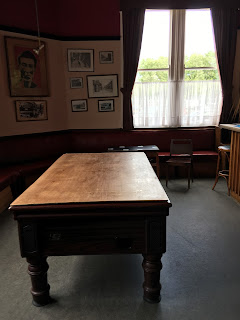 Yes, let us just say I was a BIT worse for wear on the train ride home as we got talking with two crazy women, but I snapped out of my drunken stupor for the last leg and returned to my normal self a bit, and then a coffee in York station sobered me up further!

Nevertheless, I'd have to go back to that day in St Neots that we don't like to talk about to find a drunker BRAP, but it says a lot for Ilkeston and the chances of me returning to Derbys the following day were pretty much zero - I slept in til about 2pm and was paralysed til Sunday!