As I tried to stand in the one remaining sliver of shade on this boiling hot day, facing the Greyhound pub in Cromford, waiting for yet another delayed bus, it hadn't really occurred to me that all four of my remaining Good Beer Guide ticks today were micropubs.  But perhaps, here in 2019, I shouldn't have been too surprised.

And I was already paranoid after the 154 went straight to Bakewell, without stopping at Birchover or anywhere else!  So when, half way to Wirksworth, he turned right at a roundabout instead of going straight down, I panicked and pressed the bell, 15 mins from my destination!  I was more mentally scarred than I realised (the bus actually doubled back on me as it passed me 5 minutes later, no I wasn't having a lucky day!)

As I walked along the road in the searing heat, there were two reservoirs to my left down a hill.  Two Fiat Unos full of teenagers brandishing cans of Carling whooped at me, in their bathers, ready to jump in.  It had 'teenage drowning death my misadventure' written all over it.  I could only throw my head back, laugh and feel the power one feels when being the last person to see a group of drunken teenagers alive.  I'm going to hell aren't I? 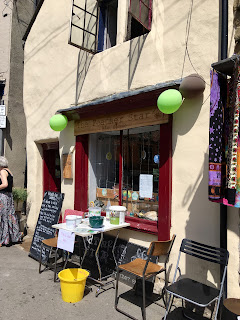 Named after a local fossil or some shit, as is a Micropub's want, I had heard mixed reviews of Feather Star (1670 / 2643) but was immediately struck by a unique atmosphere more in keeping with a centuries old heritage inn, I felt.  A very easy friendly welcome from the young rocker chap who looked like he was about to crack a joke at any moment but never did, and a soundtrack which makes you forgive piped music in pubs.  In fact, the upstairs was a curio vinyl record lovers dream, most of it utter tripe, but you had to admire the sentiment.  A tiny place, it was a rare Micro which laid its heart on the line with a "love us, and we'll love you back" attitude instead of the usual 'vague fake friendliness because it is expected of us under Hillier ruling 6.1b' (also a Derbyshire bus) we'll see in a future blog next week.  As a consequence, I was more than prepared to ask a couple (and sort of two smiling but serious beer blokes) if I could perch opposite them on the table 'if I promise to behave' which might've sounded an unnecessary attempt at quirkiness on my part, but I was deadly serious, for this is BRAPA.  I got the GBG out and theatrically highlighted the entry, but then noticed the couple were reading the pubs own copy, much cleaner, so soon I wasn't behaving and boring them with pub tales (a bit like Duck Tales only more acceptable than Huey, Dewie and Louie).  Still, they were a lovely duo, though quite anxious I didn't miss my bus, which suggested they didn't wanna be stuck with me for another half an hour, which was fine with me!  The sign actively encouraging you to eat your own food in here because it is 'fuel' was music to my ears, so I tucked into my C&O pasties with gay abandon, if that is the phrase.  Beer by the way, spot on.   As usual, Martin Taylor is right, a must visit!

The bus stop wasn't far off, though I had no idea where it was stopping at my next port of call, this place called Duffield, another new town for me.  Amazingly, the pub was practically opposite the bus stop and I was straight in.

I admit I was a bit nervous, for the couple I'd been chatting with in Wirksworth told me it was 'Duffield Carnival' today so it was bound to be busy, and I was getting mental images of topless blokes and women with triangular lingerie holding jugs of Bass covered in tinned tomatoes running amok. 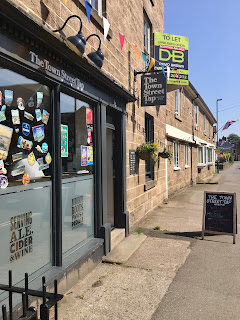 So imagine my surprise to find the Town Street Tap (1671 / 2644) a sea of religious calm, presided over by a sort of Blonde Apron Jesus.  This Tap had gone for the 'Bournemouthian' approach of 'no bar' but unlike the sorry collective of samey ale outlets in the Arsehole of Dorset, you were left in little doubt who was in charge here, for he radiated 'presence'.  "Boiling today!" I remarked, wiping away sweat stinging my eyeballs.  "The ales are listed above me" he said curtly, indicating heaven (or a beam), showing he had zero time for my bullshit small talk.  Good on him.  I was obviously determined to make an impression, so I went for this incredible black treacle and burnt toffee stout (such an attention seeking choice!) but whilst BAJ remained holy/wholly unflappable, an excitable bloke commented "you've ... you've gone for the stout!  I half thought about getting it but ...." and his voice trailed off.  I offered him a taste, but his wife put a disapproving hand on his arm, and that was that.  Still, at least my efforts had been rewarded!  You could say this place lacked the quirkiness of the Feather Star, and was more traditionally micro, but it was such a relaxed, easy place to have a drink (bigger than average which helped), I enjoyed it every bit as much despite the lack of chat.  Felt like the type of place where time could quickly slip away, so I had to steal myself to jump on the next pub to Derby.  And as for the carnival, what carnival? 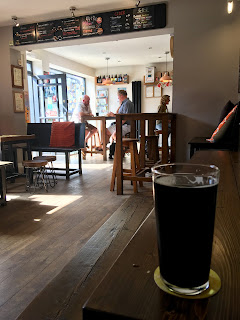 Despite Duffield having a railway station, I only really had eyes for the bus, which at least meant I could jump off a bit earlier, as my first of two Derby ticks was on the outskirts.

I hopped off at the Horse & Groom, another pub I visited when quite drunk so couldn't fully appreciate its friendly charm, and with the sun still beating down, I strode out as fast as I could to the edge of town where the more difficult pub was ........ 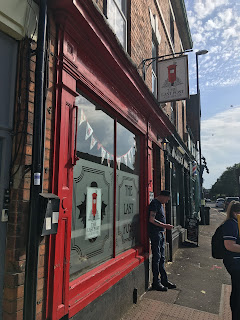 Traditionally, the fifth pub is the one I most struggle to recall on a 'six pub day', but I've found over the years that if one thing can bring you back to sobriety quicker than you were expecting, it is the realisation that everyone else is more pissed than you!  And that was what happened here at Last Post, Derby (1672 / 2645) where as soon as I approached the door, the gentleman in that hat pictured above wailed "I'M SMASHED!" in my ear, put his arm around me, and staggered to the bar.  On the other side, an old bloke with amazing shirt and terrible cough who couldn't walk properly bumped into me in the bogs, literally, and when I tried to sympathise and said the drinking was getting tougher as the day went on, he told me "nahhhh, another beer will do ya good lad (cough cough cough)" so I ran off without drying my hands.  Not sure on that one though, I was told they were having a special 'beers from Yorkshire' day.  'Oh, that's a co-incidence, I'm from Yorkshire' I commented, but then a man said "BOOO!" behind me.  "Our resident Lancastrian" explained the barman, indicating a younger man with an evil beard.  Not sure I've ever been booed in a pub before, probably, but not as common an occurrence as you may think.  About 20 minutes later, and the barman who had previously said a painful lengthy farewell to 'smashed' guy helped put flowery shirt into a taxi and waved him off.  As he closed the pub door, he puffed out his cheeks in relief.  "Peace at last!" I commented, he agreed and we got chatting on BRAPA pubs and stuff, a really personable bloke which was good cos I''d found Mrs Last Post a bit stand offish on arrival, but even she warmed to the task.  I didn't really get on with my ale, it smelt of a Tom cat in heat which was a bit off-putting, perhaps an interesting hop!  Who knows?

So that had become an ultra-positive experience, so time for the final pubby push as I bolted across Derby with a new found positivity and smile on my face, proof that taking on four micropubs consecutively doesn't have to be viewed as a negative.

It was a fair old walk, and I seemed to be following this blonde lady and a green shirted man for about 20 mins, they seemed to be going exactly the same way as me over this grassy quite picturesque area of the town.  Wouldn't it be funny if they were going to the same pub as me?

Well, sadly, the nice blonde lady veered right just at the vital moment, but the bugger in green just got in before me .....


But my memories are rather hazy regarding the Little Chester Ale House (1673 / 2646), so as you've already to endure a long blog, I'll keep it brief.  To be kind, I'll put it down to '6th pint on a hot day syndrome' but this place just felt like a ' characterless micropub by numbers' compared to the previous three.  Despite a lack of customers, there were very little seating options, and I ended up wedged between bar, cleaning equipment, and an open door to a concrete outdoor bit which didn't have any seating either.  A couple opposite me went outside for such a long ciggie, I was sure they weren't returning to their pints/phones etc but they did.  And I drank a huge bottle of lemon squash concurrently (or at least alongside!) with my ale due to extreme dehydration which probably made my observational skills even worse.  If I've misrepresented the pub and it is actually wonderful, characterful etc. please comment below in the interests of fairness, thanks.  But the main thing was I'd got 6 more ticks done after a really unlucky start to the day, and the finishing line for Derbyshire is almost in sight.