With the veil between life and death at it's thinnest (just look at the zombies on York's number 7 bus to the Designer Outlet), this is my favourite time of year and the Autumn colours were amazing.  Mr SatNav confused Dad, who, despite knowing East Yorkshire inside out,  obeyed the command like some Lurch like character and soon, we were stuck in traffic at the 'pretty market town' that people know as Beverley.  Or as I call it, Overrated Suffocation Bullshitsville.

Yes, BRAPA is back.

Hornsea is a special little place, known mainly for a famous "closed in the 1980's" pottery, a boarding school my Dad went to about 300 years ago, and a mass of traffic heading purposefully east as if they either (a) don't realise the coast is there or (b) are quite happy to commit suicide.

11:58am and lurking outside the pub like stalkers when the sign clearly said "OPEN" wasn't the best start, so it was time to go into my first BRAPA pub in what seemed like about a year...... 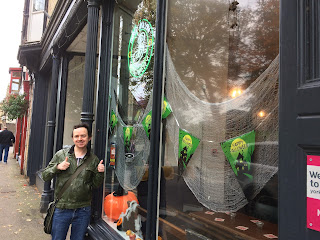 Mine host, Lucy, was everything you'd expect from a Micro Pub owner, personable, friendly, very Melbournian despite being English.  I think Micro Pubs fall into two categories - (1) cold, clinical and slightly weird (2) warm, homely and slightly weird.  Luckily, this was the latter.  The Hallowe'en decor may be cheesy to some, but I can't get enough of black n amber pumpkins with Mike Phelan's face, fake cobwebs and all that shit.  Love it.  The most notable feature were three former aeroplane seats, complete with seatbelts, one seat even reclined.  I told her "ugh, I've barely recovered from a 24 hour plane trip from Melbourne" but she displayed little sympathy.  We got talking BRAPA pre-emptives and ale, reassuringly she knew every beer from Great Newsome, Half Moon and Hop Studio yet had never heard of Titanic or Plum Porter which is the most East Yorkshire attitude you could wish for.  She ramped up the rivalry with our next pub by saying they were darts league rivals.  Any hopes of sitting down and chatting with Dad were put on hold, you can't not be sociable in most micros and this was a rare occasion of when it was actually welcomed!   Lovely place.

Back along the road where Dad and his friends used to drink drive in the 60's when it was errm, legal, was this classic pub.  We'd been warned about Sunday lunchtime dining so when we arrived at a near deserted car park, Dad assumed it was closed.  Except a door was WIDE OPEN so Mr Sat Nav said something sarcastic like "get a grip Bernard" and we wandered on in.  The opening hours of this place, plus the remote location make it the Anchor Anchor of East Yorkshire - not so much, "we are open and happy to serve you" as "this is a test to see how desperate you are for a drink".  Sunday is the only open daytime, yet the lack of food and customers were both reassuring and worrying at the same time.  I chatted to the barmaid about keeping up the Hallowe'en ale theme as I ordered a "Red Fang", and I alluded to the darts rivalry with Stackhouse which didn't really work.  Probably cos it doesn't exist.  We found a snug (unlit fire but still snug)  with a huge collection of mini teapots, owl pictures and displays of garlic cloves.  It was very odd.  And then a mad biker woman about three rooms away shouted to me that she was sorry for blocking the heat from the other fire, though obviously I couldn't benefit from 'three room away heat', strange woman!   Then more mad bikers arrived, apologised to us just for existing, which doesn't bode well, so we left before they had chance to unleash their full cycling twattery on the pub.

I have a plan in place for finishing East Yorkshire's BRAPA ticks next week, so for now, we hot-footed it down to Market Weighton.

Despite it being 2:30pm, a man who looked important was leaning on a gate outside our (very closed) designated pub.  I got out of the car, by which time, he'd got into a car, and tried to reverse over me.  He used it to practically pin me to the pub door and asked what my game was, when I asked when he was opening, he said 3pm.

3pm on a Sunday?  I didn't argue, one foot on the reverse pedal and I'd have been squished.  Luckily, a pre-emptive was nearby......

For the third time today, there was an element of surprise to see it open - a tiny Micropub this one, and a man, not unpleasant, in fact quite nice if a bit full of himself in a Yorkshire way, told us he was in temporary charge.  He apologised for only 2 beers being on but the owner was away and the pub doesn't reopen til Thursday and everyone was 'caning' it on Saturday night, so it's not worth their while putting new ones on blah blah blah, yes I get the picture.   About 10 ciders on though!  "You sure you want the dark beer?" he asked me about 5 times, "personally I can't stand dark beers!"  The guy was Dick, of Dick's brewing who brew Big Head - a 'cheeky' named beer I once drank in Lastingham before I got ill from their soup (allegedly).  He's a "cuckoo" brewer meaning he uses other breweries to make his recipes.  Interesting concept.  It was a cosy little pub with the added quirk of a tortoiseshell butterfly having to be let out for it's evening flyabout, I like a good pub pet.  Yet the pub was not a patch on the Stackhouse, it must have a chance of getting into GBG one year if it stays in existence.

3pm then and the pub was finally opened.  Dick had told us this was their first day opening following a big refurbishment.  So in a sense, we were lucky to get in at all. 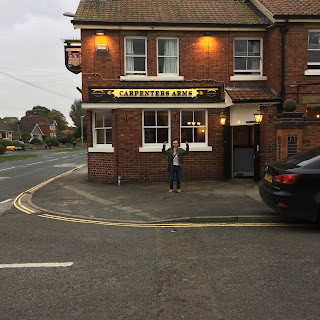 We were greeted by a demonic goateed ginger chap of kindly nature, who later came over to make sure we were going to at least try and play chess on the 'historic' board on our table, really nice guy (Dad won when I surrendered my Queen in what I'd assumed were friendly opening exchanges - poor excuse I know!)   So what of the refurb?  Well, it is hard to tell when you haven't been in before so I shouldn't be too harsh, but I'm afraid this is BRAPA so here goes.  The smell of paint was perhaps inevitable, but still off putting.  The purple and cream colour scheme was most unpubby.   Watercolours for artwork were pretty lame.  The beer range of Hobgoblin, Doom Bar, Landlord or Black Sheep didn't seem to be part of a chain, which made the blandness all the more excruciating though having said that, the TT Landlord was very good.  And the little stereo plugged in to a wall looked like it had been left there by the plasterers/builders.  Listening to the locals (a spirited bunch), they seemed to be convincing themselves it was a decent refurb, very much like my recent fly-by-night visit to the Grapes in Liverpool would suggest.  So this is why Weighton Whippet may have been a more valuable pre-emptive than I first realised.

It's been a crazily unproductive month for BRAPA as you know what with Melbourne and being a Best Man, I'll be trying to "hammer it" in November to compensate and I'll go into more detail on that in my month end review/preview tomorrow/Tuesday.