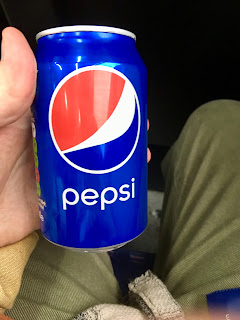 I always try and amuse myself where possible during this pain-staking process of trying to visit every pub in the Good Beer Guide.

I took a bottle of Oral-B mouthwash to the village of Thoralby.  I took a Pumice Stone to Penistone (it could've been worse I guess), and tonight, I took a can of Pepsi to Shirland so I could 'do a joke'.

Sadly, tonight's pub was such a 'quirk fest' from start to finish, it didn't occur to me to fish the can of Pepsi from the bottom of my rucksack until I was on the train home.  FAIL!

As usual, I hopped aboard the 16:04 L**ds to Alfreton train and after the usual 90 minutes of agony (a bit like watching Hull City) I arrived a few minutes behind schedule and had to stride out across town to reach the bus station.

And yet again, that blind bugger with his funky white stick just got in front of me and blocked me off at the station exit.  He's doing it deliberately I'm sure, what a BRAPA crapper that man has become!

And JUST like last week, a 'Comet' bus was just departing the moment I arrived at what Alfreton calls a bus station.  Bugger.  But the next one was only 15 minutes away, and Shirland was just a quick 'whizz' up the road.

The fairground was in full swing, it looked high octane stuff .....


I decided not to cross the road and take photos of the folk (mainly teenage girls) enjoying the fair, for fear of being arrested and put on one of those registers, so kept my eye firmly on the prize and headed down the road past a toothless family where the pub was inconveniently located off centre.

Shoulder of Mutton, Shirland (1689 / 2662) was, for me, the favourite of my six outer Alfreton Friday night pubs, so glad I saved the best til last.  The bloke you see in the above photo gave me a friendly "arite duck" and then about 5 more 'duck' references just as I was getting served.  I ordered the one ale I could see the name of, pronounced it wrong, and as it settled, he said "give us a slurp and I'll top it up!"  It doesn't happen often, and always evokes memories of a scary pint of Guinness in Crediton in 2001.  This was about as perfect a Derbyshire local as you could get, evoking memories of the Shinnon in North Wingfield, as I turned to see crackers, a cheese board, cured meats and homemade chutney all on offer.  And eggs!  I always say boxes of eggs for sale are the sign of a good pub, but this was ridiculous.  It formed a wall between me and the locals, and only the number of teacups hanging from the ceiling were in higher abundance.  I had a limp cracker, but 'gourmet babe' (who I refused to take a photo of on wokeness grounds) spent about 5 minutes delicately getting the cracker/cheese/chutney ratio just right for her and her father.  A dog arrived, a local called it Killer as it drank some water, but soon the owners appeared and sat with me, revealing she was a 4 month old naughty puppy called Poppy (my second Poppy pub dog in a week!)  Poppy found some post-it notes, then ate a couple of beermats (only Fosters, don't worry) and Mr & Mrs Poppy chatted Derbyshire pubs with me, telling me the Stags at Wardlow Mires used to keep guinea pigs in a cage which they put on the food menu!  Does that pub know no end to its legend?  With Poppy yelping wildly, Mrs P finally took her out for a breather,  and I was just chatting with Mr P when the lovely gentle 'Slurp' barman came over, crouched down, and whispered to Mr P that the guv'nor was ill and grumpy upstairs, trying to sleep, and he'd asked if that dog could be shut up!  Uh oh, felt sorry for the barman cos you could tell he really didn't want to say anything, but had to, but Mr P could see that and it was all very amicable and well handled.  My cue to leave, wondering why BRAPA and pub drama always seem to go hand in hand.  Nonetheless, a superb pub I'd recommend wholly.


Of course, getting back to Alfreton was quite straightforward and I promised myself I'd do the remaining Micropub only if I had time before the next train.

Sadly, there was a direct L**ds service just 20 minutes away so despite the Prospect looking like a rather good prospect, I'll have to just hope that Poison one gets in the GBG instead.


Also, I had a VERY heavy day in South Derbyshire / Staffordshire planned for the Saturday, so best not to overdo it.  I'll tell you all about that in 3 parts soon, you've been warned!