BRAPA in ...... Staly-bridge over the River Die

Two and half years since my last visit to Stalybridge, and the two Good Beer Guide entries which made the 2018 edition had 'stood the test of time' to remain in the 2019 edition, so I felt it was high time I return to this magical town full of some of the more peculiar folk you're likely to witness in the UK.

A quick consultation of the BRAPA IOW (Index of Weirdness) tells us that where Altrincham is 1, Falmouth is 5, and Preston is 8, Stalybridge achieves an unhealthy 9 (crazy and obsessed with death).

Compared with recent Friday night jaunts to Alfreton and beyond, Stalybridge was straightforward, only a hair raising sprint along the underpass at Huddersfield to make the connection.

Seven bearded young men with posh voices and rolled up trouser legs shared one 330ml can of Beavertown Neck Oil between them.  Overheard snippets of their chat included lines like "I don't like ale that much, I buy it more for the conversation", "I'm look forward to a G & T" and "Best thing to do is order a scotch egg and a half".  I was convulsing, for I scarcely believed a stereotypical craft ale twat could have such an accurate real life depiction.

They did at least alert me to a strange incident on Marsden station, where a lady in a Micky Mouse top filmed a small insect crawling around a post for what seemed like an eternity ...... is Marsden really so boring? 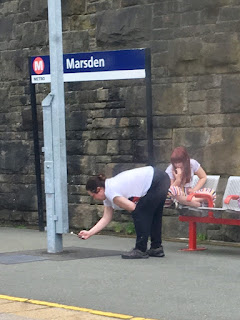 Once in Stalybridge, glad I could remember the general layout of the town.  Like so many unfashionable north western towns, it IS friendly, but the friendliness seems to be tinged with something else.  Is it a mild sense of peril?  A reservation when it comes to strangers?  A curiosity?  Perhaps it is just fear.  It is quite unique anyway.

A short walk took me to the first of the evening pub duo, down a piss stained alleyway into a cobbled precinct stood, you guessed it, a micropub. 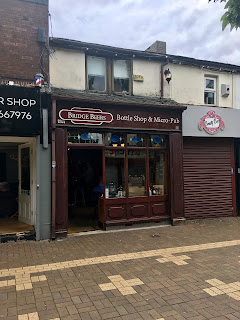 Bit of a weird set up for the first time visitor to Bridge Beers (1698 / 2671) with a makeshift bar which was actually a bench, all that divided our lugubrious host from his customers with the ale casks in the main room.  Took me a while to fathom it out, especially as that common micropub feature of 'dog on lead hampering your progress' needed careful negotiation.  Eight ales were listed, but he tells me four are on.  "They are all pales" he barks.  "Ah, probably wise in this recent heat" I remark, trying to 'offer' something.  "NO!  Just a delivery mix up!  We always have a dark on!" he bites back.  Jeez, sorry I tried!   Perhaps no surprise a few minutes later that a local says to him "I came in here for cheery banter, and you are sat there reading obituaries!"  It made sense.  If my initial impression here was of a rather uninspiring micro, I realised I'd been harsh once I'd had chance to settle, with some nice old furnishings, beermats for beers you'd ordinarily find stuck to walls, and quite an authentic pub atmosphere.  The star of the show, and very much my saviour, was a quirky old lady with a shock of dyed red hair.  Receptive to any route into conversation with the locals (unlike the blokes at the 'bar' who'd closed ranks), she's telling me how to keep cool on nights in this recent heatwave.  From putting a towel in the freezer and then wrap yourself in it, to wearing wet socks in bed, she had all the answers, and was soon on about the loose morals employed by her previous workplace Brighthouse (where druggies and students buy sofas for £1 and pay it back at 7,000,000% APR).  She gave me the lowdown on my next pub, and sent me off in the right direction ....... 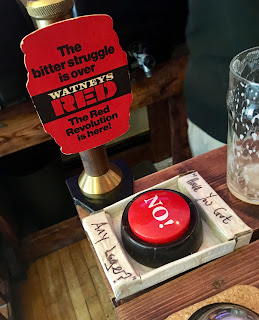 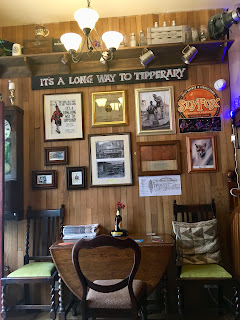 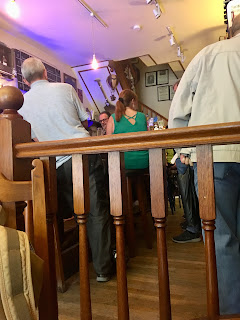 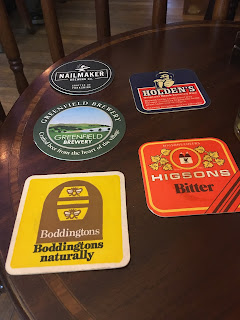 It was only a five minute walk in truth, and was a really long building reminding me a bit of the old school next to where I live.  It had a Bass sign, and a chippy attached on the left hand side ...... 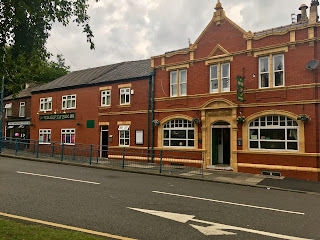 And you know when you cross a mosaic threshold to get into a pub, it is going to be good n proper!  Yes, the Wharf Tavern (1699 / 2672) was a characterful no-frills boozer, so much in the mould of what you'd expect from Stalybridge, perhaps only the nearby White House beats it for insanity.  £2.60 for one of the best pints of Copper Dragon Golden Pippin I'd had in years, one of three beers on, "let it settle!" she warns me, and I wasn't sure if she was planning on doing something, or I was just to stare at it like a weird beery lava lamp for the next 5 minutes.  I did the latter.  Ah yes, Dad had told me about his visit to the pub where he was sure the attached chippie was a cover for some drug dealing ring based on the amount of shady shifting between the two.  "He could be onto something" said the red haired old lady when I mentioned his theory in the last pub.  Friday is very much fish day, and there were lots bringing their food in here from next door.  It caused one family argument as one lady in a flowery dress says to her husband "Yeh, but if I get mushy peas and you get chips, you'll want some of my peas, but I won't want any of your chips.  Arrgggh!" and when he leaves the room, she says "ugh, men!" and the 58 barmaids squashed behind the bar all agree.  Another thing our old crone from the last pub said was that this place had a bit of an obsession with death (which felt a bit pot calling kettle when you think back to 'obituaries' gate).  Next thing I'm hearing, a lady telling a bloke "I were with her when she died, I'd been putting cream on her face and arms".  Always good to be moisturised in the moment before you snuff it, I guess.  "But I'm only going to her funeral if I get properly asked!" she warned.  I sat by a mirror observing most of this pub behaviour in reverse, which seemed right for a pub experience such as this. 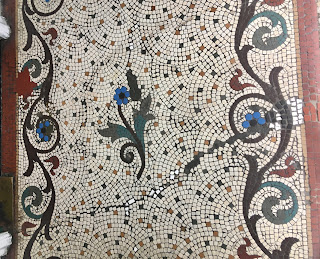 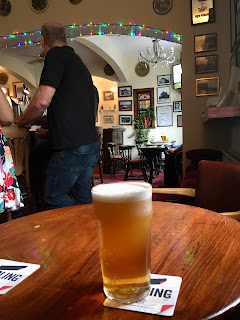 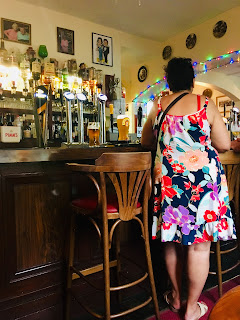 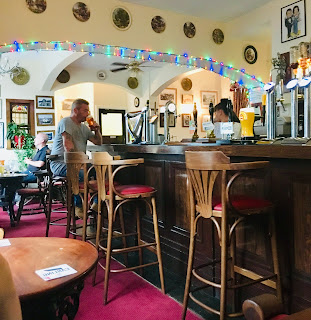 A train back towards York was imminent so no time to call into the Station Buffet Bar for a 4th time in my life, a shame because I might've actually been sober enough to enjoy that wonderful place properly the first time.

Still, I had a heavy day in Newark planned for Saturday which I'll tell you about in a rushed hazy one parter, so perhaps best that I did get an early night.