You can't exactly sidle up to a stranger, brandishing your Good Beer Guide, and breathe in his/her ear "what colour do you highlight in?"  It'd be strange, perhaps a bit creepy.

Yes, if you read part 11, you'll know I was trying to weigh up whether a guy who'd been drinking alone in the excellent Halfway House, Polbathic, was indeed a pub ticker like me.  He was now on the same train as me, different carriage,  heading east from St Germans towards Plymouth.

I alighted at Saltash, the last Cornwall stop right on the border with Devon.  If I was a betting man, I thought at the time, I bet he doesn't.  I'd guess he'd done the famous Union Inn at Saltash years back and was probably off to some Micropub in Plymouth that only opens 4-6pm on Sunday.

My instincts were right in that he stayed on to Plymouth,  sad, will I ever see him again?

And I know I said a lot of rude things in Part 11 but it was all tongue in cheek, I'm sure he's a lovely man and us tickers have to stick together.  'Unity, as one we stand together!', as punk band Operation Ivy once screamed in their seminal pub ticking concept album.

Time to re-focus.  And nothing like a ridiculous drop down a steep hill to get your mind back on the job in hand.  What a fantastic pub location this was going to be.  Right at the bottom of the Royal Albert and Tamar Toll Bridges across the River Tamar into (spit!) Devon.  (that's one for the locals).

The class act Isambard Kingdom Brunel built at least one, and it was his mural I came to first..... 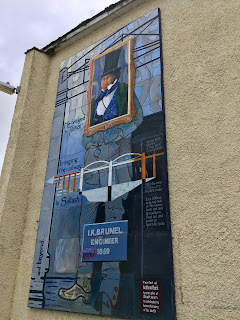 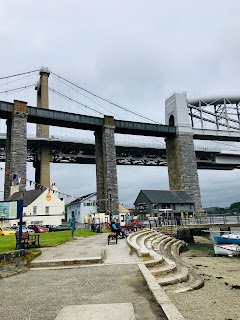 And in their shadow, what must be one of the most striking inns in the country ....... 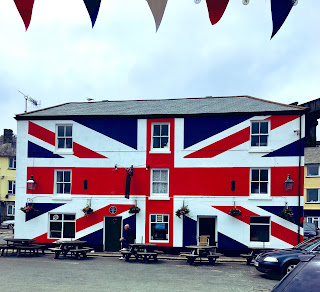 I simply love the look of Union Inn, Saltash (1660 / 2632), remembering it clearly from 'Strangest Pubs in Britain', the first book I got about pubs, and I think, without realising it, shaped my curiosity to visit all these weird and wonderful pubs in the land.  But I'd wrongly assumed a pub as striking as this near famous bridges and water would attract diners, families and non pubby types like fire flies.  How wrong I was.  This is one of the most deliciously mean and moody boozers I've been to this year, and that is a LOT of boozers.  "No kids in the bar!" "Cash only" "No food" screamed the blackboards.  So no surprise, I walk in to a quiet, relaxed pub, just a few stubbly old men drinking.  The barman looks about 16, and eyes me with a mixture of fear and terror.  I order a pint as normally as I can(!) and it soon becomes clear it is his first day, and he's not too confident when it comes to pulling the ales through.  A goodwife who looks like she has been here since 1750, barnacles in every orifice, probably, offers him some words of encouragement and without trying to sound too patronising, I say "looks great".  The 'no kids in the bar' sign didn't extend to the whole pub, plenty lurking the other side of the 'dividing line', one was smashing blackcurrant Fruit Shoots down.  "Me and yer mother are going out for a cig, you can stay 'ere if you want!" says Dad to the poor kid who is only about 10.  He indeed stays, and in one of the weirdest moments of the day, 'Street Fighting Man' by Rolling Stones starts playing on the jukebox, he gets up, and starts flossing wildly (and I don't mean between the teeth!)  Pubmen of the future are made in pubs like this. 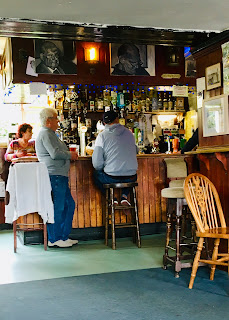 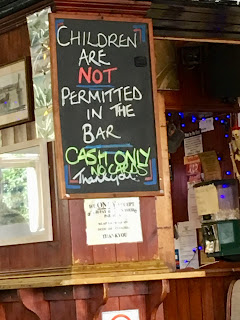 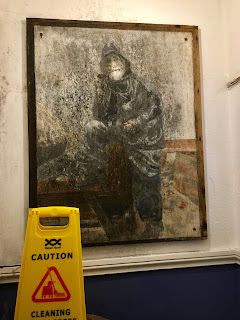 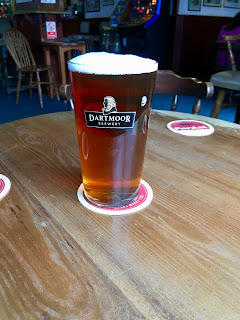 My GBG told me that there was a pub listed under Plymouth in Devon at 'Saltash Passage', and I realise it is just over the river.  But how to get there?  I start frantically Googling 'Saltash Foot Ferry' but realise it hasn't run since 1961.  Oops.

I say farewell to the smoking absent parents and start trying to climb up to the Tamar Bridge and get across.  It takes me a while to figure it out, but I eventually find the pedestrian and cycle paths and in drizzly rain, I head up, down and around.  No shortcuts I can see so it takes longer than it should ..... 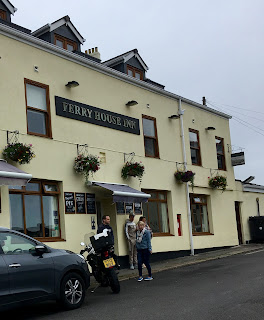 Ferry House Inn, Plymouth (1661 / 2633) was absolute garbage, there's no point dressing it up any other way.  I had decent hopes for it, as a few tracksuited locals hovered outside and after the above photo, nodded and made vague jokes about 'not looking their best' or something equally true.  It was a two roomer, so I headed through the left hand side marked 'bar' but this was just as twild and dining led as the right hand room, which I went to by mistake later looking for the loo.  Everything I'd been worried about finding in the Union Inn but didn't was true of here, now that my guard was down.  Typical, just typical!  There were two drinkers at the bar, the older bloke nodded but the young one just stared at me throughout.  Then he pointedly offered his chips around the pub, to everyone but me, and did he really dip one in his Fosters?  Surely not.  The beer choice was pretty much Doom Bar or Doom Bar, but it was well kept, much better than my last most recent 'Doom' in York's Rose & Crown.  There was absolutely no where to sit, I wasn't welcome at the bar, and even if a seat had become free in this horrific atmosphere, I may've declined.  So I joined the smokers outside, perching my pint on the pub window ledge.  Then, a mystery man on a motorbike pointed it at me.  He had what looked suspiciously like a L**ds United badge on his helmet!  This was NOT going to be my pub of the year experience!  But there was a chink of light when I saw the barman, who'd been semi-friendly, returning from a cordoned off seating area by the river.  I asked him and sure enough, it belonged to the pub so I sat there.  The fact I could see the wonderful Union Inn directly across laughing at me from across the Tamar just added to the ignominy.  Two smokers joined me, just so they could blow smoke in my face and tell me it was slightly raining and not great for sitting out (I know, dickheads!)  Was happy to NOT take my glass back, and get on my way!  Shit experience. 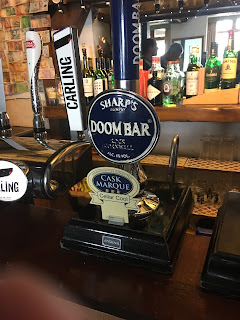 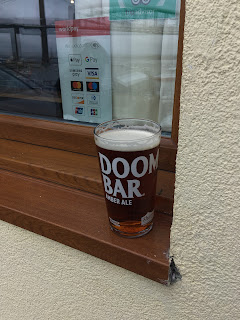 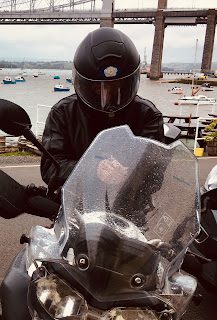 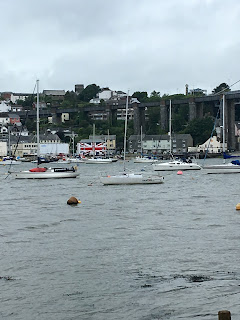 Now I don't know if there is a rivalry between Cornwall and Devon, but if there is, this had been a perfect advertisment for Cornwall being the superior county.  As someone a bit Cornish said on my Twitter "that's what you get for going to England!"

I walked back to the local St Budeaux rail station, where after a long wait, I got back to Plymouth.  Now I could've rushed to try and get a rushed pre-emptive Plymouth tick in, but I figured I'll be back here in 2020 so I got a coffee and kit kat, live streamed Women's World Cup, and thought it expedient to get myself back towards my Quintell 'home' as quickly as possible.

Plenty of time too, to revisit Royal Inn, Par which had been one of my least convincing Cornwall debut pub ticks of 2017, and was not surprised to see it binned from the 2018 GBG.  Back in this edition though, I was glad to find better ale and a happier more relaxed pub atmosphere, where a bit like in Falmouth, a Mum was beating a Dad at pool, absolutely loving it, whilst embarrassed kids looked on in disgust!

Back in Quintrell Downs, it seemed to make sense to get a very unlikely pre-emptive tick done in the form of Treffry Tavern.  It is where I'd had my Premier Inn breakfast each morning, has a couple of handpumps, so I'd be kicking myself if it ever got in the GBG and I'd never had a drink here! (I don't know if freshly squeezed OJ, cranberry, tea and coffee count!) 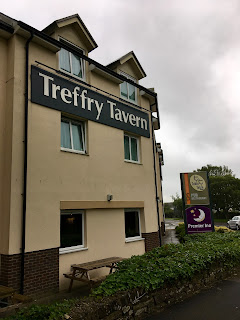 At least the barman recognised me, and swinging my Spar bag of food by my side, I felt as much like a 'local' as I've ever felt in a Cornwall pub.  My pint of St Austell Tribute (a beer I always enjoy) was decent, tiny bit furry like they'd dipped a gerbil in it briefly before giving it to me, but it is hard to get Tribute too wrong.  The only other couple in ate a meal (looked a bit like Gerbil and Chips), the man asked his wife if they could swap seats so he could watch the utterly appalling Soccer Aid football match, probably the saddest request of the holiday I'd heard.  Yeh okay, I kept glancing up at it, but not by choice!  Soon, they had been distracted by the fruit machines.   All good. 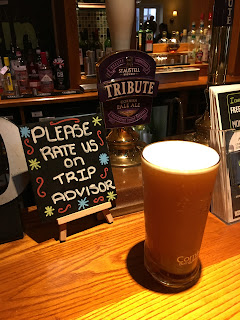 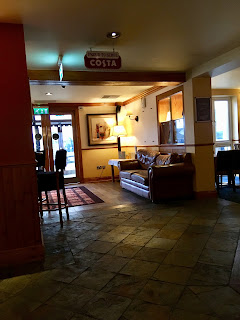 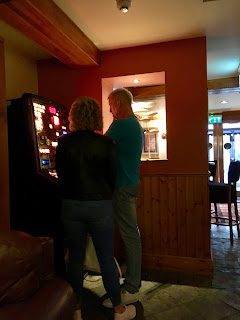 Back to my room then, as today would be the final day of the holiday and I had ticks to get done.