BRAPA and ..... Porthleven is a Place on Earth (Cornwall Part 9)

When one time punk rocker and State Brewery Bitter lover Belinda Carlisle sang the above hit, I'd never been to the coastal little resort situated 'twixt Penzance and Helston, but I can now report it was one of the most beautiful places I visited in Year Three of my Cornish Adventure.

Hard to do it justice, even in a rare BRAPA panoramic attempt.  The locals were distracted from my gawping tourist attempts by the sight of a fire engine driving around the harbour.  You should've seen their gawping fish like faces. "I wunderz what thaat's all about then?" they kept saying, as though a fire engine in Porthleven was the highest level of drama ever seen here.  Perhaps it was.

But I had no time to stop and stare, I was of course on a pubby mission.  And this was one of the two pubs which eluded me in 2018, this one had remained in the Guide despite previously having only featured in 3 previous editions, including the 1974 one.

I sped past Rick Stein's plaice, and saw some beer barrels so knew I must be close, it was actually peering out at me like a perv in the park .... 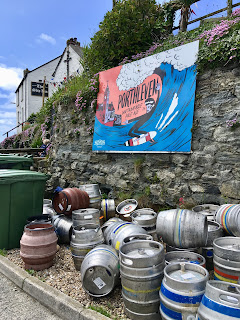 It was high atop some perilous looking steps right on the ocean's edge, an ancient quite wonderful looking inn ..... 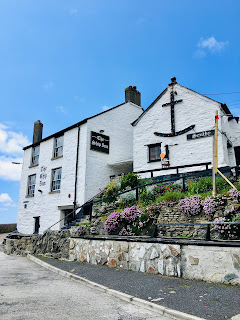 And I'd have to add Ship Inn (1655 / 2627)  to the ever expanding list of pubs that have made me go 'wow' on this holiday, along with the likes of Admiral Benbow, Dock Inn, Blisland Inn, St Mabyn Inn and Hole in the Wall, Bodmin.  Problem was though, 'beer quality', quite a hard thing to overlook I guess.  Driftwood Spas tee shirt or not, the ginger wiry barman was top class, and I ordered this thing called 'Surf Bum' and was enjoying muchly it til he jogged over, and whipped it away from me, telling me it was cloudy and he didn't want to serve me that!  Top staffing, I thought.  I'd just assumed it was unfined or some shit.  For a replacement, I went for the Porthleven ale you can see on the board outside the pub which I'd had before in Newquay and seemed nice.  But on this occasion, it had that 'farty' taste like it had something a bit wrong with it, but stupidly, I suffered in silence! The pub's interior was stunning, it had that salty seadog centuries old atmosphere that the Blue Anchor in Helston does, great decor, very much a 100% pub!  Spoiled only slightly by a couple from West Sussex (always attention seekers, West Sussex folk) who were Skyping her ailing mother.  The gist was they were setting up a new life down here in Cornwall, and breathing difficulties or not, mother would just have to get herself a doctor's appointment, take her meds and behave, or she'd end up in a home!  A local called Roger who may have been the alien from American Dad in disguise chatted amiably with barmaids in short shorts, he sure didn't mind being a 'space invader' (this pub's term for a bar blocker).  I'm of the view that if they get this beer sorted out, this could be a contender for best pub in Cornwall - and yes, I'd love to come on a stormy Tuesday afternoon in November when the waves are crashing round the pub walls! 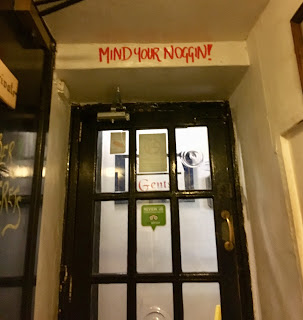 The sun was out and it was actually warm for about the only time this week, and just as well because I had the most epic walk of the holiday next, and this bit was to prove to be my most abiding memory of the week.

I climbed out of Porthleven, joining the SW Cornish Coastal Path in search of another GBG tick just over three miles away.

This really was the best spell of weather, perfect timing, as I managed to take FOUR wrong turnings and had to overtake the same old couple three times which was quite embarrassing, and had a real hare versus tortoise feel to it. 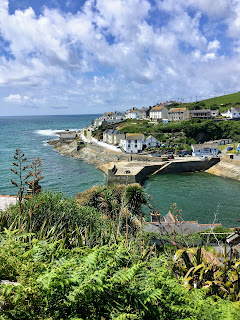 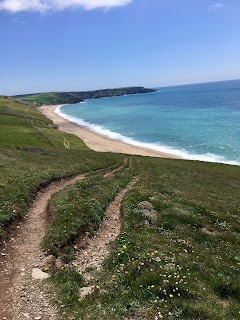 Coastal erosion meant two diversions had to be taken, and at one stage I was actually down on the beach.  I nodded to a hermit who was observing probably Osprey above, I stopped too, I love a good bird of prey and the power and majesty of them was quite something.

Ever wondered what a South African fan of my blog would call BRAPA?  Well, the next village I came to revealed the truth ........ 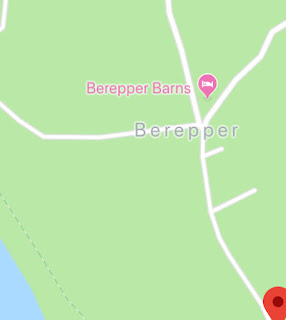 And I knew I was finally in the right place just a few yards further down as someone had drawn a village mural in a bus shelter even though no buses stop here .......... 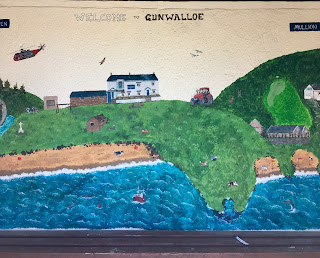 Finally, the pub appeared and I was excited, for there was a high sense of anticipation here, as this centuries old GBG regular (til recent years at least) was named after the Cornish for 'cliffs of hell' and is made out of timbers of old shipwrecks ....... 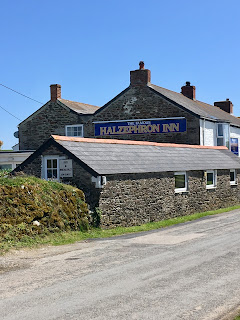 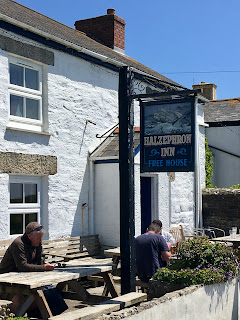 So what a crashing anti-climax the Halzephron Inn, Gunwalloe (1656 / 2628) was then!  Everyone was just so miserable, also reported by my friend from York who'd been here with his Mum just a day earlier.  Stunning location, slow pace of life, what was not to love about working or visiting here?  Yes tourists, staff and locals alike all hated it.  The slightly sterile dining feel of the pub didn't help, and so little was there to see indoors that I was soon outside trying to cool off under an umbrella, realising just how sunburnt I was.  The other people in the garden, who soon left at the sight of my BRAPA motif, were all shivering in hoodies and seemed surprised by my rosy, panting state!  Before this however, a brief glimmer of joy as a Dad told his precocious twild that he wasn't allowed to sit at the bar because he wasn't 18.  "But Daddy, I'm 21" was his quick witted reply, and two old codgers almost broke out into a smile, but a barmaid with a face like a gala pie scowled at me for just ordering a drink so I was glad to get out.  Luckily, the landlord and his two red setters brightened the mood.  He, like so many good rural Cornwall landlords, resembled a farmer and had a happy-go-lucky air.  The dogs, certainly NOT twogs, took it in turns to try and eat my Good Beer Guide, before hurdling the low back stone wall and getting lost in fields behind the pub and barking for help!  My ale was decent but not stunning, and much of my focus was 'could I REALLY get back to Porthleven in time for the next bus back to Penzance?', sad when you've made such a huge effort to get to a much anticipated pub but that's life, for me!  On the plus side, the Porthleven ale (and pump clip!) was much better, unrecognisable from the same ale I'd had earlier. 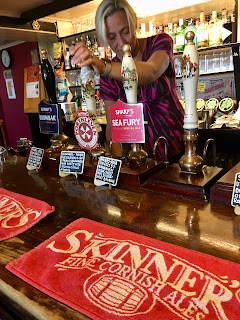 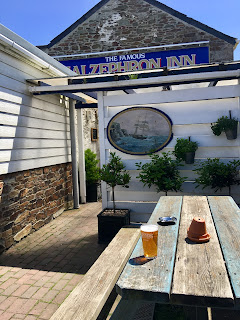 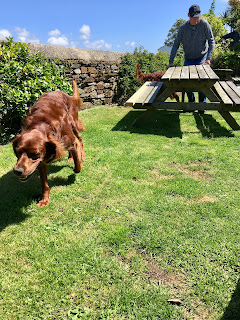 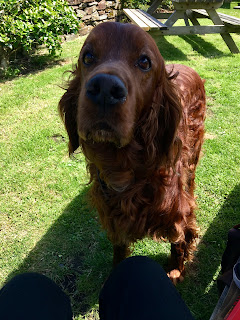 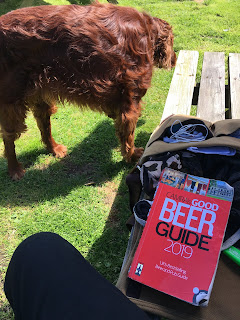 Incredibly, I'd actually learnt my lessons from the walk to Gunwalloe, and managed to take no more wrong turnings, striding out, overtaking anyone in my path, and yet in the baking heat, it was still touch and go whether I'd make the bus.

I dropped into Porthleven with sand in my shoes, needing a piss, and totally dehydrated.  Hopefully this bus would be 9 minutes late like every other bus this holiday?  Well no, sod's law this one was bang on time!  I'd found a public loo, and was just buying a bottle of water from an ice cream stall when the bus shot around the harbour.  I ran and just made it, and smiled all the way back to Penzance, pouring half the water on my burning face as a couple of Lancastrians looked at me like I was the weird one!  A low key holiday highlight?  You bet!

And in Part 10, I'll tell you how the rest of this eventful day unfurled.