I'm taking you on a walk through York, passing three old pubs, before ending up back at home for a nice cup of tea and a sit down.

The rules are quite simple, the pubs have to feature in my Directory of York Pubs 1455-2003, still be 'active' today (outside of this crazy lockdown, obviously) and they have to have been visited by the Chief Constable during his epic 'research'  (AKA glorified pub crawl) of 1902.  Think 'Bradshaw', but my clothes are brighter than those of Portillo.  We'll call it 'Murray'. 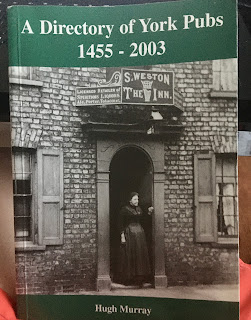 My designated 'person I'm allowed to meet from outside my household' Joe The Wedge deserves credit for this, reminding me how close I live to Rowntree Park, which was probably built for the local chocolate factory workers a couple of hundred years back in a Saltaire way, but you'd have to look that up.

We cut across through the hopelessly white middle class (even by York standards) streets like Thorpe, Russell or Scott (take your pick), where, by mid May,  the Thursday night 8pm NHS clap is little to do with appreciating the NHS, and more to do with keeping up with the Joneses and appearing more virtuous than your neighbour. 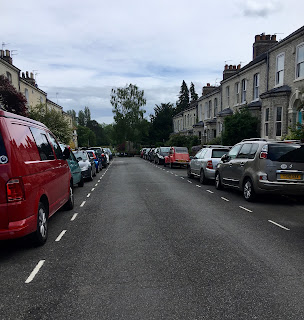 We cross the iconic Bishy Road (one of the top 10 streets in the UK, according to a national newspaper a couple of years back) and down Richardson Street where the gates of the park are at the bottom. 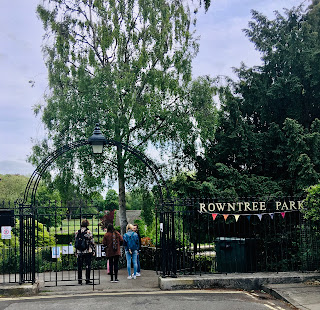 A bit like entering a pub in Central London, a gaggle of scarfed, rucksacked foreign exchange students block the way in, so I stand 2 metres back looking frustrated until they realise and apologise for their ineptitude and shuffle onwards.

I've not been in Rowntree Park since my sister lived down here a few years back, and that always seemed to be in winter.  In full spring bloom, it really is quite majestic and frighteningly popular.  Yes, things seem to be 'easing' a bit but I'm still a bit nervous by the sheer volume of people I see - probably the most since the flight back from Lanzarote back in mid March! 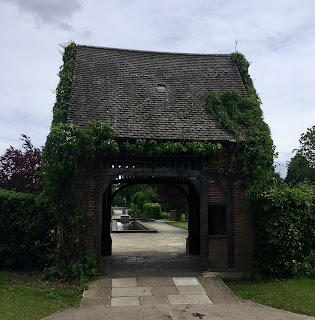 Through the little gatehouse probably made out of cast off chocolate buttons, and straight on past all the little water features full of mottled ducks, old folk and statues.  It is early Saturday afternoon, I should be in a pub at this time of the week more than any, so I need this little 'mission', power walking quickly away from the lingerers to take the mind off the demons. 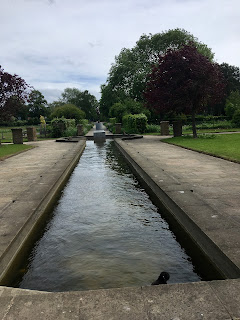 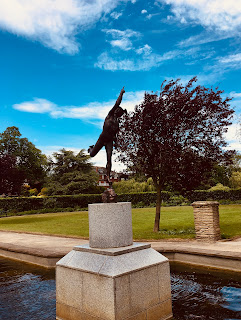 We carry straight on as far as we can go, and then turn right through a small gate, which leads to a walk way covered by trees, shielding your poor delicate skin from the sun ...... 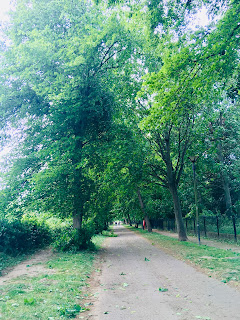 At the end, you'll see York's Millennium Bridge which was probably built around the year 2000 (I should be a tour guide), so we get ourselves up onto it and cross the River Ouse, right to left ...... 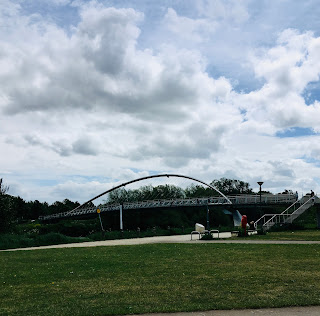 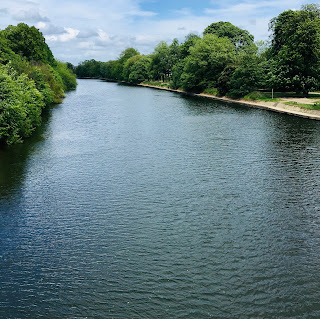 If we carry straight on, we'd end up in Fulford where I went to school, or eventually Heslington, where I first lived when I came to York, in the midst of studentsville.  I couldn't get to sleep one night cos a boy was on an adjoining roof singing Sit Down by James and drinking Castlemaine 4X.  I vowed I'd never go to Uni at that moment, but I did of course.

Instead, we turn left so the river is on our left as shown on the right of the above photo (if that makes any sense, like!)

It is a ridiculously windy day despite the sunshine and mild air, and huge branches, twigs and leaves are strewn everywhere. 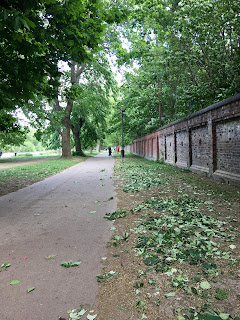 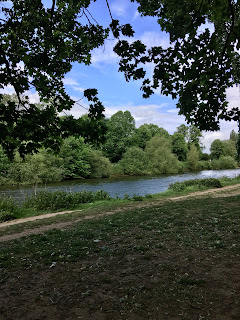 I see two coppers and try to look like I'm not just lurking around taking photos for a blog, but I honestly don't think anyone cares anymore, though ideally they're off to Rowntree Park to arrest those students.

It's a good stretch this, as we head north towards the city, crossing the tiny Blue Bridge, so called because it is a bridge and it is blue. 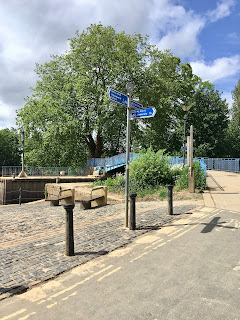 Hugging the riverbank as closely as we can without falling in, we come to St George's Field Car Park where Derek Acorah once was supposed to channel Dick Turpin from his graveside (Dick's, not Derek's) in a live Most Haunted Hallowe'en Special but gave up cos the weather wasn't very good.

Carry on under Skeldergate Bridge ...... 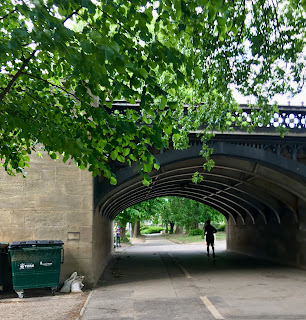 ... and carry on along the path with river still on left, Tower Gardens on your right and it finally becomes what is known as King's Staith.

Bit of a flashpoint here as an ambulance and Creamy Wayne's ice cream van form a kind of blockage, made worse by a huge flock of greylag geese looking quite angry, meaning people have to shimmy through the gap, making the 2 metre rule rather hard to observe! 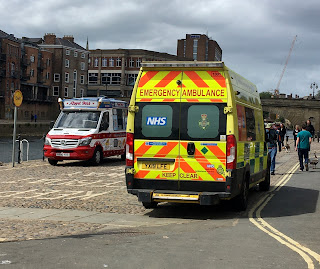 We squeeze through, and the first of our two pubs looms large on the riverside ........ 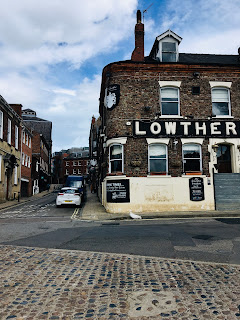 The Lowther is a real kind of 'rites of passage' pub to the York students and yoofs, and 1998-2001 was my era here, always in here on a Fri/Sat, mates puking in the river at midnight, slush puppy cocktails, gravity defying staircase, and in the early days at least, was a bit of a 'rockers' pub and I remembered following a bloke with a bright green mohawk in on my first ever visit.  Decent jukebox for a while too.

Before you get too old, you realise how shite it is though, and recent visits have been desolate affairs, and as me and my mates asked for the one real ale, they disappeared into the street, and brought it back from Lil's next door!  Problem is, we all arrived separately so they had to make four separate journeys. I tried to apologise but the barman said he was 'glad of something to do'. 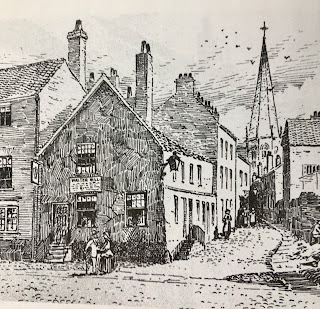 Back then, it was part of the notorious 'Water Lanes' part of the city, full of horrid men with knives, hookers on every corner, pirates and criminals.  A bit like Wrexham today, perhaps, and a year after the above drawing, the Crown & Anchor and the whole Water Lanes area was demolished, and in 1884, the Lowther was built on the same site.  In 1902, our mate the Chief Constable came for a visit and loved the fact there was a billiard room on the top floor and that you could get food if you asked nicely.

Simply glance to the left and you'll see pub two, the Kings Arms, famous for being the one that features on every news story every time York floods, which is several times a year. 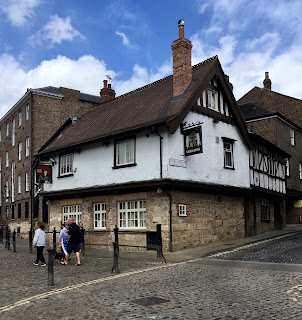 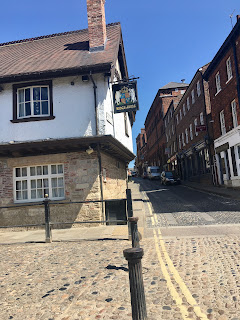 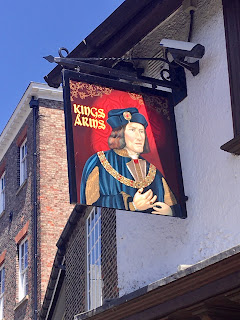 As Sam Smith's pubs go, this must be one of the weakest, certainly in York.  The lack of handpulled OBB doesn't help, but isn't the sole reason, staff are often miserable, the indoors has zero atmosphere, and is only really popular for the cheap prices and extensive riverside seating.

It's been a pub since at least 1783, though in 1867, the silly licensee Mr Duckitt renamed it The Ouse Bridge Tavern which just doesn't sound right.  The name stuck til 1974 when it went back to being the good 'ole Kings Arms just like nature intended.

In 1902. the Chief Constable must've been surprised just how many rooms there were, 3 bedrooms, club room, bog, kitchen, taproom, dram shop, smoke room, flippin 'eck, seems pretty poky on my visits so a few walls must've been knocked together. 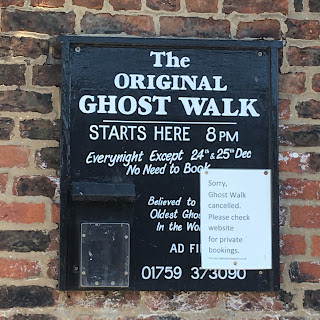 For our final pub, we head up the cobbles of King Street to the right of the Kings Arms, studiously glossing over such delights as Stone Roses Bar which didn't get a Chief Constable visit (he felt that Fools Gold was a self indulgent meandering beef stroken-off of a tune) and we cross straight over Castlegate which is Coppergate (you need a degree to remember these York street names). 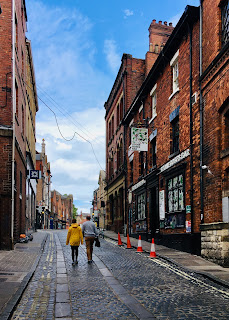 Our pub is situated a third of the way down on the right hand side ...... 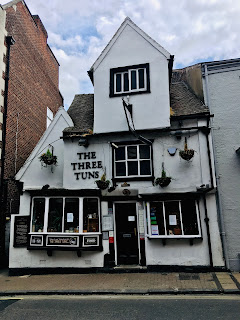 I've always had a soft spot for the Three Tuns, though I can tell when I go out with friends they don't quite have the same enthusiasm for it that I do!

True, it is a pretty miserably staff fronted Marstons, average beer quality, over priced, but something about the wonky floors, the warped old beams, the long thin interior, that means you can really appreciate the hubbub, as long as no nobheads are present as it does get its fair share of racegoery drug taking Christimassy jumpered staggy hennie geordie smoggie monstery tossery fuckwits if you go in at the wrong time, being quite a prominent building in a central location.  Midweek evening in late Jan is your best bet.  Oh, and the front of pub near door is more atmospheric than further back, which is quite rare.

My book tells me it first got a mention in 1783, just like Kings Arms, but our old mate the Chief Const was fuming in 1902 cos it had a six day licence, AND closed early (imagine if he'd lived in the micropub era?)   It was 1960 when it started opening full time and it is Grade II listed of course, like Kings Arms, and so it should be.  Sometimes, it got called Thackwray's when it was what'd now be called their brewery tap, from 1898-1929.  Just so you know. 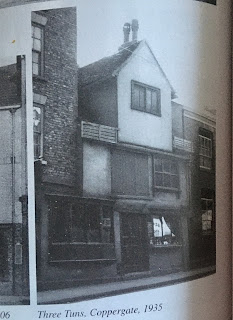 A good 45-50 min circular route in total, carrying on back to my part of York, and the good thing about it, I could do this same walk several dozen times and show you 3 different York pubs, though am kind hoping lockdown will be over before I get chance to do too many more of these!

If you made it to the end, well done, thanks, you must be mad, and here's to getting in some open pubs before too much longer.