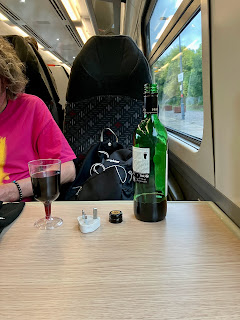 (LAST BLOG ON BLOGGER, actually wrote this before Edinburgh when the photo upload was just about bearable).  Join me on Wix from tomorrow (link at the bottom, as the kids say).

'Bottle of red for breakfast?  I'm not judging (apart from the obvious Wotsits oversight).  Mr Pink Shirt looked like a Levellers fan, and he had to neck his final glass as we pulled into Newport.  Having found a 10am opener, I was reassured to find someone drinking earlier than me.

Yes, I was back in the town that Gwent nearly forgot.  I was aiming for the same kind of strategy that had garnered six ticks yesterday.  Do a couple in town, and get a bus out to the villages.

I was getting the impression that Newport was a proper drinkers town.  As I peered through a few steamy windows, the only folk smiling were those with a drink in their hand. 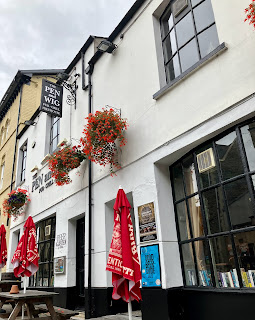 Up a colourful (for Newport) sloping side street, the windows lined with old books, I was expecting the Pen & Wig, Newport (2431 / 3995) to be sweet and quaint.  But not a bit of it.  It was a moody, sticky tabled, slightly divey basic boarded pub.  A surprising number of unusual ales on, but when I see that magic red triangle, all bets are off.  It is the #PubMan way.  Never touched the stuff pre-2014.  The Bass here was not as scintillating as in Abergavenny's Station Hotel, but I'd still put it slightly above halfway in the Bass league table, pushing for a late play off place but losing a key player to injury in April.  The soundtrack was very late nineties which was a nice gear change from the lazy Britpop throwback you get in far too many places, but with the constant threat of Cliff's Millennium Prayer, the Vengaboys and Martine McCutcheon hanging in the morning fug, threatening to bring the Wig into disrepute at any perfect moment (thanks!), I decided not to linger (which would've been a great Cranberries pun if they'd only held on a few years).

Still in the GBG? It is, I get the feeling it is probably a regular too.  Always the best type of tick. 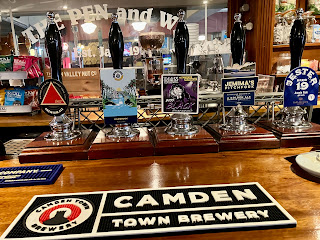 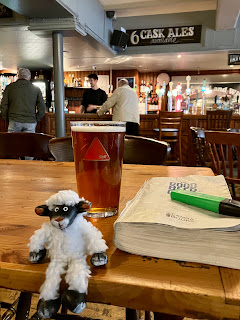 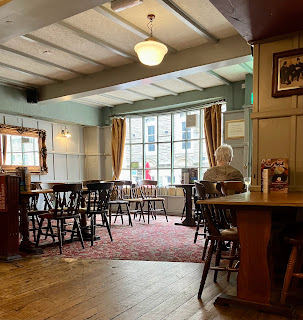 Time to get myself aboard a bus in a Chepstowy direction before my bladder filled up too much.  Plenty of ticks to be had in this southern section of Gwent, and at 11.62 precise miles out of Newport, this was my first stop. 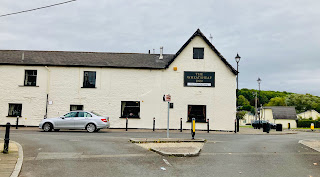 Quite a grand looking place from a distance, the Wheatsheaf, Magor (2432 / 3996) didn't stand out as particularly special on my visit.  It did at least have a smidgen of soft furnishings and warmth which were lacking in the Pen & Wig.  'Swerve Oakham Citra, get punished' has been the message coming through loud and clear so far this year when I've shunned Peterborough's finest in favour of something more crafty (or Whitstable Bay).  So no way I'm avoiding it here.  Great pint, canny guv'nor, but the so-called child drawing certainly had the hallmarks of an adult trying to passing itself off as a child!  Weird behaviour.  See pic below, and let me know what you think.  The words probably are by the child, but the cat facial features make me suspicious.  I reverse my arse into one of the cosier spots facing the bar, perhaps too cosy as a local lady is having lunch for one and I nearly end up with a bum full of sausage & mash.  After a while, we get chatting.  She seems to think I'll have empathy for her Magor woes despite having a 'Good Beer Guide' and a mascot sheep on my table, and is going on about local road trials and tribulations.  "Someone drove between 10-17 mph in front of me all the way here, how do you think that made me feel?!" she complained, in one of the most unanswerable questions ever.  The only other customer around this side is a nervous pint drinking man.  When his phone rings, he jumps.  It is the wife.  "Sorry luv, really have very little signal out here, crackle crackle crackle, nope you're breaking up" he says, before hanging up, downing the rest, and rushing off.  And so must I, a bus is imminent.

Still in the GBG?  It is, deserves it for that Citra alone. 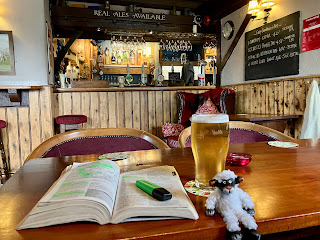 Next stop out east, don't go crossing that border into BORING England, is Caldicot.  The pub was errrm, quite astonishing! 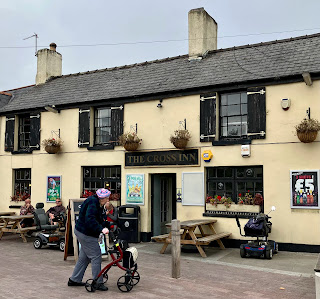 With shopmobility's and walking frames dominating the frontage, I should've been prepared for the step into the twilight zone which was the Cross Inn, Caldicot (2433 / 3997) - all eyes turn on me as I enter, I try to smile warmly around the room, but I'm inwardly taken aback, I hadn't been expecting this level of local Welshitude.  For a pub like this to make it into the GBG is increasingly rare, more's the pity.  Dartmoor Jail Ale (in a Doom glass) is the only cask on, and nowt wrong with it, as I realise I've got no choice but to sit in the centre and immerse myself in Cross Inn culture.  A dividing wall / fireplace seems to contain just as many crazies behind me.  I'd say the place has a WMC atmosphere, but it is more 'charged' than that. Even the folk watching 'Doctors' on a giant plasma are doing it with quite a degree of passion.  Everyone has 2003 Nokia phones, with polyphonic ringtones, 'The Good, the Bad and the Ugly' theme being the most popular, and the most apt.   A gnarly bloke with a face like the planet Mars walks up to a man sat at a table, "I've just seen yer da' Geraint, he's looking well for 83" but the man he is addressing looks 83 too.  Strangely falling in love with this place, more rewarding than the previous two, much more life, even if a lot of the life was close to death.  Superb.

Still in the GBG?  Nah, binned off in favour of a brewery tap room!  Sad, but not surprised.  Beer guide, not pub guide, or so they say. 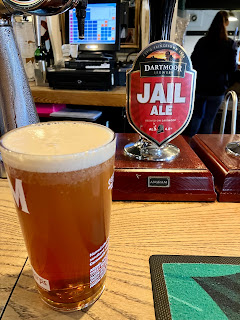 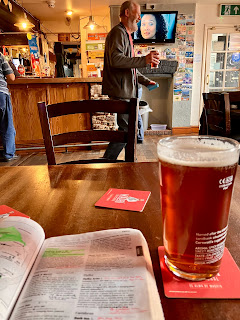 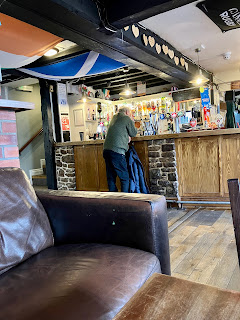 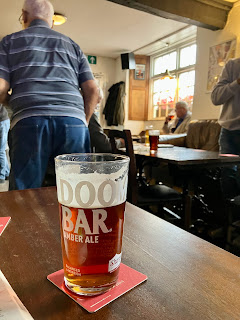 See you all over on Wix!  Address is going to be https://simeyeveritt.wixsite.com/brapa