Exhausted by my Porthleven/Gunwalloe adventure earlier on, I realised I just had TWO pubs to do in the 'central-west' part of Cornwall to complete it.

It really had to be a case of 'get to the pubs first, worry about the consequences later' otherwise I reckon I'd have talked myself out of doing both of them as we moved rapidly towards Saturday evening.

From Penzance, I changed at Truro for the branch line down to Falmouth Town for the easier of the two.  It was a hive of activity, and I feel a bit silly for admitting this, but I didn't realise a Sea Shanty Festival was on until I was told on the train out of here!

I swear down, I just thought this level of singing, drunkenness, people spilling onto platforms and mile long queues outside chippies were just standard Saturday night behaviour in Falmouth!  Well how was I to know?

The pub was on a hilly side street, up some steps and a drunk bloke outside said "ayeeeeee" as I took the photo and made my way towards the entrance.  It'd be a sign of things to come. 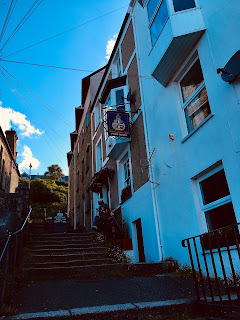 Yes, Oddfellows Arms (1657 / 2629) lived up to its 'Odd' name with a crazy but very happy scene, the other extremity to the one I'd witnessed earlier in the Halzephron in turns of hubbub and good ole' fashioned pub atmosphere.  Verging on the intimidating, I must admit, I hovered around the bar praying that I wasn't getting in the way, as it was wall-to-wall with drunk folk.  A group of ladies started singing a sea shanty.  People joined in.  I still didn't twig.  At this point, someone could've walked in and threatened me with a Fisherman's Friend, and I'd still have been oblivious.  Though admittedly, nasally clearer.   I just thought this was normal Falmouth behaviour and this was perhaps more of a locals rough boozer than yer Beerwolf Books and Boathouses of this world. Despite the barman taking time to pull through my Sharps Atlantic, commendable under the circumstances, it was still dreadful.  I thought I'd found 'half a small table' to perch my glass on, but saw a bloke had his smoking paraphernalia on it, so quickly apologised.  "Don't worry mate, I'm going now" he said.  So I hovered some more, and 5 mins later, he's still there, meticulously rolling about his 50th cig for the road.  I lost patience and went to the 'quiet' back room, where a Mum and Dad were playing pool.  Watching on was their over enthusiastic dog, Olly, who slobbered all over my jeans and made me feel sick, but I tried to look 'dog friendly' as it felt like I was invading a family gathering.  "He's REALLY nosy!" squealed Mummy Pool with delight.  In the corner, their bored teenage daughter tapped on an iPad and looked embarrassed by her parents.  I kept murmuring 'move me if I'm in your way' and I STILL had no table to rest my dreadful beer.  Mummy Pool won 2-0, Daddy Pool pretended he didn't care but was internally furious, and Doggy Drool drooled some more.  Happy to leave, after a VERY good wash of my hands and wipe down of my jeans.  Puke.

On the predictably packed little platform at Falmouth Town, I thought I'd done absolutely amazing to be one of the first ones on.  But then I was joined by the loudest twild group ever.  Their parents even said "I bet you were expecting a quiet journey back to Truro, we're really sorry!"

And then three rosy cheeked revellers, full of humour, got on and started chatting to me.  "You been down for the sea shanty festival then?" they asked, and roared with laughter as they saw the dawning realisation on my face that that's why Falmouth had been so errrm, crazy!

"You sit beside 'im" said one of the ladies to the bloke in a drunken Cornish accent.  He thought she said "sit by Simon".  They laughed.  "You're not called Simon are you by any chance?" they asked.  I admitted I was.  They roared with laughter again, but didn't believe me.

They had ale flagons but had run out so had nipped to the local supermarket and topped them up with cans of McEwans.  Quality!  I really bonded with the guy, and when we got to Truro, it was like saying goodbye to old friends!  Of course, I'd bored them with BRAPA talk. 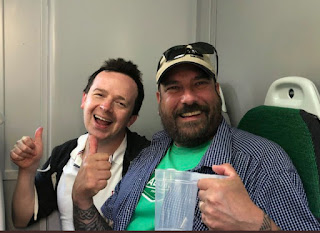 The night was drawing in rapidly now, but I had to not think about getting stranded, and instead think about this last pub.

Annoyingly, Truro Railway Station and Bus Station are a good hike from each other, so I instead got a taxi using my 'emergency fund', it wasn't far but time was certainly of the essence.  Having said that, a couple in the queue behind me were so pie-eyed, I took pity on them and let them take the first one (also I didn't wanna be murdered).

Taxi driver was a good guy but told me he thought I was mad doing what I was doing which is always a reassuring vote of confidence.  Did he want my fare or what?

My next pub was making its third GBG appearance,  previous entries were in 1981 and 1993, so you can't say its pedigree was exactly second to none .... and I ain't talking Marstons. Ho ho!

Still, a relief to be in the solitude of a small village down a country lane just south of Truro, and although the inn sign was a bit foreboding, the pub at least looked cottagey. 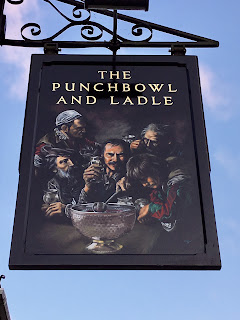 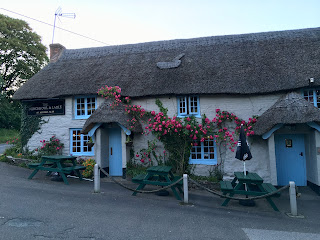 Punchbowl & Ladle, Penelewey (1658 / 2630) was, by all accounts, very much a dining pub tonight.  Not a characterless one, the building felt nice and old, sloping floors, low beams and carpets, warm, a few nooks and crannies into areas where diners fear to tread.  I thought a bloke was eyeballing me on arrival, but it was just a stone statue, possibly of that guy from Dad's Army, the posh one with the French surname, not Arthur L'Owe.  He wasn't, but the dining couple behind him were!  I walked the wrong way to the bar into a dining area, looked a bit silly, so OF COURSE I should turn round to see that the barmaid smiling/thinking 'what a wanker' is an attractive brunette.  I told her I was an idiot, she nodded empathetically, said lots of people did what I'd just done and served me an excellent pint of Proper Job.  Amazingly, and almost like retribution for the chaos in the Oddfellows, I found this cavernous snug, low leather settees, probably could seat about 8, but despite being here for an hour, not a single soul bothered me.  And this was despite a constant influx of potential diners occasionally sticking their collective head around the corner.  In the neighbouring room, spoilt American twilds were learning the joys of 'moules' from an old local lady.  Well, by this point, reality had kicked in and I got out all my BRAPA gear, making the room into a makeshift 'BRAPA nerve centre' plotting my route back to Quintrell.  It looked a dire situation, but with the statue of the bloke from Dad's Army willing me on, I found a bus back from Playing Place to Truro, a train to St Austell, and a connecting 'last bus of the night' through to Newquay, stopping in Quintrell.  Connections had to be met, I could afford no delay, but by god, I could do this without killing myself on taxi fares.  UP THE BRAP!  I left in a much more triumphant manner than I arrived in, think our brunette friend wondered quite what I'd been up to in the snug.


A 20 minute walk took me to this dodgy roundabout, or 'Playing Place' as the locals call it, where there's a quite unlikely bus stop, so I was delighted to see a seedy couple waiting for it too.

It was NINE mins delayed (surprise surprise!) but I managed to get off a bit closer to the railway station and strode up the hill to make the final train connection of the night.  The staff were out in force, tannoy announcements epic, the last of the Falmouth regulars arrived, even more pissed than the last lot (understandably) and a only a smattering got on for St Austell.  Fewer got off.

A few drunk lads on a night out gave each other Cornish piggy backs and grunted, but the bus mercifully turned up only 2 mins behind schedule for the long, dark, bumpy ride to Newquay.  All was quiet til we came to a pub on the outskirts and a group of screeching young ladies bound for Newquay got on with lots of fake tan and not much else!  It was chaos upstairs, so glad I sat on the lower level with the old buggers.  A bloke who thought he was a Cornish Bob Dylan got on with his guitar and chatted to me about amplified bus noises which was 'fun', til we finally came into Quintrell Downs, just behind time approx 23:20.