Crunch time in the BRAPA Derbyshire quest, with only EIGHT GBG pubs to go at the start of play, five on my radar for today.

All were in difficult(ish) locations, nearly all had 'creative' opening times which didn't match the paper edition of the GBG, so thank the lord I checked WhatPub because I usually forget.

Lullington was the toughest place to get to.  A 1.7 mile walk with no pavement from a very irregular bus service, and this one opened 5pm.  As a result, I decided to stay the night in Burton Upon Trent as I feared a late finish.  And as a consequence of staying in Burton, I wanted to do EXTRA pubs, which meant drunker BRAPA than usual.  And even then, the Burtophiles still felt I could and should've done more!  Never satisfied.  So yes, in short, blame Lullington for everything. 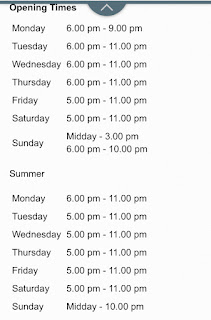 So yes, it is saying something when the MICRO PUB is the one with the most sensible opening hours, as this isn't a feature you'd associate with the brand.

Bright sunshine one minute, pouring with rain the next, the weather seemed symbolic of this craziest day of Derbyshire 'ticking' yet, and the bus ride from Derby to Melbourne was a strange affair.....

It felt like the bus ride from Peterborough to Ramsey, and I wouldn't wish that one on anybody.  Bumpy , flat, remote, swathes of water surrounding, it was 'hold onto your hat missus' stuff.  But Melbourne seemed a pretty little town and at 12:03pm, was relieved to see the pub open ...... 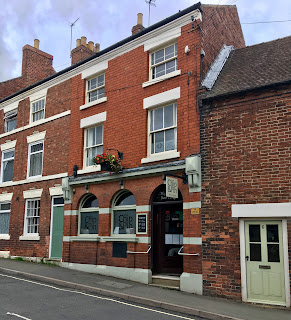 Buoyed by the fact that Chip & Pin, Melbourne (pub visit 1690 / 2663 gross) seemed to be situated in a normal old building, I pushed the door, 12:03 remember, and was surprised to see my progress immediately hampered by two greyhounds, attached to a man of similar build, which also reminded me I had a pack of Cheesestrings in my bag.  I like greyhounds, they are docile, intelligent, quite clean, I could never describe one as a 'twog'.  Not as good as a cat, but you can't have it all.  I teetered around the edge, finally located the 'wall of beers' and I confused the kindly owner cos I ordered a very nice 'Two Four' (which was Beer Three on the wall!)  They'd just run out of the Black Country Plum Porter that everyone wanted (not Titanic, but just as good according to West Brom EL who of course is in no way biased).  Yes, Mr Greyhound had got in early for the dregs.  #PubMan, and we had a nice chat about Plum Porter price discrepancies in the local area.  The owner noted my GBG on the table, asked if I was a CAMRA, I reluctantly admitted it, and he brought me 10p change for the discount.  A small but quality detail as to why I favoured this place over many other micropubs I've visited this year. After Mr G and Owner had some serious ale chat, Mr G left with his hounds to be replaced by an indecisive couple, she also wanted the Plum Porter and ended up with one of those wooden 'taster' trays with three thirds.  Editorial note - I think anyone who orders these taster trays should be taken outside, shot, brought back in, made to rate all the beers on the NBSS, and then taken outside and shot again, just to make sure.  Joking of course, this couple were smiley and pleasant.  I just don't think it is in the 'pubby' spirit to hedge your bets like you are encouraged to do in more modern outlets in 2019.   I think you go into a pub, take a chance on an ale, there's that sense of peril, sometimes you'll love it, sometimes you won't, but you are stuck with it, a whole sodding miserable or glorious pint of it, and you live and learn for next time.  And a bit like visiting a pub for just 10 mins as opposed to 25-30, how can you form a lasting impression from such a small measure?  I drink thirds at festivals.  I never remember any of them! (though there could be other reasons for that too....)   Anyway, it was also quite fun watching the owner through the little window using this old fashioned pulley system to bring his barrels up from the basement, trust me, it'd be beer porn for some.  Also, he really got into the BRAPA concept - a real natural - he says "you are so close to the Leics / Warwicks borders, have you considered places like Elford and Polesworth?"  I hadn't.  In fact, I thought Elford & Polesworth were a pair of rude animated cats on a late night HBO show voiced by various people called Seth.
What am I on about?  I've only had one pint at this stage ....... 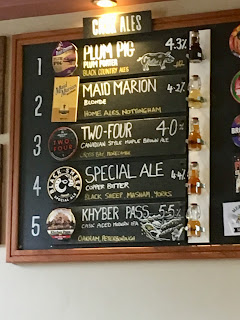 Waiting in the pretty market square for a bus with a few sleepy looking locals, I noticed a shop called Birds Confectioners.  And if you've never had a deep fried Cirl Bunting dipped in Green & Blacks, then you've not lived.

My next pub, on the same bus route, was just about 10-15 minutes further south.  Arriving at 13:25, I thought I might have to loiter for five minutes as Whatpub listed the opening hours as 13:30, but a sign on the door said "go round the back, we're open...."  Bonus! 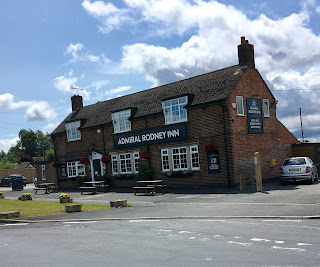 And what I wasn't expecting to see was a cricket pitch, and a game in full 'swing' quite literally, as the visitors were pulverising the poor Hartshorne seamers with 4's and 6's galore, some of the cars parked by the pub were in a very perilous position indeed! 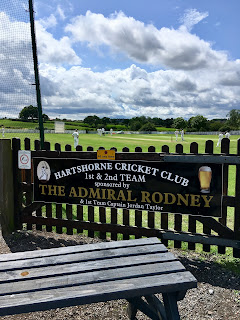 I walked through the gate, nodded to a man who looked like Derbyshire's answer to Nelson Mandela, and walked into the sweeping but quite homely Admiral Rodney Inn (1691 / 2664), where I was delighted to see Bass on as a guest so I kept my Derbys theme of "if I see it on, I'll get it" and a kind bald bloke served me.  A quick pub exploration showed the cricket lunches were laid out nicely, and by gum those sausage rolls looked enticing.  Took some will power to remind myself I had a full rucksack of snacks and didn't need to pinch one.  Anyway, I retired to the outside area surrounded by blinking coffee drinking geriatrics who didn't seem to know what day it was, smiled sweetly and supped my Bass in the blustery wind as the visitors continued to pile on the runs. It was early days and they did get a speculative lbw decision (a mere hopeful strangulated cry from the bowler), which seemed to be given more as a sympathy vote than anything else.  Maybe the umpire was worried he'd be frozen out of the lunchtime sausage rolls?  All the home team captain could say was "come on boys, keep working" AFTER EVERY SINGLE BALL.  It was pretty uninspiring captaincy.  Mike Brearley would be turning in his grave if he were dead.  Which he probably will be now I've written this.  An old bloke lamented he'd be umpiring today, but for a recent bout of pneumonia.  From where I was standing, he was doing well just to be alive!  I knew I'd need a taxi if I was to get to my next pub, and when the company I phoned couldn't assist, the kind landlord was at my shoulder to give me a better number, then he had a cheeky peak at my GBG, the taxi co. said '25 mins' so I settled down to sup my Bass slowly, but after 10 mins, they arrived, and I had to neck it, much to the amusement of the old boys, who suddenly had a glint in their eyes I'd not noted previously.

The taxi driver didn't speak a great deal of English and I must admit I was worried we seemed to be headed straight for the centre of Burton at one stage, but he assured me all was well and after what seemed like an age (though he only charged me a tenner) we arrived at pub three.  As I sized up the outdoor pic, the heavens opened - hard to think just twenty minutes ago, I was watching cricket in the sun!


In terms of pub aesthetics, the Brickmakers Arms, Newton Solney (1692 / 2665) was a contender of pub of the day with a gorgeous old multi-roomed interior, dark, homely, presided over by a lovely couple.  Exactly the sort of country pub I'd imagine there being loads of 'back in the day' long before I was spawned to become the UK's most evil pub ticker.  'Twas all Burton Bridge beers, so I opted for the bitter which seemed the most Bass-like as I knew I'd get more red triangled goodness in the pubs to come and thought I'd be kind to my palette (listen to me eh, Si Sommelier!)  Obviously, the conversation with Mrs Brickmaker was weather based, but I thought I did a good job of making it entertaining!  Anyway, rare for BRAPA, I plonked myself at the bar expecting to be the only customer during this half hour or so, so was surprised when a giggling group of idiots (in two separate factions to add to my misery) arrived and I was almost like "oi, get outta my gaff!" despite having only been here ten minutes.  They were on a crawl where they took it in turns to choose an ale, and they all had to have a pint of it.  I approved of this aspect at least!  One bloke wanted to talk weather with Mrs Brickie, and guess what, SHE started repeating all my best lines verbatim.  Can I sue?  Fuming.  His main contribution was living next to a farmers field, and when the crow scarer goes off in the morning, he shits himself.  Regularly, and literally I assume.    With Mrs B now going the full Sharon Stone Basic Instinct (crushing ice furiously with an ice pick I mean, don't worry), it was obvious our convo was at an end but luckily Mr Brickie appeared, spied my GBG, and we chatted Derbys pubs, me missing a bus and the type of customers they get.  Lovely pub this, a MUST visit. 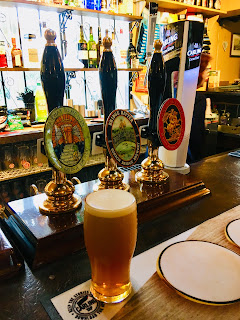 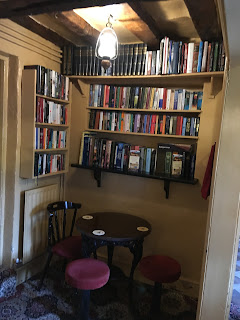 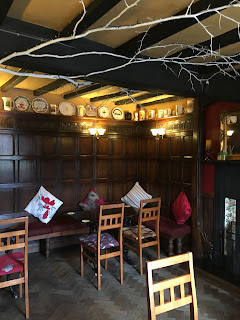 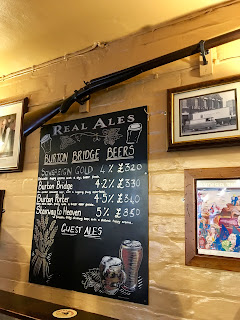 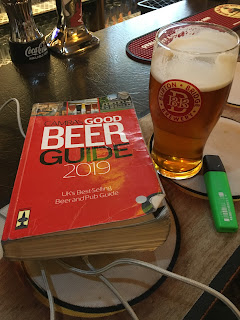 I was a bit blasé about the walk from Newton Solney to Burton, expecting it to be a mile or two max, so was a bit surprised when Mr & Mrs Brickie had raised a skeptical eyebrow or three, but they were right, it was just over three hours!  Still, at least it was dry again and I had to get a rare 22 bus to Coton-in-the-Elms, so all I could do was crack on.

And I'll tell you about pubs 4-6 in my next blog, it was about to start getting messy!