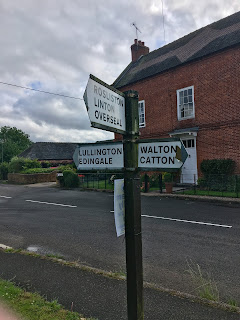 So here I was, BRAPfinger, the pub ticker with the Midas touch, striding out on the afternoon of Saturday 20th July, from the excellent Brickmakers in Newton Solney to a bus stop in Burton Upon Trent, where I needed to catch a rare 22 bus to a village called Coton-in-the-Elms for some tricky early evening ticks.

The highlight of the walk was coming into Burton over a bridge, and climbing down into this overgrown grassy area to have a wee, only to see a heron staring judgily at me!  Oh well, better than a guy who looks like Jesus with olives & Spanish ladies, as once happened in Paddington.

Just to confuse everyone, the 22 bus turned up at EXACTLY the same time as the 21, both bound for Swadlincote.  All the 22ers looked at me with a note of respect, this was the more discerning of the two routes obviously.  It was only about £2.20 for a single. Amazing.  Big spender eh?

BRAPA fact - if you ever talk to a bloke from Derbyshire, they are guaranteed to mention 'Swadlincote' in the first ten minutes.  I don't know why they are all so obsessed with it, but they are.  It doesn't even have a GBG pub!  I think they might just like to wrap their lips around the word.  And they give it cute nicknames.  "Swaddie"  "Swadders", just plain old "Swad" are some of the variations I've heard whilst pub ticking Derbyshire.

The bus unceremoniously dumped me in Coton, but instead of tackle this pub first, I decided to walk the 1.7 miles to the trickier Lullington, remember a 5pm opener hence why today got so 'epic' so quickly.  It was about 5:10pm when the pub came into view, and I immediately thought "uh oh .... beer festival!" when I saw a giant marquee in the garden.  Time to investigate ...... 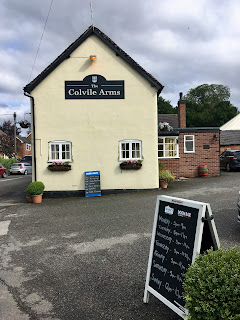 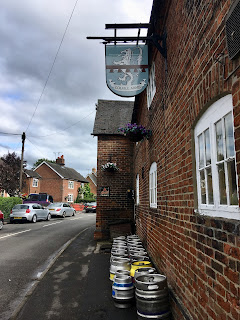 So I tentatively entered the Colvile Arms, Lullington (1693 / 2666) with a real sense of trepidation.  All quiet.  Of course, they were all outside.  Were they going to shoehorn me this way?  How could I explain I merely wanted a pint of Bass in a real glass, I wanted to pay by cash, no I didn't want a glass or programme or vouchers.  But then, a sweaty man pushed his head through a small hatch like a friendly foetus, and exclaims "HIYA!  YOU HERE FOR THE WEDDING?"  Ahhhh, Wedding, NOT beer festival.  Better or worse?  For better or worse, haha.  Sorry.  "Noooo, just for a pint!" I replied, asking what was on (I'd obviously not come in the main way) and soon I was given the Bass I'd been expecting!  I noticed through the hatch a larger, welcoming room, so spent the next five minutes going outside and back in, down corridors to toilets, smiling at bridesmaids, holding doors for flustered father-in-laws in ill-fitting suits, giving the odd page boy a kick in the head, and finally, I was sat alone in the corner.  Quite an interesting pub, it seemed to be 'upholstered' in a modern, yet wholly traditional pub room style with bench seating and the works, a cracking place to have a pint.  It was far from perfect though, far too stuffy (had Dad been here, he'd have had to go outside!) and a weird slightly sulphurous smell dominated the air which my brain tried to tell me was the Bass, but definitely wasn't!  Yet it lingered.  What made this pub most great and will most stick in my mind were the staff.  The sweaty guy who seemed in charge, and the more hipster young one.  They were so busy, kept having little pep-talks between them like "right, we've got through the first hour, look out for when the speeches end, as they might all come down here!"  And later on, "don't let them use the toilets in the pub , they'll only block them up!" which made me wonder just what they feed these wedding parties.  And sure enough, a loo visit had me colliding with another shambolic father-in-law with a sheepish look on his face, he'd snuck in and somehow blocked the urinals!  One man did finally arrive at the bar and whispered, highly confidentially, that he wanted a can of coke and a coffee, as though he didn't want it known he was struggling with the booze.  I drank quite quickly, for I was now paranoid re 'the end of the speeches'.  "Sorry your visit was in such strange circumstances" said our friendly staff (isn't it always?) and whilst they were right I'd probably not seen things at peak-Colvile, the fact they took the time to chat and make me feel welcome when they were so stressed out was the true mark of the quality of the place. 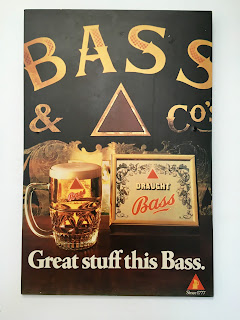 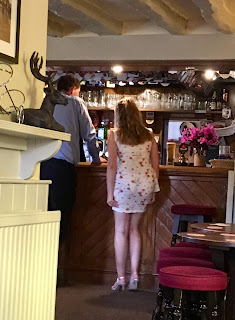 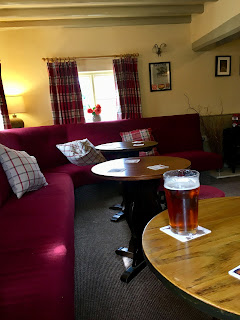 I walked back to Coton-in-the-Elms with a smile on my face after all that, but it must be said I was sick of walking by now!  Still, only one Derbyshire pub to be done today and then I could start to relax so this was the last push in many ways ......

But I couldn't quite relax yet, as the local weirdo 'pounced' on me from the second I got into the lovely Black Horse, Coton-in-the-Elms (1694 / 2667), the standard of pubs really was so high today, though I couldn't really appreciate this one until I thought about it retrospectively.  "YOU'VE DONE THAT IN THE WRONG ORDER LAD!" barked the weirdo next to me, referring to the fact I'd ordered my pint of Bass and THEN removed my rucksack.  Picky or what?  The other locals edged away, pleased to see this poor unsuspecting visitor in the clutches of this 'character' rather than any of them (a fact they later admitted to me when he went out to smoke!)  He criticised pretty much every aspect of my day, slagged of Lullington and said I was 'soft' for getting a taxi back to Burton rather than walking 7 miles (though he'd never consider walking himself, obviously!)  But on the plus side, he gave me a taxi number which proved good, they answered immediately and told me they'd be here in 25 mins.  Just right.  And they meant it this time, unlike at Hartshorne earlier!  The Bass here I thought was the best one so far today.  So, our new mate goes outside and the locals immediately apologise for 'throwing me to the wolves', slag him off, and tell me he is called Junkie Brian.  "Do you know why he's called Junkie Brian?" asks a lady.  "Errrm, is it because he is called Brian and he's a junkie?" I hazard.  "Wowww, you are GOOD!" she replies.  Randomly, there's loads of cakes on a table in the side room and I'm offered to take "as many as I want", proper village local this.  One more point of order though for me to attend to.  That nice bloke on Twitter called The Wicking Man (a bit like the Wickerman but made of Bass instead of demonic straw)  told me his old school chum was the landlord, so I should try and say hi to Ade.  I ask the pub where he is.  Upstairs resting, like all good Derbys landlords.  He finally appears, so I'm introduced, and though he doesn't know who Wicking Man might be (I don't know his real name), he appreciates the sentiment, so I get him to do the honours with the highlighter pen just as Junkie Brian walks back in.  And right on cue, the taxi pulls up.  Great stuff.

Local knowledge from the Coton massive led me to ask the taxi driver to actually drop me off at this pub called the Elms Inn (which no one seemed to have heard of, or so I thought!) which was actually on the route back in to Burton anyway.

Well, it certainly looked impressive from the outside .... seemed I'd be able to get a Bass here too. 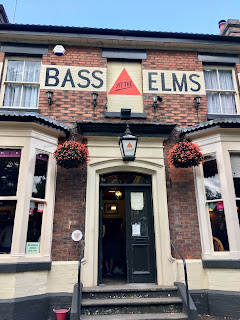 If the Black Horse at Coton-in-the-Elms is perhaps the most memorable "5th pub of the day" this year, the Elms Inn (1695 / 2668) was perhaps the first where the odd memory blank started to come into play, though I'd done well.  As I clambered up the steps and into the pub, I was totally blown away by the brilliance of it.  On a day of great pubs, this was the greatest.  It had a near magical atmosphere, was quite old and grand, and the two barmaids who greeted me and served me as a duo were so welcoming too.  I think they were surprised, despite now being 40, nearly everyone in here was a proper old codger.  The Bass quality, if possible, was even better than that in Coton, unless it was just the power of positive thinking.  My 4th Bass in 6 pubs, and third consecutively #BassStats
I sat in a room to the front right (I think it had a few) and just basked in the simplistic perfection of it all, the beer kicking in by now.  So funny, I'd told so many people on my travels today what my pub agenda was and the Elms got the most minimal reaction, yet Twitter reacted very positively to my visit but when that lovely young bloke called Quosh said he'd never heard of it, I believed him cos neither had I!  I have now.  Wow.  I think I got talking to a couple eventually, but really not sure!  Time to get checked into my Travelodge and drink a bottle of water I think. 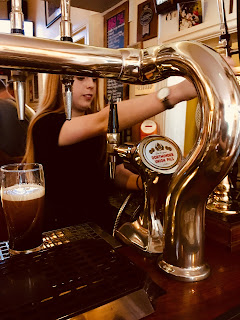 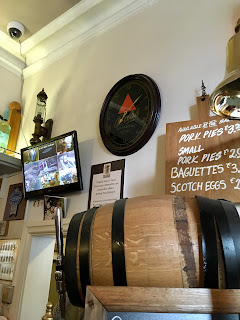 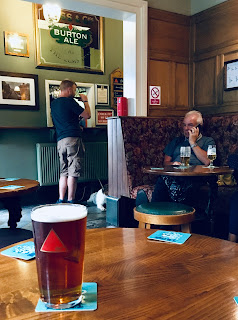 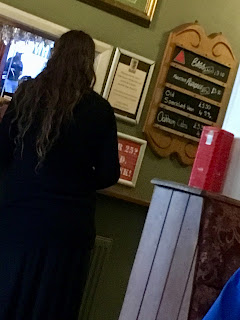 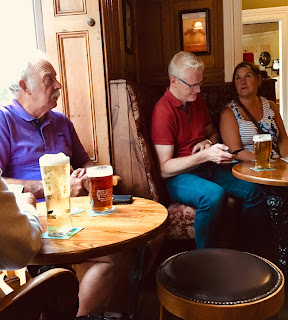 Join me for part 3 tomorrow, #BRAPAAFTERHOURS was almost upon us, and it was about to get very messy!