BRAPA in ..... Crayke or Fortune? Return to North Yorkshire

When I officially 'completed' the Good Beer Guide Ticking of North Yorkshire for the first time in Melsonby on 2nd April 2017, I made a solemn vow to strategy enforcer Mummy BRAPA Everitt that I would put my home county behind me, and focus on new ventures.

Sadly, living in York and seeing new 'gaps' appear in more recent GBG's has proved too much to resist, and with Father BRAPA willing to chauffeur me around some of these pubs, the vow was broken.  Would Mother BRAP disown me?

And in truth, after the crazy exertions of the previous night in Derbyshire, the easier day for me the better.   My legs were stiff as John McCririck, and the odds on this BRAPA horse galloping down the home straight by Saturday evening were rather bleak.

So, here we were, 10:55am, Saturday 13th July, in the car facing our first pub praying for an 11am opener as promised by the good book, the sky grey, the pub looking pleasingly stolid and stoic, which we hadn't necessarily expected ....... 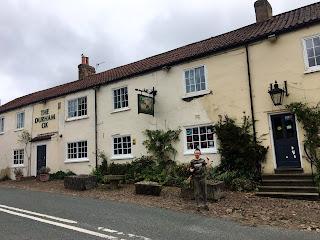 Yes, the Durham Ox, Crayke (1684 / 2657) has a local reputation (amongst Dad at least) as a pub that specialises in high quality food at high prices for gullible tourists and the Queen Ethelburga's crew, that poshest of boarding schools.  And true, you could tell you weren't in Rochdale, but it was at least 'pubbier' than expected, the red walls offering a bit of warmth and colour even if the so-called 'main bar' where we sat still gave the impression that if we were still here between 12 noon-1pm, it could be as Twining (not the tea) as the other rooms.  We'd actually sat in the car til 11:05am wondering why that door wasn't open, and it wasn't until we got out to take the above photo and "put a bit of pressure on" that we realised it had been open all along.  I've done that far many times than I  should've done over the past 5 years!  An old couple were walking around looking very miserable, as though they didn't understand the concept of a pub and seemed to be treating it like a museum or art gallery.  Dad sensibly ordered a tiny coffee with a tiny bit of 'tiffin' and the bloke said "two coffees?" and I was like "nooooo, piiiint!" but it wasn't that dramatic or slow motion in reality.  £6.80 the round cost me, which seemed a bit steep.  Dad recognised the gaffer, not to talk to, but he used to work with the bloke's wife, so pointed him out.  At one point in perhaps a strange attempt at self promotion, the bloke actually shouted his own surname.  For no reason.  Interesting tactic.  Decent pub, but glad we were here before noon!


Our (Dad's) toughest drive was next, as we headed up towards our furthest point at Thornton-le-Dale, going out towards Scarborough, quite east of here.  But being a sunny summery Saturday and heading straight through the centre of Pickering, a 'popular market town', we thought it wise to get this done first before we reached 'peak' afternoon.

And it was a good call.  We ended up much more central than expected, and Dad had to use his trusty parallel parking skills to squeeze into a tiny space in a car park by the river, proving once again why he is the 1988/89 football season parking equivalent of Kevin Sheedy (I'd be Paul Merson).  The boy done good.

And soon, after a slight wrong turn (my fault), we were on a main shopping street facing our next pub ......

Martin Taylor recently raved about this pub and he wasn't wrong, the Bay Horse, Pickering (1685 / 2658) was a haven of tranquillity considering the central location, historic and traditional to a tee, full of gnarly old blokes enjoy some trad bitters and a chat.  It had a few other rooms, and whilst Dad got the round in, I had a pee and found this calming back room, though the seat heights and shapes were far from normal, the only off-putting aspect!  So I was glad to return to the main bar and see that a perfect window seat had just become available and Dad was plonked in it, happy as a sand boy, and what's more, he was still on the soft drinks with his classic 'Orange J20 topped up with lemonade' which he always orders in an urgent voice which sounds like he's on the stage in Stratford.   The barman reminded me of a cute Igor, I'm sure he has a dracula in a crypt somewhere below to the pub which he feeds with pints of Tetley's on a daily basis.

Back to the car and fight our way out of Pickering then, and a poor young lad on a bike was stopped dead in his tracks by a posh lady bike enthusiast who quizzed him .... "Is that a 6 6 chopper?"  The poor lad admitted he didn't know, 'no need to be personal', I thought.

We continued east to Thornton-le-Dale, one of three North Yorkshire GBG locations beginning 'Thornton' I need to do, though I haven't got much appetite to get to the other two any time soon.  Even though the close-by former GBG entry Buck Inn was prominent, it took us a while to find this one the other corner.

The sign, well the way the "N" and the "I" swished around, the 'red flags' (as us woke kids say) were flashing in my mind before we even got inside.  What would our good mate and font expert Lawro think to such lettering?  That was my first thought.  Well I can tell you.  "Script fonts have their place, but it's not on pub signage". 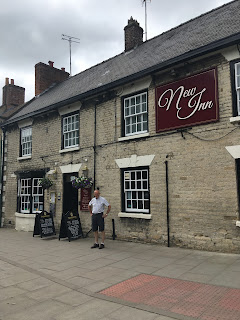 And it did the pub no favours (the swishing N and I continued to swish on the inside walls, like a Basil Brush's camper, bushier tailed brother, if that is possible) because once inside the New Inn, Thornton-le-Dale (1686 / 2659) I realised it was (just about) pub first and posh North Yorks nonsense second, just the way it should be.  A delicious pint of Hobson's Best could even have convinced me I was in the Anchor Anchor, Shropshire, though fewer cobwebs, obviously.  Ok, so the music was twee and a few people dined.  A man in a wheelchair dropped his knife and fork, and got a bit angry, blaming everyone but himself, which isn't the right attitude.  And best of all, a crazy old lady saw a couple minding their own business with a 'cute' dog, also minding it's own business, trying to sleep under a table.  "Awwww, she's gorgeous, what's she called?!" she shrieked.  "Poppy" they replied.  "Ohhhhh, Poppy!  I could steal that dog!" she shrieked, to which the owners looked concerned, the couple near us raised their eyebrows, and I said that if we hear of a dog-napping in Thornton any time soon, we'll know the culprit.  It was, in some respect, the perfect note to leave this pub on.


So there we go, end of part one.  We still had work to do as we started to head back in the direction of York.  I'll tell you about that in part two soon, and the latest from Derbyshire isn't far away.