Having had near on three days to recover from Cornwall with a cold compress to the head and cucumbers on the old eyes, the dominant BRAPA gene was stirring and wanted a day out.

It seemed an awful long time ago since Dad rang me whilst I was trying to rush my Ludgvan pub visit in what we know now in the trade as an 'Ilkeston Panic', but the trains were now booked and we were raring to go.  With less than 20 pubs left to do in Derbyshire and 4 of them here, it seemed the perfect place to go, and on a Friday daytime too, hopefully not too busy.

The sun was as strong as it ever had been in Cornwall, as we walked 20 minutes from the railway station to the centre of town, where three of the four pubs were situated.  BRAPEE No. 3 Tom Irvin may not have been with us in body, but it seemed he was sending out a message that his return to action was only two weeks away as we negotiated an underpass ......


Ilkeston market place must be the hugest market place ever, everything seem to lead off here so it was no surprise to find the 'Spoons slap bang in the middle .......


It looked like a 'Draft House' in Milton Keynes, perhaps the theory in the design that on a clear cloudless night, the vast windows allow you to look up and see all the stars in the Solar System?  After all, it was named after some local astronomer and called The Observatory (1664 / 2637).  Being my 1664th pub, I toyed with the idea of getting a pint of Kronenbourg for about 0.01 seconds, but realised you don't get 50p off on that stuff.  I nearly went for an Oakham Citra to recreate my Bodmin 'Spoons success, but Dad was eyeing up a Pheasantry as I notice he often does in 'Spoons (possible cos pheasants nibble his plants at home) and we took them to this upstairs area which even had an outdoor balcony, it was a bit like Layton Rakes in Blackpool with less errm 'passion'.  Nothing much happened, so at least we had chance to work out 'Milton Keynes' was an anagram of 'Milkestonney' or perhaps better still, Dad came up with 'Smokey Linnet', the ale we didn't get!  Beer quality was good, but this was very much 'the calm before the storm' pub-wise.

I think I was still in swash-buckling adventurous Cornwall mode because I told Dad I didn't need any electronic device nonsense to find out next pub.  How wrong I was!  About 4 wrong turns later, I gave up and realised it was quite hidden round the corner of a side street. 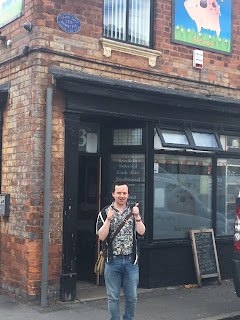 No time to check my groins and lymph nodes for buboes, or even the floor for scuttling black rats, as here at pub 1665 / 2638, Burnt Pig, our day really came to life with a bang.  Dad probably has even littler faith in micropubs than me, but I've said it time and time again, there are plenty that buck the trend and rise above mediocrity.  This'd be a good pub against any opposition.  The landlord was 'on us' straight away, talking us out of ordering  a Titanic something cos the Hawkshead Bitter was better (OR he just wanted to shift it!)  I slag off micros for being closed so many weekdays, but he told us he uses this time to visit breweries and bring back their ale for his pub, which I found commendable.  It was a delicious drop, though I've rarely had a bad Hawkshead.  We got some proper pork scratchings too cos you can't go in a pub called burnt pig and not, can you?  Vegan or not.  He was interested in us too, so we explained we were visiting from York, at which the whole pubs ears (pig's ear?) pricked up like Anthony-Worral Thompson on a pack of sausages,  and a chatty bloke with less chatty wife (basically his 'taxi' driver, imagine ;)) says he'd been on a York crawl recently, before reeling off a list of some of the most dreadful dining pubs in the city like Judges Lodging and Whippet Inn, plus Lendal Cellars.  He could've done better to be honest!  Soon, all corners of the pub were overwhelming us by firing the names of about 15 pre-emptive micropubs at us.  It was like reading RuRAD on acid.  One kept being repeated, Marlpool Ale House, so we said we'd make the effort later on!  Along with the friendliness though, this was a micro of some depth (3 rooms!) and genuine warmth, and I would recommend greatly even if you are quite close-minded against the things.

Had all been slightly too intense for us, so after a few welcome gulps of fresh air and food, Dad and I headed back around the corner to my third GBG pub which no one in the Burnt Pig had any enthusiasm for us to visit, probably cos it isn't a micropub!


So it might have been in our subconscious after the intensity of the Burnt Pig that we entered through the empty smaller left hand side of the pub of the Prince of Wales (1666 / 2639) and yes, you guessed it, I was half expecting a 'Great Fire' to break out.  Actually, Burnt Pig?  Great Fire?  1666?  We'd done these pubs in the wrong order hadn't we?  D'oh!  It took us a while to get served as all the staff were tending to the locals in the other bar, Dad finally in the hot seat as a black rat with a cockney accent scuttled across the carpet.  So yeah, whilst it was obvious all the action was in the other side and we'd have been engaged by some friendly folk had we gone the other way, I still had a Brian Clough picture smiling at me from the bar.  It smelled so strongly of smoke, Dad suspected the ban wasn't being observed in this pub, though some folk (it rhymes with 'Cold Budgie') might suggest the smell evoked pub nostalgia of a bygone era (30th June 2007 to be precise) and it all added to a quintessential traditional East Midlands pub feel, and that ain't something to be snuffed at! 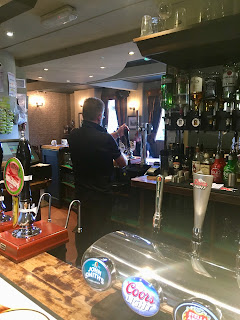 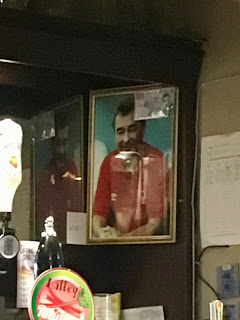 But what was this?  Just outside the pub, an old lady being helped out of a taxi.  Dad saw his chance and swooped in for the kill.  Onward to the next pub James!  Join me for more in part 2 tomorrow, the craziness was about to be ramped up to 11.