BRAPA and .... the Curious Incident Of The Bloke In The Gents (Gainsborough Pt 2/2)

Nearly halfway through my GBG debut in the Lincolnshire town of Gainsborough, and I didn't feel it was grabbing me, like say Cleethorpes had last summer, or Lincoln had on my first BRAPA trip in Jan '15.  But to be honest, I don't really feel Lincs has been a very rewarding county to date.  I guess I have to get out in the sticks more!

Luckily, our third pub of the day was to continue the upward trend we'd also seen in the Blues Club just across the way....... 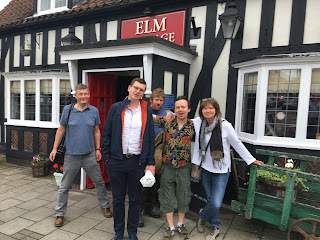 I liked Elm Cottage (1679 / 2652), it looked like a pub, it felt like a pub, it sold beers like you'd get in a pub, and it had an atmosphere like what you'd find in a pub.  Sounds an obvious formula, but amazing how many places, especially those in Gainsborough, fail to deliver on those fronts.  A rare dartboard with no doubles or trebles, my Proper Job was top quality, better than a lot you'd get in Cornwall, and the highlight (quite tragically) was eating my corned beef and 'green leaf' sandwich in home-baked bread by Mummy BRAPA, knowing no-one who worked here would mind.  The fact I remember zero details about the pub makes me wonder what the green leaf actually was. 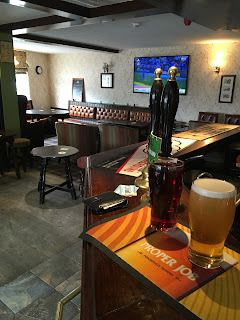 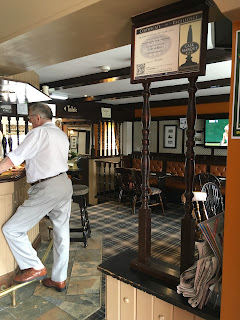 The 4th and final Gainsborough tick was the most highly anticipated, having received top reviews from those who'd been before ........ 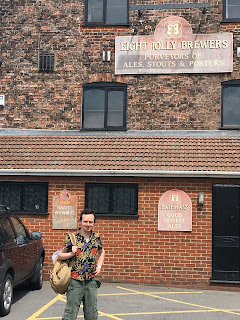 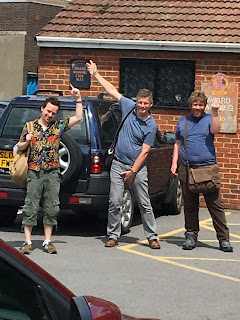 So it was probably written in the stars that now BRAPA was here for the 'official' Eight Jolly Brewers (1680 / 2653) tick that it was going to rubbish today!  The potential was there, grade II listed and 300 years old, it had a great interior, totally ruined by flies, you wouldn't see that many on a corpse.  So we sat outside in the grubby front 'courtyard' (car park?) where a group of Gainsborough residents were loud, perhaps a bit insane, and I commented to the others that if I was here doing a solo BRAPA, I'd be picking up some great conversation snippets!  (But would've been terrified too).  Christine used to teach at a college, and some of the students travelled from Gainsborough, and they could be easily be identified at a safe distance, due to similar 'personality quirks' as this bunch.  Still, it was obviously spreading as Paris Hilton and Love Island got mentions on our table, though Tom to his credit had never heard of any of them.  I went to the loo and an old man said 'nice shirt, I had one like that in the seventies' so I said thanks, explaining I was worried I'd dressed far too summery earlier but glad the sun was out now, and we washed our hands (not each others) and had a nice chat about the improving weather.  But then, at the hand dryer, I went to say bye and he growled "they're all fucking liars and jealous cunts" and I've still got no idea what made him turn like this.  And what was he talking about, hand dryers?  True, I prefer paper towels too if given the choice.  It summed up the clientele anyway  and the feeling this had been a real 'nearly pub'.


With someone saying "it is all bollocks and then you die"  (probably Tom or Dad, sounds like something they'd say), we left Gainsborough and I just hope I never have to go back.  I will.  But I thought it was a pretty crummy place.

We had one more tick to go at, in Retford.

It felt like a good stretch from the station, and as we approached, my initial thoughts were "Nooooo, they are closed!" ...... 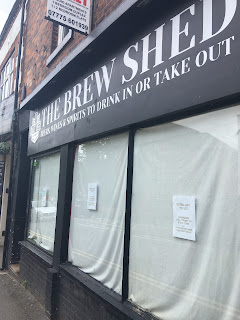 But the building next door, luckily, was a more open version of the same thing ....... 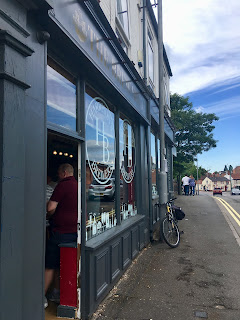 The Brew Shed, Retford (1681 / 2654) had spent the first half of the day winning the local CAMRA pub of the year award, which pretty much means it is better than Idle Valley Tap, yes it isn't a bar (excuse the pun) set particularly high in Nottinghamshire's most forgettable town.  In fact, Christine had noticed an interesting GBG quirk when it comes to Retford.  The paper based GBG lists BeerHeadz, Brew Shed and Idle Valley Tap as the three entries, yet the App edition of the Guide lists just two entries, and these are BeerHeadz and the White Lion!  Huh?  Sort it out CAMRA.  I explained I couldn't visit the White Lion without taking the green highlighter to my phone screen, and that'd be wrong surely.  Anyway, we suspected here in Brew Shed, they were still basking in the glory of their awards as Dad's round took an interminable length of time to arrive.  Even though a barrel needed changing, his feeling was it still shouldn't have been this difficult!  Felt a pretty average bigger micro to me, good pint of homebrew, man with broken arm,  standard. 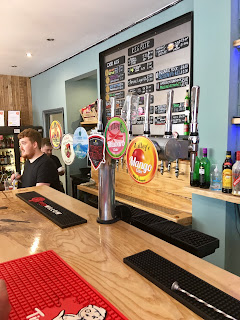 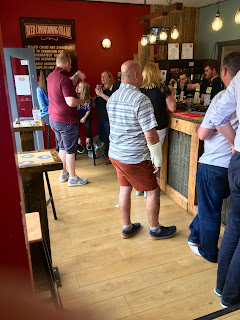 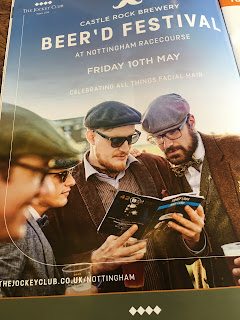 Back in York and after a nice sobering coffee, I took Dad for his Crescent Community Venue  debut, after Martin Taylor had seen it for the first time with me a couple of months before.  Dad commented that the day 'didn't really flow' and I knew exactly what he meant, the pubs and towns not really up to scratch for the most part despite the great company and catch up with our ole' Hull City mates.

Anyway, like a Cornish wife (see previous blogs), I beat Dad 2-0 at free pool, kids played on vintage video games, and I got on the craft cans, which was as good beer as I'd had all day, if I'm allowed to say that! 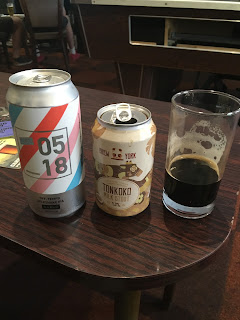 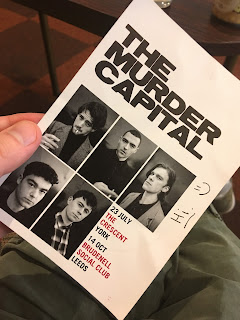 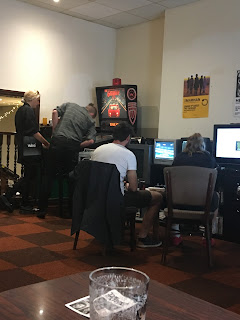 I am FINALLY catching up with these blogs.  I might be up to date by the end of July, now how amazing would that be?