Aren't buses strange down here in Surrey?   I don't think the drivers really understand how being a bus driver works.
On the way down from Guildford earlier, the driver had asked where I was going.  'Cranleigh' I said, brandishing my contactless card.  "Oh Cranleigh, beautiful place, enjoy!" he says.  When I ask about payment, he waves me away and goes off to smoke before departure.   Now, he can hardly walk down the bus like a train guard and 'grip' me later can he?
In Cranleigh, he apologises for missing the stop.  "Sorry mate, I DID hear you ring the bell, I just forgot to stop!" he laughs, and I escape.  He was a bus driver, right?
So when I ask for a single to Wonersh on the way back, different guy this time, he laughs.  "Wonersh?  What a great word to get your mouth around innit?" he says, like he's never heard of it before.  And we have to stand there practising saying Wonersh ("Woe-nersssshh, Wonnn-esh, Wawnish") for a couple of mins and giggling, before he decides he's probably now running behind time.
At least I paid this time and he stopped in the right place, just outside the pub ....... 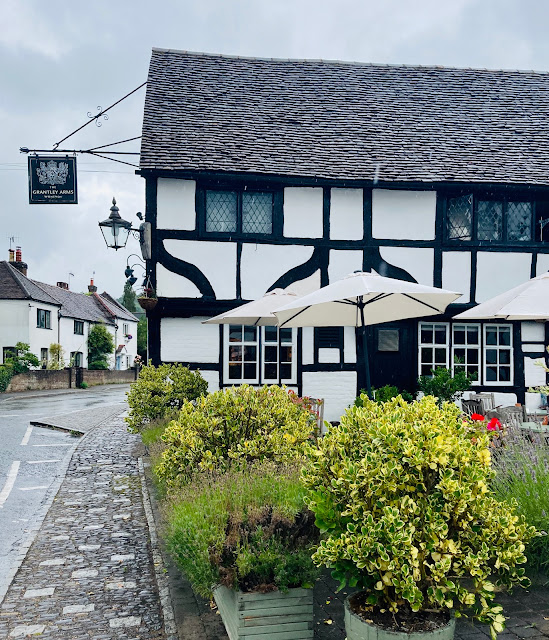 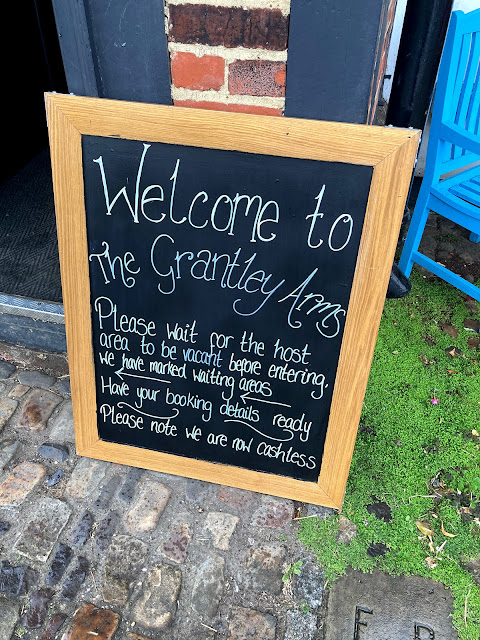 Grantley Arms, Wonersh (1762 / 2979) never came close to matching the bus excitement, but my anxiety was building again on arrival as this was one of the few pubs which gave the impression that pre-booking was mandatory, so I was nervous I could be turned away, pintless & publess!  The above blackboard seemed to back this up, but for the casual pub ticker on public transport, there is simply no way you can commit yourself to a specific time slot.  I decided I'd merely have to put on my most pathetic pleading expression, and say all that I am asking for is one pint and I'm not fussy about where I sit, you can even put me outside in the rain or in the bogs.  It was a tactic that would serve me pretty well over the week.  At the reception desk, a bloke says "ooh terrible!" when I admit to having not booked, but he was soon happily showing me through to an indoor table in quite a prominent position that would seat about six.  I was then handed over to a barmaid/waitress called Josie (sans Pussycats) for a fine pint of Young's Original at, what in the context of things, seemed a reasonable £4.15 (never thought I'd be saying that back in 1999!) and I was given a quick run through of the floor arrows & loo direction.  This was a gauntlet you had to run between reception desk and a kitchen where swing doors constantly revolved and pristine white shirted individuals brought out posh meals to well-fed middle aged and elderly locals.  It was uneventful otherwise, and perhaps as close to the stereotypical Surrey pub experience I'd been told to expect, but after Cranleigh, it was just nice to be indoors and dry!

The walk to Bramley didn't look far but the bus was timed perfectly for my departure, and it shot round the corner a minute early if anything, and there was no further bus amusement sadly.
As I crossed the road, the rain finally stopped and the sun was trying to break through the clouds again, a good omen perhaps just in time for one of the best pubs of the week ....... 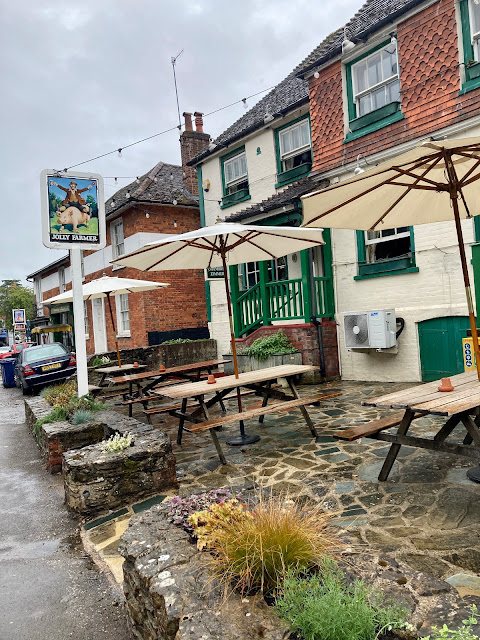 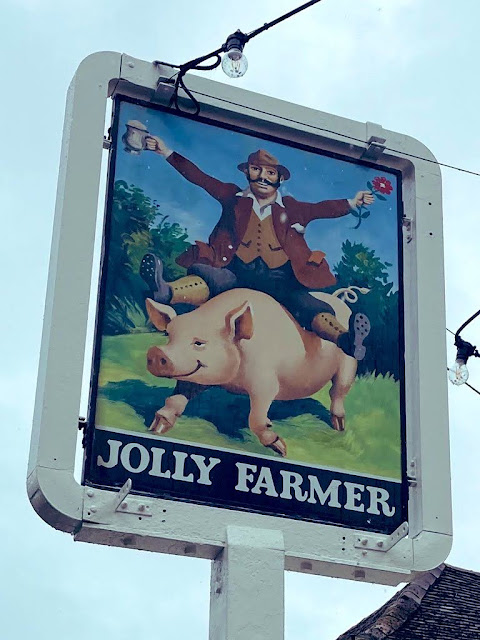 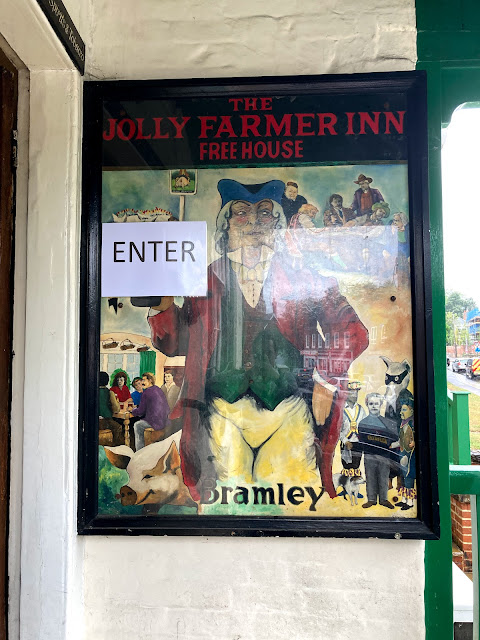 And aren't the best pubs those which are a total surprise?  This was certainly the case at Jolly Farmers, Bramley (1763 / 2980) which I'd never even heard of before, not like the overly-done fanfare before you visit a classic famous pub like the ones at Worth Matravers, Newton or Falmouth.  This was more joyful than all three, because at the end of the day, it was a living breathing pub, not a museum piece or preserved relic of yesteryear.  A trend between the best pubs and 'less strict' Covid rules was also prevalent as the week progressed, and after a quick hand sanitise, all that was required of me was to put my name and number into this dusty old book like the Dead Sea Scrolls, even the orange biro looked grade II listed!    It just smelt, tasted and had the atmosphere of a proper old pub.  In terms of the indoor pub photos I took, I didn't even have to try.  I simply pointed my phone in a few different directions and 'click, click, click', and looking back now they are some of the best pub photos I took all week!  Testament to the pub.  A jolly landlady (hopefully a farmer) serves me one of the ales which wasn't Greene King IPA.  Later I'm told the two main guys who run this place are proper miserable buggers.  Who knows if that was a joke or not, but I certainly hope they are!  This sprightly lady walks in for a pint, about the only customer, and I couldn't help but laugh as she recounts how she was jogging down the road and a bus totally splashed her, you should've seen her trousers, drenched somehow in every area but the crotch!  She saw me laughing and decided to join me.  Lovely lady, one part Tanya Arnold off Yorkshire BBC Sport and one part Tamsin Greig off comedy things.  Can't remember her name cos I deleted ALL my notes.  Colin got ignored (poor lad), but after plenty of BRAPA chat, she convinces me walking to Godalming is possible so off I set..... 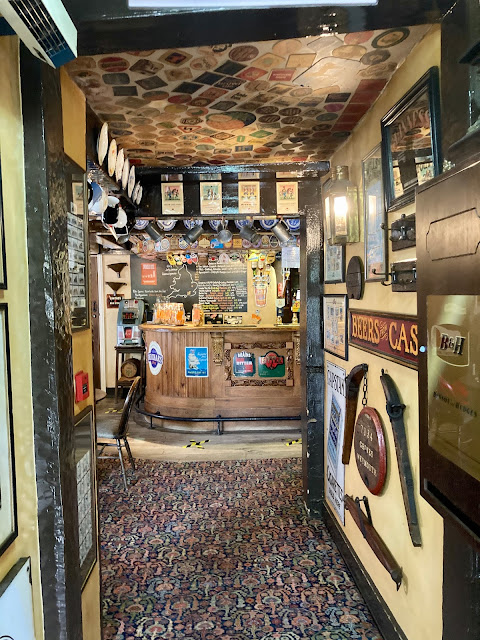 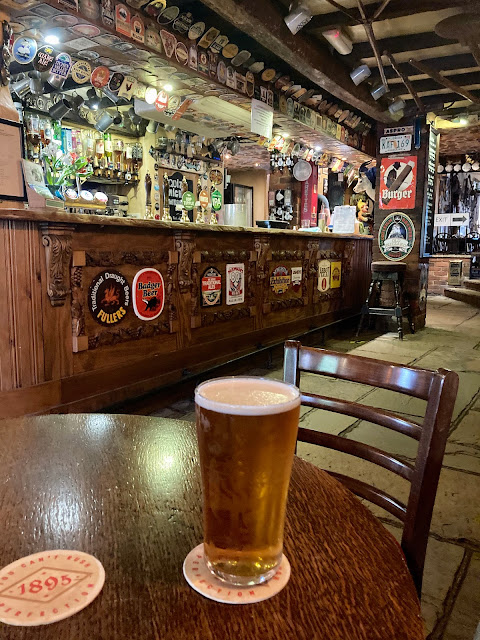 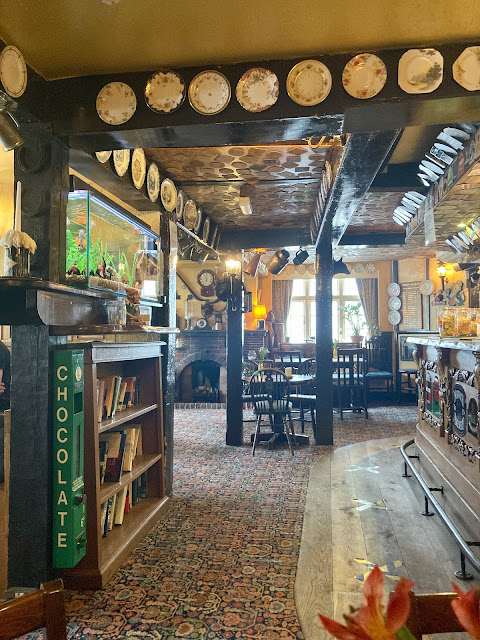 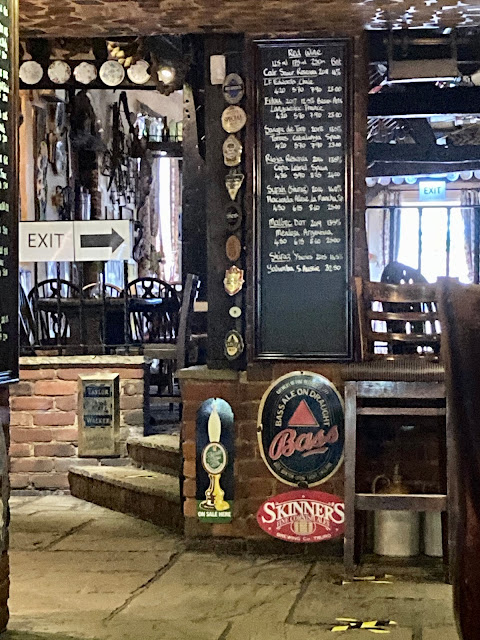 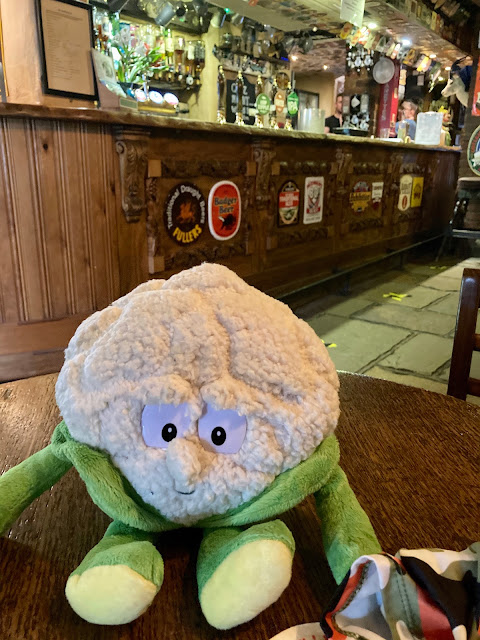 It was an ambitious attempt, this Godalming walk and she'd been laughing at me for not pronouncing it properly (it is GOD-all-ming, not God-ALM-ing, almost Gallming if you say it quick enough).  Anyway, I was making decent progress on this country lane cut through near the golf club, but disaster struck with a road closure!
Now had this been a week into the holiday and I'd been at my adventurous swashbuckling peak, I could've got through around Peasmarsh but I  lost a bit of confidence and just doubled round on myself back to Shalford where I managed to pick up a bus/train (can't remember which) to take me back to Guildford.  Godalming would have to wait for a later day, shame as I'd surely forget how to pronounce it again.
Instead, it was back to Guildford to complete my first day, and this was the pub closest to my Travelodge, just across from the cricket ground.
It looked modern as I joined a queue between two beardos who looked like they might enjoy their craft ale at a push ....... 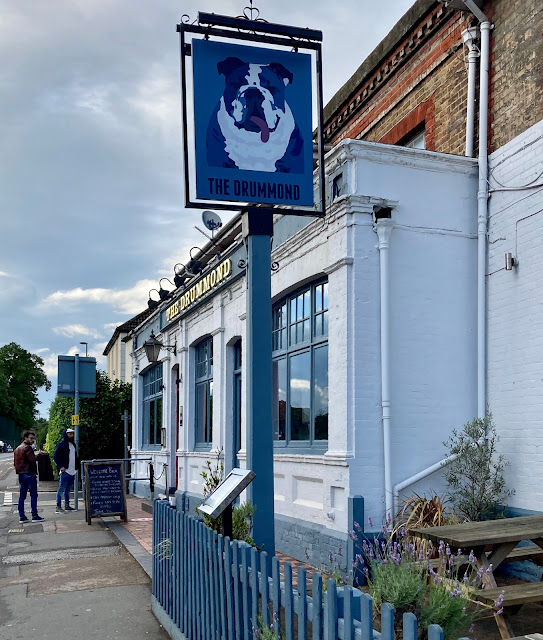 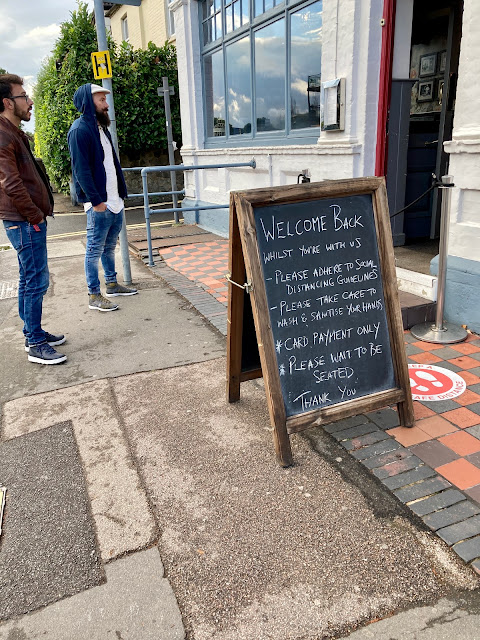 Being a modern style venue, we had a more modern style check in, scanning a Q code, belying me 41 years on this planet and getting down wit' kids.  Woop woop boogaloo. 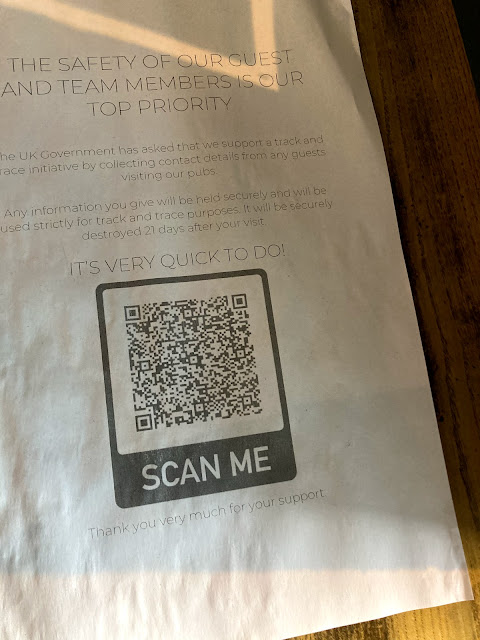 There was something irritatingly shabby chic about Drummond, Guildford (1764 / 2981), a bit like an Antic which hadn't quite got its shit together, but in its favour was some excellent music even if I was isolated on the left hand side of the pub, with most of the action to the right or outside in the smoking area.  My photography doesn't reflect it but it was quite lively in here as early 90's Madchester fused seamlessly with that similar 90's era when pop reggae kept getting in the charts with Bubblin' Hot, Shine by Aswad, Bitty McLean, and all that brilliance!  My pint of Tribute was orange and furry, much like most of the clientele's beards and hair.  Just as I was getting close to drinking up and still minding my own business, the BRAPA gods obviously decided to deliver me one last present for the evening, as this totally animated, loved up couple were seated directly in my eyeline in an awkward bench straddling pose, stayed for a very quick drink, did lots of European romantic gestures and pissed off.  You should've seen the speed at which their table was disinfected after they left!  Incredible effort from the staff.  So all in all, obviously a total come down after the Jolly Farmers in Bramley, but then, most pubs would be wouldn't they? 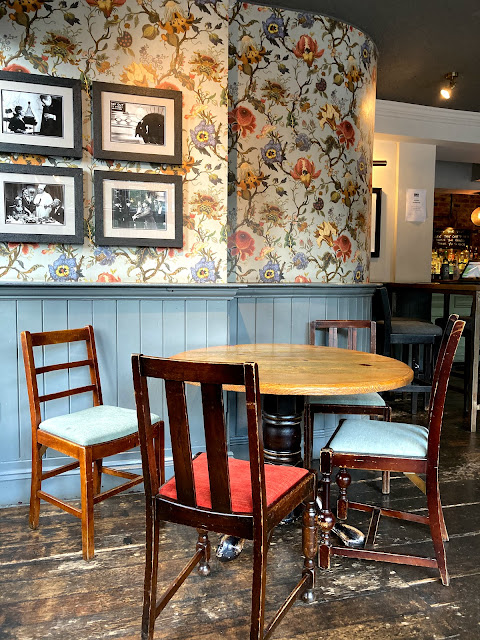 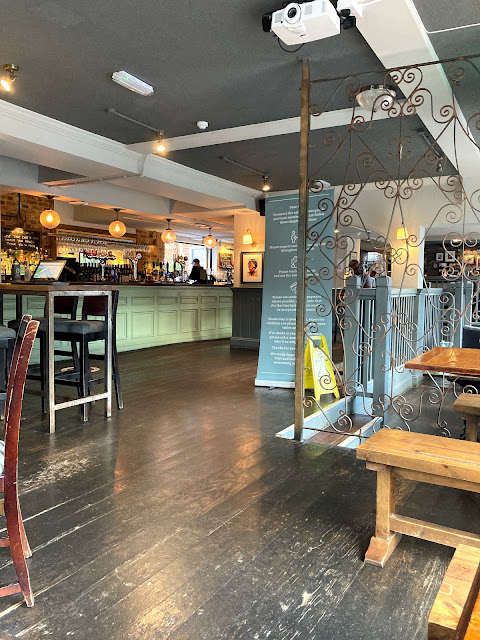 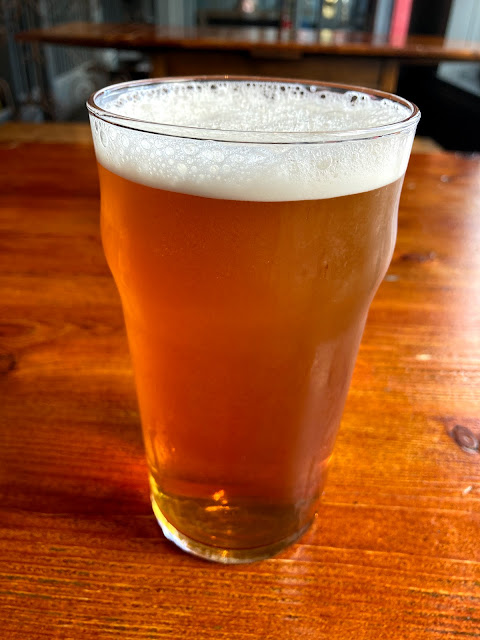 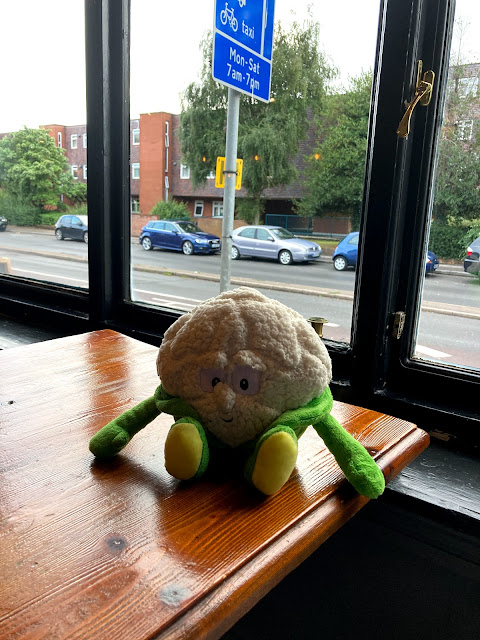 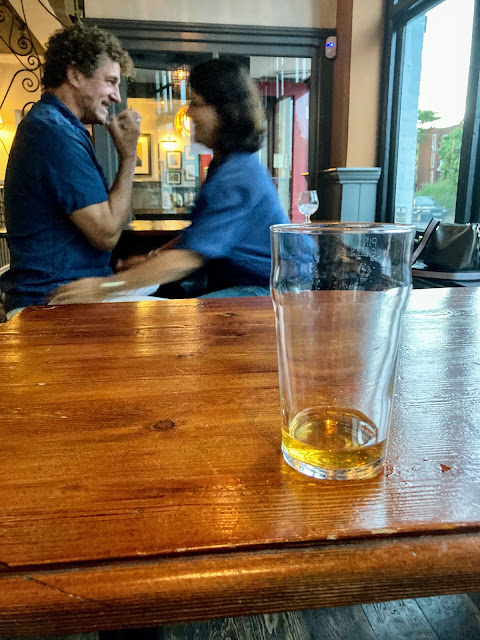 Day one complete, back to my Travelodge with a nice big bag of food from Tesco Express.
Rock n roll, bring on day two!  Which I'll tell you about in parts 3 and 4.  You don't have to read them all, I won't mind, just dip in and out occasionally.
Take care, Si
Posted by Si 'BRAPA' Everitt at 9:00 pm