I was all ready to declare myself well and truly beaten on a disappointing four pub effort, as I trudged uphill back towards Farnham station, late afternoon on Friday 31st July.

The extreme heat was still energy sapping, even as we approached evening time.  A bus farce at Churt had killed me early, and warm beer and not so warm people meant I felt totally beaten by the time Boundstone & Wrecclesham were over.

The lack of buses was boling my wee wee too.  This wasn't 'pretty green' Surrey (not Liam Gallagher's clothing chain), yet the public transport seemed pretty lacking.  The plan now was to just get a bus to somewhere near Tongham or Weybourne to salvage a fourth and final pub of the day.

However, as I passed a junction at Castle St, just past Boots and a solid looking pub not in the GBG called the Queen's Head, I had a bit of a word with myself re my tick at Upper Hale.  "Now or never Si" it said, quite sternly.  It was right, as this pub had limited 'evening only hours'.

I should've walked diagonally through the centre of the big green area where a headless horseman hangs out, but I stupidly went right around the castle up the Folly Hill.  Pure folly on my part (ha ha).  I felt almost sick by the time I finally reached Upper Hale, a ridiculous meandering collection of lanes, links and raised grassy knolls going absolutely nowhere in semi-suburban desolation. 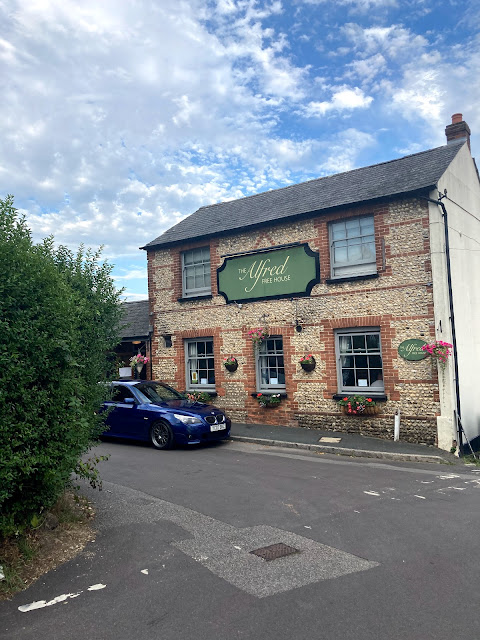 Due to the timings and beery focus, I was expecting something a lot more micropubby at the Alfred Free House, Upper Hale (1797 / 3014) but I guess they'd have renamed it 'Up Her Ale' or something more 2020 if that'd been the case.  I am still a bit cross with them that the pub sign was something blander than a picture of Alfred from Guess Who, a childhood hero of mine.  I was surprised what a vibrant clamour of tinny noise and chatter there was within, but the young lad who greeted me was absolutely spot on, so I told him I'd walked from Wrecclesham and just needed a pint, and was happy to be seated anywhere, so I probably shouldn't complain that I was led out into a tent and had to sit on a small plank of wood supported by two Sharp's barrels!  Good job I'm not a fat bastard or it'd never have supported me.  I got shown a blackboard with about 5 billion ales on, but the arrows showed me only 4 cask were on so that made choosing easier.  This was definitely a place for those excited by a beer range, only Surrey Oaks had come close this week.  Barely time to get my breath back, when I realised the tent was full of warm, funny, friendly characters.   They roared with laughter and disbelief when I explained my exertions to get here, and I unwittingly had the attention of the ten or so people who then started quizzing me on all things BRAPA - one bloke even took a sly photo.  The main guy Steve was lovely, all bravado but with a real kind heart you could tell straight away, he used to be a proper big city banker, putting my Yorkshire Bank stuff in the shade!  I was encouraged to take the piss out of a flamboyantly dressed Santa who looked the guy from Miracle on 34th Street, but I defended him on the grounds of the flamboyant contents of my own wardrobe.  The guy next to me had travelled back from some Manchester brewery trip - he doesn't want his first post lockdown haircut til December.  Such lovely people, why couldn't the SandRock have produced this?  Best of all perhaps, the revelation of how close I actually now was to Weybourne - something I hadn't considered, oh and after some debate about how quickly I could walk it, I was told I may as well then walk on to a Hants pub that was only 0.7 miles from there.  This pub was helping me to go from zero to hero, and I cannot thank the folk & staff enough for improving my mood by 100%.  As I said my goodbyes and walked off down the street, I could hear them saying nice things about me (til I got out of earshot anyway!) 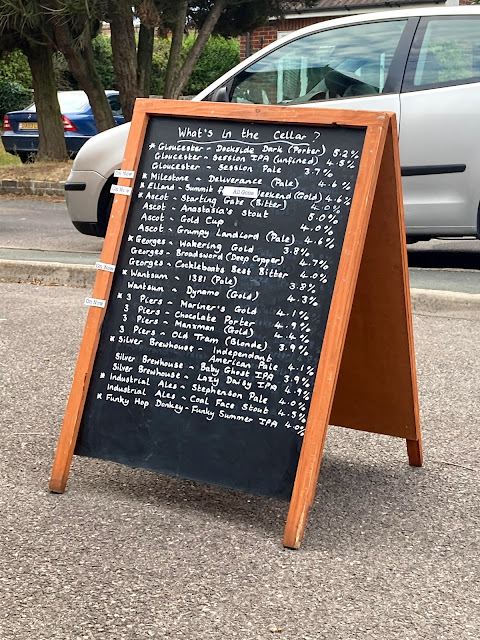 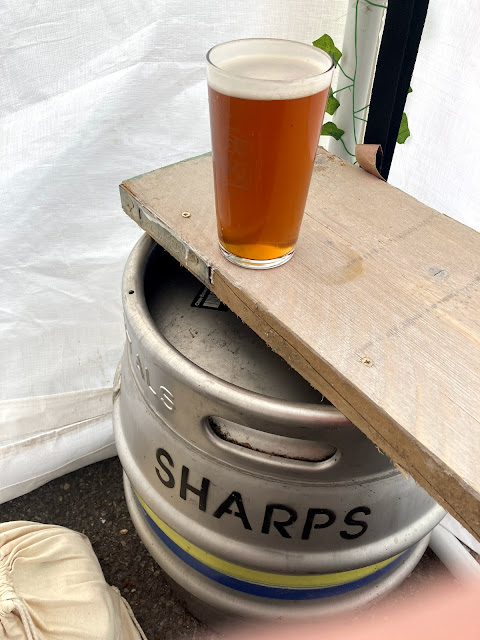 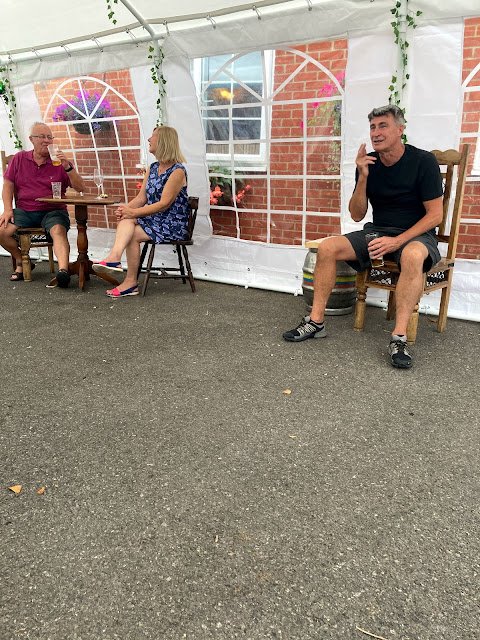 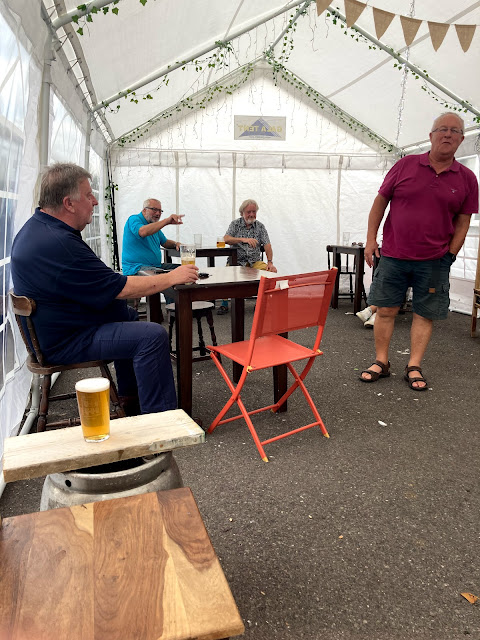 With a renewed spring in my step, I skipped onwards like a spring chicken towards Weybourne (the guys weren't wrong, did it in about 20-25 mins which was nothing compared to recent events) and one of the pubbiest Greene King pubs you will ever encounter  ....... 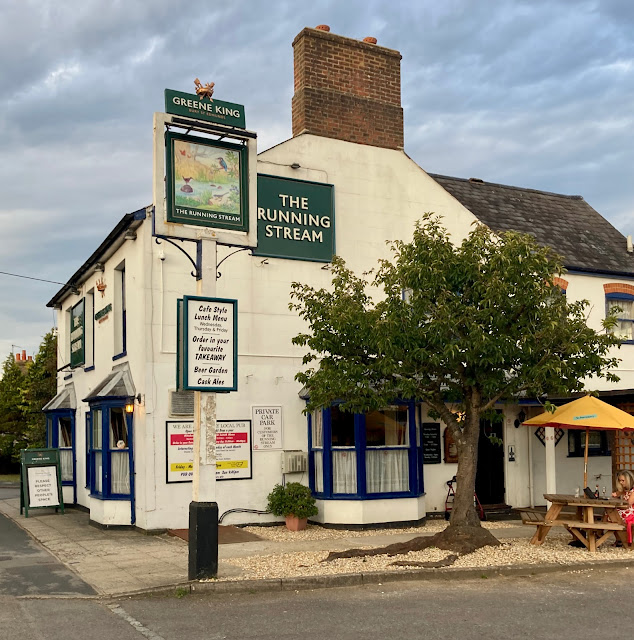 Yes, you could almost smell the Aldershot peril in the air as I walked into Running Stream, Weybourne (1798 / 3015).  So unaccustomed had I become in recent days to the gritty, rugged, indoor carpetted boozers, I had to reset mentally as the various blokes dotted around the room half smiled, half gurned.  Quite a different crowd from Upper Hale, majority here seemed to be here for the hubbub of a pub session first, beer second.  I had plenty of time to adjust myself to my surroundings as service was slow. Miscommunication perhaps, or maybe I wasn't seen to be standing 'directly behind the stool' as instructed, and the feisty landlady and timid minions just kept walking past me, some apologising for not being 'servers' (errrrm why are you stood behind the bar then?) or 'looking after the locals' first and foremost.  I noticed this too in Shepperton and have mixed feelings on it, though it does usually seem to occur in the type of pub I favour.  I got to the point of whirling around in desperation, and got a few sympathetic glances from the gnarly potato shaped geezers.  If only pubs knew the efforts I made to pay them a visit!  At least I got chance to memorise 'Pint of Pressed Rat and Warthog please' which could've been a tricky tongue twister t'otherwise.  Anyway, I loved the unfussy nature of the pub, and was happy to be left alone this time, as I'd not had any time to unwind since I left Churt all those hours ago.  Nice pub. 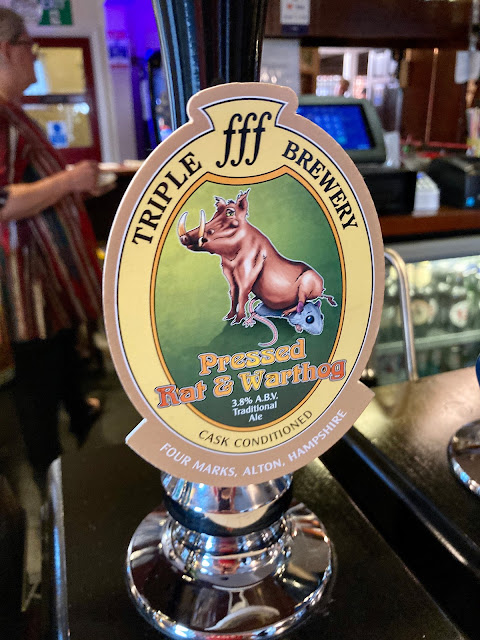 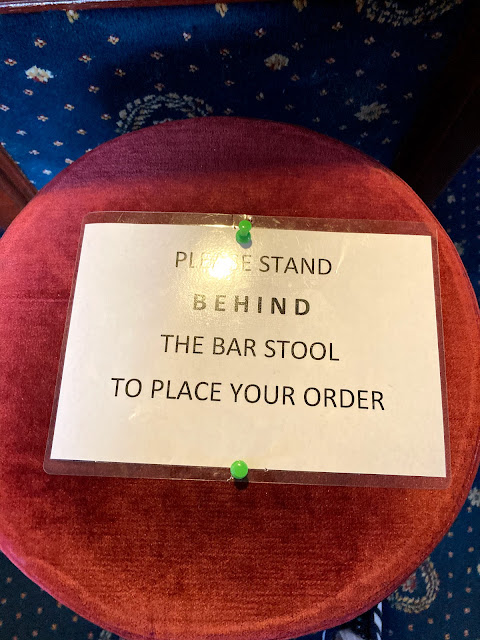 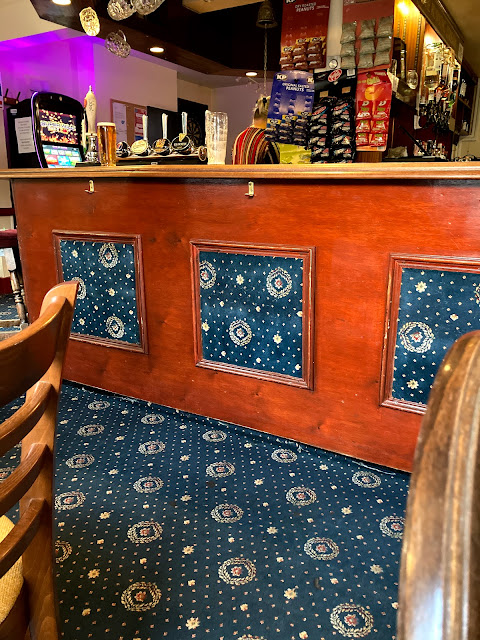 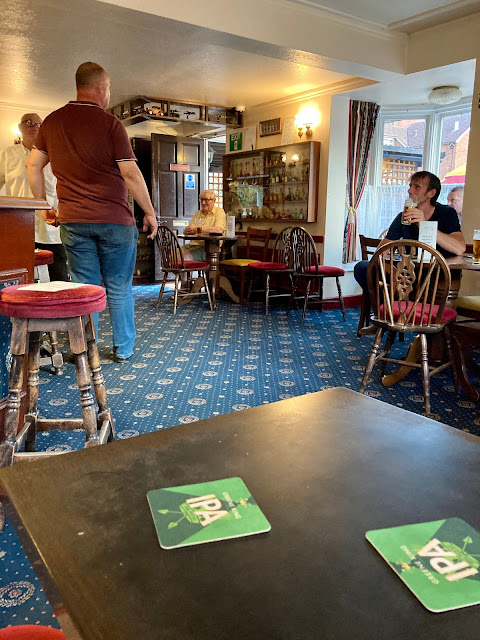 And so with dusk falling, I walked the short 0.7 miles over the Hants border, for my sixth and final tick of the day.  Isn't pub ticking great?  I could never have imagined, as I was walking through Farnham a couple of hours ago that I'd end up at here.

Okay, so I'd strayed from the Surrey plan, and of course it'd make me want to have a 'North Hampshire Holiday', but as I hit the outskirts of Aldershot, all I could feel was happiness.  What is Basingstoke like in October? 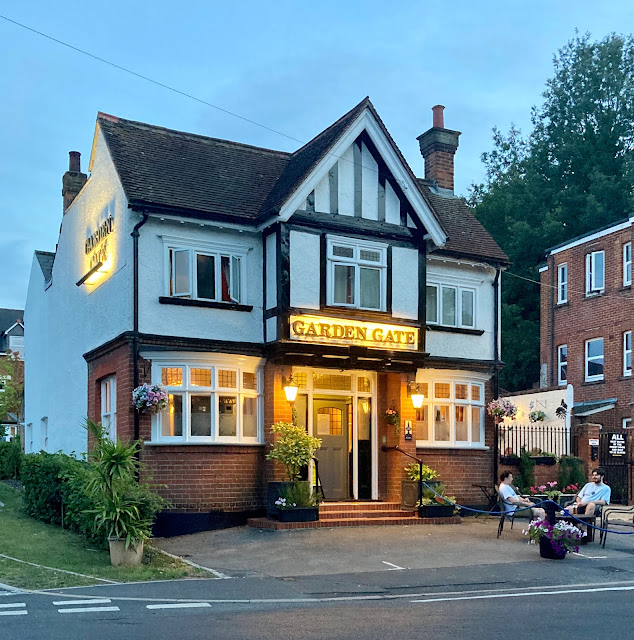 And a third consecutive, bona fide fair dinkum proper type of pub here at Garden Gate, Aldershot (1799 / 3016) which was more than I could've hoped for.  What a way to end July.  I walk in, immediately identified as a stranger, so the hand sanitiser and guest registration form comes down on me like a tonne of bricks, perhaps I shouldn't have stopped to 'do my hair' in the mirror and adjust my cauliflower.  The landlady was very friendly, and talked me through everything very slowly, perhaps suspecting I'd been out all day on the booze in the sun and was struggling to take information on board, as I kept sticking my tongue out in an effort to concentrate.  The bench seating, carpet, quality Twickenham ale and general rumbling of happy locals popping in for a cheeky 5 pints before last orders made for a lovely atmosphere, which offers hope Hants could be a decent county to rival Surrey pub wise.  This must be the gentle part of Aldershot too, from what people had been telling me!  I'll let you know when I get to the White Lion in October!  I probably lingered too long in the loos admiring the jokes on the wall, or whatever, cos when I came back, Colin was looking a bit shaken and this huge black dog and unforgiving looking owner were sniffing around.  You can't take your eye off your pub mascot, look what happened to Martin god rest his owlie soul.  Great way to end the night anyway. 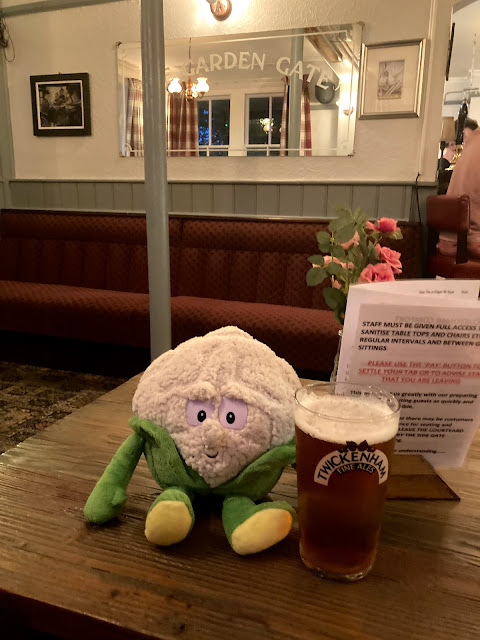 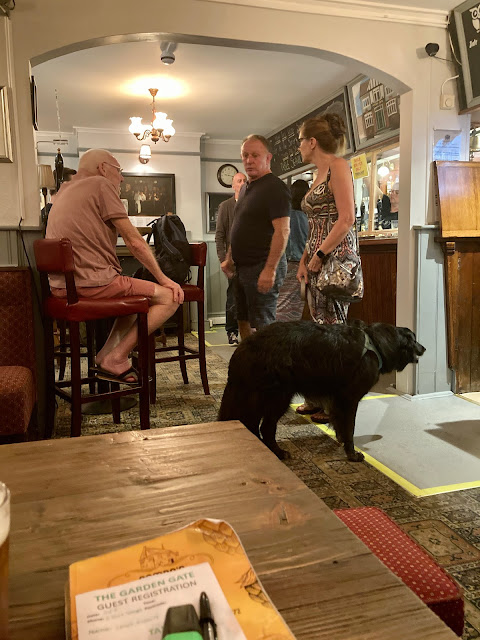 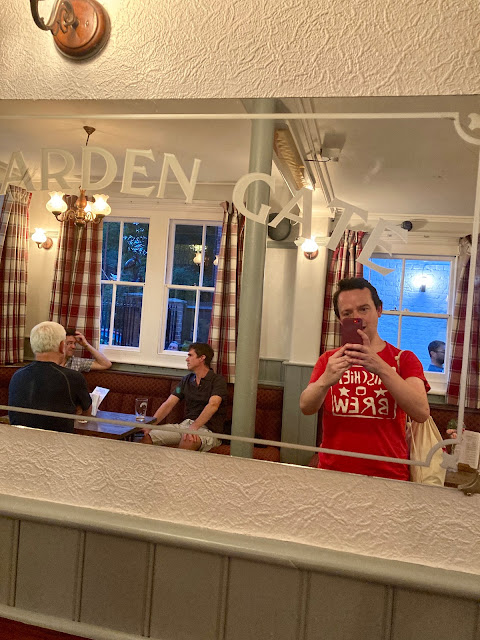 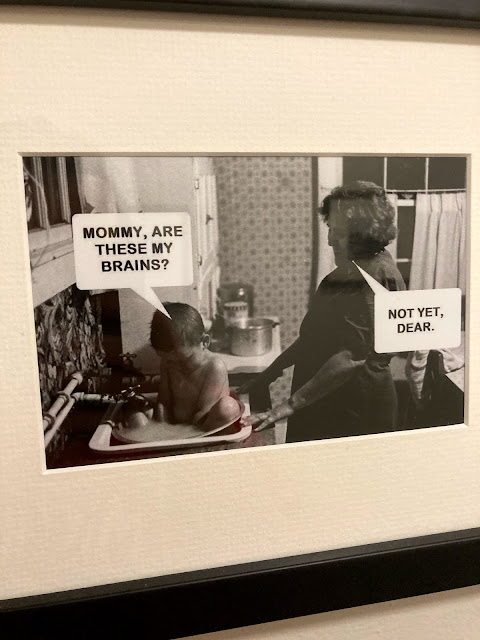 And even better, Aldershot station wasn't too far, and Aldershot to Guildford is quite an easy route, so I still got back in time  to buy my Tesco Express snacks and watch a bit of TV before tomorrow.

Two days left!  Join me for a Yorkshire Day Special in deepest darkest Surrey but as we've reached the end of July, we'll first have an interlude with a monthly review for July.