Friday was scorchio, peaking at 33 degrees, which wasn't really fair considering it turned out to be one of the most physically taxing days of my holiday.  Mileage wise, I didn't seem to be straying far from Guildford, but when trains are scarce and buses are tardy, and you are trying to get round six pubs, it doesn't exactly make for a winning combination.

Progress though, was being made, as I ventured south and west dangerously close to the forbidden land they call 'Hampshire'. 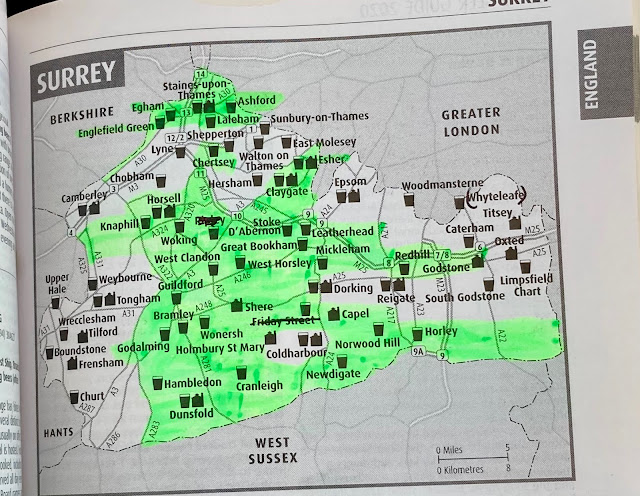 At Farnham station, it was already sweltering and I got chatting with an elderly Spanish couple who for some strange reason, had been waiting for this bus for an hour already.  A posh lanky bloke in a boater who reminded me of Lord Emsworth joined us.  Twenty five later, the number 19 bus finally arrived, and an extra five setting off as the elderly Spaniard man struggled to reverse his scooter into the disabled space.  And then the posh blokes hat flew off in the only gust of wind all day and I had to run after it!

The bus was packed to the coviddy gills with overweight families, spotty teens and blotchy snotty twilds all off to this place called Frensham Pond, a huge area of strangely blue water which makes it look more tropical, but might not be.  People float in it due to the high quantity of salty substances, probably.  The pub seemed much more appealing, but maybe that's just me.

Never have I been more relieved to get off a bus.  Little did I know what a struggle getting back on one would be!

A friendly group under a canopy had to direct me towards the slightly confusing entrance hidden around the back ..... 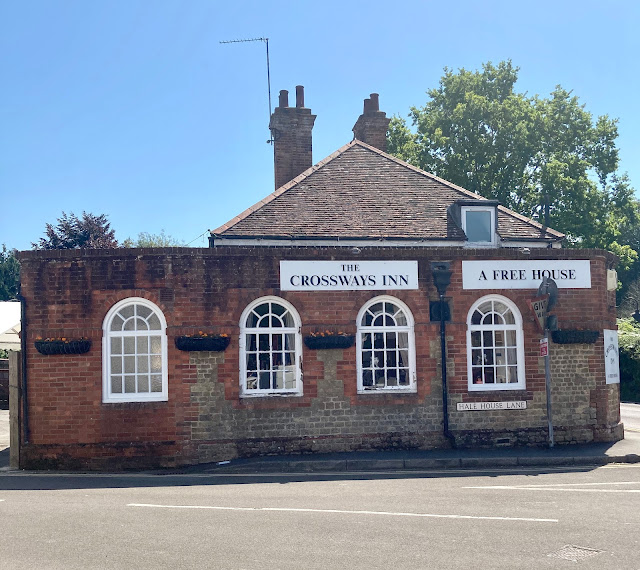 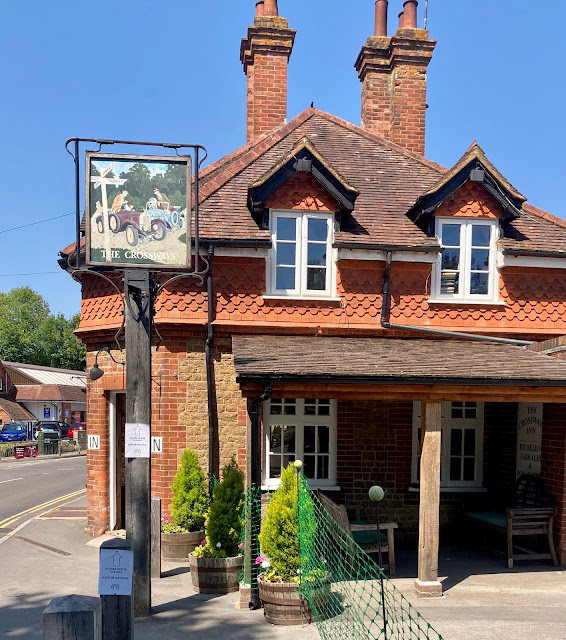 .... but I really need to stop being surprised at the greatness of some of these Surrey pubs.  Crossways Inn, Churt (1794 / 3011) was a pub I'd recommend to just about anyone, providing you can cope with a bit of bad language from the friendly, boisterous regulars.  Less lauded than Surrey Oaks, less visually striking than the Jolly Farmers in Bramley, but every bit as good as both.  The landlady made it, in a week of fabulous landlady's, and the sheer amount of generous tasters she gave me (I suspect I'd gone for her least favourite ale!) meant i probably came out of the pub an extra pint to the good!  One of the few pubs today too that managed to keep the beer cool.  The pub had a farmhouse sort of vibe, despite being dead centre on a village crossroads, and the tiled floors and basic bench seating in the side bar to the right allowed me to stay cool.  Despite the locals filling up the main bar, the landlady kept popping her head through the hatch for a chat with me and to make sure I was ok and enjoying the beer.  She even told me I could go over the road to the shop and eat my own food in the pub if I so desired.  Eventually I relented and joined the others in the main area, they thought BRAPA was a bit of a crazy concept but seemed to enjoy it.  "You must be facking thirsty!" croaked one to roars of laughter from his mates.  Colin hid in my bag at this point, needless to say, and one of the guys was originally from Leeds so he was quite excitable when he heard I worked there. 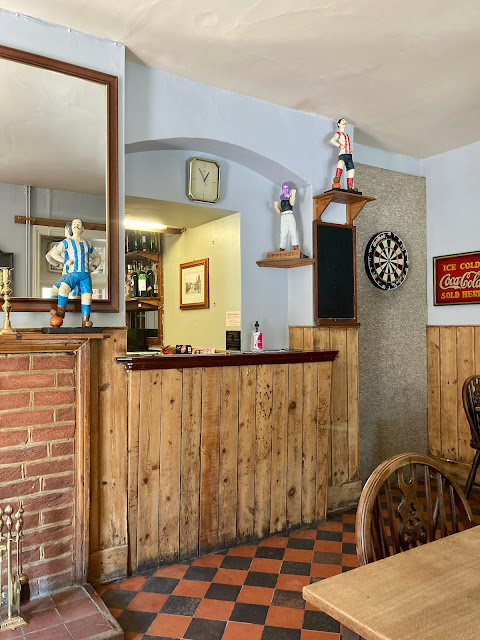 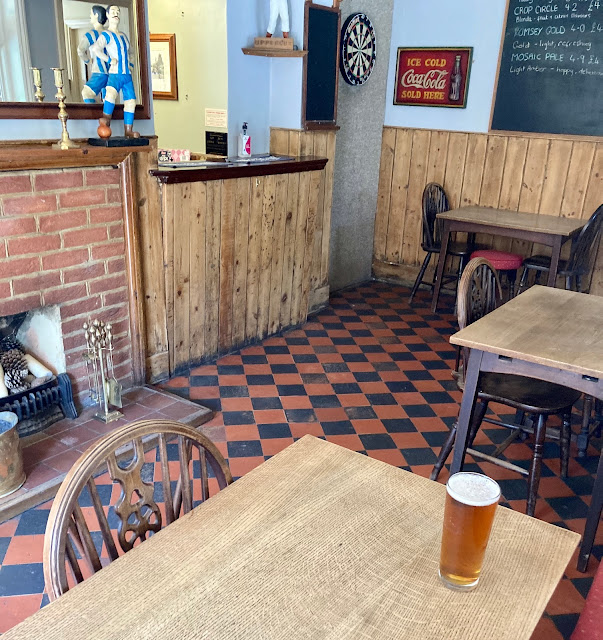 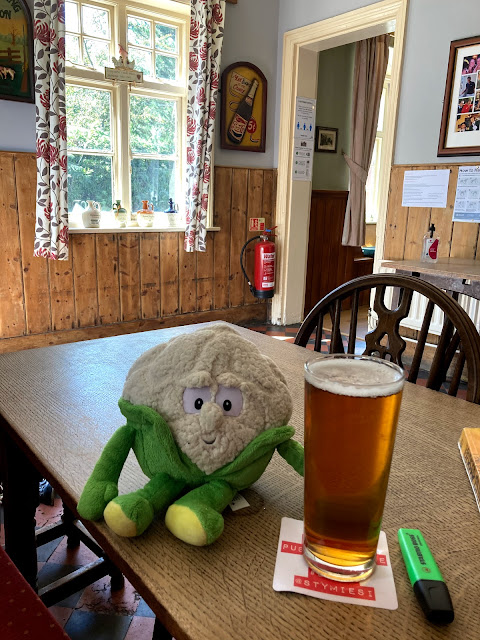 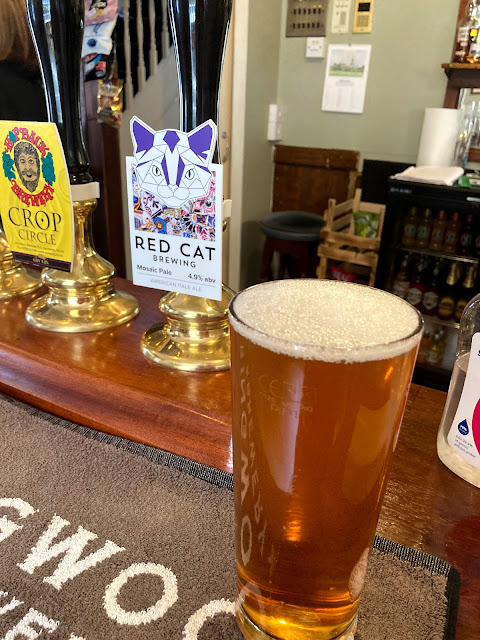 Too clever for my own good, unlucky, or just a bit rash?  It was hard to know how much to blame myself for the 100 minute wait I then had in the bus shelter as I tried to get back north from Churt.

You see, being 30 mins behind, I (probably incorrectly) assumed there was one bus on a loop, and when it got to the end of the line at Haslemere, it'd be the same one coming back up.  So I 'allowed' for this, and didn't return to the stop for 20 mins after the due time, seeing there was absolutely no way it could make up this time.

However, I think there must've been a second bus after all that HAD gone at the due time, which I therefore missed.  At least it was a proper shelter (i.e. sheltered from the sun), I had food and drink, and a secluded bramble hedge behind for a pee to save me the humiliation of returning to the pub!  My legs still have the scars of that hedge, over two weeks on!   SIX taxi numbers I tried, 3 didn't pick up, 2 couldn't help, and the wife of one just chatted to me in a mad shrill voice about everything else.  I wasn't in the mood.

A couple in a convertible eating ice cream looked like they might offer me a lift.  "Is there a beach near here?" he asks.  I tell them about Frensham pond.  "That's probably what we're thinking of!" and they speed off, with an outlandish wave.  Or was it a middle finger?  I later heard it might actually have a beach too!

Oh well, I'd avoided the peak of the extreme heat, and was totally sober again, by the time the next two hourly bus arrived and dropped me at a place called Lower Bourne which afforded a semi-rural walk to pub two.  It was beautifully situated on a stream, perhaps by a cricket pitch also because of the name, it seemed a bit too far off to be classed as 'Boundstone' but the GBG never lies ...... 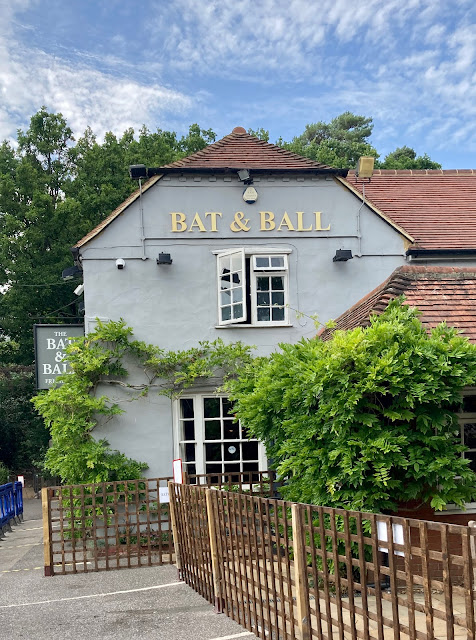 In a bit of a 360 degree shift from most of my pub experiences this week, Bat & Ball, Boundstone (1795 / 3012) was a pub that a few Surreyians I'd bumped into had told me good things about, but just left me totally flat.  The tone was set by the young guy who 'greeted' me, though it was more a snarl, when I explained I was just here for a drink and hadn't booked.  No other pub this week seemed to take the hump with me quite so much.  He put me outside near a couple of blokes where the leafiness provided a canopy above this trellising.  The two young ladies walking around were similarly sullen, and if there's one key theme I'd been impressed with all week in every pub had been the quality of staff. £3.95 for a pint of Hopback seemed pretty good, but the quality wasn't great.  It just seemed too warm and furry.  I know extreme heat and all, but am not sure that is a good enough excuse, don't pubs have cellars and stuff?  I don't know, you dear reader will have a better opinion on this subject than me.  The men, whose sole conversation topic had been fibreglass insulation (not enough to brighten my mood!) may or may not, have left without paying, as the staff had a bit of a confused conflab on the subject and became a bit animated for the first time!  Was just about to press 'Tweet' on my pub checking slagging the place off, when it all changed.  When I asked for the 'bill' early (of course it was a 'pay at the end' type of place), I ended up having a really nice chat with one of the barmaid's about people 'accidentally' running off without paying - mentioning no names of course Messrs Fibreglass.  Then, working theory, she went inside and told the other two "this guy is less of a dick than he looks" cos immediately, the other barmaid comes out, smiles sweetly, and asks if I can be tempted with another drink.  Then the previously rude bloke, comes out two mins later, smiles just as sweetly, asks if everything was okay for me!  Incredible turnaround, I was touched, proof you should never tweet until you've had the full pub experience!  But why couldn't it have started like this? 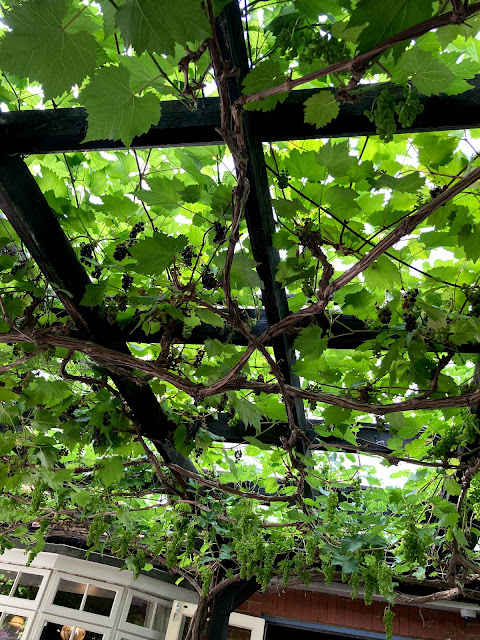 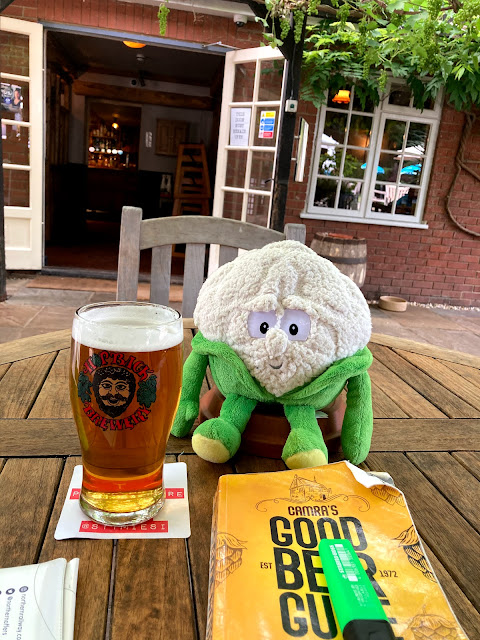 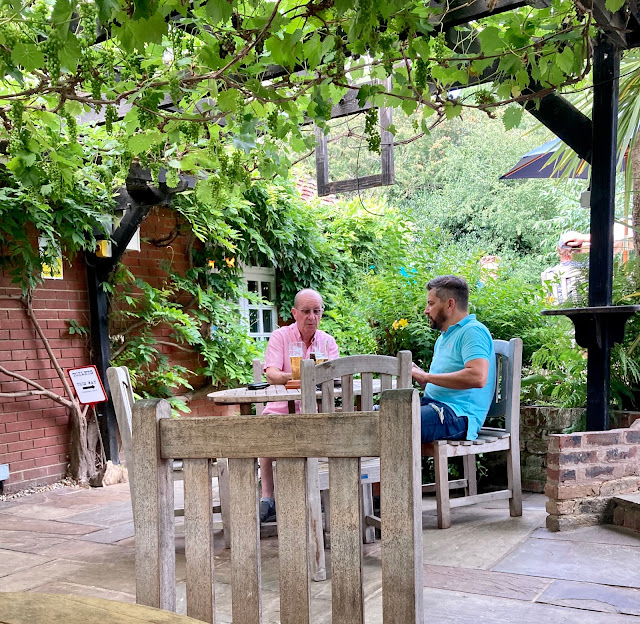 I managed to fathom out the stream crossing which suddenly made my third pub incredibly easy to walk to, even if it was on a hill. 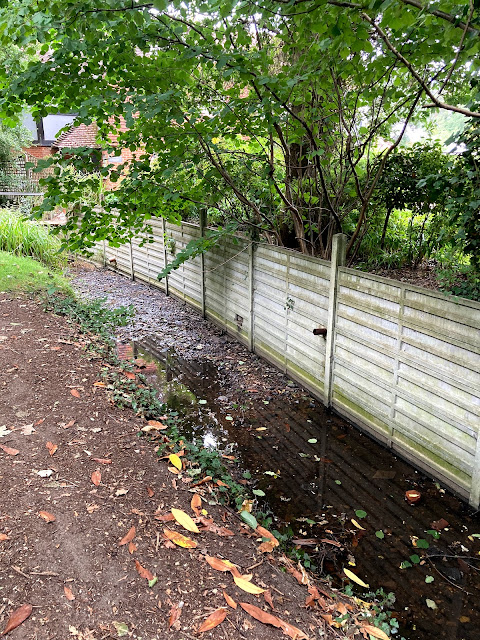 In fact, I'd go as far as to say it was the only easy, convenient thing that happened all day!  No rush getting here either, because depending on who you spoke to, which internet source you referred to, it was very open to debate whether the pub was opening 4pm or 5pm.

I arrived about 5pm, and was delighted to see the door nicely open and it sounded in full swing ........ 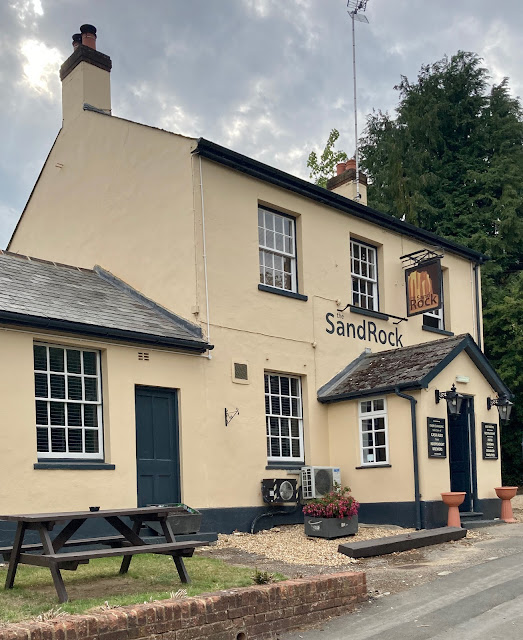 A capitalised letter in the middle of a pub name is always a bit of a red flag, but most sources say it is Sandrock, Wrecclessham (1796 / 3013) so we'll just assume the front of the pub isn't quite right.  That wouldn't be the only thing that 'wasn't quite right' about this pub.  Again, a few people I'd spoken to this week had positive things to say from it, but I wasn't exactly won over by it.  The young barman smirked at me like a school bully about to nick my lunch money, and was having far too much 'bantz' with the hidden locals out to the right to be remotely interested in serving me.  The beer again was Hopback, and again was far warmer than you'd like.  A theme was developing here.  The interior was extremely drab, grey, stark and uncaring, heard the place sort of doubles as a Thai restaurant - about the only people who smiled were Thai staff in kitchens towards the back.  All that remained was to join a rugged bunch of locals smoking in the outdoor area, so much so, I'd basically become part of the circle, NOT that anyone made eye contact, never mind smiling.  Don't think they were unfriendly, just very 'locally local'.  There was an army of them, and when a lady with a pushchair turned up, everyone cooed , and then they did the same when a pregnant lady appeared.  Those two showed some signs of smileyness.  Heartening.  When one of them said "twenty, and one on the way!" it was hard to know whether they meant babies, beers or just people in their group.  A bit like Churt earlier, and pubs I'd go to later this night, the locals were noticeably more 'rumbustious' this side of Guildford.  A condition some suggested to me is evidence of 'The Aldershot Effect''.  And as much as I was enjoying this more 'stripped bare' face of Surrey, the SandRock wasn't a pub I was sad to see the back of. 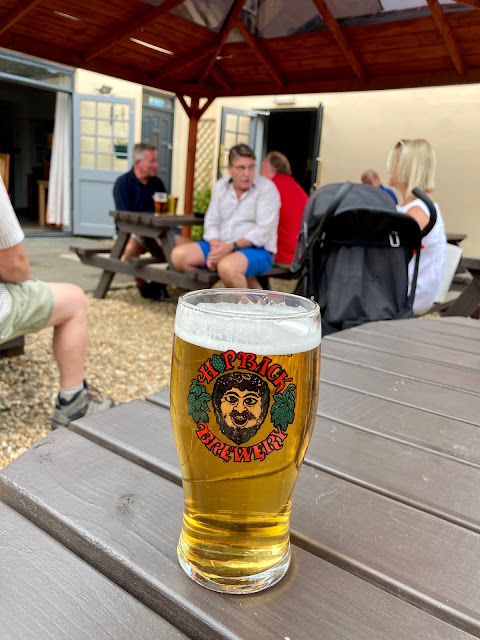 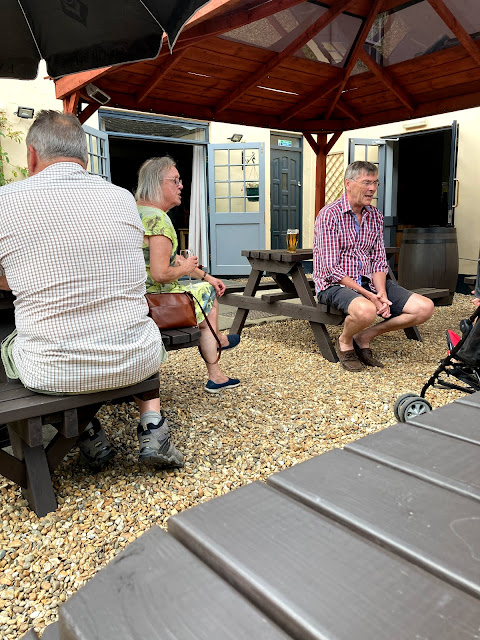 Time was ticking on, and getting the full six quota was surely odds against.  But it is funny how things can turn around when you least expect.  Join me for a quite amazing Part 14 tomorrow evening.