'Is he STILL writing about Surrey?'   Fear not dear reader, if you can prove you have read every part by answering a complex multiple choice question correctly, you will be entitled to a free BRAPA beermat, badge and sticker.  If you meet me in a GBG pub I've not been in before, on an odd date of the month, but not a Sunday.  Or in the south west. Other T&C's may apply.

Where was I?  That's right, Epsom, and a short walk from my 1802nd current Good Beer Guide tick, situated 'twixt a big pond and the 'Stamford Green Public Open Space'.  No surprise then that it was 100% undiluted posh Surrey.

Cricketers, Epsom (1802 / 3019) was no more memorable than Jolly Coopers, but that's not to say it was particularly poor in any way, just a bit OTT.  This seemed to be a 'no way you are sitting indoors' pub and at the entrance, a smart young gent hovered at a desk under a crazy wooden white structure gave me one of the more complex Covid Manifestos of the holiday, and once I'd Q coded, sanitised and solemnly sworn to adhere to all rules at all times, I was allocated table 27 where I chose to face the giant pond.  Watching coots, moorhens and Canada geese all vying for position on the bank was certainly the most interesting thing to happen here.  Once I'd 'adjusted' myself, I was told to follow the arrows indoors where you had to order from behind some of the week's thicker perspex, but pay a different staff member at a different window.  I was told not to wait for my drink, as they'd bring it out for me.  This was all a bit Krypton Factor-esque for a mind as fragile as mine. Always nice to see a customer even more unsuited to the pub than me, so when a tracksuited young Mark E Smith arrived, snarled, chatted to himself, drank a Guinness in about 5 minutes, and went back inside to try and find another, I had to respect him amidst the mummies, buggies, babies, bearded daddies and plummy voiced tanned elders.    He was up there with the water birds as my pub saviour.

Back into 'down town' Epsom, my third pub offered something very different from the previous two.  As a disclaimer, I'd just like to say now that I could see myself enjoying this pub 19/20 visits, so I imagine I was just unlucky today. 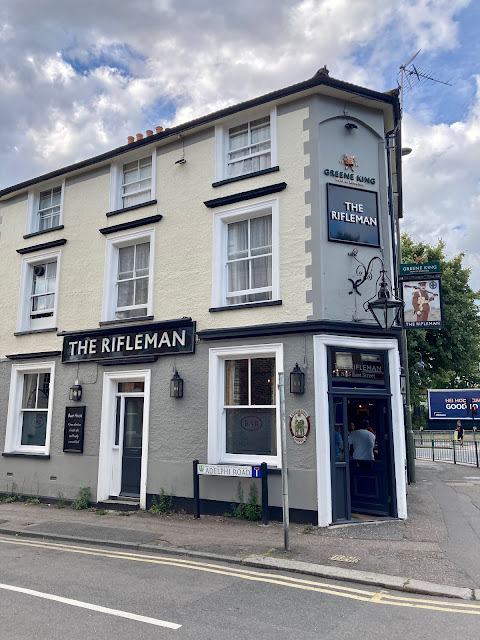 A bit like the Running Stream in Weybourne before it, the Rifleman, Epsom (1803 / 3020) was one of those surprisingly 'boozery' Greene King pubs, exactly the sort of interestingly shaped tight-knit pub you'd expect to find lurking mysteriously by a railway bridge.  Shocked on entrance, as it was a full on free-for-all with jolly blokes filling the floor space.  I glance up.  Of course, FA Cup Final, and suddenly it made sense that in the preceding days, I'd seen stern blackboards in many pubs saying "we will not be showing the cup final on this TV".  At the bar, I'd barely completed the 'transaction' and was just working out how I could reverse myself out of this tight space when the lady who serves me barks quite abruptly "you can't stand here!" and encourages me outside through the back door.   I had no intention of staying put, especially as I was worried my fat head was blocking the view of the screen for the guy to my left.  Pretty unimpressed, I perch on a table just outside the door, and maybe realising she'd been a bit abrupt, follows me out and says 'sorry but we can't have people stood at the bar' which is fine, if it wasn't for the fact a few locals were!  Plus the floor space was awash with folk.  I've deliberately avoided shaming pubs that haven't done enough Covid wise, but this was hypocritical.  If I'd been old Jack who comes in here every day, it'd be a different story.  And after Cricketers, well it is just one extreme to another, isn't it?   I didn't like the bench I was perched on either as a Mummy and Daddy were teaching ole' twildface different animal noises!  Luckily, I'd spied a perfectly formed garden area beyond this backyard, and my mood improved significantly as a couple of folk smiled, and a group of young 'Arsenal fans' who couldn't be bothered to watch the game relied on their excitable mate in a Pepe shirt to come outside and give them score updates.  Was 1-0 Chelsea when I arrived, 2-1 to Arsenal in end, so everyone seemed happy even though I'd have expected more Chels than Ars here, it wasn't the case!  My pint was top quality, and on the way out, I saw the same barmaid again but this time I smiled, said thanks and goodbye, because well, life is too short innit?

Back in Guildford, I was half tempted to call it a night, but a 4 pub total on a Saturday isn't really good enough (even though I could probably strike out Cobbett's in Dorking, for one guide at least)  so I decided to tackle Tongham.

My mind was a sea of logistics as I planned the timings, and noticing I didn't quite have enough time to bus it both ways, but the bus back went straight past my Travelodge, I could use my emergency taxi fund there, get my 'evening snacks' in Tongham, and get the bus back.

Knowing I'd not have much time to buy the snacks en route to bus stop if I was to spend 25 mins in the pub, I even did a virtual tour of the shop in advance so I knew the layout!  This was peak BRAPA planning. 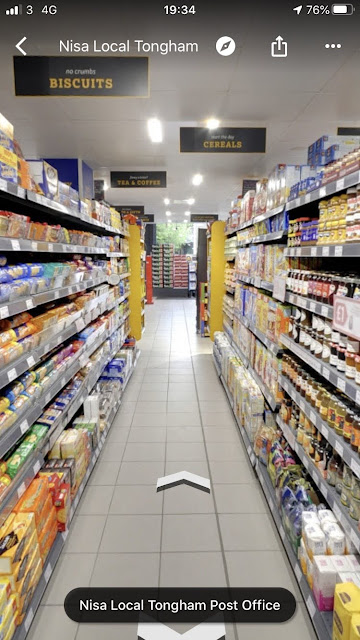 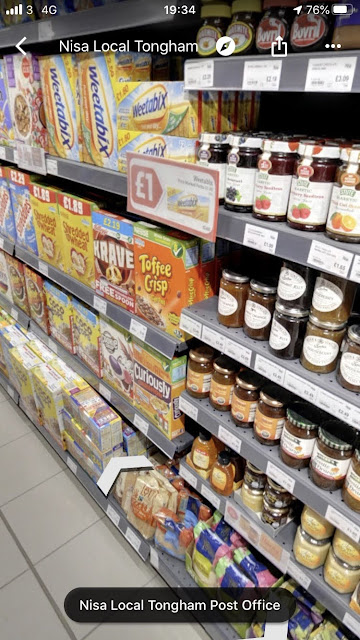 The taxi driver did the classic Surrey thing of thinking that getting me to Tongham was enough, and if we saw the pub, it was a bonus.

When i pointed it out, he quickly turned around at a junction and asked me if I was okay here, just the one busy road to cross, his fault if I get run over, so I said ok.

I shouldn't have been too shocked, being 'west o' Guildford' going out Aldershot way, but the White Hart, Tongham (1804 / 3021) had that same 'take no prisoners' atmosphere of some of yesterday's pubs in places like Wrecclesham, Upper Hale, Weybourne and Churt.  A kind young lad serves me, and I take my place in an inviting curved bench seating area on the right hand wall.  This is a refreshingly basic bar room, facing a screen which was initially showing FA Cup highlights, and eventually Pointless Celebs.  A drunk Michael Sheen (not on TV) wanders into my eyeline, does a weird dance with his elbows, and then gets into trouble for telling the barmaid he can't appreciate her new hairstyle cos he can only focus on her tits.  He's encouraged to leave, but he kind of staggered out anyway, and am glad cos didn't want him starting on Colin's man boobs (he calls them florets), we'd already decided not to make any eye contact with him.  The pub had barely caught its breath, when a panicky bloke comes in screaming "av' you seen my sunglasses?"  He makes a b line for my table, and is down between my legs groping about whilst myself and the barman have a brief look but are none the wiser.  He leaves, and his girlfriend comes in two minutes later and finds them immediately, in full view on the ledge Colin has been sitting underneath.  "BLIND TWAT!" she screams, and it was hard to know which of us she was addressing.  The staff then start watching videos of some kind of car rally/Formula One stuff on a phone, there is amazement on Pointless when Ken Hom chooses the overly obvious answer of David Walliams, and I realise I need to neck my pint and get to the Nisa Local, amazing how much you can pack into 25 minutes isn't it? 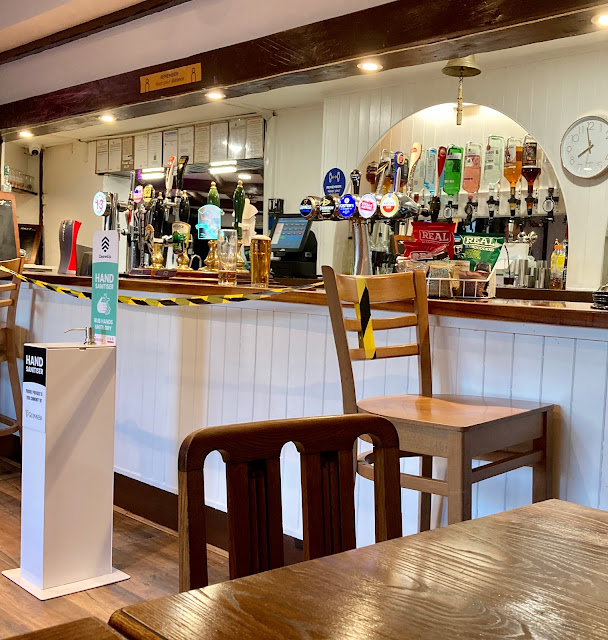 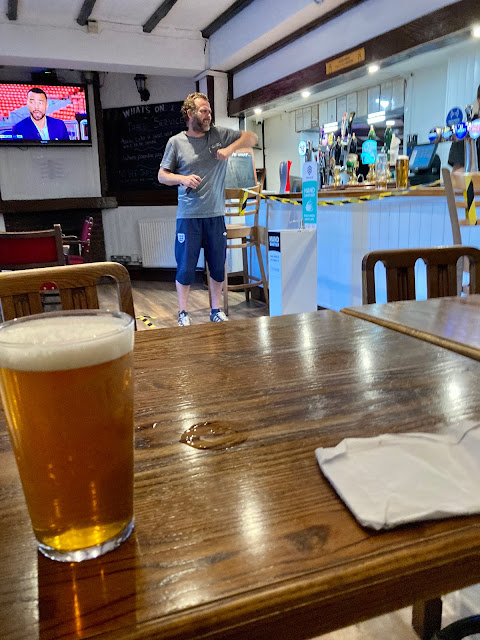 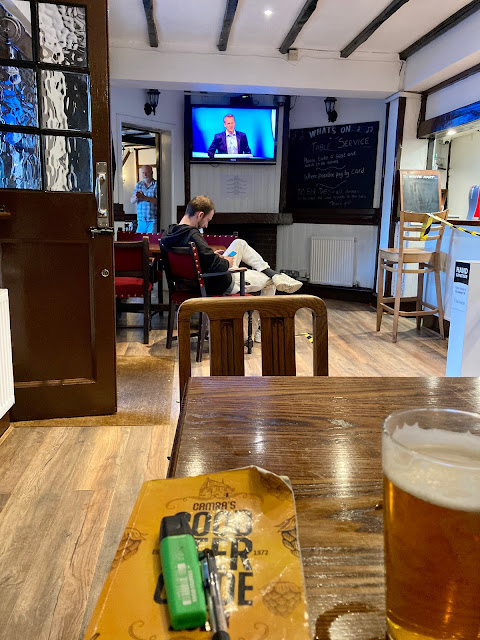 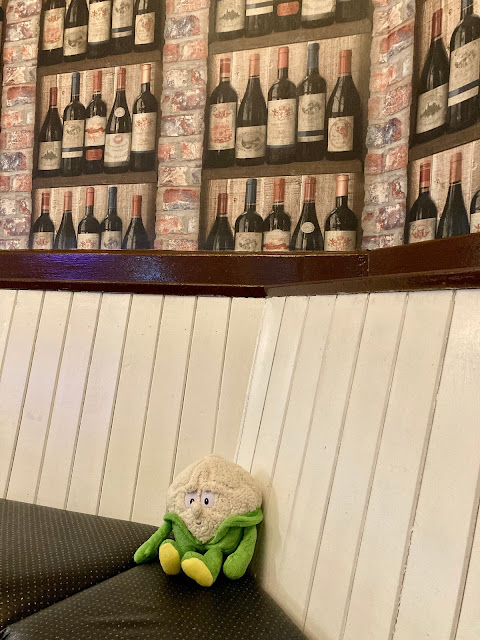 Nisa went well, but panic at the bus stop (is that an Emo band?) because the times on the stop don't match my App and were 10 minutes ago!

But there's one of those 'track live bus times by texting this number' things so I do, and the time it returns to me matches my App, and not what is on the stop!  Madness, relief, confusion, who is to say?  It doesn't matter.  As I look up, the bus trundles around the Tongham corner only 5 mins behind, and drops me right outside my Travelodge.  Great times.  Early night, last push tomorrow!