BRAPA is in ...... CROYDON : TOOK PROBLEM CAULI, TO THE BOXPARK MICRO

Annoyed on the train down because three Geordie twenty somethings had obviously decided mask-wearing wasn't for them.  I can't believe they all had hidden disabilities, unless being from Newcastle fits under that category?  In any case, they described Piers Morgan as 'mint' at one stage which probably says it all.

On the next train, from Victoria to East Croydon, the police were walking up and down checking.  Shame they weren't on the LNER.  I don't wanna die yet, far too many Good Beer Guide pubs to do.

I like Croydon.  It makes me feel alive.  Even in the murky, misty, slightly humid wild and windy morning drizzle.  It's like a Kate Bush song gone wrong innit?   Reminds me of my glory days of Leytonstone High Road back in the late 90's, or the time I went to Deptford.  True, there might be dog shit on every pavement, five fried chicken shops on every street, but as South East London goes, I just sense there's a element of local pride, humour and determination, amidst the hipster bulltwank, stabbings and fifty eight Deliveroo debasists trying to run me down.  The first three people I pass smile at me.  Name another SE post code where this would happen.

I feel liberated.  It is almost two whole weeks since Surrey, almost two weeks without a pint, and with my batteries recharged, I'm ready for action, feeling a bit bolshie, trying to strut like I actually know this place.

In truth, I've never quite cracked Croydon BRAPA-wise before today.  It's always been 'scraps'.  Passing through.  Post-football evening games at Palace, Spreadeagle with my Dad, Ship o' Fools, that was a top 'Spoons, where did that go?  Late night Monday in winter Dog n Bell, George and Green Dragon at closing time.  Time to get my final three ticks polished off, and then to do the same at the less appealing Clapham Junction.

Long walk to South Croydon first but couldn't be arsed with the faff of connecting trains or buses, plus now I'm 'Working From Home', I need all the exercise I can get as my lifestyle is a lot more sedentary if that's the word.  I'm not looking it up, bloody sick of being weeks behind on my blog.  Sorry, seem to be in a feisty mood this evening.  Except I'm not sorry, fuck you all.  Unless my Mum or Dad are reading.  I'm kidding.  Fuck them too.  Can't play favourites.  Actually no, I love those two.

Apparently, I'm in the restaurant quarter now.  I'm glad my Guide told me, I'd never have known.  Cannot imagine putting a posh frock and some heels on and coming out here for a five star slap up effort down here, but who knows how it might change after dark.

First pub is a Wetherspoons.  Please don't be surprised.

Skylark, Croydon (1810 / 3027) and a good solid 'Spoons for starters.  Quite dark and dingy, and a group of old boys blink up at my arrival surprised to see I'm not one of their clan.  I order a beer called Sirius, very light, it doesn't taste of much but maybe that's the key at the beginning of a long day. Was gonna try and shoehorn a 'you cannot be sirius' gag in there, but decided against it.  Laurence must be the new team leader as the old boys coo "oooh, thank you Laurence ..... TEAM LEADER" whenever he walks past, and then giggle like naughty school boys whilst Laurence blinks into the middle distance and wonders if he's achieved his life's goal, or whether there's still more to come from him.   I read about Croydon airport, which sounds about as real as Consett airport, but actually, it was once a thing.  The bogs are upstairs, and glad I went, cos it helps me to establish an extra level of grandeur for this building, could've probably brought my pint up here and had a bit more natural light, but when in 'Spoons always best to sit near a group of old men in the dark talking about snooker if you want the full thrill of the experience. 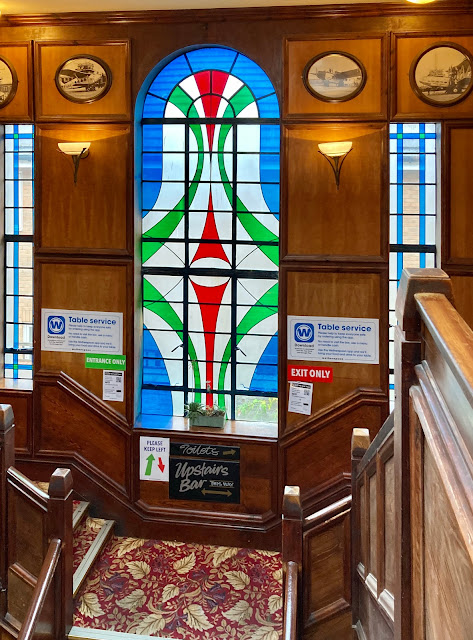 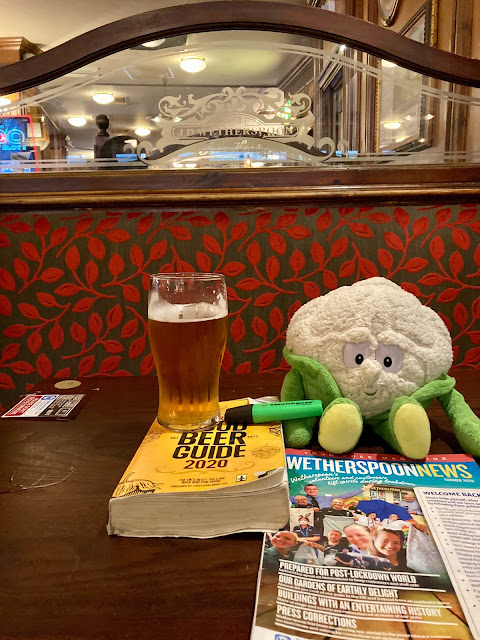 By the time I'd walked back to East Croydon station (Google maps taking me a more difficult way involving, as Jimmy Cliff once tried to sing, many fucking horrid roads to cross) and I was poised for a tricky entrance to today's second pub, knowing it was part of some larger development called Boxpark.  More like Poxbark.

The bouncer was such a basic bitch, the dog from Neighbours with the same name would've been more helpful, and he's been dead for years.  He tells me he'd never even heard of The Cronx and doubted it was part of Boxpark.  I had to scan a Q code to get something called a Black Card, register, get him to scan the thing I'd registered on my phone, bloody 'ell, this better be worth it (but it wasn't going to be worth it, was it?)

So I walk through Boxpark, the 'Unit' numbers starting in the 40's and going backwards, suggesting I'd definitely come in from the wrong end.  As I walk through, it is worse than I expected, a foul gut churning posturing hipster clusterfuck of yappity yap yap yap.  Only the more pretentious areas of Greater Manchester can compete with London for such wankery in my opinion, though I've not been to Coalville, Shitwick or Barry Island yet so can't really judge the UK as a whole.  Having said that, York now has 'Spark', an equal I'd never have expected of my home city which explains why Harrogate are now the dominant football force.

When I get to the far end, the numbers end at 7.  WTF, I ask a lady behind a catch-all bar which definitely isn't Cronx.  Turns out I have to leave, and go round the corner.  I probably didn't need to come in here at all, or did I?  Very confusing.  Oh well, next to Calypso Kitchen, I find it, relief!

So I walk in and tell the aquamarine haired legend behind the bar at Cronx, Croydon (1811 / 3028) about my crazy excursion around Boxpark to get me here, and she rolls her eyes at the bit about the bouncer having never heard of them as though it's exactly the kind of thing they'd do!  Really like her, down to earth, good sense of humour, very cool, very Croydon.  No cask on as apparently 'there isn't enough demand' so I go for some strong expensive portery stouty fizz to compensate.  It does the job.  She tells me it's her last day.  She doesn't look too disappointed.  And it's going to be my only visit here.  Unless I get kidnapped and brought her against my will.  She calls me to the door a few minutes later as there's traffic mayhem and I have to pretend I have a basic knowledge of the Croydon transport system.  Someone has removed some sign for a cordoned off area to make it look like a road has reopened, but when cars get so far, they realise it hasn't, and have to do a three point turn into oncoming traffic.  It is a surprise it isn't causing total carnage, but it makes for a more exciting outlook.  I'm not gonna slag of Cronx because you wouldn't come here for pub ambience, you'd come here either for socialising purposes or because you are a serious beer person drinking serious beer person drinks.  Bench seating, settles, vaults and snugs don't mean much to their intended clientele of that I'm sure.  Still, steady stream of customers means I'm not alone.  A father & son angrily debate footballers not signing contracts, before a dude walks up and says "I'd recognise that Cauliflower anywhere!"  That's a new one!  I ask him who the bloody hell he is, without saying that, and he says Citra.  Wow, another twitter pub legend BRAPA debutant, shame I've done the tick but he says he'll come to next pub with me.  Good times.  Like it when the day takes a twist, a citrus twist?  Hmmm, leave that one with me. 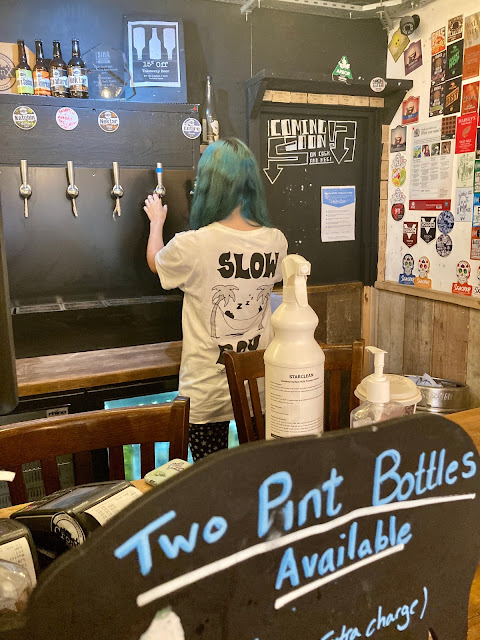 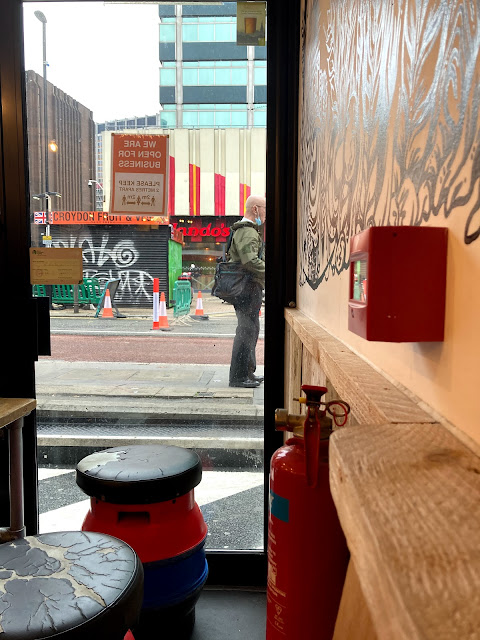 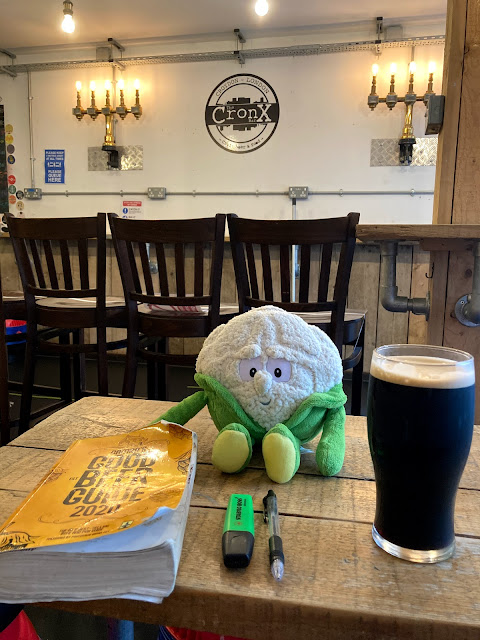 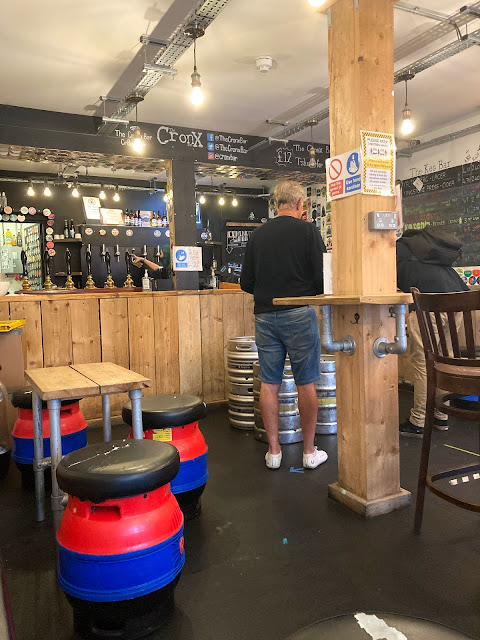 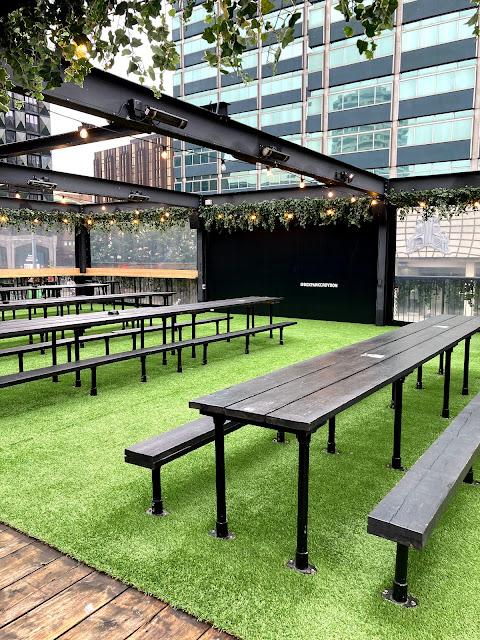 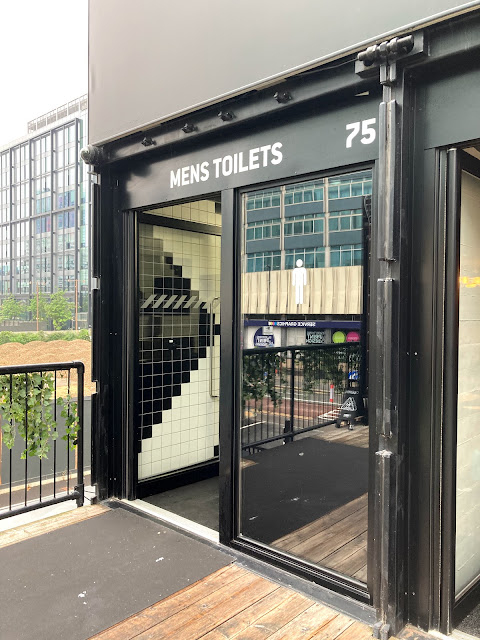 Even with Google Maps and both of us on the case, seemed a bit of a tricky one to find hidden up in the backstreets north east of the station. 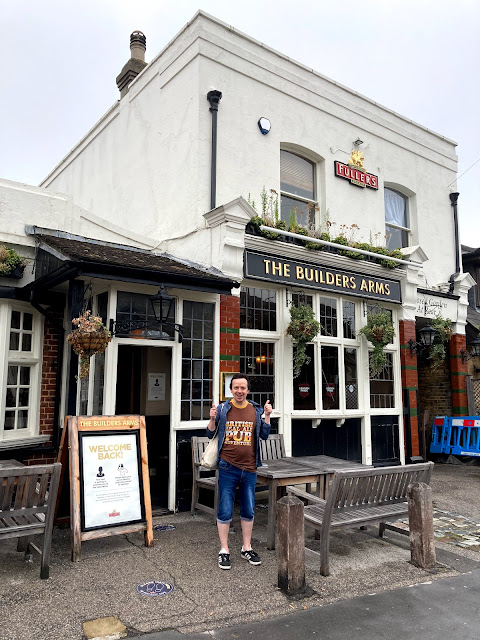 Builders Arms, Croydon (1812 / 3029), and breathe - well apart from the fact it was so warm n stuffy you couldn't, but this was more like it, a proper wooden basic old Fullers pub that felt reassuringly more drinker than dining led.  You never know quite what you are going to get from Fullers.  The two Eastern European ladies behind the bar seemed friendly to the point of being a bit hyper, to the point of being a bit mischievous, like there was some joke going on that we weren't party to.  Still no ESB, probably just as well, Pride and Dark Star Hophead still all they are doing.  The Hophead is top stuff.  After a bit of a wander, we settle in the back room behind the bar.  There's a bit of jukebox mayhem going on behind us, and despite the lack of people, the pub has a great atmosphere.  As we admire the chalk drawing of the Fullers Griffin thing on the board, one of the barmaid's pops up delighted, cos she's drawn it.  We tell her how talented she is, and that seems a nice way to finish our pints off and leave, Citra of course doing his debut green highlighting under the watchful gaze of Colin who loves it when we have a visitor. 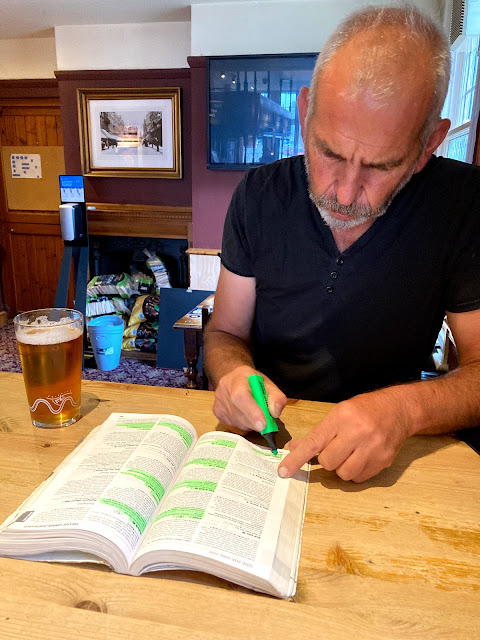 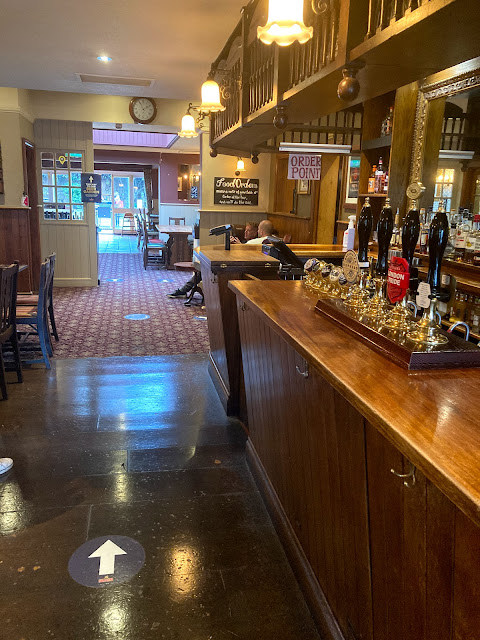 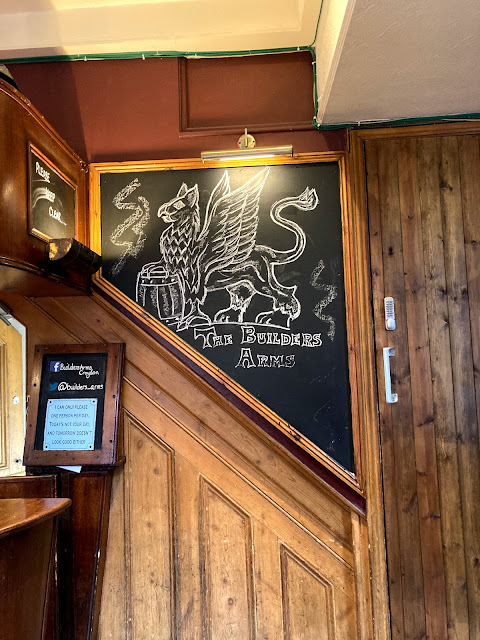 So, Croydon finally greened off in full after over six years of trying.  Now for Clapham Junction.  Join me after the Bank Holiday weekend for tales of that one, as I have overnight southern trips to come.  And just when I my blogs were finally catching up.  Life can be so cruel!