BRAPA is ...... SURREY ABOUT THE BONUS EXTRA BLOG

And when I say 'bonus extra blog', what I mean to say is that, having told you all along that was a 17-parter,  I'm not going to suddenly admit to you that I miscounted and it should've been 18 parts.

As if I hadn't done enough crazy walking this holiday, I now decided to walk from Walton-on-Thames to Shepperton.  If there were buses, I couldn't see them.  To rub salt into the wound, the pub was a long way through Shepperton, more likely a place called Littleton.

When you need a pee, the last thing you want is for the pub to be located on a side road called Watersplash.

Still, as the Beautiful South once said, 'I kept it all in', and I even hovered by the entrance which had loomed over me quite suddenly and urgently, so I had to step back to get a sense of perspective.  This allowed a cheeky faced middle-ager with a face like a slab of processed tinned turkey to just nip in ahead of me.   It would prove costly.

Barley Mow, Shepperton (1808 / 3025) was the final real hurrah of this epic nine day Surrey BRAPA extravaganza.  It was like a beautiful time-warp.  Largely unfazed by the strangulation of strict restrictions, I'm not just talking pre-March, but you could've probably been in the 1980's, maybe even earlier.   You still had a track 'n trace, sanitiser and the thickest perspex screens of the week, but the pub was such a hive for gregarious old crocks, the threat of Covid probably didn't concern them anymore than an asteroid hitting their homes.  Hitting the pub, now that would be a cause for concern.  The last in a long line of 'wow, how has nobody told me about this cracker?' type of pubs, where I soon I posted about it, people were like "oh yeh yeh yeh, a true dyed in the wool classic".  Typical of my week.  The bloke who'd cheekily snuck in front of me had just finished up his order when a taxi pulled up outside the open door behind us.  He recognised them, and ended up having to buy another 4 drinks!    As locals shimmied in at the side of me to get cheeky refills, this probably was the longest wait for a drink all holiday, but that would be my only criticism here.  Even when I did get served, the perspex was so thick, she couldn't hear me.  Now one beer you don't want to be shouting at the top of your voice is 'Naked Ladies!', and yes, of course it went silent when I bellowed it a second time.  In fact, the only other time I remember choosing this ale, a similar thing happened.  Jan 2014, Happy Man, Englefield Green.  Quiet pub.  Had to repeat myself, just at the moment a ladies hockey team walked through the door.  Great pint, but am never ordering it again.  I sat on this table towards the far end amidst a bunch of Formula One enthusiasts, this was an ornate beauty, like a working man's Admiral Benbow in Penzance in some ways with less frivolous fun and more true grit!  Complimentary snacks on each table.  I was merely concerned with the bowl of peanuts (I'm allergic) infecting the crisps if someone had 'double dipped'.  It was only back in York about 5 days later that I realised in these 'restricted' times, shared snacks on tables is probably not something many pubs would be doing!  I scoffed the full bowl of crisps anyway and lived to tell the tale.  Fantastic pub. 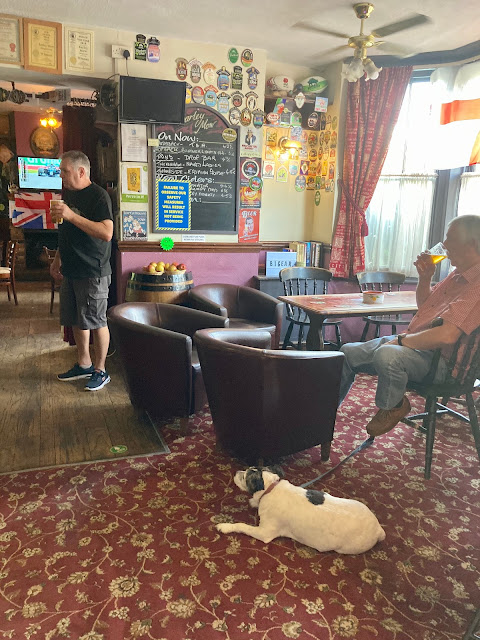 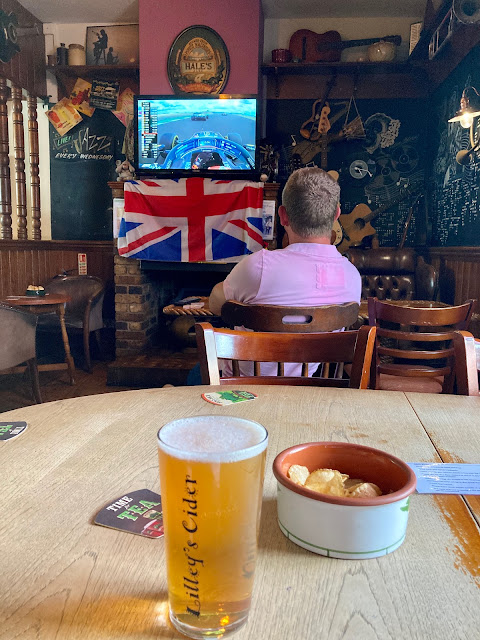 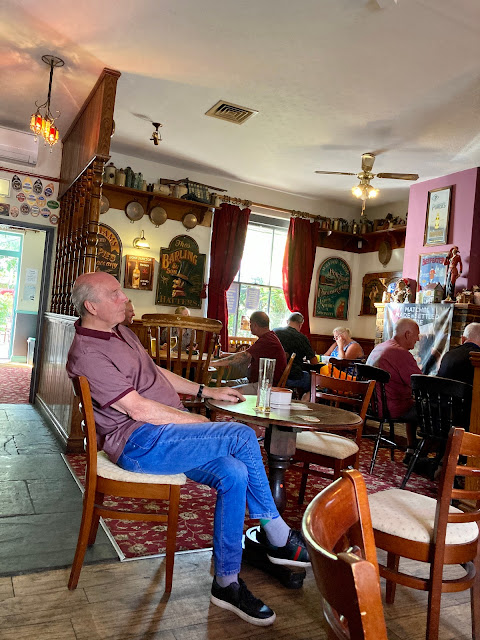 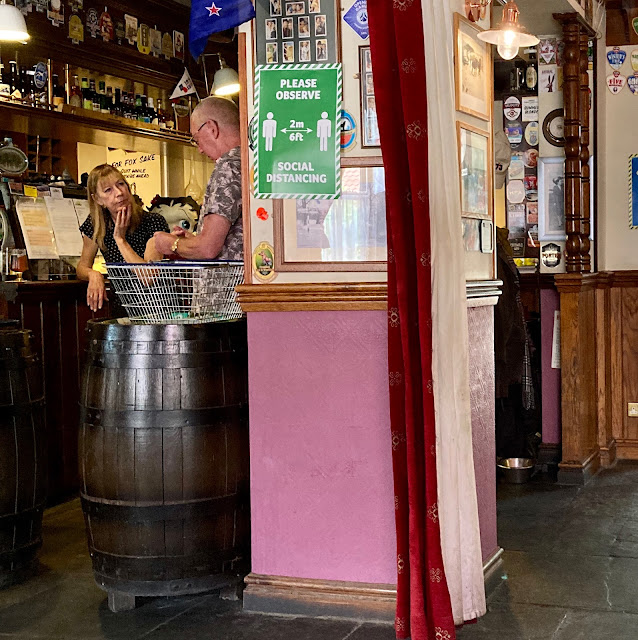 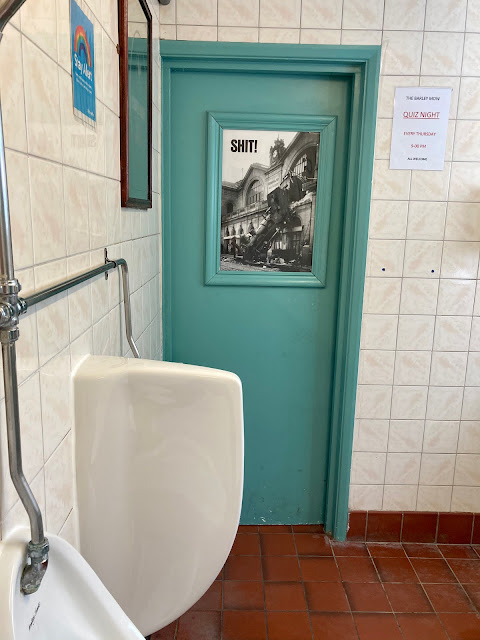 Incredible, I hope the above pictures give you a sense of the atmosphere, perhaps not the bottom one!  Back in the direction I'd come from, it was never my intention to walk ALL THE WAY to the next pub, for if I didn't pick up a bus, surely a train from Shepperton was imminent?

Wrong!  I'd just missed the hourly train, and decided it was best to just plough on in what had become a week of insane walking.  Past Upper Halliford, skirting around a few roadworks, and finally a long  straight path along the Thames, past Sunbury Park, got a bit stuck behind an eclectic mix of locals ..... 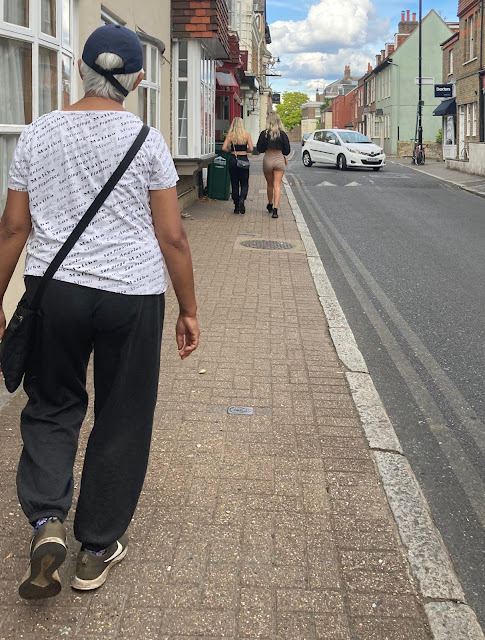 .... and just when hope seemed lost, the pub stood out on the corner like a beacon in the evening sunshine.

A bit like the George in Walton earlier today, I was quite shocked to walk in and see a totally deserted pub here at White Horse, Sunbury-on-Thames (1809 / 3026), wrapped in plastic as though the removal men were about to descend and remove all the contents!  I peered around and through some polythene wrapping, where a barmaid was hiding.  I felt obliged to ask if I could even get a drink!  London Pride it was, and I'm delighted to tell you it was drinking extremely well.  No way I was staying in this bore-hole though, and luckily a courtyard offered some much needed life, eventually.  At first, everyone was just sat stock still, like they'd been incapacitated by some Spanish flu style thing(!)  But when a guy points at a flower on the wall of the pub and asks a lady on a neighbouring table what it is, she tells them Begonia.  Or was she saying 'be gone with ya?'  Whatever, him and his mate spent the next five minutes slurring the word Begonia.  They were determined to squeeze a few R's into it.  Get the R rate up maybe.  And when they got bored of that, they started singing Mull of Kintyre in a West Country accent, and seemed a bit surprised when no one else joined in.  What with all the social distancing, the week had been lacking true classic BRAPA moments of strangeness, so this was a pleasing end! 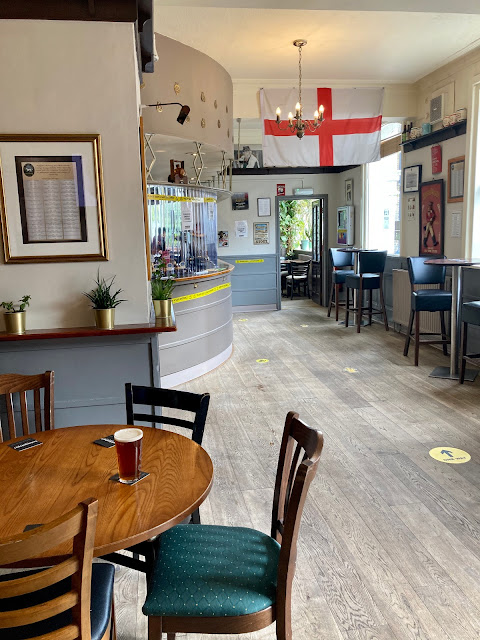 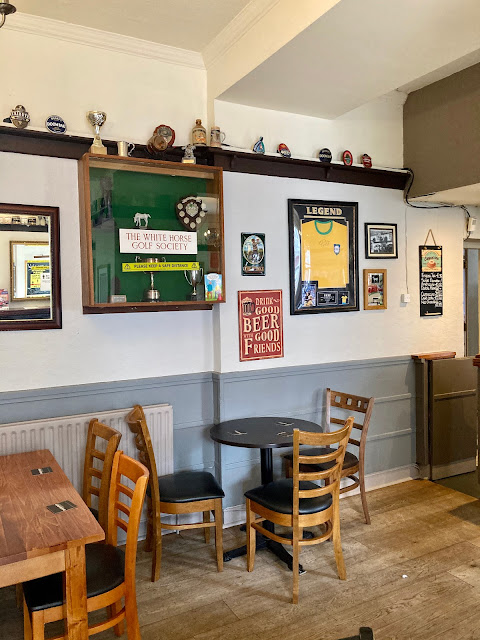 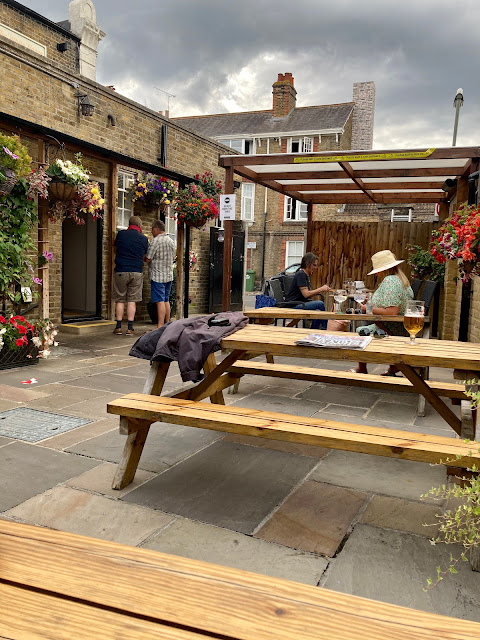 And I nearly, so nearly, went in for a cheeky 52nd pub tick as one of the many places I had to change from Sunbury to get back to Guildford was Surbiton, where I knew from a previous trip with Tom Irvin and Father BRAPA there was a very ornate 'Spoons just outside the station called Coronation Hall.

But because I was on a slightly dubious ticketing arrangement, and the 'manoeuvring'  on the train lines was rather intricate, I decided the safest, simplest thing was to get back to Guildford and have my 'post match debriefing' there.

And it seemed apt to end my journey at the place it all began, a week the previous Saturday at 10am at the Rodboro Buildings Wetherspoons.  The people were a lot crazier on this Sunday night, and as I sipped my TEA (Traditional English Ale if you wondered), I had to feel content.  51 pubs ticked, 52.5 pints drunk (plus 4 tasters), spent approx £215 on beer, walked 87 miles (and that is actually a conservative estimate), £50 spent on taxis, and who knows what on food, buses, trains etc.

Still time for one last moment of joy, as two lads who don't know each other are introduced by a mutual friend.  One of the two lads decides to tell of a 'conquest' with a Claire Taylor, and the fact he was acting like some kind of super stud was all the more amusing as he had the voice of that "in 1984, no one died, in 1985 no one died" guy from The Day Today, I think played by Steve Coogan.   They met at Popworld.  Ultimately, he had to break her heart the following day.  "I wanted a walk around Petersfield Pond, but she wanted much more than that.  We went to lunch at Wetherspoons, and that was it".

Just shows if you get into the nooks and crannies of any county, gems can be found, well apart from maybe Bucks and Beds.

Of those I missed, well Dorking and Reigate can go to hell cos I tried.  Whyteleafe last I heard was just acting as a shop.  Camberley, Chobham and Lyne I might try and get done when I'm over Hampshire way in October.  The others I'm going to try and have a crack at over the forthcoming bank holiday weekend, combined with a cheeky bit of West and South London, but strategically avoiding Wimbledon area as Hull City go there in 2020/21 and it could be a fun day with Tom, Dad and my Cauliflower.

See you all tomorrow at the earlier time of 9pm when we'll have a few serious thoughts about Croydon and it what means.