I'd enjoyed Redhill more than anyone on the planet had ever done before, and the feel good factor on Day Two of this epic Surrey pub ticking adventure extended into Reigate.
It might only be a couple of miles from Redhill, but Reigate is the posher Surrey gentle market town that you picture in your mind's eye.  Famous residents include Charlie the parrot, who Churchill (not the dog) taught to curse Hitler.  Terrifying puppet Lord Charles also lived here.
The chance of meeting further Charlies seemed strong.  Anything with the words 'Brewery', 'Tap' and 'Room' in the name doesn't inspire much confidence in me, but in a week of surprises, I was ready to be 'coloured impressed' here too ........ 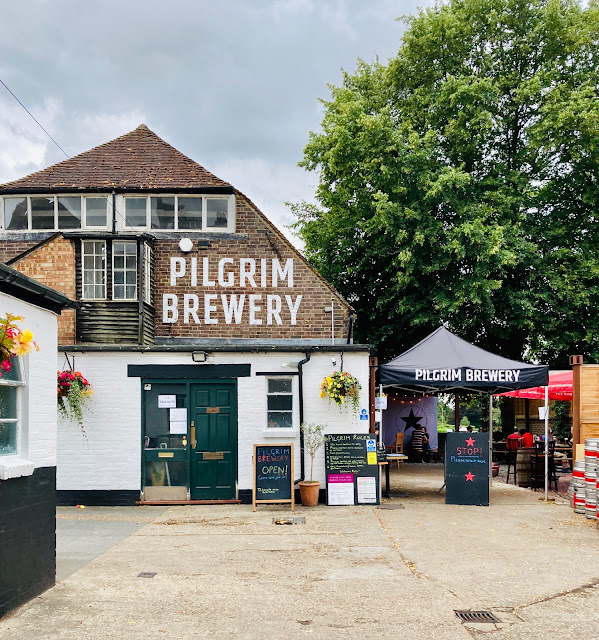 A bit like the cheese of similar name, Pilgrim Brewery Tap Room (1768 / 2985) had a maturity and a bite to it that similar examples often fall short on.  I later heard (from a guy we'll meet tomorrow) that after Hillier's Kentish offering, this is one of the earliest micros in the country.  My first since lockdown but it was not restrictive in the slightest, the two auburn top-knotted bearded dudes (at least one must've been a Charlie) were a touch of class and couldn't do enough to make this strange loner and his silly little cauliflower feel welcome.  More first name terms .... 'here's your drink Simon (and Colin)', a partial view of a cricket pitch just behind the brewery, a real quality pint (as it should be) and a chat on how useful track & trace can be when a drunken bloke left his very expensive bike here - which makes me feel less bad for losing mascots and GBG's - and they were able to ring around and return it for him.  Strangers smiled, before a strong gust of wind blew my 'planning papers' onto the floor, and then the rains came, and I don't know if rain is particularly acidic in Reigate, but everyone scurried like their skin was in danger to move to more sheltered parts.   That was my cue to leave. 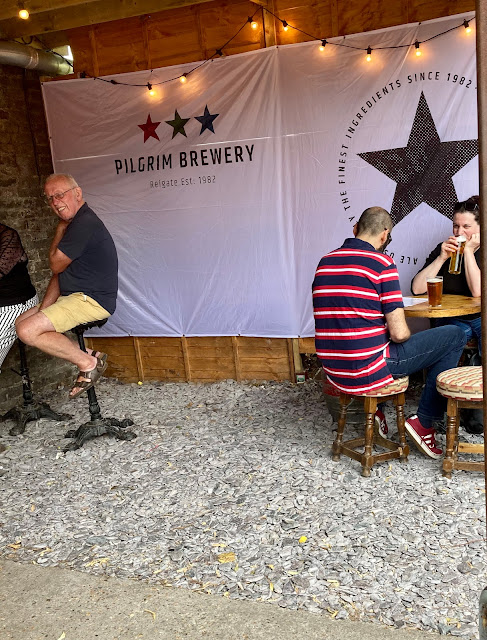 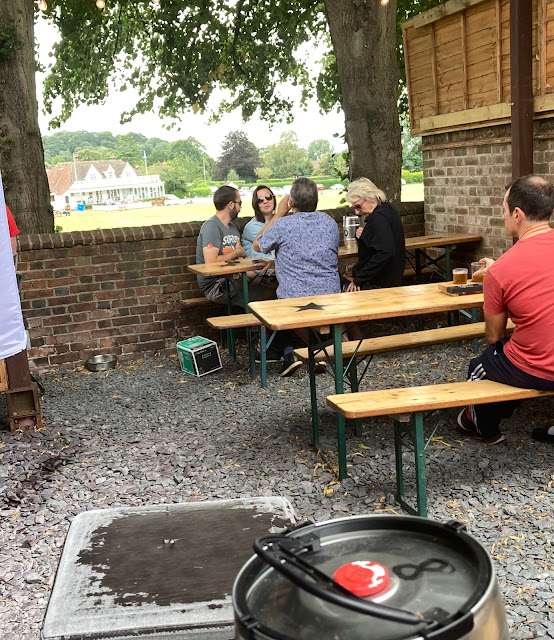 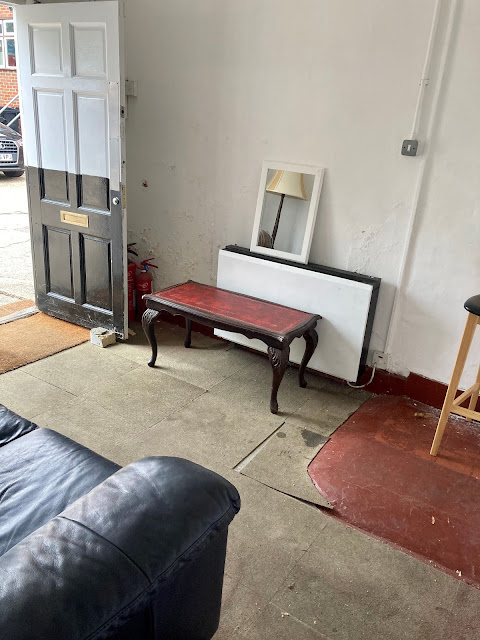 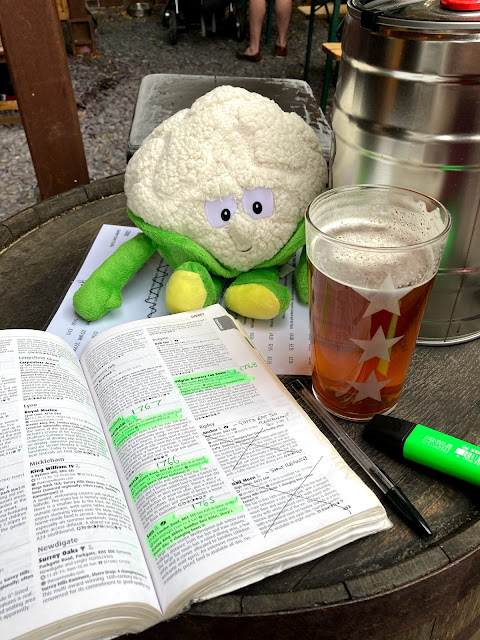 Today had gone far too smoothly, something HAD to get a teensy bit fucked up.  And it did.  My other Reigate pub tick, the Bell Inn, a Greene King pub, had revised hours which were limited on the Sunday more than any other day (to 4pm opening) so as I approached and saw it looking very closed at 3:50pm, it was no big surprise so I stood on the corner opposite a huge, flouncy looking Fullers house and ate my Scotch Egg with disdain (as you do, but probably not in Reigate).
The time ticked on well past 4pm and no signs of life.  Strange that they should specifically choose the much later opening time of 4pm on a Sunday, and then not stick to it! 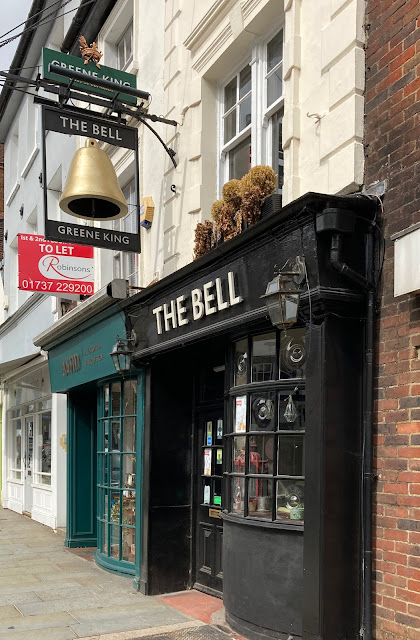 'What would Martin do?' is often my first thought in hard pub ticking times so I took a few pictures of the quirky things on the same street to amuse myself ....... 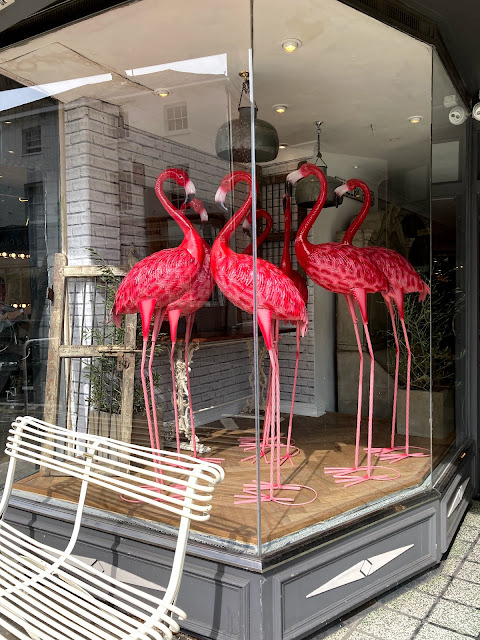 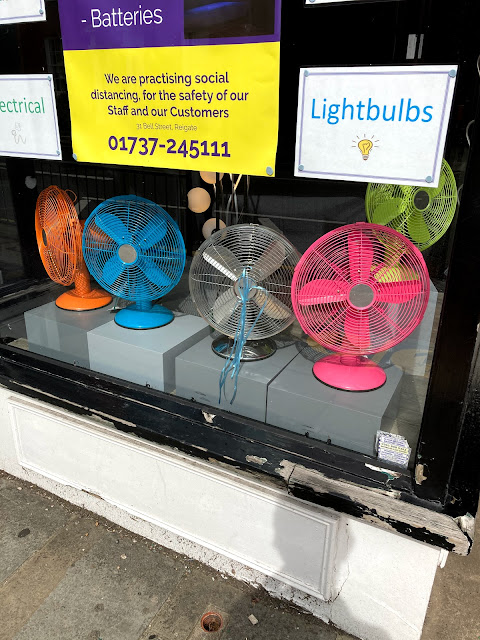 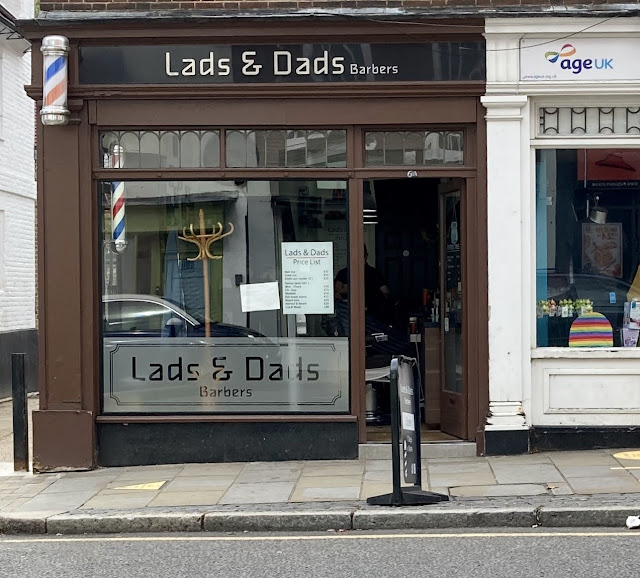 I couldn't linger forever, and as the clocked ticked towards half past, I decided to give up and head back towards to railway station for another new town, Dorking.
Looked like it might be a craphole on first glance, but once you got into the centre, you realised it was more 'real' Reigate than 'brutally honest' Redhill, but with an added friendliness and a sort of humour that was hard to define.  Like it wasn't trying to be amusing, but was almost a parody of a Surrey town, if that makes sense. 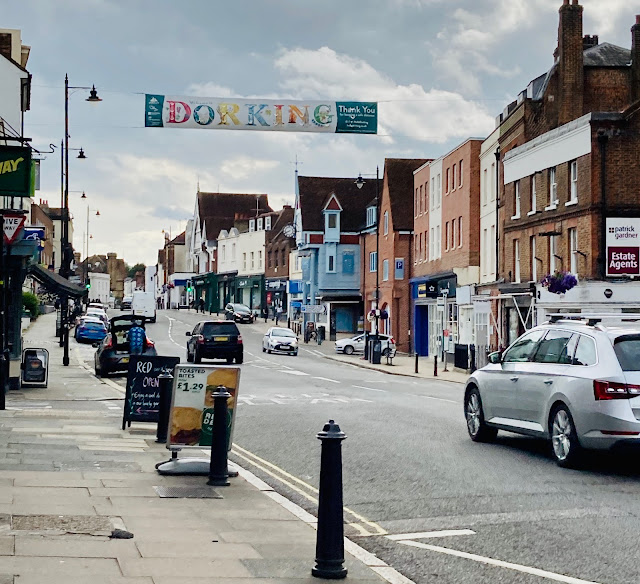 Still, it proved even more unlucky as a pub-ticking town than Reigate.   Cricketers, as mentioned in part one, was closed for the entirety of my holiday.  And today was the first of three Cobbett's fails, the micropub closing as early as 4pm on a Sunday.  That left one more ....... this is it ...... 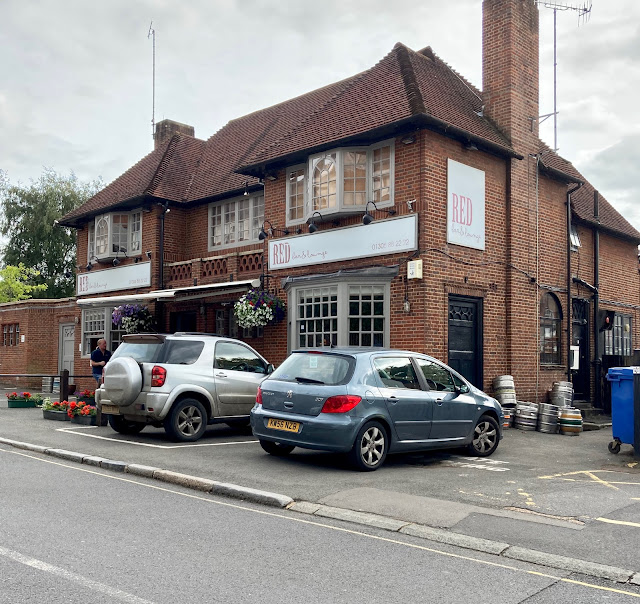 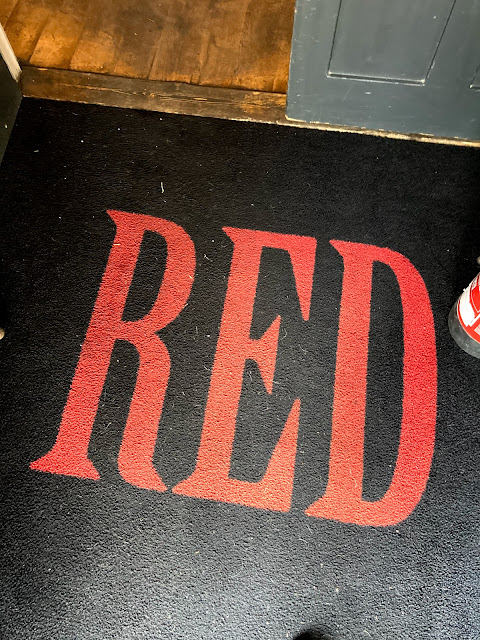 Credit the Red Bar & Lounge (1769 / 2986) for being the one Dorking pub to allow me get in, and even this turned out to be lucky on my part, as the owner tells me that she'd just called last orders so every chance I'd have been too late had I hung around any longer for that Reigate pub.  Pub ticking serendipity, and karma and luck and all of that.  But the truth of the matter is that this place didn't really cut the mustard.  A pretty soulless modern style bar, why call a place 'red' if there is absolutely no concession to a red colour scheme to add a bit of warmth, vim and vigour?  I'd like to see molten lava dripping off the walls and punk rock spewing like red rising damp from the depths.  Blokes in three quarter length shorts with tribal tattoos and women in strappy tops trotted happily between bar and outdoor smoking area, the music was of the bland dancey variety, and I was only saved really by an excellent pint of Dorking's finest Surrey XPA.   As I packed up to leave, and apologising if I'd lingered too long Cranberries style, I had a nice chat with Mrs Red and bemoaned Dorking seemingly closing down so early on a Sunday and in a rare moment of 'on the spot honesty' I told her I'd found the place lacking despite the quality ale.  You could just tell she was the kind of person who wouldn't take offence, and told me she'd run other pubs in the area but it is a struggle at present.  Personally, I'd be surprised if Red Bar is still here in the same guise, if at all, in five years time.  You can quote me on that when it wins CAMRA pub of the year 2025! 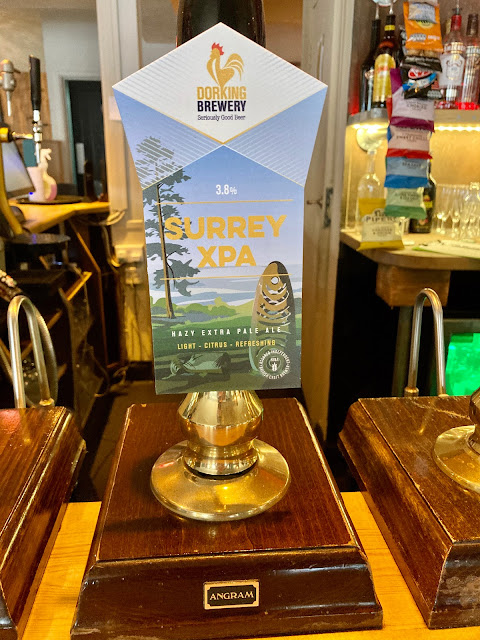 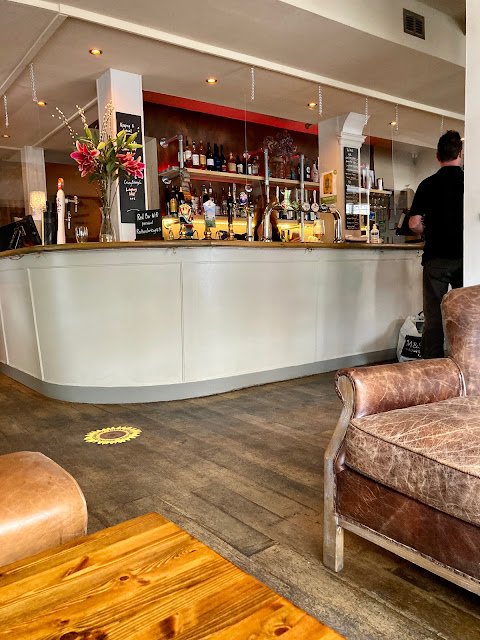 Back to Guildford then to try and salvage and sixth and final tick of a day which had ended up being much more of a struggle than had seemed the case when I was enjoying Redhill earlier.
And in a quite pretty churchyard location, hopes were high for my fourth and final Guildford tick..... 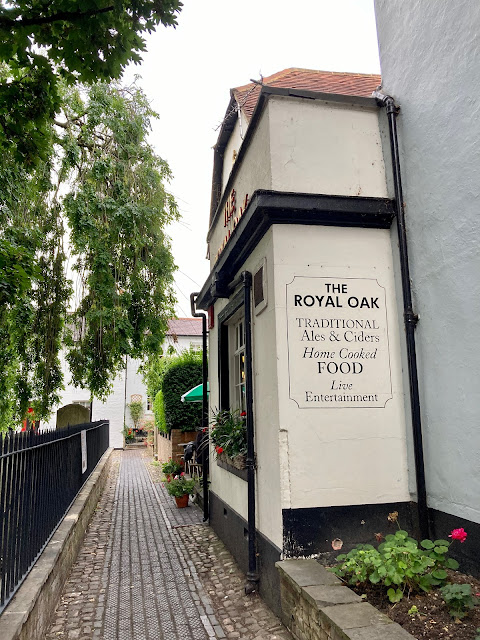 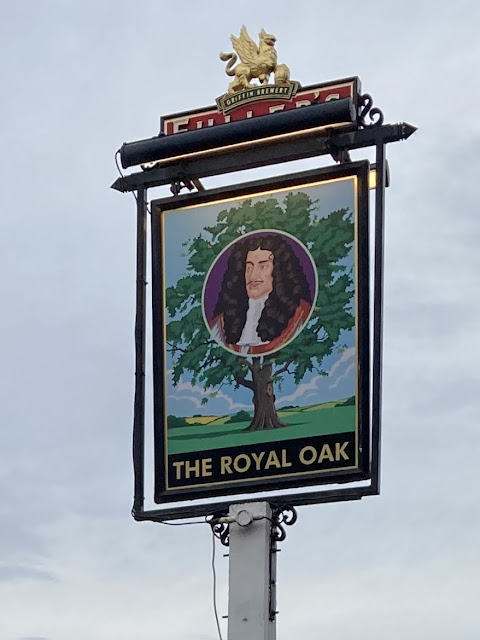 It is still a puzzle to me quite what wrong at the Royal Oak, Guildford (1770 / 2987).  It was the strongest of the Guildford suit in so many ways, and yet by the end, I've never been so relived to get out of a pub all week!  And that would include my dreadful Ashford tick the following morning.   It all started so promisingly here.  It was an ancient old creakfest, more characterful than the town's other Fullers house the King's Head, serving real ale since 1870, warped beams, wonderfully historic atmosphere.  This was enhanced by the two young lads serving, such great guys, hospitable throughout, the Pride was drinking as well as it did all week, and I drank a lot of Pride.  To the right was a fabulous tuck shop, including not only my favourite Tunnock's Caramel Wafers, but an ale based on it too,  I just had to buy a can to take out, which I did.  So it must've been the clientele.  The first indication was when a loud larger than life lady started jumping up animatedly on the spot when one of her male friends suggested Donald Trump might win another term, rocking the foundations.  Then one of the blokes said "you know what the worst thing about lockdown has been?  Not being able to buy a decent cut of meat from a proper butchers".  First world problems, perhaps?  But something about the enclosed characterful space amplified my annoyance.  A first since lockdown?  This is more how I normally feel in pubs.  Maybe I just hate people!  All the while, this strange old guy with a tearaway dog just sat side onto me, staring.  If I held his gaze long enough, he'd smile, but most of the time, he muttered to himself.  One minute, he was being gentle with his dog.  Next minute, he was murmuring threateningly to it that is was a little bastard.  His flip flopping moods put me on edge.  And then there were the young lads behind.  Perfectly normally when there were two or three of them.  But when the numbers expanded to six, seven, eight, they just became ridiculously camp.  Even Freddie Mercury would've been asking them to tone it down.  In a rare moment of joy, our Trump-Jump woman went up for a round, and faceplanted the perspex screen in spectacular comedy style.  I was crying into my Pride!  And a young lass sat by the bar having a pint of lager (think she used to work here) made the mistake of laughing, catching her eye, and then she couldn't get away from her for the next 15 minutes in the most awkward pub chat I heard all week.  "Awwww you are so pretty, ooooh are you XYZ's sister?" Jeez it was interminable.  I loved it, and hated it.  But mainly hated it.  With the old man feigning interest in his dog's whereabouts to the staff when he knew damn well it was under Camp David's chair, I'd had enough and could not get out quick enough.  This was Peak BRAPA. 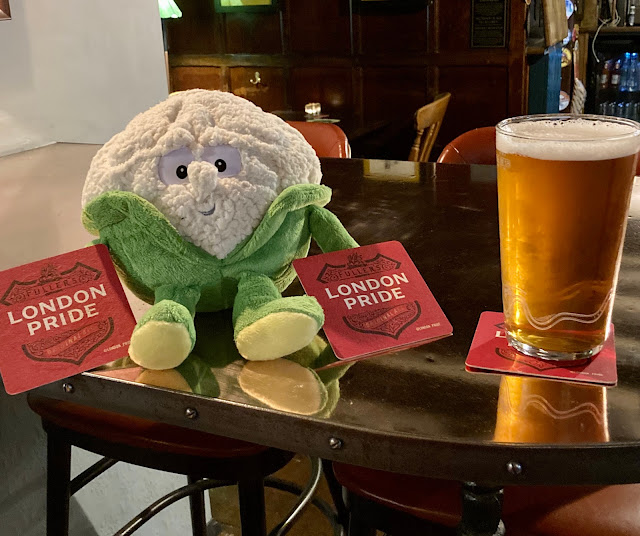 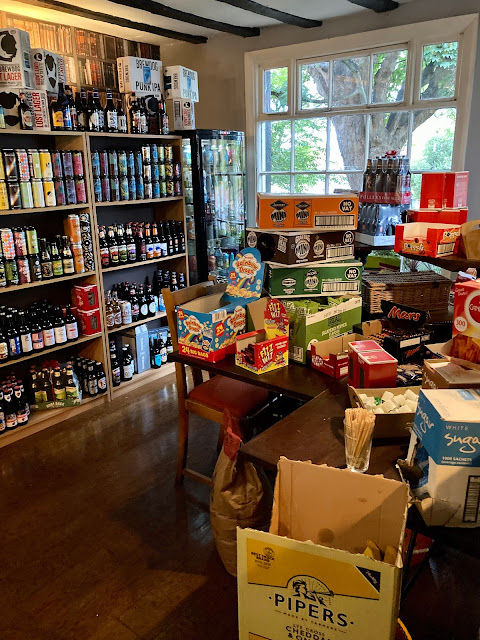 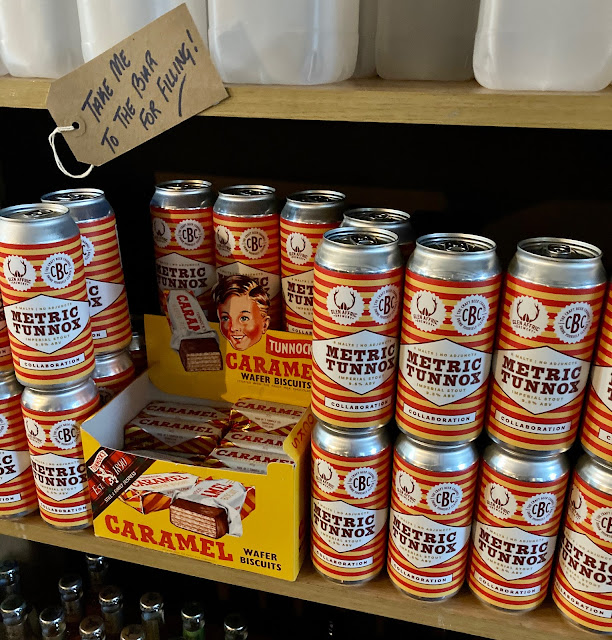 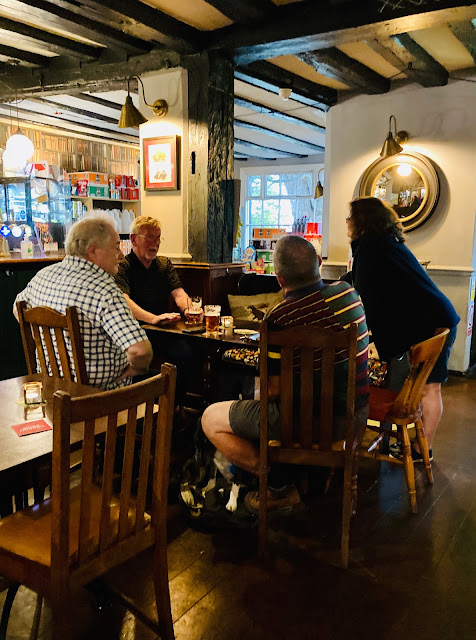 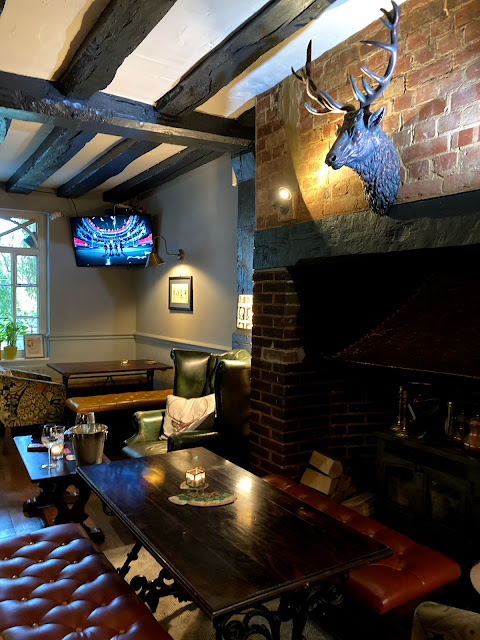 I was ready for a long lie down after that!  What would day three bring?  Well a terrible pub, but also a meeting with a quality Beer Twitter guy.  Join me for part 5 on Sunday night for tales of that.
Si
Posted by Si 'BRAPA' Everitt at 9:03 pm