If you were with me for Part 11 (you poor thing), you'll know that Part 12 begins with me in a taxi driven by a rather unconvincing old codger with little idea of where Dunsfold was, though I did keep referring to it as Dunsford, so that probably confused him.

Not quite sure he'd read the script of 'how being a taxi driver works' cos so overjoyed was he to find the village, he peered around in vain for the pub, before declaring "oh well, I'm sure you can find it from here" and dropped me off on a grass verge by the main drag.  Cheers pal, most helpful!

Luckily, the pub was the reddish brownish building I could see just peering out from around the corner ....... 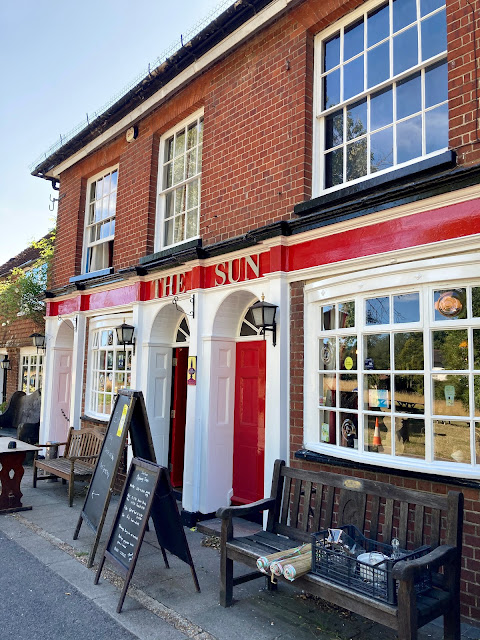 Giant perspex screens and social distance floor markings aside, it was immediately obvious that the Sun Inn, Dunsfold (1791 / 3008) was a bit of a low-key classic, chiming perfectly with my week so far of pleasant Surrey pub surprises around every corner.  Landlady Vonn made it, in a week of stand-out pub owners, she was particularly memorable.  Loved the fact that I was from York, as she is friends with the guvnor at the Swan, which is less than a ten minute walk from my flat, and definitely one of York's finest hostelries.  Small world innit, and here I was in deepest Surrey.  She told me tales of buying pubs back off evil pubcos, campaigning in London at parliament, taking on the big boys and winning.  And most impressively, running courses to encourage/advise other pubs on how to do the same!   If she'd have drawn me a little diagram to explain, she could've called it a Vonn diagram  (sorry).  Anyway, she's never been up to York so I offered her chance to sleep on my floor, but she politely declined in hope Mr Swan had a spare room.  In echoes of Woking Athletic's brilliant Railway Club, after about ten mins solid nice chat, she told me I shouldn't really be stood at the bar so said farewell and headed into the garden.  The pub looked so nice, if I have one regret this holiday of not staying inside, it was probably here.  But another proper garden under huge awnings allowed Ed Wray (who you may remember from such tales as the Knaphill/Horsell diaries) was meeting me for part 2, hence my taxi ride.  I'd let him down in West Clandon yesterday, and I knew come hell or high water, I had to be here for 16:30 when he passed on his way home from work.  When he arrived, looking a bit exhausted, he explained he'd accidentally gone to a different Sun Inn in a nearby village!  What were the chances of another Sun in these parts?  But never mind, he sat and waited patiently as I finished my pint, and then it was off to rural village too.  Tried to wave in at Vonn, but couldn't quite see her. 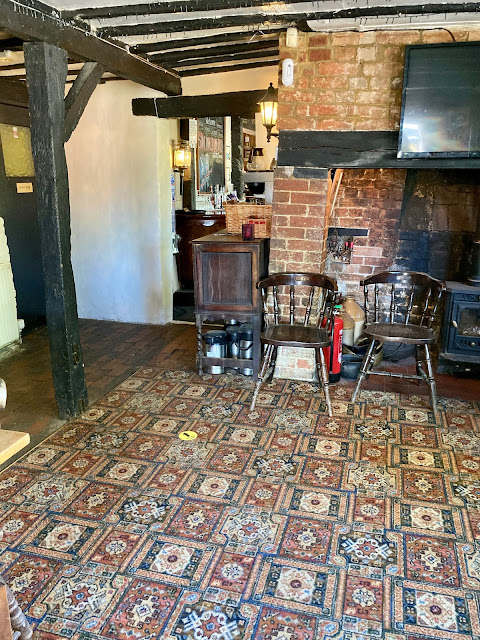 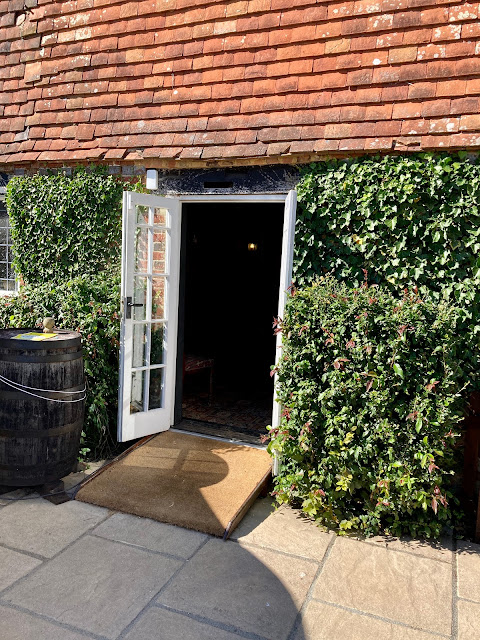 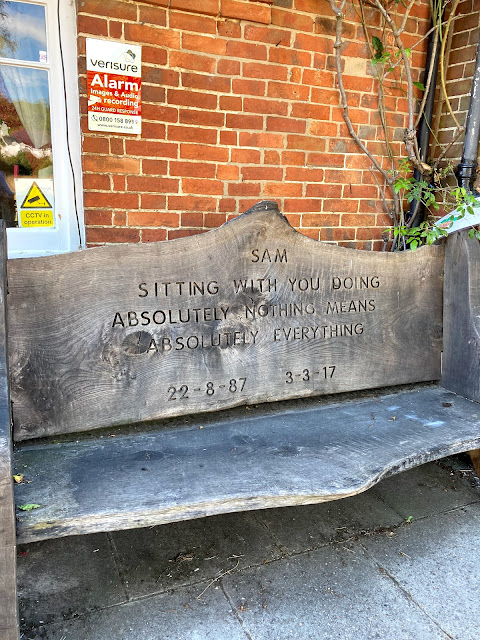 As the Ed-mobile wound its merry little way around tight bends on dark county lanes, I was incredibly grateful for some rare chauffeuring after recent exertions.

Hambledon would've been a real head-scratcher otherwise, the pub standing proud in one of the most picturesque locations of the week and that's saying something with all Surrey Areas of Outstanding Natural Beauty (which you might be surprised to hear didn't cover Woking, Staines or Ashford).

This pub had stood out in my 'pre-Surrey research'.  It had llamas, an owner called de Savary, and their Facebook page just seemed to be a litany of the posh classic cars and weird animals that had paid them a visit!  But no weirder animal than the pub ticking animal.

I felt a bit like a whining Twild after a while, moaning on to Ed how much I wanted to see the llamas, which were obviously being shy as we couldn't find them, and I had to give it up as a bad job.  Merry Harriers, Hambledon (1792 / 3009) was a great deal less weird than their social media would have you believe, pubbier too, almost spartan in its floor space.  It says above not to stand at the bar, but we had to hover 'behind the line', as my delightful Hop Tipple came through, served by young women who I thought looked a bit wary of our arrival.  Twitter believed me when I said it was Kidderminster themed, but I was trying to do a rubbish joke.  The three of us sat outside in the most gravelly outdoor pub area ever, we chatted about life, Ed got his GBG ticking game back on, I found out you could actually do Llama Trekking if you could find them, and yeh that was it, all very pleasant but can't remember much about it. 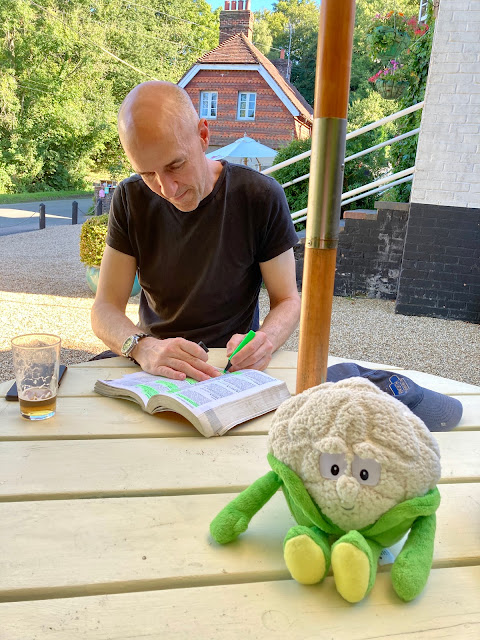 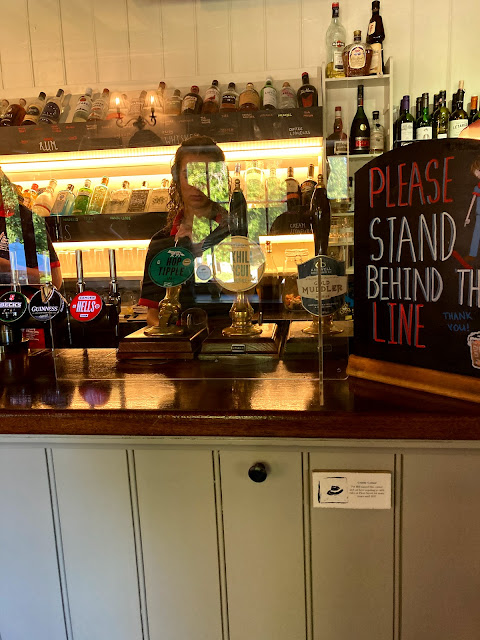 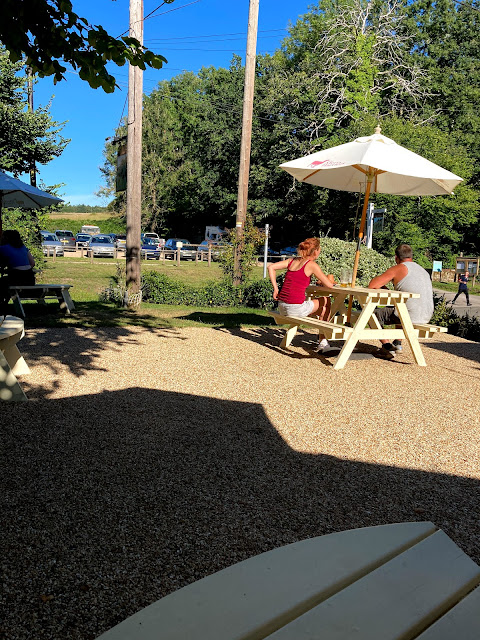 Time for one more then, and I'd just been failing to get to this one despite the closeness and good transport links to Guildford where I was staying.

I'm talking of course about Godalming, and we simply couldn't believe it as me drove right up cobbled streets right to the front of the pub, not another vehicle or soul around.  What a beautiful little place, could the pub match it?  Let's bloody go in and stop messing about shall we, but don't forget to lock Ed's car door manually and wind the window up, none of this automatic bollocks, this is a proper car, let's go!

Amusing, without meaning to be, and quite fabulously old school is probably the best way to sum up Star Inn, Godalming (1793 / 3010).  This was the pub that, when reopening on 4th July, decided they'd just do telephone bookings.  Problem was, two days in, the landlord dropped and broke the phone, and no one could get through!  And now having been, it felt exactly like the kind of pub where that would happen.  The Covid Manifesto was given to us in a clear and friendly way, for once, and with table service, our beers arrived on a mini ironing board, which was a quirky touch to match the general vibe.  The receipt below shows we were served by Tim 9, one of the friendlier pub robots they now have in Surrey.  Dating from the 1830's, you could feel every inch of the history, beer mats dotting the walls and insanely complex arrows to the toilets (which I ended up ignoring cos I'm a rebel) could give you a headache in a lesser pub.  Greene King too, you'd never have known (apart from the Olde Trip maybe). I actually managed to get my first and only pint of stout whilst I was down here. you only have to much Shere Drop and Pride however well drinking it is.  Great way to end the evening, and great to see Ed again, such a nice man. 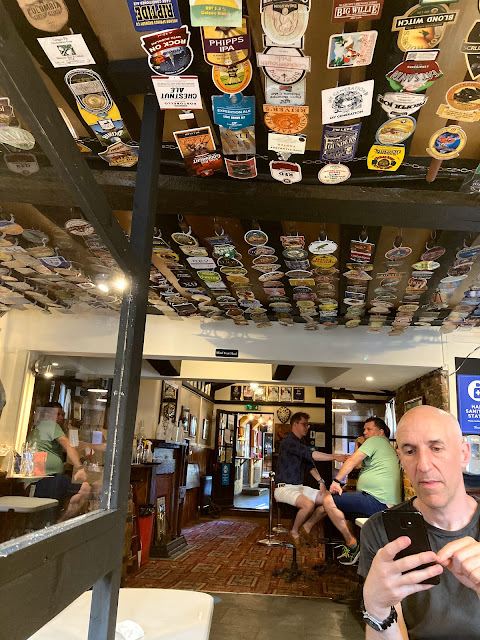 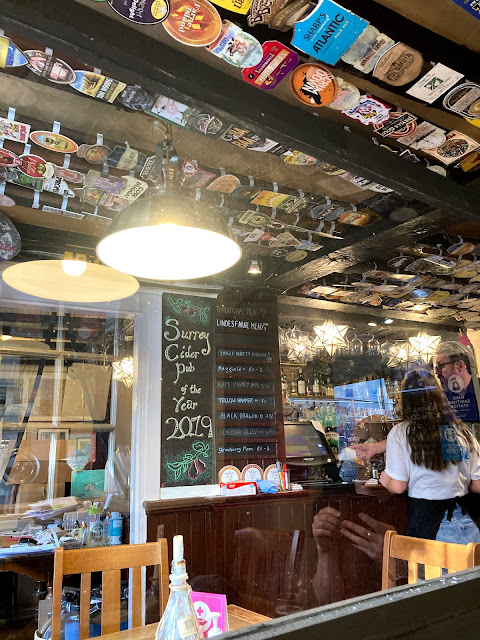 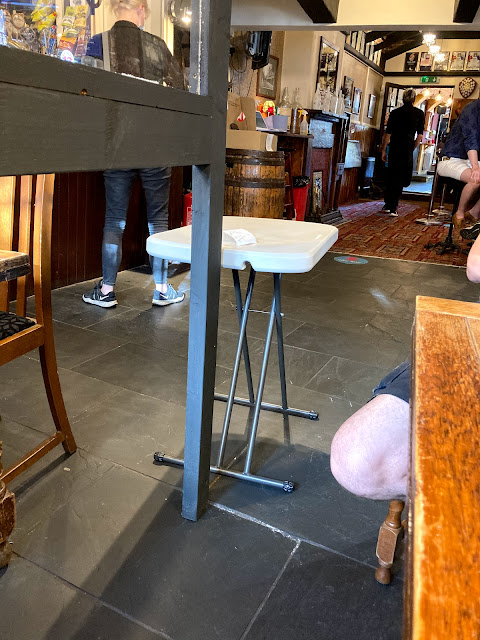 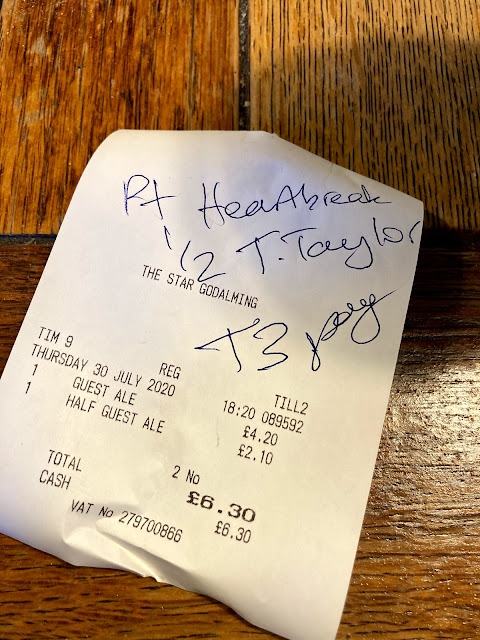 Ed dropped me near my 'go to' Tesco Express so I could get late night snacks before the mile walk back to my Travelodge in fairly decent time.

It was a good job as Friday would prove to be the hardest day of the holiday, and probably the day that finished me!   Join me for tales of that in part 13 & 14.