Halfway through this 'Return to BRAPA' and after three pints, I was already feeling the pace, very much like a footballer who has missed pre-season with injury or had just been on the booze, chips and pies all summer.  But in reverse obviously.
As I dragged my weary corpse through the back streets of East Ham (think Higher Broughton near Manchester with slightly less peril) in search of my fourth pub, I wondered if the maximum six quota was pushing myself a bit too hard.  We'll see.
A third Wetherspoons of the day, flippin' eck, never mind all this Neverspoons stuff, let's get #Everspoons trending!  Here it was, looking all Spoonsie in the sunshine ...... 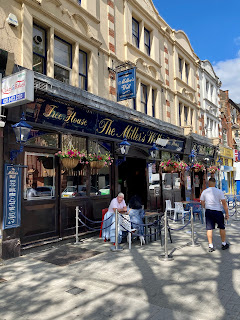 It was a lively intro at Miller's Well, East Ham (1756 / 2973) as I had to queue for the first time in this shall we say, more 'intimate' Spoons layout.  I missed the barmaid calling me, so a woman behind had to breathe in my ear "exsqueeeze me, it's your turn hun" in a very breathy way which made me glad she looked far too respectable and middle class to be carrying coronavirus - I mean, I assume that's how you tell?  I perched on a posing table and was relieved when a hooded, pimpled teen was given a friendly telling off for not santising, blocking the entrance, and then probably apologising too much.  Pubbing at the moment in time is all about not being the customer that everyone stares at.  Talking of staring, Colin the Cauliflower was FINALLY getting some attention when I noticed some of staff peering from beyond the serving hatch and whispering about him, or more likely "Why has that bloke brought a cuddly cauliflower into the pub, the weirdo?" but I tried to block out such thoughts and gave him a reassuring pat.  I read about 'Anne Boleyn's Castle' which I was glad to find wasn't cockney rhyming slang, but the serving hatch drama hadn't finished yet as a bloke was at the "Glass Collection Point" sign, jemmying it with a few tools he'd pulled out of his pocket.  Well, first I thought he was the 'Spoons odd job man', but when the staff reappeared, he quickly downed tools and scurried away to his corner.  Unbelievable you'd try and nick such a thing, or maybe there's a market for them!   I glanced over my shoulder, a bus queue for Stratford was forming, time to dash.


The whole reason for the bus diversion was quite simple.  The line I'd been on terminated today at West Ham.  I don't why, probably Jarrod Bowen's fault.
In such times of crisis, when you can't see a clear way forward, always best to take inspiration from the wisest of lyricists, so I thought of the song 'East End' by Cockney Rejects.  "The 69 bus to Canning Town, it's never ever gonna get us down" and thought, oh yes, I could get a bus instead.  Jolly good.
It wasn't the 69 or Canning Town, but the 238 to Stratford, which sounds less 'romantic' but at least I could get to London Bridge from there, where I had an almighty scramble to find the public loos, then missed a connecting train to Brockley cos I somehow banged my knee.
Only one thing for it, a walk through London Bridge area to see if either of the two GBG pubs here were 'available'.
The first was found in the smuggiest of smug London backstreet areas looking like this .......
Tired, aching and with discipline seriously lacking by now, I saw an open back door staggered into the centre of the room and gargled aimlessly, pointing towards the bar area, it's what Pete Doherty would've wanted if he was still with us today.  Welcome to The Libertine (1757 / 2974) , a friendly lady told me they were fully booked and no room at the inn!  I  put on my pleading eyes and wailed that I only want a drink and would only be half an hour most, and she must've taken pity on me for she told me there was one free bench outside at the front.  As I sat down, the sun came out, and she followed with a pint of murkiest murk and a card reader.  I gave it a swipe, and then a band started up in the garden in front of the block of flats opposite.  All the residents came out onto their balconies, clapping along.  Passing cyclists stopped directly outside the pub forming a curious throng, and I thought it was going to be one of those BRAPA 'perfect moments' (trademark Martine McCutcheon) until I tried the ale and realised it was seriously tired, and then the band pulled out the pan pipes and did the worst La Bamba cover ever, and the moment of magic was gone.  A bloke stood next to me squinted in an appalled manner, but he was wearing a 'Spits' shirt so probably not his style either.  Colin was just about to join me on the bench when a Spanish smoker sat down in HIS place, and started talking loudly in Spanish to her friends through the open window behind us.  This pub was ultimately a case of promised much, delivered little , but full marks to the lady who let me stay to get my tick! 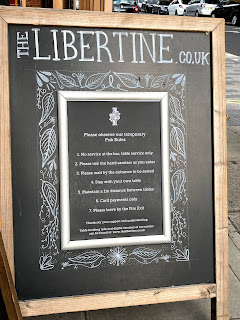 I necked my beer and realised if I got a wriggle on, I could get my sixth and final pub in (IF open and letting people just walk in, it'd been hard to tell online for this one).
As I approached, I was encouraged by the sight of people lining each side of the streets merrily drinking away, and with the evening sun glimmering off the building, a very attractive looking pub which let's be fair, we haven't said too often today. 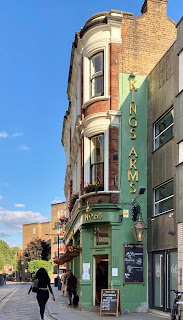 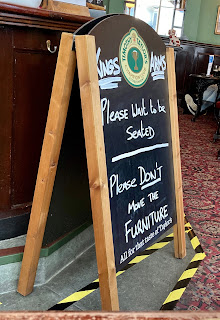 ..... so I mooched about in the entrance way when the staff started beckoning me up to the bar in a sort of "don't be shy, enter our lair" kind of way, which just shows, you can't even trust the word of a blackboard from Keighley.  Did that mean they wanted me to start chucking tables around too?  It was hard to say.  I'll be glad when this 'new normal' is a mere artefact of the briefest pubby history.  This barman has a proper swagger, very engaging, another first for the day.  I went for the Harvey's (I'd normally go Landlord but was silently protesting against the lying blackboard) and he starts rabbiting on like a Chas n Dave song about how £4.70 a pint is cheap for SE1 and how I shouldn't complain (which i had no intention of doing!)   Then, when I go to swipe my contactless card, he tells me £5 minimum!  Classic.  I nearly suggest raising their price to £5 a pint but decide against it, and end up conducting my first cash transaction since March.  I got a 20p and a 10p change, and I stare at them for hours like a pirate with his treasure.  Coins!  Wow. I ask him if it is okay to sit inside, having realised what a perfectly formed small one room classic this is, and unlike a normal July Saturday evening in London, there is actually space to breathe and relax.  Swings n roundabouts you see.  As Colin and I soak up the atmosphere (I'd definitely got a second wind by now), I reflect how many beautiful pubs like this there are scattered around inner London, most of which I haven't been able to enjoy simple due to the high volume of people on my visit (generally a similar time on a Saturday).  So I really enjoyed this experience.  Colin simply got nodded at like he was a fellow customer, he looked like a lot of them.  Twitter seemed more interested in my pint of Harvey's than the fact I was in beautiful pub, I guess beer is more interesting than pubs to most people, I can't understand it myself!  Was a great drop here though.  Never been a fan of theirs til I had a glorious pint of their Old Ale in a pub called near here (Royal Oak I think?) a couple of years back.  So I wonder if Harvey's is one of those things that come to you a bit later in life, a bit like coriander, ABBA, or death? 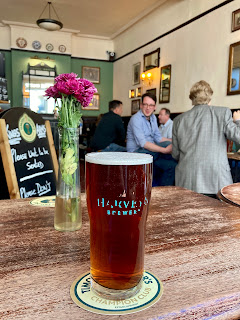 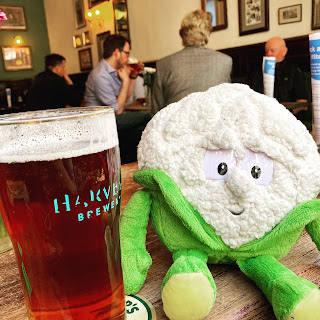 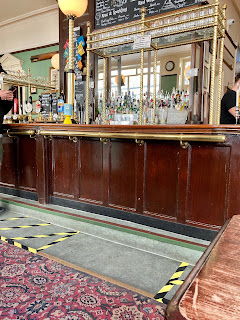 Bit of late drama as I thought using Borough station would make more sense than London Bridge being closer, only to find it totally shut!  After a brief panic, I still got back to King's Cross in plenty of time, drank loads of water, ate loads of food, and travelled back in total peace, though with the facemask on, it was a bit like a 'greatest hits' compilation of all six ales I'd drunk earlier, and it wasn't that great!
I had the best night's sleep I'd had since lockdown began, and woke up with that sense of achievement you can only get from a six pub tick day!
Until next time, and it might be a couple of weeks because friends and family are suggesting they are more important than BRAPA, goodbye for now.
Si
Posted by Si 'BRAPA' Everitt at 9:54 pm