There had never been a better a time to tackle the Good Beer Guide pubs of Surrey!
In desperate need of a total BRAPA blowout following the agonising pub closure brought about by Lockdown, I'd worked for three months solid, and with encouragement brought about by the success of my earlier July trips to York (4th), London (11th) and Hull (18th), I now had some grasp on what was expected of me as a pubby patron in this not so normal world.
I chose Surrey because I was looking for a place where I could really spread my wings, and only two previous trips in my life (Egham & Englesfield Green in 2014, Claygate, Esher & Weybridge in 2017) meant the county was something of a 'blank canvas' to me.
Additionally, unlike, let's say Kent, it isn't a 'micropub heavy' county, and the vast indoor & outdoor spaces of old country dining pubs should work in my favour for once.  Less limiting.  Generous hours, easier to get in.  Not to mention better transport links than many counties (the south east is noticeably so much better than the rest of England).  My excitement levels for a BRAPA holiday had never been higher.
Similarly, my planning had never been more meticulous as I cross referenced opening times and the 'new rules' (which differed from pub to pub) across Whatpub, Facebook, Twitter and pub websites, whilst also working out which bus and train routes would work best, or would a long walk actually be more viable than public transport?  Could I 'treat' myself to the odd taxi?
And this was all against a backdrop of people telling me what an unfulfilling county Surrey was in terms of pubs in comparison to other areas of the UK.   The novelty factor of simply 'being back in a pub' was still strong with me, so if this was indeed the case and the pubs were dull, perhaps I wouldn't mind too much.  No longer was I taking the Great British pub for granted.  A tick is a tick is a tick, after all!  Alas, I'd prove to be wowed on a daily basis by the quality on offer.
Here was the typical scenario.
Pub Twitter : "Ooooh Si, Surrey eh?  Haha, good luck with that.  Poor county for pubs!"
Me : *Checks in at a random Surrey pub on Twitter, expressing surprise how great it is*
PT : "Oh, well obviously when I said Surrey was rubbish, I didn't mean THAT pub.  THAT one is a classic, EVERYONE knows that!"
Soon, I was aboard the Kings Cross train with the first of five funky new facemasks to try out (people used to buy a new swimming cozzie before a holiday, welcome to 2020) ...... 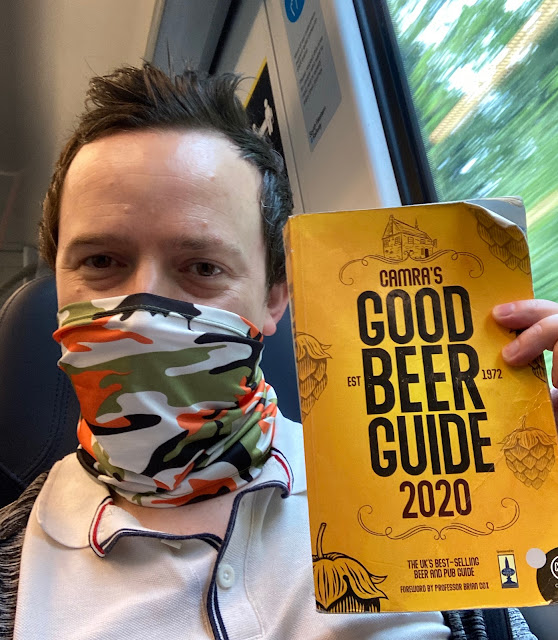 I made it to Guildford not long after 10am, which I hadn't been expecting, but I was well aware that a GBG Wetherspoons was just around the corner ......... 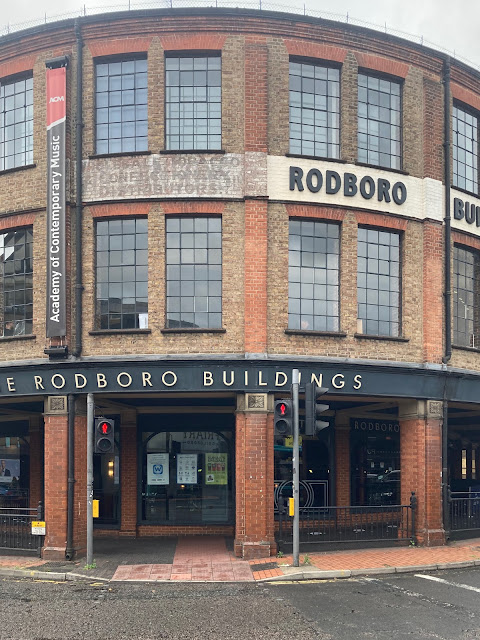 All legendary idiot pub crawls start in 'Spoons, so it was fitting that this should be first of 51 (FIFTY ONE) pub ticks in nine days, Rodboro Buildings, Guildford (1759 / 2976).  Google it and the first thing that comes up is 'Guildford Wetherspoons Stabbing' which doesn't bode well, but as I sanitised my hands with a theatrical rub so the barman knew I was clean and set my smile to 'totally at ease', there was nothing TOO threatening in the air.  I ordered some obscure shite from Berkshire which at £1.49 with a Curmudgeonly 50p off voucher, was a lovely crisp cool way to start my longest drinking session ever.  This was a Lloyds 'Spoons which from what I can gather, usually means they are multi-floored (rather than the usual multi-flawed, haha, am joking, love 'Spoons) and sometimes have a bit more of a party atmosphere on weekend evenings, though I hear this has recently been cancelled here!  The circular building shape, spiral staircases, and floor compasses gave for an almost masonic effect, enhanced as I sat in the lower ground area and a few stoic oldsters stared at me with a suspicion which only reminded me I was a stranger in these parts.  Locals shoppers circle the building and peer down at you through huge glass windows like shit vultures, which either totally invades your privacy or helps you to feel part of the shopping hustle and bustle depending on your viewpoint.  Two men laughed in a croaky wheeze which screamed 'make the track & trace form mandatory, please!', I read a bit of the 'Spoons mag, and then realised I'd finished my pint and it was still only 11am. 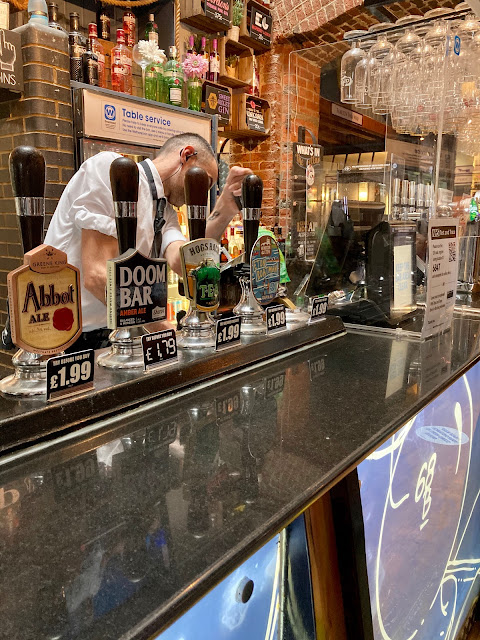 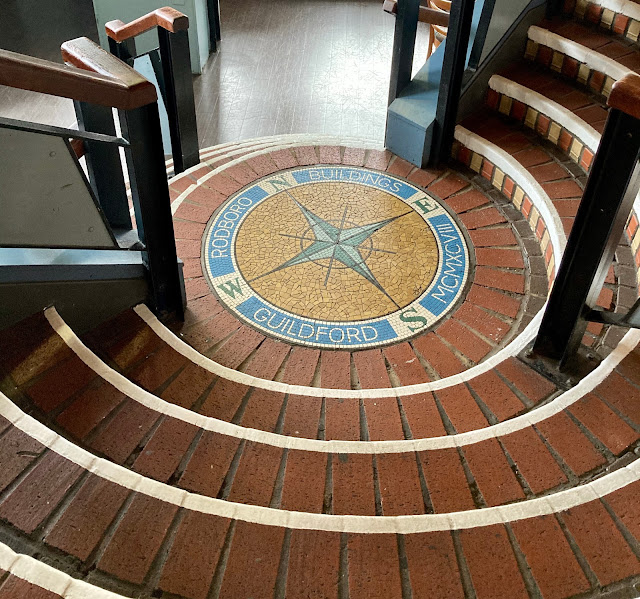 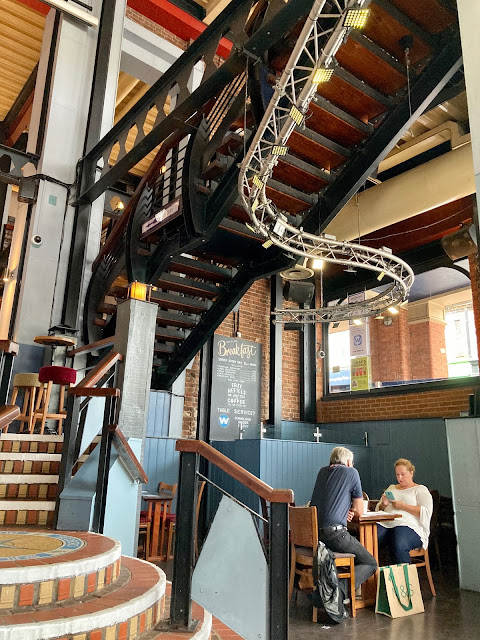 I couldn't check into my digs til noon, so I was fortuitous to have an 11am opener on the agenda.  This took me a bit off centre, to the leafier Stoke Road area of town, an early glimpse that Guildford is actually a pleasant town once you step a few paces off the main drag whilst the scroats are still in bed cradling their crackpipes and vintage copies of Readers Wives.
Not that you can ever rely on any non Spoons pub being open prior to noon these days, but thankfully, I was in luck ........ 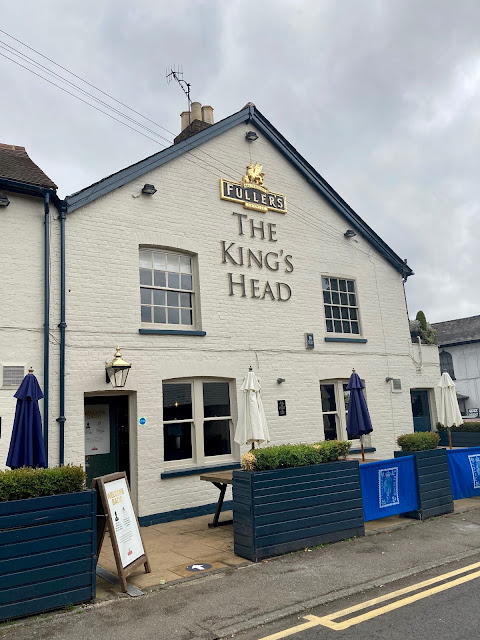 King's Head, Guildford (1760 / 2977) had only reopened its doors to the public a couple of days previous, reflecting what I'm noticing with Fullers is one of the most staggered approaches (laissez-faire?) to the reopening of pubs I've witnessed yet.  Cricketers in Dorking remained shut the entire time I was down here!  A welcoming gent on a makeshift reception desk greeted me from behind his laptop, and we got the formalities done and he was very attentive, putting me onto a 'high table' because I wasn't discerning enough to say otherwise.  I had a real hankering for a pint of ESB (I MUST have been in the party spirit!) but he tells me they are only brewing Pride and Hophead at the moment cos ESB is a bit 'specialist' - try telling that to the post-football crowd in Parcel Yard at 6pm on a Saturday evening.  Still, it got us chatting.  Now, I KNOW they were only going for the personal touch, but having given my name as part of track n trace, they kept using it!  Like "How are you enjoying your pint Simon?"  "You ready to pay Simon?"  "No don't wee on the floor Simon".  All was a bit TOO MUCH, if you know what I mean.  I made the last one up by the way.  As Fullers pubs go, this was a nice example.  Dark woods, shining mirrors, clean and professional.  Perhaps a tad spartan and clinical as space was cleared for social distancing,  but I think even at 11am as only customer, it was an old enough building to get away with it.  Lively barmaid pops up.  Her first day back obviously.  So many rules to take her through, I felt sorry for her as she received all this on the spot training.  "I'm an actress and I'm used to learning lines, but I can't remember all of this!" she wailed.  Having been forced to set up a tab (which would become one of my pet hates of the week), I eventually made eye contact to get my bill after 10 mins of trying, and she was introduced to me (first name terms of course!) as I was her guinea pig in the latest bit of training.  Nice effort though, good staff really do make such a difference. 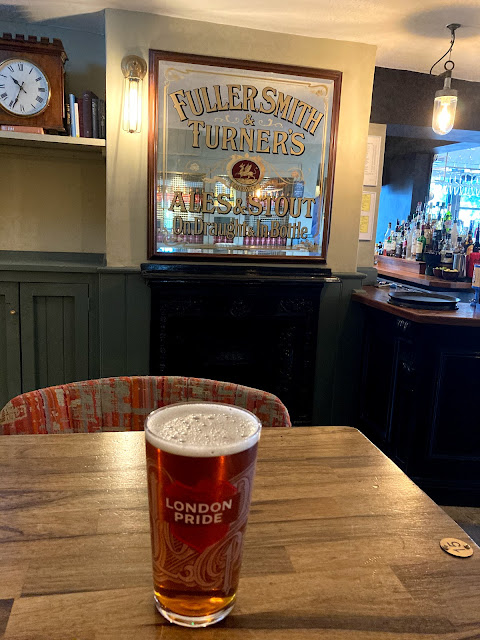 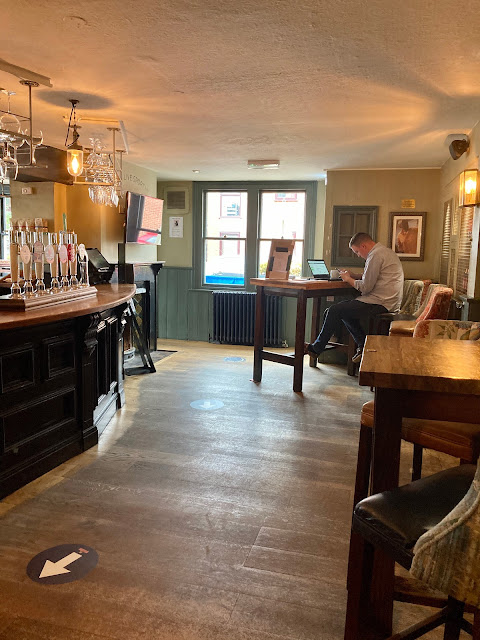 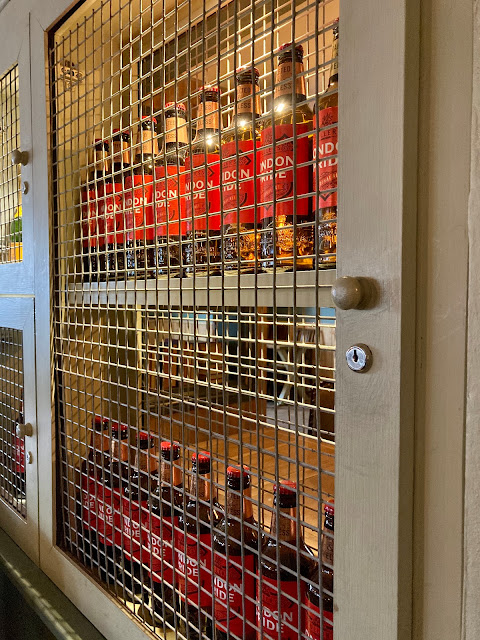 Time to check in at my Travelodge, got to see more of Guildford's potential with the cricket pitch and beautiful path along the River Wey, if you can ignore whatever work was going on all week. 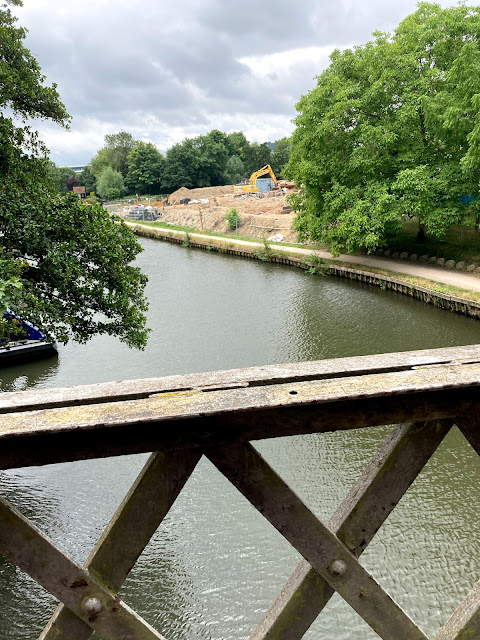 After a spot of lunch, I got the BRAPA bag sorted out and it was back off into town to find the bus station and get out to some rural spots, the first of which I'll tell you about now before we end part one as I have rambled on as usual.
Bus route 53/63 took me down to Cranleigh, and it felt a bit like now or never with this pub tick, what with the midweek hours severely restrictive and Sunday bus services notoriously dodge-city.
Problem was, they'd said online that this would be an 'outdoor only' affair, and if the weather was bad, they'd simply not bother opening!  So of course, halfway into the journey, fully committed, the heavens opened for the first time today.  Anxious as I stepped off the bus in this 'hugest village / smallest town' in the country, some canvas awnings gave me hope, and then I was relieved to see a group drinking at the front.  Game on! 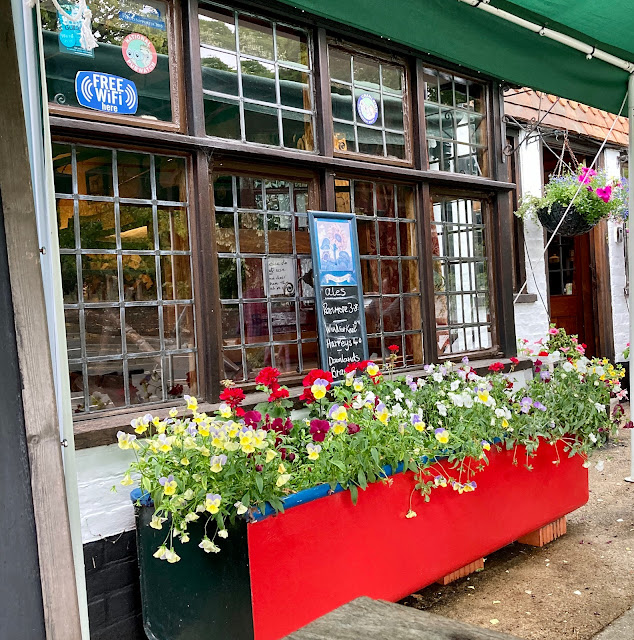 So what next?  That was the big question at Three Horseshoes, Cranleigh (1761 / 2978) as I couldn't just keep hovering by the entrance and pray for a staff member to appear, surely?  I felt silly.  And this was before Colin decided it was time for his 'moment in the rain' putting a plant pot on his head and generally embarrassing me in front of the serious locals, who by the way, were not about to try and help me out in any way.  Finally a barmaid appeared but told me (a) she was serving someone else and (b) I first needed to read the list of rules, unhelpfully sellotaped horizontally to the edge of the table which meant you had to either turn your neck at a crazy angle or stand with your body in the rain!  I had to text my name and table number "F5" to this number, and when departing, I had to send a further text message to say I was leaving.  Elaborate!  I finally got a well kept pint of Ranmore from Surrey Hills, which felt like it could get watered down if the canvas didn't hold as the wind was whipping up a bit of  a storm now.  I remarked about how glad I was to find them open to despite the rain, and she reacted like there was absolutely no chance they wouldn't be!  I went to the loo so I could at least say I'd been inside the pub, but other than that, not a great deal happened.  Time to stand in the rain and wait the bus to take me back up the road to Wonersh and Bramley. 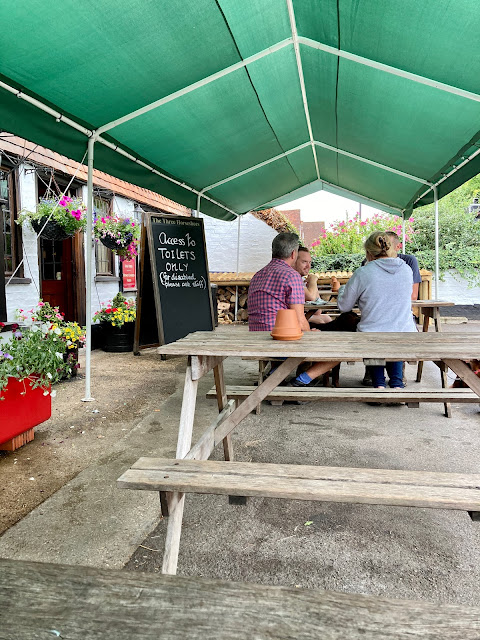 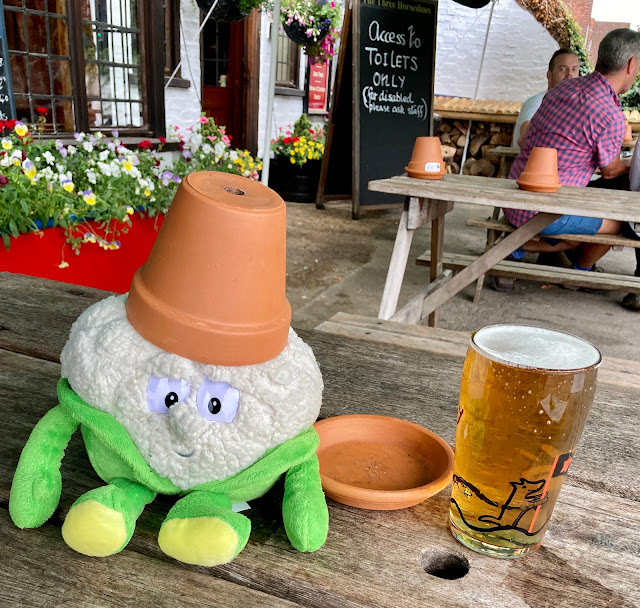 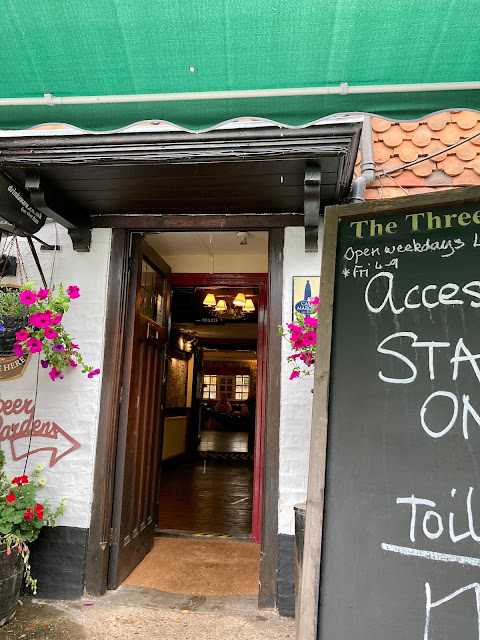 Would the bus turn up?  Could the other two village pubs better this one?  And could I get a cheeky sixth tick in before it got too late?   Find out tomorrow in part two.
Thanks, Si
Posted by Si 'BRAPA' Everitt at 9:29 pm