Tuesday dawned nice and sunny, and after the relatively townified Monday of Ashford, Woking and the like, I was in the mood for some fresh country air, Surrey's AONB and all that jazz as a sort of tonic.  Even Guildford looked pretty as I took a leisurely stroll by the river. 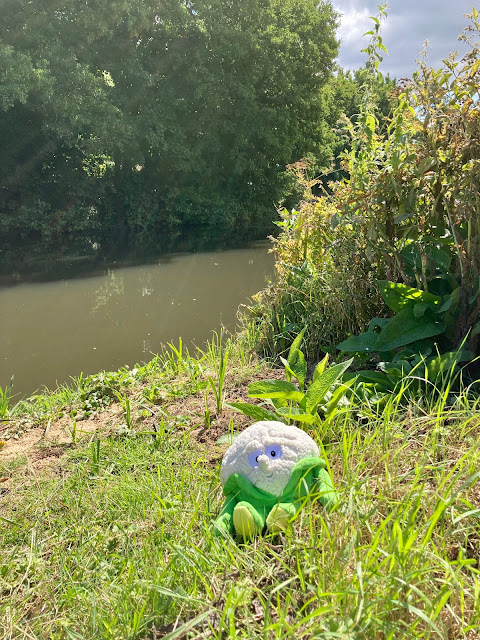 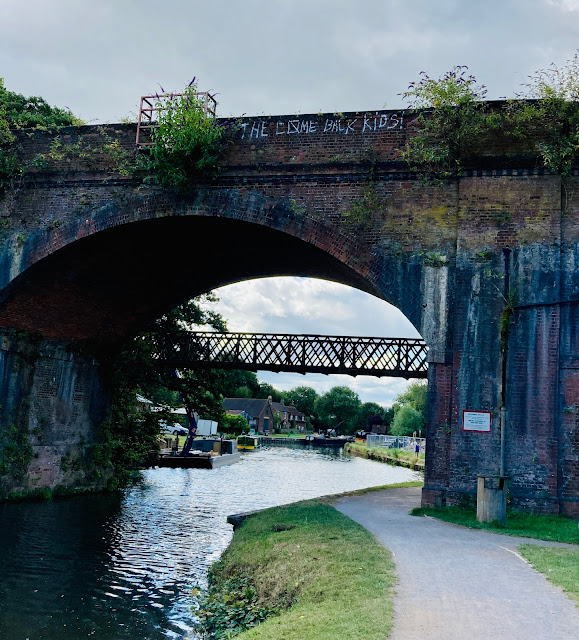 A helpful train line took me east of Guildford, and even more helpfully were GBG entries dotted along the route.  First up was Horsley, from where a pleasant 20 minute stroll along the railway line through  woodland led you to the snoozy village of West Horsley, where a 12 noon opener was imminent.

I was early, and a couple of villagers looked at me in that curious middle England way, so I tried not to look too suspicious and went to chat to the local sheep for ten minutes who wanted letting out, but I told them I'd set Colin the Cauliflower mascot on them if they misbehaved. 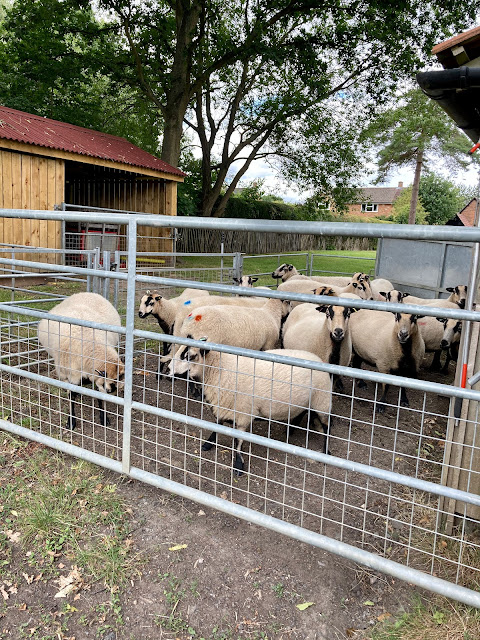 Aware that I couldn't be trusted in their village before doing something potentially silly, the pub relented and opened the front doors at 12:01, much to my relief, as I'd almost got lost in a broom cupboard around the back a couple of minutes before. 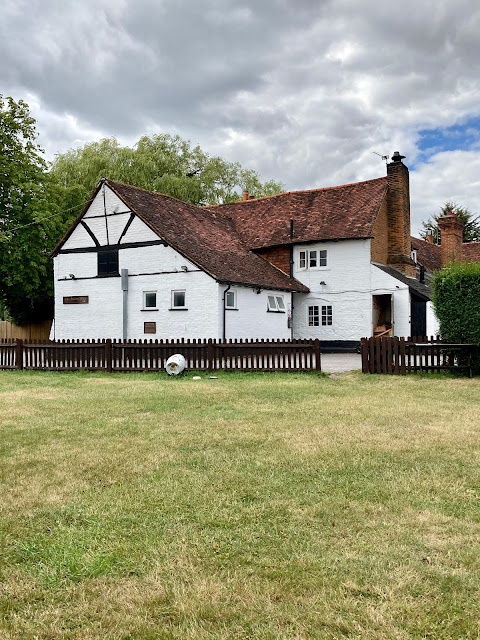 I saw a Turkish looking name above the door, and walked into a dark traditional farmhouse style bar area and saw two thickset men looking warily at me, who may or may have not been of Turkish origin.  A sleeping dog was quite chunky too, must be the Horsley air.   All I was bothered about was getting a pint of course, here at the Barley Mow, West Horsley (1778 / 2995) , relief too for the men who told me they definitely weren't doing food even though I'd never asked.  After a cheeky track n trace, they did that classic Surrey thing of asking you where you want to sit but using mind control to make you go outside.  It didn't matter to me, as traditional as this pub seemed, I assume it opened up into something more dining-based the more you investigate.  As the only customer for my entire time here, outside felt right.  There was also a very impressive long malting house behind the pub, and the garden was flippin' massive and I sat dead centre.  The odd car trundled through, but with the sun back out, all you could hear was a distant lawnmower and the odd buzzing of an insect.  This was the blissful life!  And the ale, Shere Drop from Surrey Hills, a beer I'd see a lot this week, was the best quality example of the best beer I had all week.  Or maybe this was just the novelty of being the first! 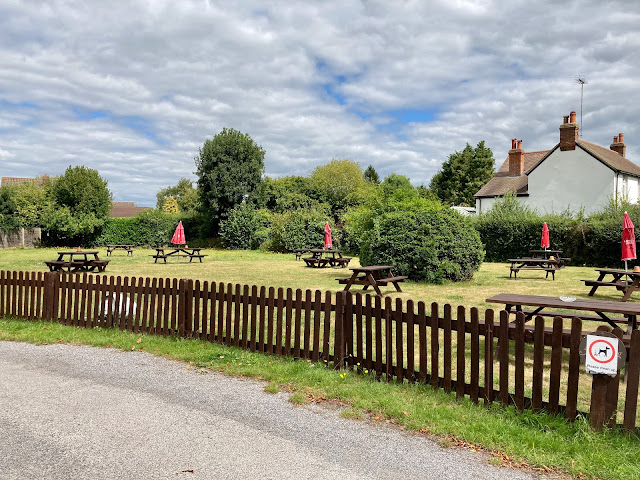 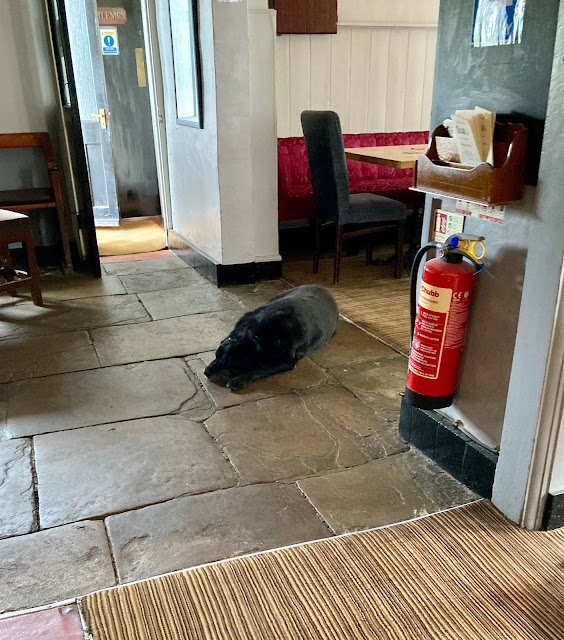 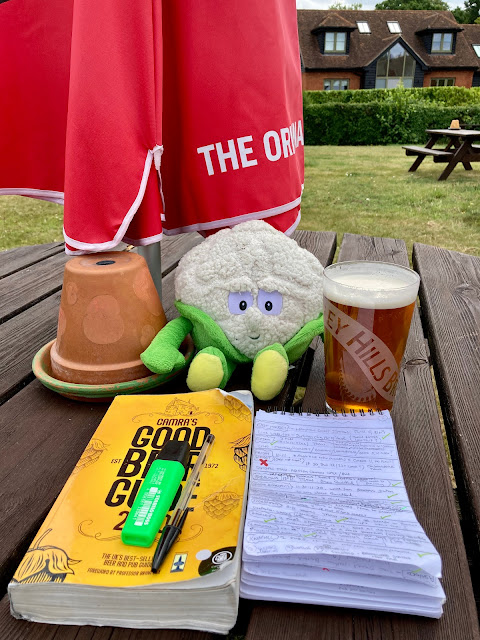 A stop or two up the line was my second of just five pubs today (I'd done seven yesterday so it didn't bother me) and the easiest railway station to pub walk was here at Cobham & Stoke D'Abernon.

Even by Surrey's high standards, this seemed particularly posh as I crossed the threshold at pub two, suddenly wishing I'd worn a clean white pressed shirt, brushed my air and put on a bit of aftershave. 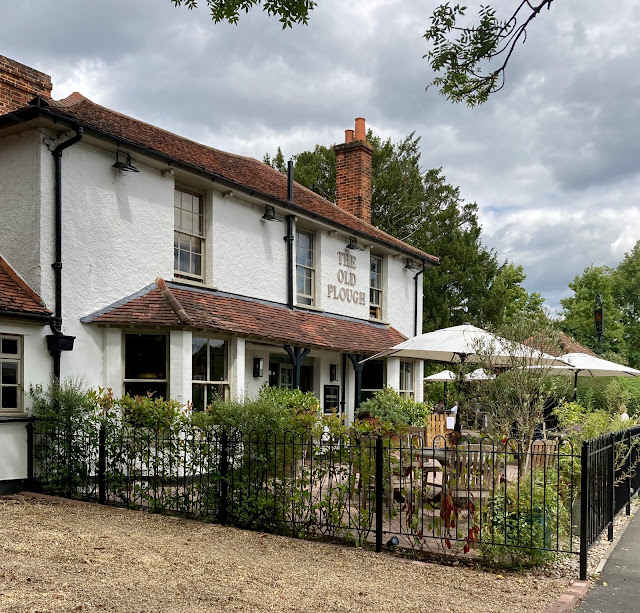 The landlady greeted me impressively at the Old Plough, Stoke D'Abernon (1779 / 2996).  However out of place I felt with my Shere Drop, Cauliflower mascot and smuggled bag of Spicy Tomato Snaps (I used to have them in my packed lunch in Saffron Walden circa 1984-1990 - crisps that have stood the test of time), she and her army of statuesque waitresses smiled, checked I was ok, and generally made me feel more welcome than 99% of UK pubs of this ilk would.  Two gents behind me had the kind of pub chats you just don't get in Doncaster, my favourite of which was a discussion on the potential pitfalls of marrying your mistress.  "I guess she stops becoming a mistress at this point".  You couldn't fault the logic.  This pub was notable for being the only one all week which had hand sanitiser on EVERY table.  Top effort.  The entrance / exit system regarding the direction to and from the toilets took my brain some adapting to, but that was as challenging as it got on the pub front ...... 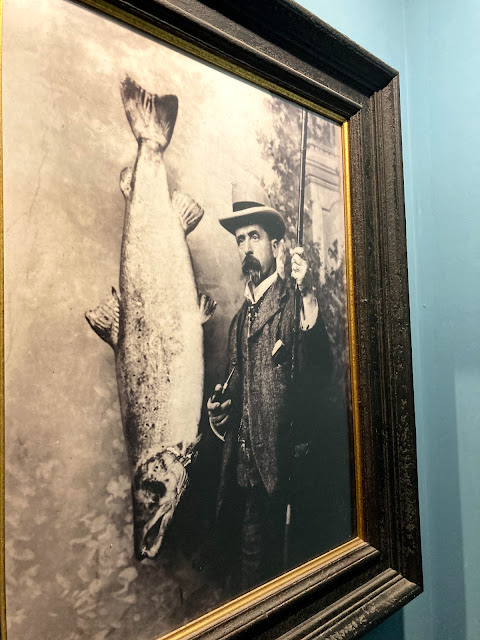 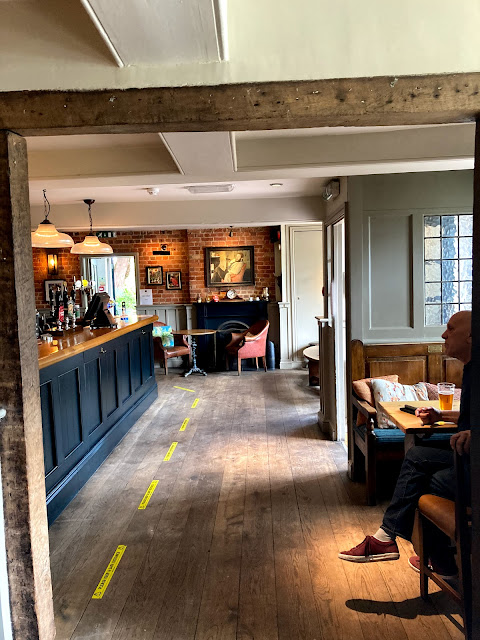 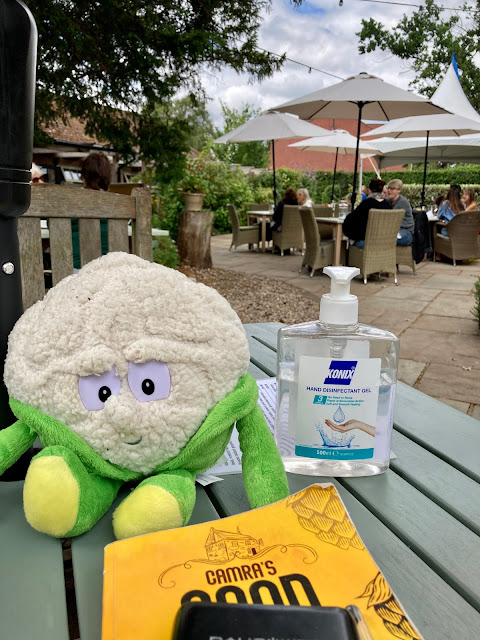 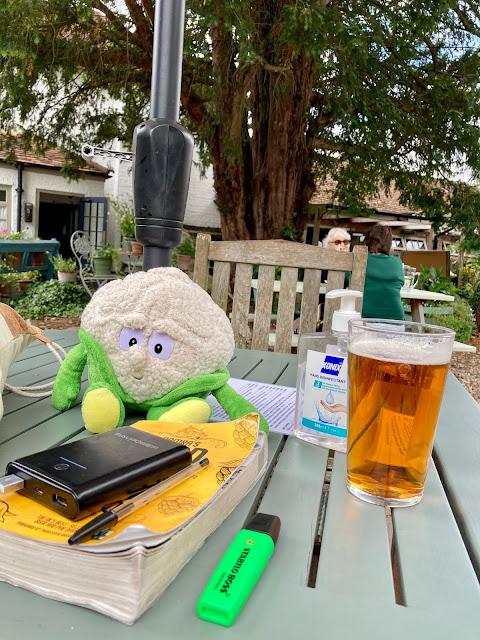 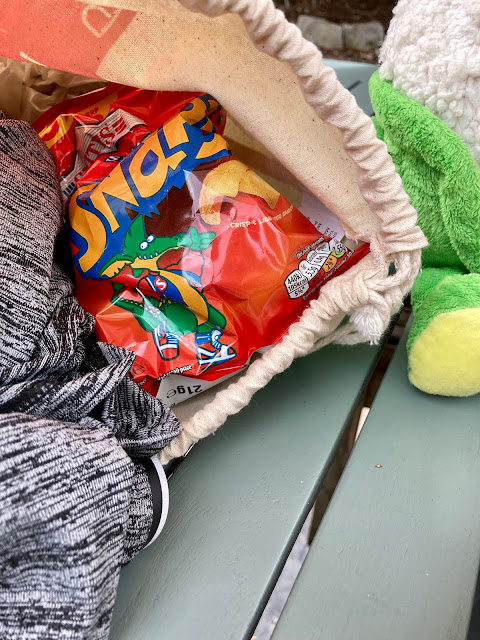 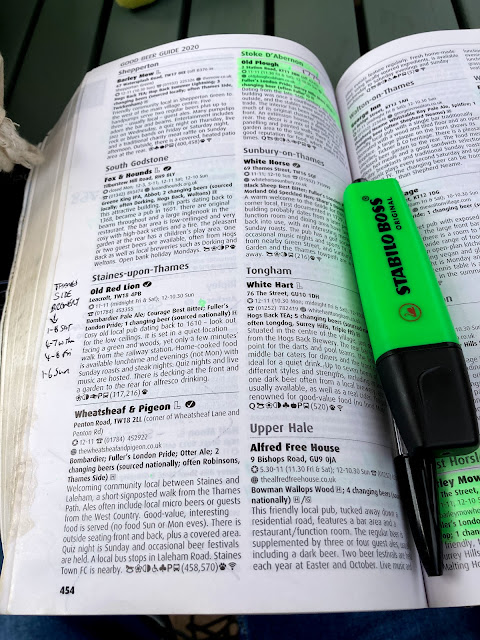 ..... my main headache concerned the increasingly difficult logistics of the day.  I'd planned to meet Ed at West Clandon about 16:30 which didn't look too difficult on paper, but with my next pub on a slightly different branch line, I was struggling already!

Every train today just wasn't timed in my favour, and I thought perhaps I could speed things up by walking to my next pub in Great Bookham from Stoke D'Abernon.  It all started well, I even passed the Chelsea training ground where three teenage lads were screaming and waving at the sports cars driving off.  I scowled at a Chelsea player as the lads had made me step onto the busy road, but not sure who he was.  But when I reached a garden centre, the pavement ran out and it was such a crazy A-road lacking a path, I had to give up and just sit and wait at Cobham station.  That meant changing at the aptly named Effingham Junction where timings again meant a huge wait!  I was getting frustrated.

And all this without any travel disruption!  All I could do was apologise to Ed and say I'd meet him later in the week.  Finally at Great Bookham, and it was still a good stretch and I was feeling knackered and pissed off by now.  Life of a pub ticker eh?

However, I had to smile when when I reached the pub and the blackboard said they'd only opened at 4pm!  How fortuitous this turn of events was?  I could have so easily chosen to come here much earlier in the day, and been stranded.  Funny how things turn out eh? 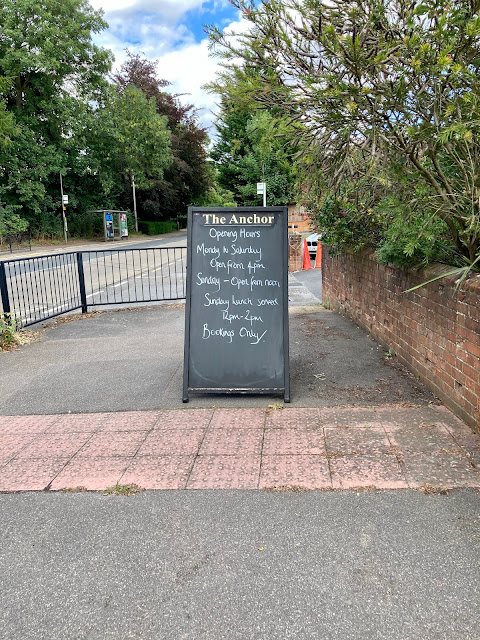 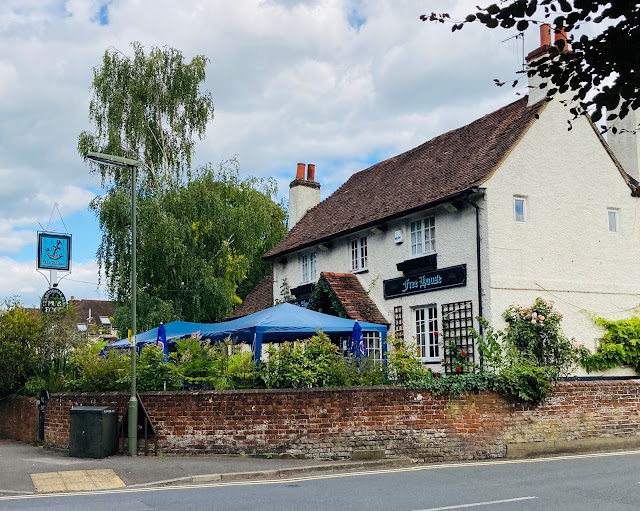 A gaggle of jolly, rowdy old locals were laughing and smoking out the front of the Anchor, Great Bookham (1780 / 2997), one of whom turned out to be the landlady and she followed me in to the empty but refreshingly cool indoors and served me a pint of something strange tasting from a place called Tillingbourne. Despite the 4pm revelation, I realised my mood was very 'low' and I was close to unresponsive as she serves me and asks where I want to sit.  It is a bit out of character for me, but I couldn't snap out of it.  I felt like that priest in Father Ted who comes to stay with them but just sits there and doesn't say anything.  The landlady popped in twice later on to check if I was ok and enjoying my pint, and I'm ashamed to say all I could do was grunt and try and force a smile and nod.  I felt like I'd been temporarily bodysnatched!  £5.05 for the pint perhaps had a bearing, easily the most I paid all week!  How could they justify that here?  Pint was good quality, but not to my taste. Bookham was no posher than anywhere else, if anything, it was significantly more 'pubby' than many of the hostelries I visited this week.  A real aberration! Pub had character and atmosphere, even with no customers in.  Even with the state I was in, I could sense that.  For a place called 'Bookham', you wouldn't think the bookcase would be off limits but that's Covid for ya, rumours it had been shipped in from Preston that morning have not yet been confirmed.  Even the bogs went for some bookcase style decor! 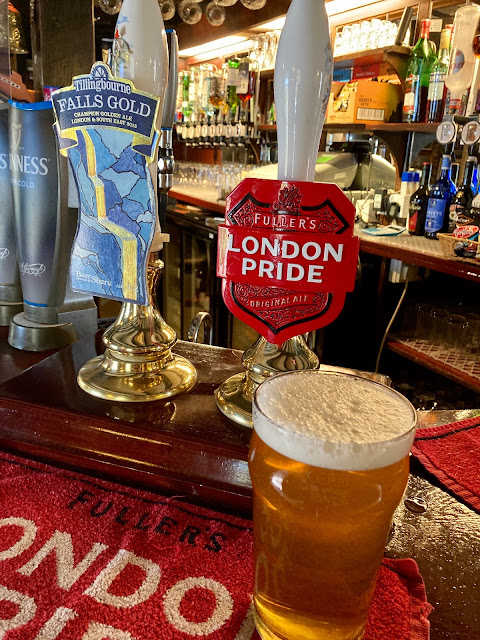 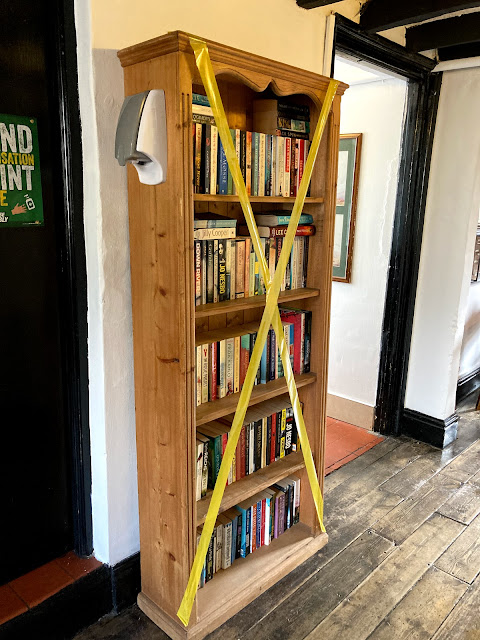 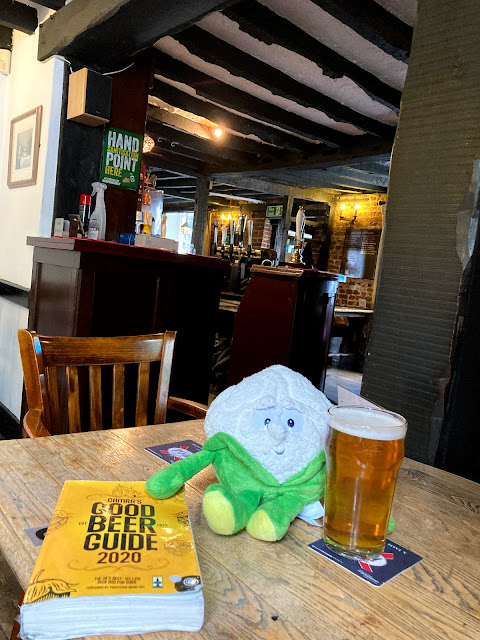 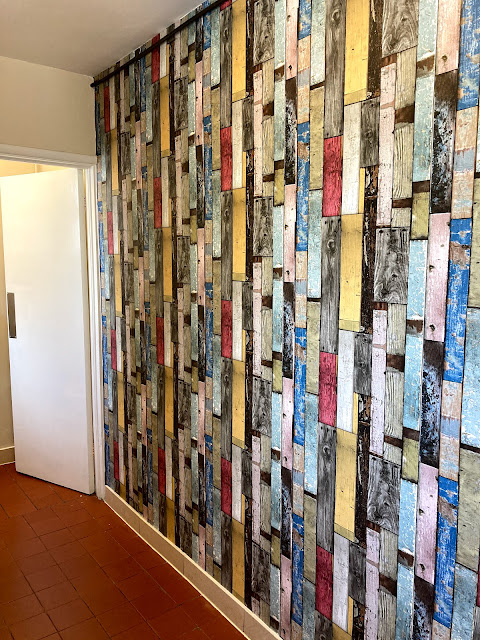 Things were about to turn the corner though for my final two pubs, I'm happy to say.  Join me in part 8 tomorrow, we can do this!