BRAPA - Anything Elsecar to Add?

Elsecar.  One of those places in the U.K.with a special place in my black BRAPA heart.  It's only a small town.  You turn out of the station, you walk down the hill, there are four cracking real ale pubs (the Fitzwilliam Arms, the Crown Inn, the Market Hotel, Milton Arms), and then, this interesting Heritage Centre right at the bottom.  My Grandad was born in Elsecar, 5th April 1912, 102 years to the day before BRAPA's official start date!

Even on the dark squally wintry night we had on Friday, you only have to glance up at locals waiting at the bus stop, smoking outside a pub, or jogging uphill with a cross-eyed whippet, and they will return your glance, say "ow do" or "alreet mate".  Truly one of the friendliest places I've been to.

Who'd have thought they needed a FIFTH pub (well shop / real ale bar) to put in the GBG, located inside the Heritage Centre, and I didn't even have to climb over a fence to get in or pick a lock which is so often the fear in such situations. 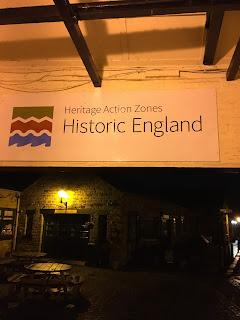 It was lurking in 'Unit 15' towards the back of the outdoor centre.  I could only be sure it was the right place because (a) it was about the only place with a light on, and (b) I could vaguely see the red GBG sticker in the window. 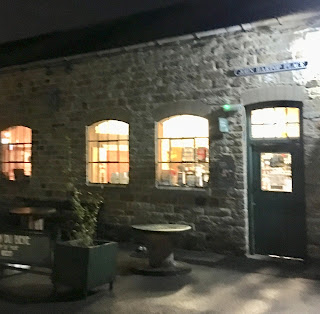 Regular readers will know by now that the beer I drink isn't as important to me as the pub itself, but let's be honest, I always strive to get a good pint of real ale in each place I visit.  After all, I am following a book with this as the central concept!  But more importantly, I just prefer the taste and lack of fizz in good ole' cask bitter, and if that makes me some kind of fat bearded dinosaur bore, then guilty as charged.  I say this because having negotiated the beer shop, I was pleased to find two cosy rooms (my one felt a bit like a sauna) for the drinkers, putting it above other 'beer shops' that have been in the GBG like Ossett's Bier Huis for example which feels 75% shop, 25% drinking establishment.  But I'm confused to see 10 taps.  "Which of these are real ale?" I asked.  The barmaid had no clue, but the guv'nor Nige, a classic stoical wry chap in the Mick McCarthy mould, finishes digesting his pork pie before telling me he's just back from holiday so they should be signs on the beers and three of them are key-keg, but he favours keg now so the other 7 are keg!  Fair do's, I apologise for no reason, he sticks some labels on, and he showed me this little cupboard with barrels and pipes, reeled off a few names, so I panicked and remembered one name, Pescatarian IPA (except it wasn't called that).  Little did I know it was 6.5% and £5.20 a pint!  Ooops, oh well, it was good heart warming stuff and didn't taste of fish.  The locals predictably nodded and said 'ow do lad' but all the entertainment were on the visiting dogs (I counted a twog-shattering SIX dogs by the time I'd left, never seen so much arse sniffing in one establishment since that Tuesday night in Oldham 'Spoons)  "This one's a reet tart!" said one.  "Did you see her twerking?"  So glad that my view was obscured, no one wants a dog in the Miley Cyrus mould, not even in Elsecar.

I was impressed on the whole.  Okay, so it might not showcase Elsecar in the same way the four PUBS would, but friendly with a good feel to it, I was expecting something a lot more chilly and boring.

I climbed back up the hill, nodding at the four pubs like they were old friends, past the railway station (the next train was 55 mins away) and hot footed it the ten or so minutes until Elsecar becomes Hoyland.

I mention my Grandad earlier, well my other one ('Grandpa' as my Grandma insisted he should be called) had the middle name 'Hoyland' after this very place!  AND he made a guest appearance for Rotherham Utd in the Second World War, and you don't get better than that!

Unsurprisingly (for I've 'finished' South Yorkshire twice before), a large number of those new pubs I have to mop up are 'micros' with 'limited hours' (hissssssss) and it was no surprise I walked straight past the small front and had to turn back after getting lost in a car park behind it. 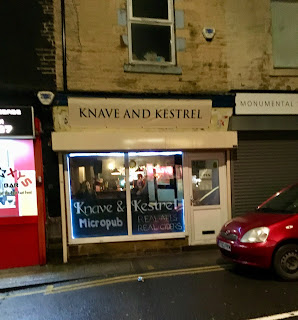 There was no a lot of space in the tiny front bar, so a good job the friendliness extended into Hoyland. The bar was a bit too high for my liking, so I stood on my tip toes between some proper beeros, and an effervescent southerner, with perhaps a Sussex accent, greeted me as I tried to order a beer I thought might actually be 11%!  Turns out it was in roman numerals, and V. I I meant it was 5.2% and not a beer called "V" which is 11%.  But seriously, who puts their alcohol percentages in roman numerals?  A BRAPA first.   Luckily, a kind bald red man said he'd thought the same thing, so I was kind of accepted by the locals.  Having said that, as I squeezed into the one remaining table in the front bar, my Tim Taylor Landlord t-shirt got a few weird looks, and was sure either 'Hiding Hagrid' (resplendent in pink) or a sulky bald fellow who's friends left, were gonna quiz me on it.  Instead, they slagged off Doom Bar and joked about pronouncing 'Bombardier'.  Oh, the fun we have!  I didn't realise there was a much bigger back room, but then again, always nice to be where the action is. I bumped into a lady on the way back from the bogs who was bemoaning the number of steps to the loo.  Guess she's never drank in a Wetherspoons.  In the true spirit of South Yorks pub chat, someone told an anecdote which involved someone chopping an incorrect cable, a fuse box going bang, darkness and mayhem!  I'm sure I hear this story in every South Yorkshire pub.

I had to restrict myself to a very strict 25 mins in here or I'd have really struggled to get myself back to the station for L**ds without it becoming an all-nighter.  Bit of a shame as I had another micro to do just half an hour walk in Hoyland Common, but will now have to do that on its own, maybe when I've cracked Sheffield were most of my remaining South Yorks ticks are.

For now, I had to get myself back home for a reasonable time as we had Beeston (Notts) fun on the horizon tomorrow.   And I'll tell you about that next time.