(Adopts Gary Lineker voice ....) "Derbyshire started the day in 14th place in the BRAPA league table, but a six pub victory could see it climb as high as 10th by the end of the day.  Your commentary team for this one is Si Everitt and no-one else...."

"Thanks Gary.  Martin the Owl serves the last of a three game suspension following his poor conduct in the Standing Order Wetherspoons in Derby a fortnight ago, but the Green Highlighter starts for a 542nd consecutive game....."

Sorry, I can't keep this up.  It was back to Derbyshire then for my final "A" tick having done Apperknowle and Ashbourne already.  I based myself in Matlock, a nice friendly town I'd never been to before, which had three ticks to 'enjoy'.  I had a few options for where I could go for my remaining two ticks, but was undecided at this stage.


Despite another Derbyshire Wayfarer ticket purchase, train and bus times were unkind so I taxied it up the hill out of Matlock into the surprisingly (to me) rural village of Ashover where my jolly driver suddenly, and totally of context, started talking about this crazy old lady who'd fallen out with her best mate.

Making a good start here would set me up for the rest of the day, so when we arrived at 11:50am, I fully expected to have a ten minute wait, but to my surprise the door on the left was very open.  Dare I try going in?  Is the Pope a Spirite?  I mean, 'yes'. 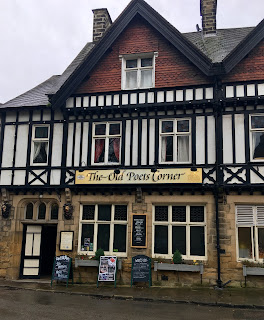 Of course, I half expected to be confronted by a Henry Hoover and some stern looking staff screaming "WE'RE NOT OPEN YET!" despite the evidence to the contrary.  But to my amazement, the pub was throbbing with Derbyshire's old folk, walkers and potential diners.  It was in full swing.  I'd been told this pub did its own Ashover beers, but despite about 10 ales being on, none were Ashover ones.  Thank goodness for bar blockers eh, as the delay getting served at the main bar allowed me to spot a kind of 'side bar' with all the Ashover clips on.  So I got a 'Zoo', 5.5% for starters, the first of several unwise beer decisions today which'd lead me to have little recollection of Belper's micropubs!  A great pint though, and I found a smoky wood fire to perch by.  But it soon became obvious I'd chosen my seat badly (just as I did in Thorpe and Ockbrook on my last Derbys outing) as it was on a walkway to an outdoor smokers patio area, and near a couple of dining tables soon to be inhabited by families.  Worse still, a boilerman was Skype calling a lady and getting quite irate with her.  "YOU NEED TO LISTEN TO ME, THIS IS IMPORTANT!" he bellows.  Finally, she listens.  "NOW, PRESS THE NOB TWICE, YES, TURN IT CLOCKWISE .... YES .... YES .... EUURGGGGGH! YESSSSSSS!" he concludes, and puts the phone down.  I think he was a boilerman anyway.  But it was too much for me, I moved to a quiet dark side room.  Piped Six Nations was also coming through by now, it haunts mi BRAPA days that competition, I tell ya.  At least now, I could admire the beauty of the dark woods and stained glass.  Not long after, two yahoo types sit down.  His first line .... "Probably my favourite matches to watch are the varsity matches ..... wall to wall army n navy, yessss!"  What was it with this pub and weird sexytime talk?         I was just about to bemoan the lack of Titanic Stout beermats in this section of the pub, when a bloke plops some Barrowhill Beer Fest ones on my table.  I went once, wasn't impressed, cold, expensive and busy, but my friends loved it and said I was harsh.  Oh, and it was now time for t'bus. 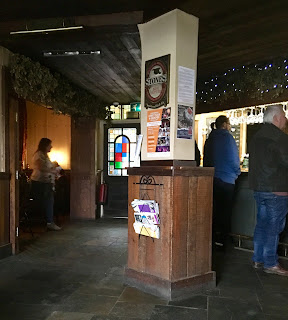 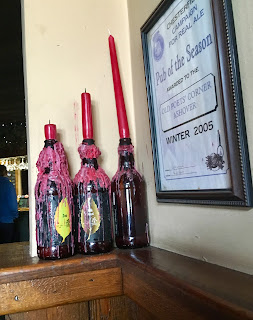 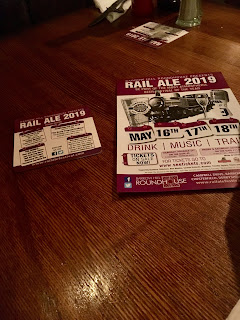 I thought I was pretty bloody clever getting off the bus at the top of the hill, near a GK pub called the Duke of Wellington.  Well, that was until I saw the bus turn right down the road I needed to be on anyway.  Oh well, only a ten minute walk or so ......

Yes, pub two was high atop Matlock centre, looking down with an aloofness at the more modern offerings in the town.

As is so often the case in recent BRAPA outings, I thought "I'll do well to top that first pub all day", only to find the second one even better!  The erroneously named 'Storm Hannah' was whipping up a reet gale, and I was glad to get through the door, where the Red Dwarf crew were enjoying a cigarette outside ....... 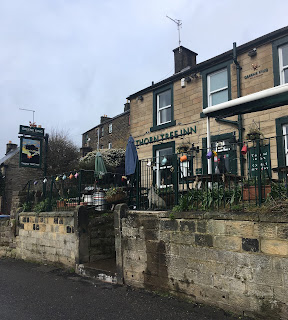 This is the kind of reason why I'm enjoying 'ticking' Derbyshire more than your average U.K. county.  A small two roomed pub, I squashed in at the bar where a slightly harassed and little bit manic barmaid who seemed to be in the midst of some mini-crisis serves me a Bass, the only time I saw this famous ale today.  I didn't get a glass with a red triangle on it like the locals did.  It's hard being an outsider sometimes.  I took my pint into the quieter right side, where three old men barely batted an eyelid at my arrival.  They just sat stock still, drinking Bass, and staring glumly into the centre of the room.  But I think they were smiling inside.  Six Nations was on a small TV above my head, it made no impression on anyone.  The only noise came from two other men perched on the side, laughing and rattling their dominoes, which lasted the entire time I was here.  One had Bass but one had something orange in a Bass glass.  Orange juice?  Or Craft Bass Mango DIPA?  I could see through into the kitchen.  Two microwaves that looked like original 80's models.  If this was an Antic pub, they'd be on some fucking wall display like "Ooh look how funny technology was in the olden days?" , but here they were fully functional probably serving slightly warm Rustlers burgers.  Where were the gents loos?  I offend a woman walker with short hair by asking her.  "I HAVE ABSOLUTELY NO IDEA!" Jeez, I was only asking, like if you'd SEEN them!  Of course, they were outside, as is the case in so many great pubs.  No sign of Rimmer or Kryton now, but Chubbier Dave Lister (how's that possible?) and Alfreton Cat were sheltering from the wind having an intense conversation.      Top pub, a MUST visit. 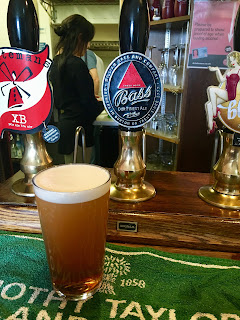 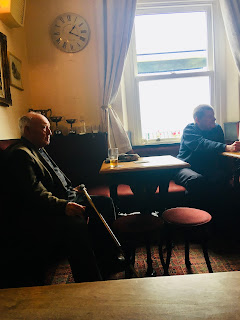 A hairy downhill walk through the wind and rain into the centre of town followed for my other two Matlock ticks.  I came to the first, but my phone started going on a bit of a weird 'stop start go slow' then crashed totally so I was a bit discombobulated when I entered.

It was always going to be something of a come down (in more ways than one) coming into a knowingly more modern real ale bar ..... well, I couldn't really call it a pub.  The name had me craving a chocolate or coffee stout or porter (Mocha) but I was told it is pronounced Moe-car and is a combination of the names of the people who opened it.  Possibly Moe from the Simpsons, it wasn't clear.  But a BRAPA rule is always be suspicious of a GBG entry with a capitalised letter in the middle.  Entries such as the PieBald Inn in Hunmanby, the Round RobINN in East Leake, and of course, the TwatFace Tavern in Maidenhead are good examples of this.  But the longer I spent here, the longer I felt myself nodding and going "this is decent actually".  Barman was a good geezer, and I got some weird high percentaged New Zealand hopped monstrosity, enjoyable, and I could do a sombre tribute to Christchurch (the one near Bournemouth for having two peculiar pubs, I mean).  I sat near a load of faceless musicians at a high table and got my phone back working again, but weirdest moment of the day was upon me, in some style.  It started when I saw three middle aged blokes peering into a buggy (never a good sign) imploring this green beaker wielding youngster to look at this phone screen, where an Asian lady (possibly called Giff Gaff) was waving back saying 'miss you darling'.  He was more interested in getting back to Peppa Pig on his tablet.  Then, a lady who'd vaguely been hanging around them started combing said toddlers hair.  Perhaps she saw my curious expression, for she walks over.  "Nit comb!" she says, brandishing it far too near my left lug 'ole.  "He's had them on and off for ages now!" Lovely lady, but incredibly random, she's an East Midlands train driver if that explains it, bemoans the fact he won't even have a bite of her cheese sandwich (neither would I), and soon we are chatting BRAPA and local pubs!  A bit bewildered, I said goodbye and with an itchy scalp, made my way to pub number four. 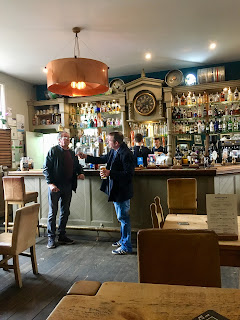 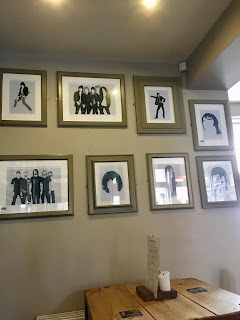 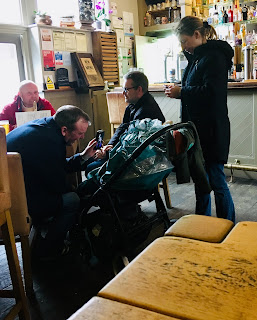 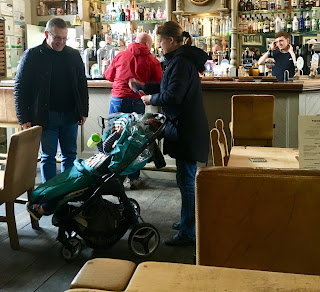 Well, this had been an enjoyable start to the day it must be said.  Three pubs to go.  I can't remember much so here's to a vaguer blog tomorrow!  Cheers.