BRAPA - Waiting for the Hammer(smith) to Fall

Seems strange, all these Hull City away days at places like Brentford, QPR, Chelsea and Fulham over the last few years, and never once have I thought to tick the three pubs in Hammersmith before!  Chiswick, Brentford, Paddington, even little bits of Ealing and Acton, have all fallen, but never Hammersmith which let's face it, even in terms of London's wonderful transport options, is one of the easier places to 'tick'.

Today was prime NFFD (Non Football Football day) with both myself and Dad deciding we just weren't 'feeling' yet another trip to the brilliant Griffin Park, even if Brentford were below us in the league and are form had been pretty decent recently.  Not like we were gonna get stuffed was it?

We had BRAPA-guest royalty with us in the form of Tom Irvin, his father Chris and Christine 'Chrissy' Andrew of North East Lincs CAMRA (not TWAMRA) fame.   Our first pub, a Wetherspoons, as is so often the case on such days, didn't look anything like a 'Spoons, more like a bright shiny bar attached to a Holiday Inn.  How quaint?  Well, not really. 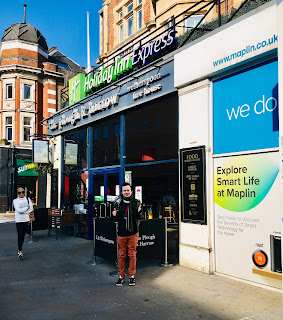 Oh this just won't do at all(!)   Light, airy, smell of what's that .... 'cleanliness'?  Staff motivated to serve you.  A bright red wall.  An almost hushed atmosphere.  No huge morning rush for breakfasts and hot drink re-fills.  No sticky tables?  An almost tasteful carpet?  Okay, okay, I jest .... as you should know by now, I'll defend the 'Spoons chain against the 'haters' but this was quite different.  I'd almost feel short changed and if it wasn't for the fact I used FOUR 50p off vouchers (a record for one sitting) to get a round for £7.40, in London!  And the ale quality was excellent, a red rye style ale from Twickenham chosen cos it looked a bit 'you're gettin' mauled by the Tigers (grrrrrrowllll)' on the pump clip.  We sat down at posing tables with our three buddies, joking that since my appearance on Radio Solent that I'm too famous to be drinking with the likes of them.  By the way, 96.1 or 103.8 FM, Steve Harris, no better way to enjoy your tea n toast first thing.  Sorry, I digress, yeh there were a few blokes with characterful faces who appeared but other than that, you could almost be unaware you were even in a 'Spoons.  Good job I ain't invented a bingo card for them (yet.....) 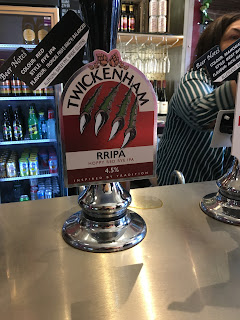 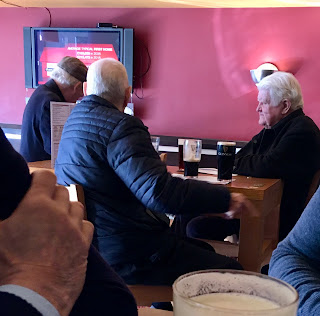 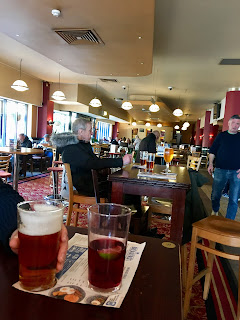 Next, we went under a subway and found ourselves by the river.  I did spy a great looking pub but not in the GBG so of course, it MUST have something wrong with it ....... 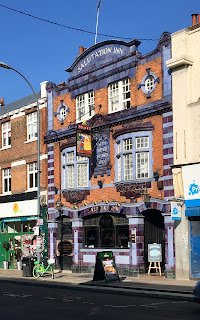 Anyway, it was all very beautiful on another glorious spring-like morning as we finally got within sight of our pub down a narrow side street, bit like going to the Ackhorne in York....... 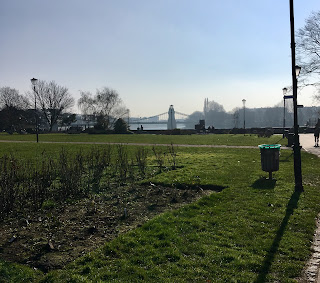 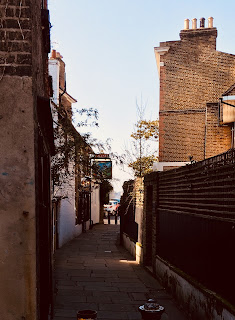 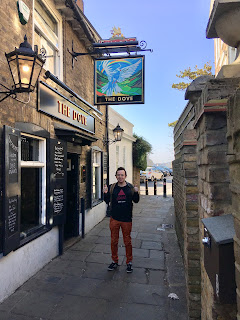 Well here we go, I'd actually heard of this pub so it must be quite a famous one.  Had I come in at a different time of day, I may well have experienced something quite horrifically dining judging by the laid out tables and recent testament from Martin Taylor and Tim Thomas, so I was delighted to have experienced it in all its glory today, being as it was, still before 12 noon.  The pumps were facing inward towards the bar (the first indication of how small the pub actually is) and a fantastically friendly and helpful barmaid got us all a Dark Star Hophead (and a blackcurrant for the Tom).  Although this was a Fullers pub and I keep seeing Hophead in their pubs, she emphatically told us Fullers don't make it now and it's still in Brighton which I guess is something!   We meandered up some steps into the outdoor area (again had the weather been not so grand, we couldn't have experienced this) and sat overlooking the River Thames, and That London as a whole, quite spectacular.  Cambridge University were practising for the boat race, it seemed to upset Tom who chanted something rude and confusing at them.    Can't remember what we talked about, probably Hull City, but Dylan Thomas, Alec Guinness, Ernest Hemingway, and now Tom Irvin, this pub really has seen it all!

Me and Father BRAPA said farewell to our friends, who were trying to cross Barnes Bridge or something to get nearer Brentford as they were going to the game, a sensible decision perhaps?  We'd see.

We walked back across the subway, past the 'Spoons into the tranquil leafy side streets of Hammersmith proper for our third and final pub in the area.

As we approached for the traditional 'outdoor photo', a red shorted bloke who was trying to be a proper geezer, "givin' it large" on his dog n bone whilst wheeling his dick van (Dyke = Bike, new cockney rhyming slang)  around suddenly panicked and tried to get out of shot, but too late ..... 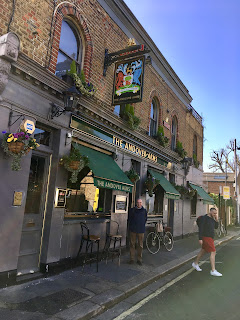 Again, it was quiet enough to appreciate the attractive old pub interior that this place possessed.  As the GBG says, it feels kind of rural, and although this might sound strange, in the back room to the left with the hearth (sadly not lit) and rug, it reminded me slightly of Hark to Bounty in Slaidburn the previous week.  One thing which wasn't quiet early on were my black and orange stripey trousers, and the barmaid looked rather terrified of them as we walked in and I got the drinks in.  But a few reassuring smiles were aimed at convincing her I wasn't a madman.    Red shorts bloke plus one other had also appeared, unhelpfully dotting their unattended pints around the room, so when Dad returned from the loo, he wondered which pint was his, the answer being neither.  The Pride was drinking well as we sat in the back room, until rather inexplicably, very loud piped Lady Gaga sprang into action, destroying the atmosphere in one cruel blow!  Piped music very rarely helps any pub, but this loud at this time of day just seemed crazy.  I wouldn't have even known it was Gaga unless my 'Shazam' App hadn't done the necessary.   Time to leave then, the Hammer(smith) had fallen but it was more Lady O'Gaga by the end!


Of course, with no football, great chance to get my six pub quota for the day.  I can't remember much about it so join me for an altogether vaguer blog tomorrow night!