BRAPA - Rock Around the 'Ock(brook) 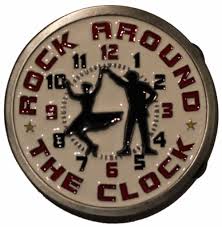 Saturday 2nd March and I was half way through my first 'official' BRAPA trip to Derbyshire.  The Standing Order Wetherspoons in Derby had been good, the Smiths Tavern in Ashbourne very good, the Old Dog in Thorpe a bit of a lame duck.   The best (& worst) were still to come ......

Mapleton (possibly pronounced Mappleton which makes me hope the locals had Mapple Syrup on their Shrove pancakes this Tuesday gone) was a bit off the Tissington Trail, so it called for one of those hair raising BRAPA road-walks from Thorpe, which I've not had to experience too much recently thanks to wonderful chauffeuring efforts from Martin Taylor, Father BRAPA and the like.

Luckily, a right turning found a much more serene country lane, which led me into the village of Mapleton as the wind whipped up and the clouds of Storm Freya started gathering above ...... 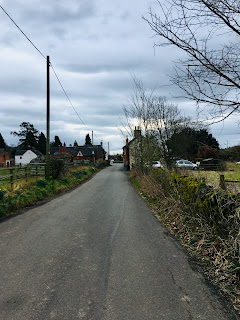 The pub looked nice and bleak.  Quiet, perhaps, off the beaten path?  Well, I could hope ..... 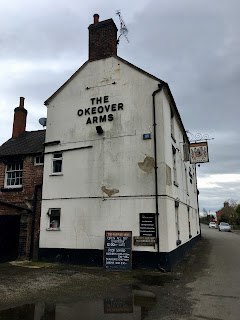 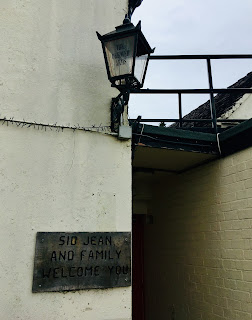 But I suppose any rural Derbys pub doing food, visited on a Saturday lunchtime, is always going to have a strong dining presence.  Good news, it was at least, more of a pub than the Old Dog.  It had beermats, a warming woodburner, it had proper glasses (sort of), and a pretty old crowd simply sat still, having a feed and a water.  Not many friendly faces unfortunately, as I swung my rucksack round towards the bar, and the barmaid served me in quite an offhand manner.  When I later asked her where the Gents was, she simply grunted and pointed.  But much later, I heard a local bloke ask her if she'd recovered from her bad experience and even alluded to hearing she'd not been herself lately, so for once in my life, BRAPA will not be judgey.  Okay, well maybe a little bit.  Fortunately, I sat next to a lovely old couple chomping their way through a mixed grill, the wife finally beaten by a fried egg of all things, oh she was so close but hubbie shovelled it into his gob in one go, that is true love!  It got me hungry, and as soon as another older barmaid looked moody, I started smuggling my mini sausage rolls in the middle of all the dining.  I know the ghost of the late great Alan Winfield would be judging me for this, but he'd probably wonder why I'd suffer walking miles to come to a pub like this in the first place!   The ale was slightly above average, and the clientele were the kind of social misfits who need the presence of a dog or two to spark a conversation.  The owner, a po-faced mardy bugger who'd scowled at me on arrival, explained all.  But just because you've travelled from Staffordshire (said like it was 300 miles away) and are the proud owner of two gorgeous Border Collies from a rescue centre, it doesn't make you a good human being.   As a random pile of logs sat there doing nothing, I'd seen enough, time to go.

Another walk took me back to Ashbourne, where the locals were confused because their usual 'bus station' was being refurbished or some guff, so everyone dithered on the side of the road asking what was what.

My team were having better fortunes v the mighty Birmingham City, and buoyed by Dad's textual updates, I was up for two more pubs.  The easy option would've been of course to mop up my remaining Derby duo, the Last Post and a micro pub with Chester in the title.

But when has BRAPA ever been about the easy option?  No, just in front of me at Morledge (think Ben Morley and Roland Edge in a blender)  bus stop, the last number 9 of the day was about to depart for this place no one has ever heard of called Ockbrook with two pubs on the same road.  Bazinga!   Getting back might be an issue, but let's just enjoy the pubs first, ask questions later.

The journey sadly, was blighted by the fact my phone charger lead had broken and down at 25%, I had to hold it in a very specific position to keep it charging, which looked a bit rude and freaked out the only other passenger!

Too traumatic, I was glad to see the first of two pubs as the light started to fade and the rain came down ..... 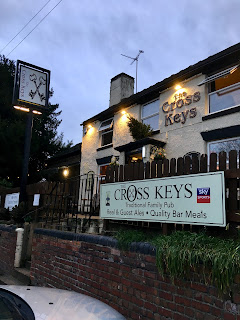 I didn't realise at the time I was stepping into my 2,500th overall GBG pub, quite the landmark!  It was a good introduction too, as I fought my way through some much friendlier locals than I'd been used to today to the bar, where I ordered an Oakham Citra and the personable barmaid says "here's one I've just poured!"  "Wow, how did you know?" I asked, knowing full well there must've been some recent serving mix up.  "I'm a mind reader!" she replies.  But before she asks for payment, she says "anything else?" to which I reply "no, but I thought you'd have known that!" which I thought was rather quick witted and brilliant of me, but she just looked a bit pissed off!  Oh well, for the second time today, I did myself no favours as I reckon (though I'm unsure) that the right side of the pub was the pubbier more atmospheric place to be, but I ended up squashing myself behind a pillar to the left with a bright light shining on an astroturfed garden and a very unpubby dining seat.  So not sure I enjoyed the pub as much as I could have.  Derby County memorabilia adorned the walls, and everyone crowded around me to watch West Ham or some shite.  One Derby County guy looked at me like I was Villa Scum, everyone wondered who Steve Holland was (who is he?) and then a family of 4 sat by me.  The bored teenage sons looked like the band Hanson, the Silver Fox hubbie tried to impress them by saying "pizzas are awesome dudes" like he was a Teenage Mutant Ninja Turtle.  They rolled their eyes, but he did later say something so genuinely amusing, I snorted Citra, but can't remember what it was.  All the while, I was having to hold my phone lead at that weird angle, but let us just say this experience fell just short of something very good. 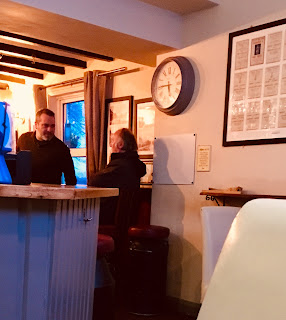 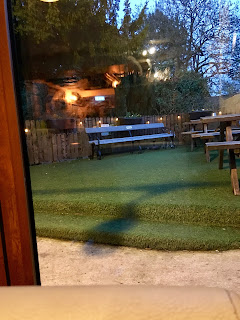 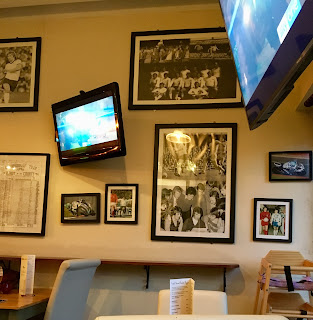 A short walk down the road took me to my final pub of the day, and I remember thinking "ugh, not a Royal Oak, they are never lucky for me!" on arrival. 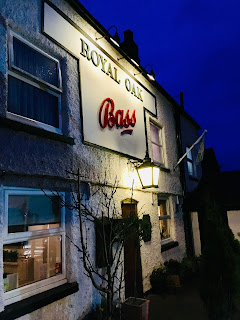 But here, we'd rewrite those Royal Oak Wrongs in some style.  "Bass!" screamed every sign, surface, lamp, mirror, pump, as I walked from front garden car park area into pub.  It felt like a Midlands Beer Twitter Tourettes Party.  The bar area was beautiful, curved by looked 50's or 60's and quite unusual, of course I had to have the Bass, end the day as I'd started it in the Standing Order.  Bit of confusion here as to who was supposed to be serving, and a young lady with an air of passive aggression came out of nowhere, served me and others, explaining to all and sundry that she's had to 'jump on' but she's not really supposed to be on!  Uh oh.  The Bass was warmer than you may expect of an ale, never a problem for me cos it brings out the flavour, but some wouldn't be amused.  "Like a prostitutes liver you've stored in the basement for a bit too long" I wrote at the time, and wondered if I should get back on Untappd.  I actually meant it in a good way too!  Then drama as a book went missing, could it be under my seat?  No.  I was relieved, it might look like I'd nicked it.  Just as I was relaxing into what a gem of a place to drink this was, landlady notices my GBG so I BRAPsplained.  Her impressed hubbie is listening from the door, and soon is giving me a guided tour of each room of the pub, their awards, the history, couple of local CAMRA mags, was really interesting actually!  I'd seen some condolence cards on the bar on arrival, and it turns out the guv'nor Olive (who'd been here over 60 years I think he said?!) had died two weeks back, and though she hadn't been active behind the bar of late, her name had been above the door.  Well, Olive can be proud of the legacy she's left, I don't to pubs this good more than a handful of times a year!  They both seemed doubtful of my plans to walk to this vague rural bus stop, instructing me to instead walk to Borrowash and get a bus from there.  Travel advice too!  It'd get better ...... 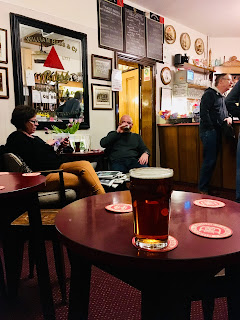 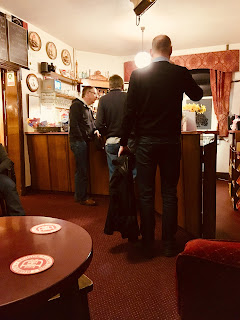 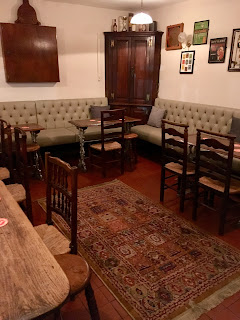 As I said goodbye to the landlady and took my glass back, barman reappears with car keys.  "He'll run you down to Borrowash" explains the landlady.  Wow, what a gent.  So we're in the car chatting, and at the roundabout, he says 'change of plan', and turns the car towards Derby and drops me off at the station.  WOW!  Incredible 'above and beyond' service.  He even broke me off talking at Pride Park so he could boo it, he's a Forest fan, so we chatted about our game (Forest v Hull City) next week and he correctly predicted "you wouldn't wanna go back up to the Prem anyway would ya?"

What a gent, and end to superb day.  If today was indicative of what Derbyshire is going to offer me, I'm going to enjoy it immensely.

Just time for a swift half of that strong Siren Craft black stuff in Sheffield Tap before the last leg of the journey back to York...... 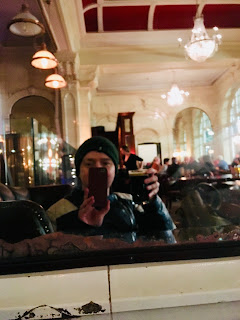 Up to date on my blogs for first time since 8th Feb (23:22 on Thursday night as I write this), I'm getting on the South Yorkshire Friday night trail tomorrow as I'll only get three done in Notts on Sat.  Join me for those two reports in the coming days, thanks for reading, I really appreciate it, I know I ramble on a bit!