BRAPA - Feed the Beeston He Will Score : BRAPA Confessional

My first Nottinghamshire pub ticks since New Year's Eve 2016 were had on Saturday in Beeston (not to be confused with the terrorist hotspot near L**ds).  Hull City were due to play away at Forest in one of those 'neither team quite good enough for the play offs but if we concentrate hard enough, we can convince ourselves we are' type of 'six pointers'.  I'd done all the central Nottingham pubs so needed to think outside the pelanty box, as Chris Waddle might say.


There are three pubs in the GBG, the first of which was a 10:30am opener but this annoyingly, was the one nearest the railway station.  Pretty much the whole football gang were out, Daddy BRAPA, Tom 'Beast-Man' Irvin, Christine 'Chrissy' Andrew, Ben 'Bouncing Birthday Boy' Andrew, Father Chris Irvin (definitely not a priest) and Mother Bernie Irvin (probably not a nun).

Well, the first pub was open on time and looked rather impressive from the outside with its Ind Coope & Co frontage which must be up there with shopmobility scooter and a John Smiths lantern for 'indicators that a pub'll be good' .......

And a gorgeous main bar set the scene for a good hour and a quarter of relaxed pubby brilliance.  Last week in Ockbrook Royal Oak, the landlord had given me a Notts CAMRA mag.  I've had their mags before and like them more than most, big, fun and bright like the Mr Men colouring books you used to get in Berni Inns down near Saffron Walden, rather than the dull pious church warden style mags you often see.  It had a special middle page pull out where if you got a pint or half of porter of stout in selected Notts pubs, you get a special sticker, like a brave twild doing well at the dentist.  Even though I didn't order a porter or stout, she still gave me a sticker.  Yayyyy.  And that is the measure of a good pub.  We did get some Mild, that's near enough surely?  Actually, my first ale was a bit dodge and I usually like Welbeck Abbey but it had a 'first of barrel' about it.  My second gorgeous though.  We'd invaded the landlord's space a bit in prime position in the main bar, a jolly chatty guy but a bit of a know-it-all (especially when Christine tried to tell him about BRAPA and he claimed to know a local guy - once legend, now dead, who ticked off all pubs n beers and just said 'ding dang do' or 'flush it down the loo' depending whether the pub n beer were good or bad!  (Not the exact things he said, but something that rhymed).  We nearly got caught out trying to get the CAMRA discount on our ales.  NOT available on a Saturday.  "Never mind, in this day and age, admitting you are in CAMRA is like admitting you've got leprosy" I reflected.  Everyone just nodded with an air of resignation.   Beyond the gorgeous main bar with basic cheese rolls and ales aplenty, the other rooms were more like a restaurant, fully kitted out for dining.  Dad was right when he said it reminded him of Bartons Arms near Villa Park.  A huge compliment of course, but the pub could STILL be better.  However, someone on my Twitter argued this main basic pub room feels all the more special to be surrounded with dining, 'a pub within a pub'.  Am not sure but I take the point.  Apparently, they had great vegetarian and vegan options available too, said the Irvins, and in 2019, isn't that all that really matters in your local boozer?


So despite the odd slight point I felt this pub could improve upon, you'd class it well above average in the grand scheme of things and I doubt any of us believed we'd visit a better pub today as we braved the bracing wind with the vague directions of "look for the war memorial" in our minds.

Good directions as it happened, as soon as we saw it, pub two was visible just out to the left....... 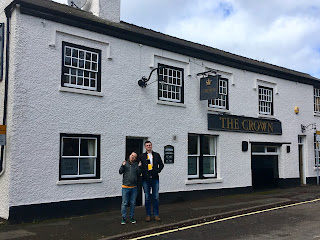 Astonishing as it seemed at the time, this pub was better than the Victoria, as we turned right into the tiny main bar (the seven of us properly filled it) with another ridiculous selection of well kept ale (Saltaire Triple Choc was better when it was called Triple Chocoholic in a Macaroni Cheese / Mac n Cheese kinda way!), and an intimacy and sense of history and atmosphere, helped by a tiny confessional booth at the far end the vicar used to use.  'Twas time to confess my BRAPA sins, it seated three, but any of you into confessionals will know two is company, three is a crowd, even if the BRAPA lawyer and Martin the Owl are present.  I explored the rest of the pub (well, I needed to pee) and found a warren of perfectly formed old rooms and snugs leading in all directions, all superb, not a knife or fork in sight.  Quite a jaw dropping pub this, I know me and Dad ranked it our pub of the day and sure the others did too from memory.  Staff were friendly too, bar bloke asked us where we were heading today, so out of courtesy, Ben n Chris asked him who he supported.  Bit surprised when he replied "Monchengladbach" and there was an awkward silence as we tried to remember if they had any former Tigers in their ranks!  A bit of crossword answering (Quadragesima, look it up!) and a Hull City 'on this day' quiz followed, which I'm pretty sure I won, and although part of me wanted to stay here all afternoon, it was time to prise ourselves away from yet another early candidate for BRAPA pub of the year. 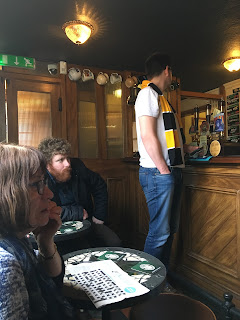 Anyway, not far the other side of the war memorial lay our third and final tick of the day ...... 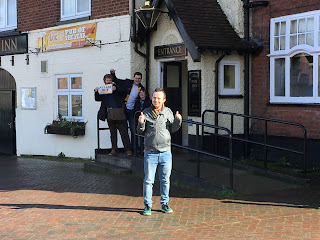 I'm glad I read Martin Taylor's recent blog about this pub in the aftermath of my visit, because otherwise, I may have forgotten what a fantastic pub this actually was based on the main bar area where sadly, and unlike the previous two pubs, there was not enough space to seat us all.  But abandoned Amstel and reading glasses, Bass memorabilia and fascinating clocks, not to mention good staff and I must say, the best quality beer of the day was enjoyed here, on a day of generally above average quality ale.  I'm sure the fact they'd won a top toilet award in 2015 is no coincidence, a pub where they take pride in looking after their pipes and lines (I'm not saying the beer ones are interconnected to the bog ones, but I've often thought that of some pubs I've visited).   Unfortunately, the seating circumstances and the fact that the Star lacked the 'strength in depth' of the Crown (bit like Hull City's defence) meant we were soon sat in a giant marquee (well, a tent), very much the Angus MacDonald of pub rooms.  Having said that, it seemed to be indoorsy, it had a radiator, and despite the obvious short comings, was warm and comfortable for the most part, until someone turned a light off and opened a door, and soon an icy blast was sweeping through.  Kind of tactic you'd expect to happen at last orders when they are trying to clear everyone out!    Shame really, as it soured the overall memory of a pub that had performed better than we remember, and had a lot to commend it. 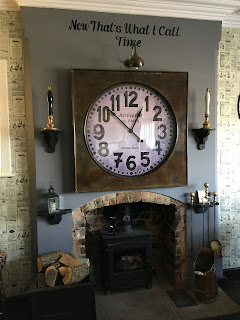 Train back to Nottingham then, and it wouldn't be a Nottingham Forest away day without a visit to my all-time favourite, not to mention convenient for the ground, VAT & Fiddle which I've had many a quality pint of various Castle Rock stuff over the years.   Times like this, I wish I was taller like Ben who did a magnificent job (probably performance of the day!) of getting a round in for all of us in what was a very busy three deep pre-match scene by now so we squashed towards the back of the pub by the live music board. 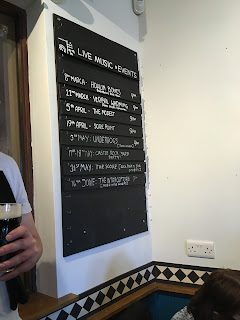 En route to the ground, we had time to have a quick 'moment of respect' for our missing football friend and all round East Yorks CAMRA legend,  Mark Bainton, who injured his knee at this 'leg' of the journey a few seasons ago ........


The match itself was disappointing.  Both teams terrible first half and no goals.  We came out really strong second half and I thought "wow, we're really going for it" but one good piece of Forest play, a good goal, and then our flimsy underbelly re-appeared and we collapsed, losing 3-0.  Shame as we had won our last 5 games at the City Ground which must make the VAT & Fiddle one of my luckiest pubs!

Post-match, me and Dad got back in and a little bit easier to get served, we even got "our" seat.  A group spied us looking glum.  "Cheer up lads, it could be worse, you could be Notts fans like us!" they roared, meaning of course, Notts County.  A nice bunch, my Preservation Red ale was gorgeous, in any circs, I seem to enjoy this pub.  Happy Birthday to Ben too, hope Hull City didn't spoil his day, we saw this on our table ....... 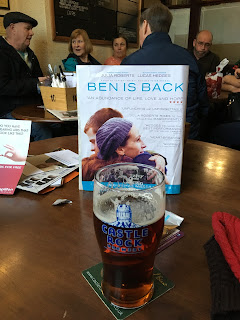 Time to run for the train, where we met back up with Bernie and Chris, Tom had gone off gallivanting somewhere crazy like he does.  End of a good football day, and plenty more to come on Wednesday in another place beginning 'No' in a county beginning 'No' which I often neglect.