Two days to recover from that liver shattering 30 pub holiday in Dorset probably wasn't enough, but when your kind father is offering to drive you around some of East Lancs more rural GBG outposts, I was never going to say "no, I think I'll stay at home with a cold compress to the head and cucumber slices on the old eyes".

Also, I was making my 'radio debut' on BBC Solent (why would you want to listen to any other station?) on Monday morning so was nervous and needed a distraction!

We'd been inspired by our outer Blackburn day, classics like Pendleton, Whalley and the like had been one of the best pre-match sessions ever.  Today, thanks to Millwall's cup exploits (which ironically had included beating us), we didn't have a league game today so perfect opportunity to get deep into Witch Country.

Before Dad arrived, I popped down to my local B&M store to get a pictorial clue for our first pub....

Of course, me being me, I cheekily pushed the boundaries well beyond simple "outer Burnley" and after some winding painstaking country lanes, dirt tracks, dodgy bridges, near tractor collisions and breath taking scenery, we dropped into the small village of Slaidburn for pub number one, feeling quite sorry for Dad, as Martin Taylor hadn't endured anything close to this traumatic even around Gussage, Sixpenny and those mystical North Dorset places. 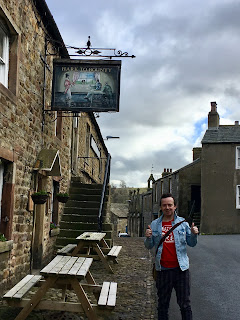 Even on the GBG map (turn to page 239 in your 2019 copybooks), Slaidburn looks very much 'out on its own' and it felt it!  A very friendly barmaid brought us over some ale but then, in what we call the 'Leighton Bromswold conundrum', didn't take payment for it, leading me to optimistically think this was a nice goodwill gesture cos she knew I was a pub ticker who deserves loadsa freebies, but the more pragmatic Dad kept a tenner on the table in case she returned, so it didn't look like we were being dishonest! Perhaps she'd opened a tab assuming we'd be eating.  That's what people do in places like this, right?  Although the pub wasn't multi-roomed, it was divided into smaller areas (if that makes sense) and we sat near a lovely roaring fire good as both beer and temperature were quite chilly!  If it didn't already feel ancient, on highlighting the GBG entry in the customary green Stabilo Boss, Dad noticed the line "ask for the key to see the old courtroom on the first floor" line, so did (wasn't locked anyway).  Wow, well pub is residential too and in amongst guest rooms, those incredible untouched fusty smelling room, you could feel the ghosts of yesteryear in the dock, wonderful, not sure I'd want to stay in that guest room at the end and have to walk through here in the depths of night looking for the loo! Oh, and Bounty was actually a twog.  His master could hear his distinctive bark above all the other hounds, the kind of boast that probably impressed Slaidburn folk back in the day.  A gem to start the day, and yes, we did pay on the way out! 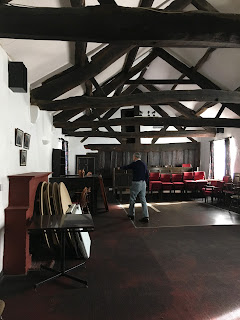 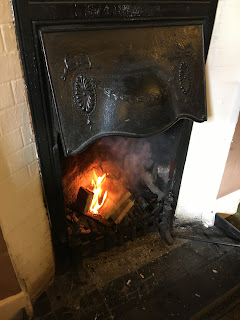 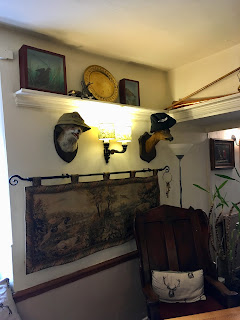 "Doubt we'll find a better pub all day!" I said to Dad as we walked around the corner to the car, as another tractor appeared from nowhere to nearly mow us down.

Our next pub was due South, just outside Clitheroe, and a good job we weren't planning to go into Clitheroe too as the road was closed.  Initially confused by a nearby Marston's called the Upper or Higher Buck, this was a real lesson in 'make sure you go to the right pub', something I'm very conscious of for when I go to Adlington which has two Spinners Arms, one GBG listed, one not! 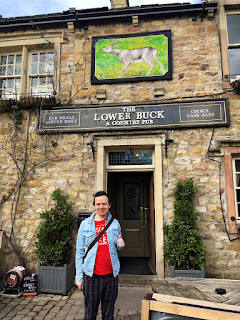 Well, we were being spoiled this morning!  Another stone built old fashioned classic, the main feature of which seemed to be the stained glass depictions of both red and white roses.  Dad had already said "oh wow, what a lovely pub this is" about 15 times as we ordered our Bowlandy ales when he commented on the roses, and the landlord, a real proper Lancs guv'nor of a bloke (friendly but you wouldn't mess with him!) told us the pub used to technically be in Yorkshire.  Hard to believe when you see how far into Lancs it seems now, the county border must've been all over the shop!  He even said he gets plenty of comments about it, and it is usually the Yorkshire folk who are idiots, which doesn't surprise me, even though I'd just admitted that's where we were from.  Then, a young barmaid who looked about 18 started her shift.  She was called Betty,  incredible, was like watching an Agatha Christie TV adaptation where glamorous young ladies are called things like Ethel and Winnie.  "I think I even prefer this pub to the last one!" said Dad.  "So do I, but why is this?" I asked.  We decided it was just a bit more 'together', Slaidburn had been a bit sprawling, but this felt more homely and pubby yet still with a strong sense of history, haunted courtroom or not! 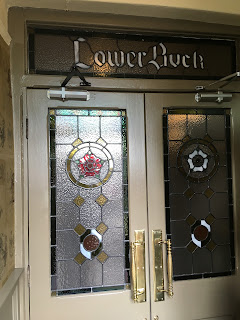 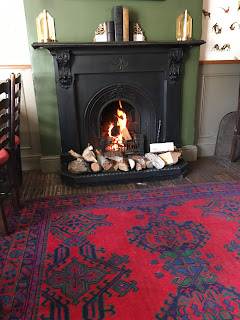 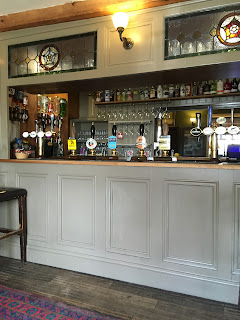 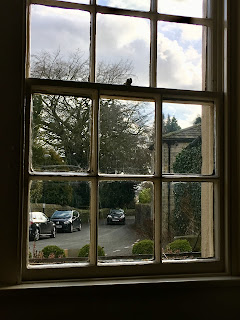 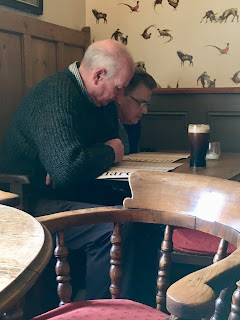 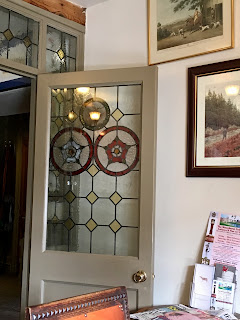 Next, it was back to (relative) civilisation, if you can call anything near Burnley civilised which of course you can't.  Not before we'd stopped in the car to have a munch on our sandwiches, but this weird old bloke with a sour faced wife pulled up behind us, knocked on the window, and says "I errrrm thought you might be errrm moving on soon so we can errrm  park here?"  Who does that?  Feeling we could no longer relax into our cheese & onion rolls, we moved on.

The roads got no easier as we circled Pendle Hill, where we'd come on a family holiday and watched Born and Bred pub/wedding scenes being filmed in a place called Downham.  In fact, we nearly ran over Michael French, that would've been a highlight of BRAPA-esque proportions.

By Roughlee, there was that many cones out, cars parked up, cyclists and walkers, we initially thought there must be some special event on, but as time went on, we realised this was probably just a standard touristy Saturday for those witch and Pendle lovers.  The weather was very spring like, which I guess helped. We basically had to fight our way into the pub!

We were very lucky really, even though we (especially Dad) would probably end up declaring this the poorest pub experience, we got a seat, and quite a prime one at that!  In fact it was so dining led on our visit, a lesser NW place (cough cough Clarence in Bury, cough cough Arden Arms Stockport #NeverForget ) may have tried to 'move us on' to a stool at the bar, outside, staircase or the like.  By the end, you could feel those eyes on you so not the most relaxing of experiences!   Staff in here were very attentive, hard working, guess they had to be, as some tattooed bikers came in and ordered that most bikery of options, chicken goujons, which a quick glance to my right told me was hidden Harley Davidson code for "I'm gonna kick yer head in if you photograph me, BRAPA".   The ale, all very Marstons, was Hobgoblin Gold, always a good one I find, and apart from a group of about 100 old people sat on the wall outside trying to break some wall-sitting world record, that was about it! 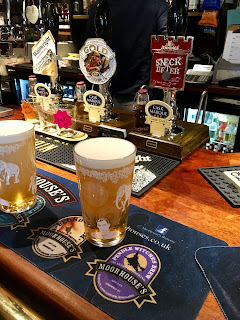 We'd reached the halfway point of the day, but still three to do (if I could persuade Dad to stay out a bit longer than he'd probably like!) but we needed to escape Pendle for some more peaceful pub choices.  More on that in tomorrow's blog.