Halfway through our Saturday, and it was a speedy retreat in the Father-BRAPA-mobile, away from touristy Pendle to take us to our 4th pub.  Barrowford seemed a happy little village, it had one of those special upmarket Booth's supermarkets that you have to be a North Western paisley fan to fully appreciate, and a quick calculation told Dad we could park up, enjoy 27.5 minutes in our next pub without getting clamped or a ticket. 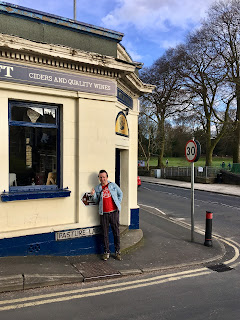 A former obscure Lancs bank that got swallowed up by some evil bigger chain bank (hardly Yorkshire bank is it darling?), 'ey up, I didn't realise this was a Micropub!' I thought, as we walked in.  Not many micropubs can boast a feeling of  central heating, a smell of ancient old building, or a group of ladies gathered around the bar discussing "Witherspoons" so this was already an above average micro before we'd so much as got sat down.   With a hint of hesitation, I ordered a a beer from Revolutions called Switch #13.  "They do lots of Switch beers with different numbers, all different hops you see, this one is New Zealand!" beersplained a ruddy faced friendly old bloke and I made a noise of agreement out of my nostrils as if to say "real ale eh?  What a fascinating thing it is!" (I was more concerned about lack of 'top up' really.   On a trip to the loo, Dad was followed in by the barmaid for extra peril, "don't mind me!" she says, pouring a load of beer down the sink (oi, I could've been topped up with that!)  It affected him greatly as he came back confused, and asked if we'd always been sat in this seat!  Yes, luckily I had photo to prove it.  The spirit of Child Okeford was very much alive as I returned from the loo to find Dad had now moved our pints, bags and coats to a different table, pretending we'd always been sat there, WHAT A JOKER!  Even the couple at the next table played along.  Evil. 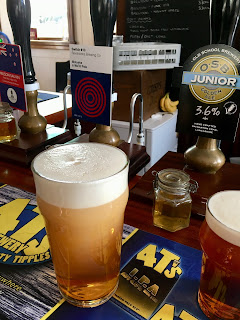 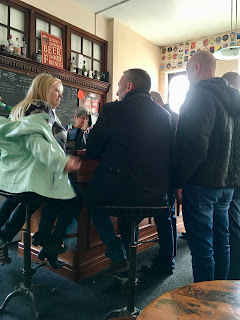 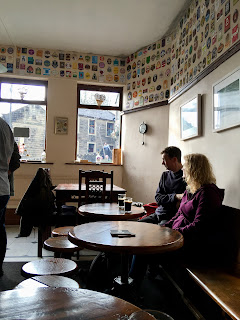 I felt like it had been tough driving for Dad so far today, so instead of getting up on yet another winding road up to Barnoldswick, we just continued along the more simple route to Colne.

There are three pubs in the GBG but Colne does have a railway station at least so I wasn't too concerned about getting them all done.  Funny thing is Colne, all the pubs have an Only Fools & Horses theme with a 'Lord Rodney', 'Boycies Barrel', 'Wallace Hartley' (probably a guest character), almost certainly an Albert or at least an Uncle Albert's Beard & Craft House.  And with the Del Boy Drinker, Cassandra Cask and Trigger Tap due to open in 2020, the future is bright. 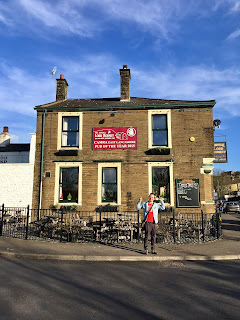 This was one of those instant classics where you walk in to mosaics, stained glass, posh tiling, a grand staircase, a bar in the main area with side rooms off in various directions.  Kind of reminiscent of something like the Swan in York or the Lamb in Eccles, or Three Pigeons in Halifax, or many more I'm sure you can think of better than me!  Point is, they are nearly always up north though I've still never pub ticked in Slough, which perhaps has plenty of similar examples, I just don't know.  Location wise, it felt like it was a bit out on a limb, away from main part of town so very much a locals local, and felt we were being kept an eye on a bit, hmmm, well until a lady at the bar announced she was thinking of going to Costa Rica, which was met with the kind of enthusiasm that's normally saved for a pregnancy announcement, so perhaps they just wanted to get rid of her.  But 5 pints in, never at my most observant so can't remember anything else that happened, but in a pub like this, it probably did! 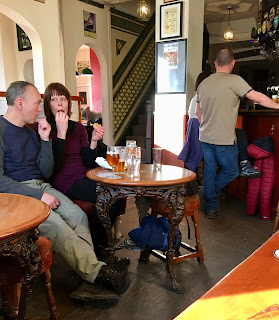 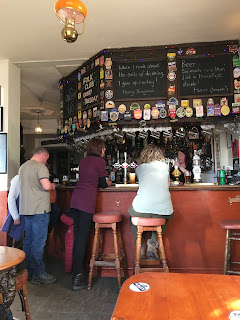 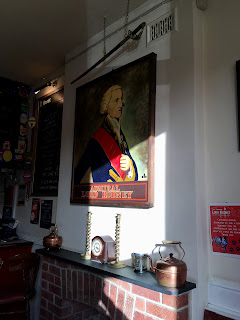 I'd managed to twist Dad's arm to get one more in before home time, as long as I stuck to a fairly quick drinking schedule.  It didn't help that despite being a huge pub called RED LION with RED LION written in big letters across the front, and a picture of a RED LION on the side, and being on RED LION street, we drove past it twice before we eventually saw it at the far end of the village down what felt like this never ending road.

Nor did it help that my phone went into video mode, making the next shot a painstaking experience ..... 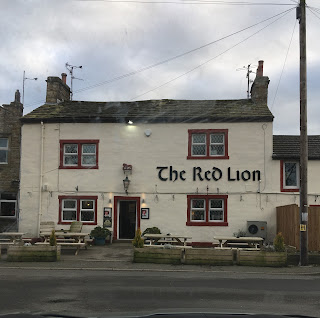 And this sense of being slowed down continued as we entered the pub to the left hand bar (as per BRAPA rules) but just could not get the barmaid's attention who was too busy chatting to the locals swarming around the left hand bar.  If only there was a bell to ring!  (Well, there was, we just didn't see it) so we finally gave up and wandered around, hurdling dog leads, retainers and zimmerframes to squeeze in at the bar.  Not that the the barmaid wasn't apologetic, it just felt it didn't need to be this difficult!  I took my (very good) Hobsons back round to the quieter left, where a cute twog (so an actually dog then) fussed around us, probably only cos we had snacks in our bag, and in the midst of all this mayhem, I'd failed to notice Martin the Owl had got himself a Carling.  Naughty owl!  Does have a tendency to go "off message" when he's had a few.  The day started as it had begun in Slaidburn, with Dad highlighting the GBG entry and reading the description.  "traditional country local in delightful village setting ..... warn and friendly welcome awaits you ..... on cold days cosy lounge heated with woodburner ...."  Hmmmm, well we wondered if perhaps, in Adlington / Waddington style, there might be another Red Lion elsewhere in Earby (Dad did even suggest there might be another Earby on a previous trip!) as despite not being a bad pub, the description just didn't fit! 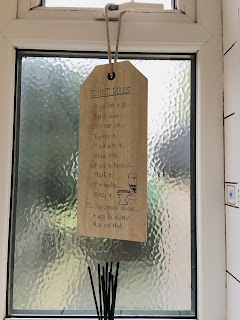 But overall, a superb day.  Those pubs, especially the first two at Slaidburn and Waddington will be remembered for quite some time.  Next up, I need to tell you what happened in West London the following weekend.  Not that I made any notes apart from "Lady Gaga ruins Andover" so more on that tomorrow!