BRAPA - Derbyshire III : The First Cutthorpe is the Steepest (Pt 1/2) 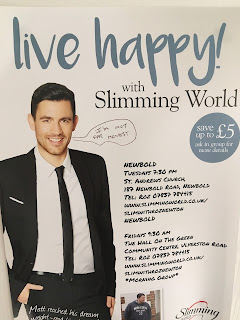 I'm progressing nicely with Derbyshire at the moment, leading me to wonder whether I could actually finish 'ticking' the county and its mainly wonderful GBG pubs before the 2020 edition drops through my letterbox in late Aug / early Sept.

Six more pubs today took me to 53, edging into 9th place ahead of Dorset (51) in the BRAPA league table.   It was an 'international break' for Hull City, so I persuaded Dad (well okay, he didn't need much persuasion, my company is obviously amazing) to join me on a 'car' day as I had a particularly tricky one on the agenda.


We started though in Cutthorpe, just west of Chesterfield which was rural enough (it'd have been a ten minute walk from the nearest bus stop at (Gary) Linacre Reservoir.  It might not be that high up in truth, but my blog title demands it.

Cue the first moment of confusion of the day, as Dad had thought the pub was opening at 11am, but was actually 11:30am.  Explains why when we pulled up into the car park at 10:57am, he was concerned there was no light on or signs of life.  And I'm thinking 'jeez Dad, they've got 33 mins, give them a chance!'

So we went for a little walk in the sunny but cold bracing air, where we said good morning to a lady hanging her washing up, who Dad described as a 'witch' but he meant it in a positive way. 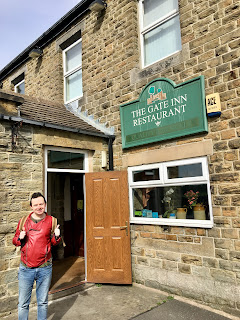 "You go in first with your happy positive demeanour" says Dad, thinking tactics, "you are more likely to get us served!" making out he's some kind of sour faced old trog which of course isn't true.    "Hiiii, you ARE open ain't ya?" I say to the barmaid, which sounded almost like a threat, and he admitted she was open early and had seen us lurking around outside and wondered what our beef was.  She was very much a people person, and to be honest, I'd rather someone was curious about what had brought me to their pub that someone who barely registers the presence of other human beings as happens in pubs in, say, bits of London.  For a first pulled pint of the day, the Chatsworth Gold was glorious quality, as good as anything all day, but I told Dad that as we were the only customers, he might have to exhibit some weird behaviours to give me something to write about in my blog!  For that's the problem, all you could do was sit in the fairly cosy bar area around a corner, relax and enjoy your drink, like what normal pub folk do.  Ugh.  At least Martin the Owl came out for an airing.  On the way out, we returned our glasses and I made a point of saying it had been a quality pint.  "She's marked you down as a CAMRA type!" says Dad.  Okay father, no need to be offensive. 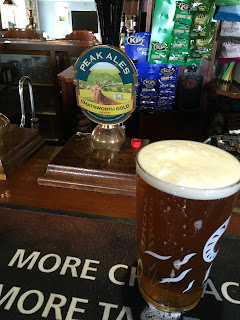 Our next pub wasn't far off, just north of Cheaterfield, home of the crooked spire and Luke Beckett's Jacobs Cream Cracker tin stuffed full of bank notes #NeverForgiveNeverForget and I think a new GBG entry.

It seemed far from 'new' as we arrived just before 12 noon, buoyed by our early opener in Cutthorpe, we pushed a few doors to see if we could get in early.  An overgrown garden and chipped paintwork and stuff, this was either going to be a mini-classic or a bit of a shithole.  Both perhaps? 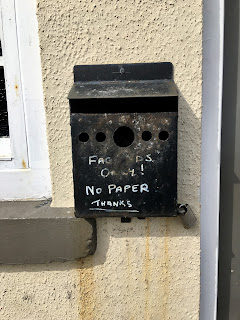 At a side door, we saw a local hovering around like a North Derbyshire moth.  "I'm glad we aren't the only ones waiting" I say with a smile, and he tells me that last week, he found two blokes from Glasgow waiting here for opening and he thought 'couldn't they find a nearer pub!'  "Perhaps they were visiting every pub in the Good Beer Guide?" I suggest and he replies "yes, that is EXACTLY what they were doing!"  Did he not think that is why two strangers like us might be here?  At that second, the door springs open, bang on 12 noon, and we are in.  The barman is a proper stoic old skool lad, "There you go duck" he says to Dad as we get our pints.  Sadly, my ale was too warm (and I'm not particularly fussed about it being majorly chilled!) , exactly the kind of 'first pulled through of the day'  I was glad we hadn't suffered in Cutthorpe.  Wonderful pub though, lovely soothing old fashioned lounge style, that kind of 'smoking ban never happened' feel to it.  And it wasn't long before a healthy throng of locals had joined our friend from outside at the bar.  If BRAPA was a drama and you were a casting director casting the perfect dog for this pub, you couldn't have done better than the huge breathless bulldog that bound in shortly after, dribbling from every orifice, I couldn't get a good pic for the table and watchful owners but trust me, he/she was a legend.  In conclusion, nice to see pubs like this getting their place in the GBG amidst the micros and kitchens.  North Derbyshire, keeping the pub scene real! 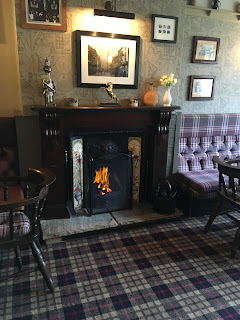 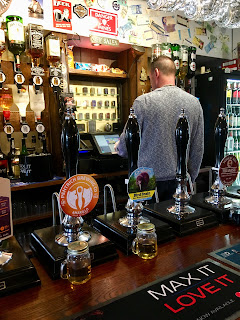 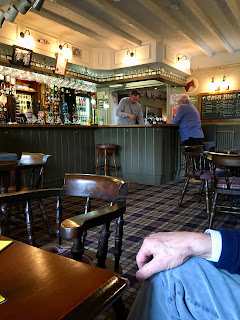 If everything seemed a bit too easy today (a nice linear route from pub to pub, early opening, time on our side), it was always likely BRAPA was going to do what it always does when you relax and let your guard down, and give you a good firm bite in the bottom.

For next on the agenda was Staveley, a place know to me and Dad from our early days of travelling by car to away Hull City matches down the M1.  We'd take one smell of the chemically air around this point, and Dad would say "Staveley!"  so that's what it means to me.  Reassuringly,  the smell was even stronger and more disgusting in the town itself as we parked up - it's a wonder the locals don't have six fingers on each hand.  Oh, hang on ......

But worse was to come.  "It doesn't look very open to me!" says Dad, as he mysteriously runs back round the corner towards the car in a manoeuvre I never questioned at the time.  I step towards the pub, but with shades of Gidea Park's micropub, the awful truth is revealed ...... 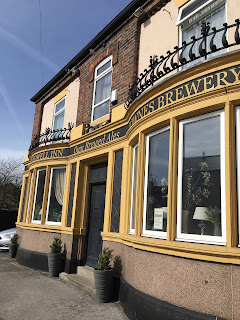 How can you be so close to the M1 but so utterly rural?  Yes, this was the one Derbyshire pub I just couldn't work out how to get to without the aid of a car!  And there were just too many mind bending features at this pub which I just mentally could never come to terms with....... 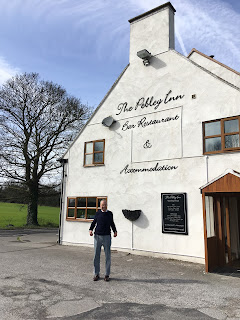 The pub font and talk of restaurant and accommodation marks this out as your typical rural dining venue, and I think that is how Dad saw it, but to me there seemed to be so much more going on.  I think I'm the first pub ticker to do this one, I can't think its been in the GBG before but I could be wrong, but that makes me feel an added pressure to do it justice, though having said that, I'd probably rate it the weakest of the six pubs we did today.  I ordered an ale called 'Fudge!' and the perky squashy faced barmaid tells me its an ale that has really divided opinion, but what I loved about her, she didn't say any of that "do you want a taster?" bullshit.  She'd heard me say 'pint',  I'd made my fudgey bed (so to speak) and now I had to lie in it (urrghh).  I saw what people meant, it smelt glorious but the fudge taste was a bit thin and lacking.  It was a bit like opening a new box of Quality Street at Christmas, only to find not one of your favourites within.  Just call me Somellier Si (Simellier?)  And before this, two pork chopped rural bar blockers (they looked like farmers from the Charles 'Turnip' Townshend era) had already growled in unintelligible tones that we'd be better looking at the blackboard than the pump clips.  Something I never agree with, I need to see the pumps to get a proper idea.   Despite impressive old clock and pool table, we had no alternative but to sit on low leather settees in a raised area with no beer mats, which lacked true pub integrity, a shame cos there were so many subtle nods to an older unspoiled rural pub hidden if you really squinted hard enough! 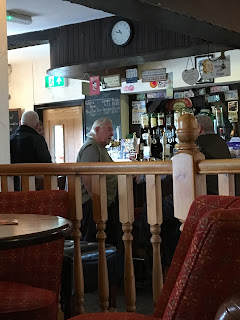 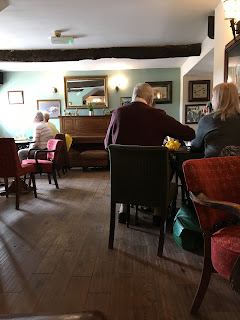 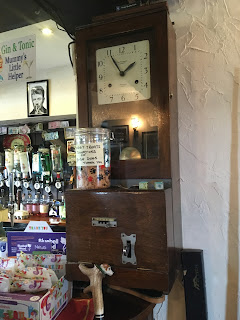 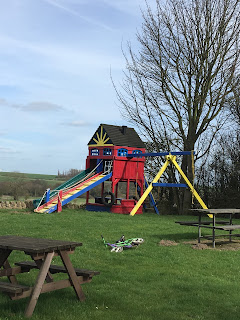 And with a slightly sinister scene of an abandoned twild bike visible from the pub car park, it was time to get back on the road for pub 4 which I'll tell you about next time.