It was Wednesday night in Norwich and Hull City had just lost 3-2* to the league leaders, no great disgrace, just a shame we can't defend as well as we can attack.  Some of our fans took solace in the fact it'd knocked L**ds off their perch, but that was no consolation to myself, Dad or Tom as trudged through the Norwich backstreets in search of post-match BRAPA refreshment.   Also, Goal Music.  Seriously, what kind of team in 2019 has Goal Music when they score?  Ugh!

We stayed east of the river, where Carrow Road is, and despite the relative closeness to ground, station and river, this one felt like a bit of a hidden gem, tucked away amongst the terraced houses down a series of streets named after women like Florence, Beatrice and Marion.

'Lovely Jubilee', as Del Boy once kinda said, for this was my pub of the night, even nicer than the White Lion and as Dad pointed out, the perfect post-match pub, offering as it did a low peaceful aftermatch thrum of yokels who knew in their heart of hearts that a home win had never been in doubt.  As famous a pub and ale city is Norwich is, I've often wondered if it quite warrants such a big allocation of GBG entries.  Venues like the Leopard, Plough, Vine, Cottage, Ribs of Beef and Wig & Pen (the second incarnation) have left me a little cold, when compared to things like this, the Alexandra, Murderers and Plasterers.  Still plenty to do, and most a bit off centre so the jury is still out.  I might even get to the famous Fat Cat one day!  It didn't feel at all like a 'coffee' pub, but that is what Dad wanted, so fair play to him for asking for it  (I thought he might get slapped in the face with a wet canary) and actually receiving one (coffee, not damp canary slap).  Friendly atmosphere, my Summer Lightning was on top form, and apart from the first two minutes when I removed my jacket to reveal my 'colours', and apparently (my back was turned)  received some funny looks akin to Jack Grealish walking into a Birmingham City stronghold, all was relaxed and well with the world. 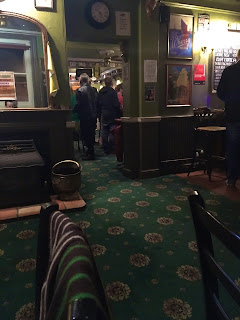 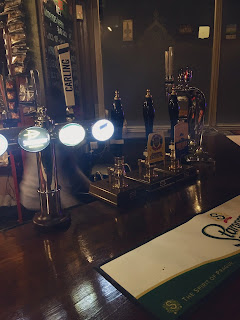 Thursday morning dawned a lot sunnier and calmer, and after a quick shower, breakfast scotch egg and cup of Nescafe, I checked my Twitter notifications to see a lady called Louisa from the Eastern Daily Press wanted to do a little BRAPA article so that was a nice boost!

But down to the proper business of pub ticking first, for we were on the 11:57am train back towards Peterborough, and I was determined to squeeze in two morning ticks.

Luckily, I'd spied a 10am opener which wasn't even a chain pub so I knocked on Dad's door 9:40am sharpish and we headed on down for 9:55am.  There were some people in the window 'setting up' and an Adnams Ghost Ship lorry doing a delivery ...... 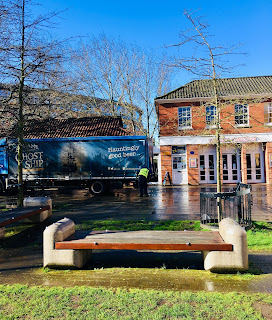 10:01am and Dad pushed the door and we were in!  In what we now call 'the Dorset Complex', we weren't even the first customers as this local nutcase had somehow got in and was blinking into the sun at us with his black coffee and blacker stout.  Although it couldn't have been much different from last night's Jubilee, it was glorious in a very different way.  I associate these artsy real ale bars with the North East, places like North Shields and Washington spring to mind, but this was an even better example of the 'type'.  Everything seemed to be done to an immaculate standard, quirky without being irritating, the Cityscape ceiling was a joy to behold, it was warm and comfortable which wasn't a given, and when the ales were pulled (I had a Cloudwater mild, great to see them back on the cask) a kind of series of wires and pulleys stretching up to the ceiling whirred into motion, which I think opened and closed a skulls mouth or something though we weren't really paying attention at that point!  Tom shambled in 5 minutes later for a restorative blackcurrant, time to assess last night's performance with a clear mind.  The Alpro soya milk had me wondering just how vegan the two barmaids were, who I felt could've been a bit smilier, but early morning and all that, probably used to working in such a great environment by now, I wish Yorkshire Bank had a cityscape ceiling, maybe Richard Branson can help change all that (appropriate as Virgin Money are quite big in Norwich, maybe I can get a work transfer down to Norfolk?!)  Sorry, I'm getting carried away now. 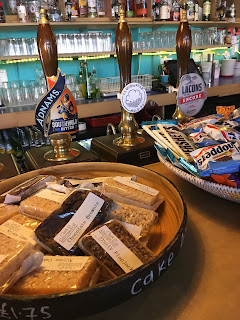 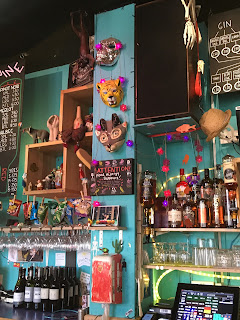 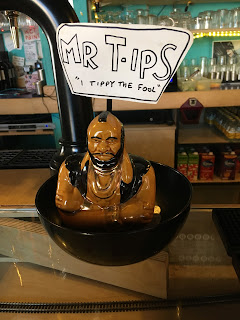 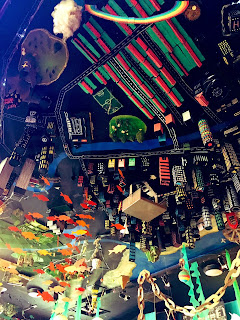 10:45am then, and we had to make hay as these farmery Norfolk types say if we were gonna be on course for another tick before the 11:57am train.

It seemed a better location for the station at the time, though not sure it was, back south in that Carrow Road style direction.  In fact, when I ticked off the Kings Head a few years back, our football friends Mark and Ben came here instead and weren't too impressed so expectations were low ......

But I'm not sure what Ben & Mark had been smoking for this was a third consecutive excellent pub, making it 4 really good ones out of 6 for the trip.  It was about 11:05am when we arrived, very much open, first customers in but a very personable young barman in this traditional bar boarded gem serves Dad a second coffee, Tom a second Blackcurrant and me a cracking pint of Greene King Mild, a rare find and a rare example of me getting excited to see a specific ale, making it two milds out of two for the morning. Also makes me wonder how their IPA can be so utterly dreadful!  Now, a pub dog has never won 'BRAPA Pub Pet of the Year' because they simple aren't 'cat' enough, but the one here was brilliant, and for once, seemed to like me!  Maybe a bit too much at one point, nestling into my crotch, which Dad said was not a photo he was willing to take with the Eastern Daily Press article forthcoming!  I guessed the cute creature was really after my two remaining scotch eggs (that's not a euphemism).  We sat in a sunny window seat, fairly silent focused on my ale as I was under instructions to drink at a pace which allowed us to leave between 11:30-11:35 for Dad was quite anxious about making the train back.  Another glorious pub, though I suspect quite busy on matchdays, perhaps the reason our friends didn't enjoy it as much as we did this morning. 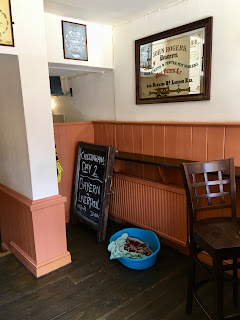 We made our train easily of course, I answered the questions for my article, and by the time I was back in York catching up on Neighbours and eating beans on toast with a glass of water (I know how to live), the article was published.  Hurrah!   Then it was off out to York's Crystal Palace to meet my friends for a glorious pint of OBB - phew, what a day.

Tom got equal billingin the article amusingly, but to be fair, as we approach the 5th year anniversary of BRAPA, he has been the one person who has supported me from the very start before even my own family got on board with the concept, so he deserves that recognition!  Well played Tom, well played Dad, nearly well played Hull City.  Goodnight Sooty.  Good night everybody.

I'd be back in Derbyshire on Saturday, which I was thoroughly looking forward to.