As soon as the football fixtures were published last June, one of the first things I did was marked a Wednesday night in Norwich as a 'two day off work MUST overnight stop'.

Not because I was desperate to watch Hull City get a good pasting off a side who'd probably finish above us (I predicted we'd finish 19th I think) but I knew that despite this being about my millionth trip to Carrow Road, I still had a ridiculous number of Good Beer Guide pubs to get ticked off here.

Storm Gareth (lame name for a storm, what's it gonna do, breathe gently in your neck and give you a parking ticket?) meant an 80 mph speed restriction was in place on the East Coast mainline and we missed our connection at Peterborough as a result of actually going about 10mph and stopping in every station for far too long, grrrrr. *Glitch

No announcements, no guidance, it was left to the Sherlockian mind of Bernard "Daddy BRAPA" Everitt to get us to Ely for a swift change, which we only made because a lucky ginger toddler smiled at us, causing the connecting train to be just delayed long enough for us to run under the subway to make it.  And who should be stood on same platform but Tom Irvin!  I love it when a plan comes together, we'd deserved that luck.

After a swift Premier Inn check-in, we were straight off to hit the pre-match pubs in the swirling rush hour wind.  You cannot deny Norwich is a beautiful city, so many old churches, greens and cobbles.  People perhaps a bit smugger than your average UK citizen, but I guess that comes with the knowledge of living in such a nice place, and beats the intense self-loathing vibe that Ipswichians exude from every dark orifice. #CrowdPleasingComment

The timing of my visit was especially apt, I'm reading a book called 'Tombland' where a hunchback dude has gone to Norwich to solve a vague Boleyn murder (she was sticking faced down in a ditch with her fanny in the air) at the behest of the future Queen Elizabeth I.

Anyway, stop rabbiting on Si, I hear you say, I'm here to read about pubs.  Here's our first of SIX pubs we managed either pre or post match ......

Our furthest point from the ground, it is the measure of a rather special pub to walk into a pretty tight main bar, be confronted by mini-twog and a twild called Jackson yapping and gargling, have tiny flies swirling around, and still find it to be a pretty classic pub experience.  Barmaid made a big difference, a super friendly host radiating charm and the mid afternoon hum of old blokes at the bar counteracted the more negative elements.  A low beamed roof and a probably not genuine old inn sign above the bar made for it all feel quite atmospheric, and Milton ales, of course!  Pint glasses were lined, you don't see that too often either.  Tom's blackcurrant was perhaps the most day-glo pint of blackcurrant I've ever seen on a BRAPA outing, he can perhaps confirm this.  In Norwich, you will find E numbers banned everywhere but here in the UK, apart from East Glasgow of course.  And that is a BRAPA fact.  Not a real fact, just a BRAPA one.   The pub actually felt more cider than ale oriented, it had more on anyway.  Things improved when a  much better lolloping pub dog called 'Dotty' replaced the yappy twog, I finally managed to squash the mini fly in the palm of my hand,  and pub snacks were delightfully basic, something I'd only truly appreciate as the evening progressed.   A great starter pub.

Now, it was time to put my faith in Google Maps to direct us to pub two cos I was in a part of the city where I totally lost my bearings, though it did have a great landmark, Toys R Us:


The next pub had a very pretty frontage, great plaster work though I was immediately getting the sense of something a little bit more upmarket ...... 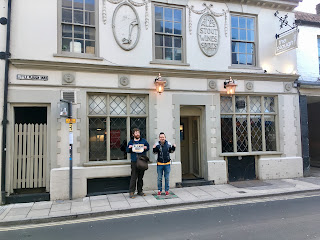 And so it proved, though a really friendly welcome here from a young bloke with a top knot / man bun, as we squinted desperately through the dimly lit interior to try and see what the Grain Brewery offerings were, but their pump clips were all a drab woody brown colour so I ended up getting 'Stout' cos it was the only word I could read!  Dad had to ask him for a full run down.  Worse was to come for Tom, no cordials in here.  Noooooo.  "I can make you up a freshly squeezed apple juice" he says, indicating a chopping board and decapitated sad apple behind him.  Yes, it was that kind of place, don't look for a beermat here because you won't one.  The ale was good, and we sat at a table which had a little game on it, as they all did.  We had a dice game, I didn't know the rules so I made them up as we went along.  Two old blokes sat near us, proper pubmen, but they had the voices
of 20 year old surfers which was quite disconcerting.  But this pub will forever be known to us as the "candle" pub.  We had three of those little tea lights on our table.  Tom (because he's wired a bit strange) decided to extinguish two on flimsy health & safety grounds despite Dad telling him to behave himself.  Poor barmaid comes over, notices they are out, and relights them (not helpful timing as me and Dad were trying to smuggle cheese n onion rolls under the table, as is the common urge in these posher pubs).   One later went out again, Tom pleaded his innocence this time, but she was back over, looking confused.  "I don't know WHY that keeps happening" I say, to break the tension.  "Might be a faulty one....." she claims (faulty tealight??), and goes to get a 'new one from out the back' as Tom looks on sheepishly..  It won't win any anecdote of the year stories that, but definitely worth telling the grandkids if you're on a long car journey around the Wash.

As we edged slightly closer back towards Carrow Road, it was time for pub number three ...... 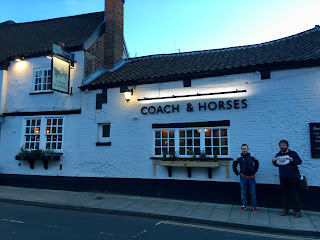 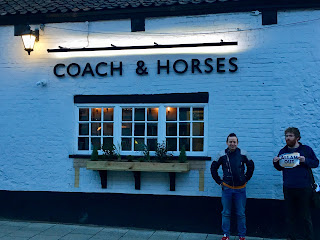 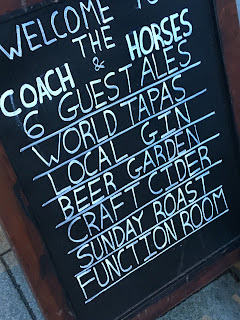 Not to be confused with the other GBG listed Coach & Horses a lot nearer the football ground which I've actually been in three times, this historic central town version was probably caught somewhere between the previous two in terms of 'pubbiness', not quite White Lion standards, but a brief exploration of the pub saw some really nice areas of bench seating, etched screens, and crooked beams.  Yet, in the part we sat on this quite busy evening, we were hampered as a blousey bunch of ladies (who I dubbed  'Loose Women' at the time) had an extravagant multi-course banquet laid on which was all very impressive, but did nothing for my interpretation of the pub hubbub!  My ale didn't help either, I ordered something dark from a local brewery called Winter's called Geniuss and it was quite dreadful, like drinking watery peat.  I don't blame the pub, it was kept fine, just not to my taste, Dad had a pale from same brewery that I later had and was gorgeous so just one of those things!   Not the first time I've come to Norwich and not been impressed by local brews actually.  "I'm hosting a party on 15th November and you will all receive an invite in due course!" declared one of the Loose Women, which was met with exciting whoops and hollers.  Dad reported they were discussing the original 'Itsy Bitsy Teeny Weeny Yellow Polka Dot Bikini', occasionally quoting lyrics.  I prefer the Timmy Mallet version of course (I'm the Pinky Punky of my day) but how did I let this pass me by?  Anyway, the LW amazing feast was too much for Dad, who made the inspired decision to order us all cheesy chips and an extra pint, which was a great move, cos moving to a 4th pub before kick off may have been pushing it.  Decent pub this one. 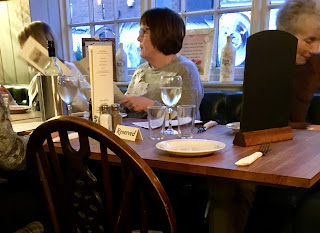 So there we go.  Time to get to the football.  Could Hull City do the impossible and win?  Could we get a post match pub in?  Would it be any good?   And what of tomorrow morning before the 11:57am train back to York?  Could we REALLY squeeze two more ticks in?