It was a brave new start as 'Cambridgeshire became Derbyshire' (as the Spice Girls so nearly once sang) and it was time to get cracking on a new county.

I say 'new' county as though I'd never visited a 2019 Good Beer Guide pub in Derbyshire before.  Not true!  I'd done all of Derby apart from 3, all of Chesterfield except 1, and a host of other places mainly in the north including Glossop, Hundall and Hope, totalling 35 pubs, so it was actually in 19th place in the BRAPA league table.  And it was only going to rocket up the league between now and September!


Armed with my amazing Derbyshire Wayfarer ticket purchased in Sheffield (you have to write them a letter and post it off otherwise like in the old days!) I was all set to get to Derby and catch the connecting hourly bus to Ashbourne, my 'key' pub of the day as it begins with an 'A' I was going to do third!  The ABC murderer has nothing on me.

Sadly, the train broke down in Sheffield, and by the time I'd hopped across the platform for the replacement, I had even more sadly realised I'd miss the bus connection.  I blame the short bald weirdo who'd tempted fate by walking up and down the platform saying "London is closed .... too many cockneys" and then laughing.  I avoided his gaze.

A quick rethink was required, and an early opener in central Derby which I planned to do last now made sense to do first.  Can't be hanging around 11am in a town like Derby pint-less, can we?

Considering how many people bang on about the amazing pub scene in Derby, it seems unusual it has two Wetherspoons in the GBG (York's wouldn't stand a chance) but the reason is pure and simple (Hear'say), Derby's duo are both excellent.  The Babington, I did 13 years ago, my first Derby pub in fact, often gets talked about as one the top 'Spoons in the UK, but I'd not heard of this one.  I overtook an overweight family looking for a table number before they waddled to the bar, yet they STILL got served first cos I stood at the nice central island bar behind a pile of glasses (FAIL), cos that is where the ales are.  I put on my sad pathetic face and a nice purple haired lass said "won't be a minute sweetie".  Ahhh, can I keep her?  Swap her for Martin the Owl?  So I went to choose an ale and blow me down, Draught Bass!  Well, you know you are in Derbys/Staffs when this happens in your 'Spoons.  Really good too after my usual initial "uh oh, am I gonna enjoy this?" sip.  'Twas like the Cadbury Caramel Bunny's voice in a glass.  "Grandest!  Tallest!  The First!" gushed the GBG about the place, and I perched at a posing table for one amidst a sea of Stone Island clad chunky 18-21 year olds and Dad's with rolls of head fat nestled in between neck and tattooed baldness.  The type who'd goad away fans and then run away when it got stabby.  I assumed Derby County must be at home, perhaps a lunchtime kick off, but in fact they were away to Aston Villa.  One group of lads got a round of breakfasts, three jugs of Woo Woo, Cheeky Vimto or the like, and then some sausage baps for pudding.  A fine effort.  They eyeballed me a bit so I buried my head in the GBG and supped up, not long til that bus to Ashbourne!


By the time the bus got to Ashbourne, it was a couple of minutes to noon so rather than get out to the 'rural duo' first as planned, I decided to do the Ashbourne pub now instead.  After all, I needed to pee!

It seemed a pretty little market town, though very much out on a limb, really felt like it should've had a railway station of some description, but am pretty sure it didn't. 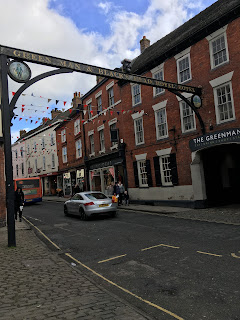 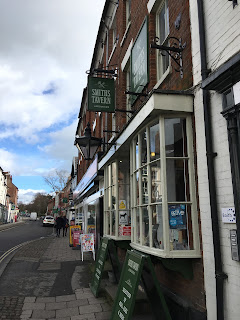 Didn't wish to be impatient, so I jigged around outside until 11:59am became 12:01pm, and then I went to push the door.  Only a small half of it came open, but I've been doing my tummy exercises recently, so I was able to squeeze my way in (no one in Derby's Standing Order would've stood a chance).  I noticed the landlord and landlady stood behind the bar looking a bit wide-eyed at my arrival, I was close to saying "ooh sorry, are you open yet?" but still scarred by Sixpenny Handley, my evil brain was telling me "fuck it, it is 12:01pm, this is my right!" so I launched into my order of a local dry Irish stout, the one non-Martsons ale I think was on.  Then, the landlord went towards the door and 'properly opened' so yes, I had kind of broken in.  "Just £3.90 darling" says the nice landlady.  "JUST?"  Is this rural Derbys or flippin' Hammersmith?  This was a gorgeous pub, my second favourite today, steps took you up to really atmospheric middle room with church pews where I sat, and a back sort of games room with dartboard and wonky floor, which I almost moved to.  My Mum and Dad had come here on my GBG recommendation a couple of years back, enjoyed it, and told me to look out for a dog on an old chair!  I barely saw another soul, never mind the dog, a bewildered oldster came in with his wife to pee (no, they didn't pee together) and got a Stowford Press as a token gesture like so many pissy old blokes do.  Nothing much happened til I was putting my jacket on to leave, and "WOOF WOOF WOOF!" from behind the door next to me.  "Lay back down Milo!" shouts the landlady, so that was the famous pub dog?!  "That's my cue to go" I tell her, and it was off to pub three ....... 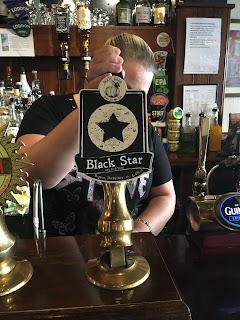 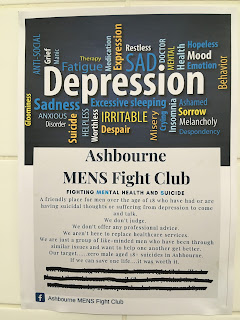 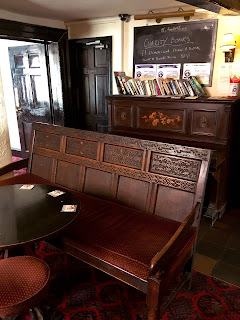 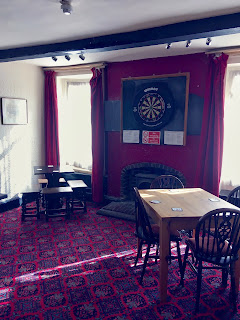 I'd enjoyed that, but now the hard work really began as my next two pubs were in rural 'no train, no bus' areas north of the town.

Luckily, I'd seen this path called the Tissington Trail which would take me straight to Thorpe, the destination of the further of the two pubs. 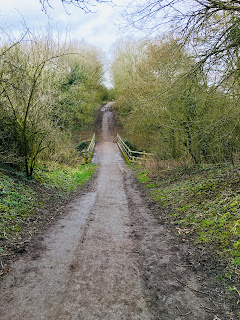 'Twas a nice walk but I had to rename it the Tossington Trail because even though it is British etiquette to make awkward eye contact and murmur "ow do" at anyone you pass on a rural walk such as this.  But East Midlands folk as we've witnessed before, are, outside of pubs where they are salt of the earth, a stand offish, wary, insular bunch on occasion, so my efforts repeatedly fell flat.

I power walked it, under an hour, bit over 3 miles, and I got some encouragement the pub wasn't far ..... 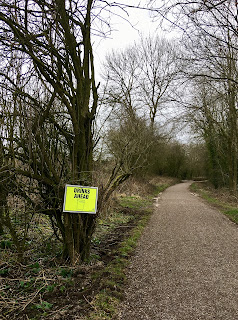 Finally, the pub came into view looking all stony, isolated and villagey, I had high hopes...... 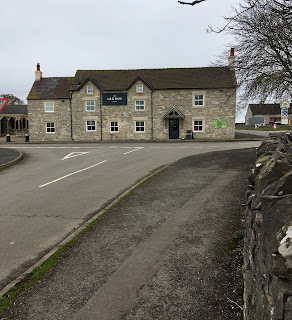 Really attentive smiley young bar lads on arrival and a welcoming fire to the right couldn't really distract from the fact I'd walked into a pretty sterile modern upmarket foodery, the strange handled jugs, naked flames and distinct lack of beermats pretty much told its own story.  I did myself no favours by trying to sit 'between rooms' so as not to be in peak dining area.  Seemed a good idea at the time, but the second bar and narrow walk way meant I was practically pinned against the wall for the duration, breathing in fumes of wet dogs, who came in looking terrified as the furry throes on the window seats looked like their fellow canines who had been skinned alive!   It would've been sensible of me to sit in the outdoor area, but it was too late now.  Nearer the loos, buggies and twilds dominated, a polite young father with a beard was having a cheeky spliff in the gents to calm his nerves before he had to get back to reality.  Clientele seemed to be a 50/50 split of a young attractive lycra clad biking set, and muddy arsed over 60's on a never ending ramble, in more ways than one.  It got even busier as I neared the end of my probably fine pint (hard to judge ale quality in such circs) as a group of loud blousey women came in, screaming about burgers and making general exhibitions of themselves.  "I want nachos but it won't be filling enough" whined one.  "Right, I've decided" declared the ring leader .... "I'll have a basic with cheese!"   Cheeseburger, as they are also known.


I was glad to leave, I won't lie.  My next pub was back towards Ashbourne, but not really on the Tissington Trail, so I had a bit to do still.  More on that one tomorrow.