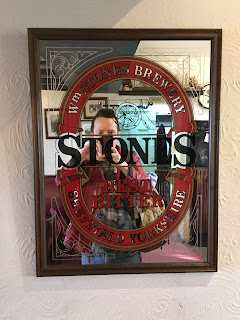 As we pulled up at our fourth of six pubs on Saturday past, the group of dangerous looking blokes smoking in the car park under the pub sign provoked a rare BRAPA reaction in both myself and Dad, "there is no way we're posing for an outdoor photo with that lot stood there!"   Yes, that is how scary they seemed.

I nudged past them, saying a nervous 'yoo-hoo duck', and I think they all had scars on their cheeks (not bum cheeks) in the true 'Scar-cliffe' tradition, though it could be possible my mind is over dramatising our peril by this point!  Given a choice of two rooms, I'd normally take the left side door, but we were intrigued to see the right one called the 'General Room' and sure enough, it appeared to be the 'right' decision as we were greeted by a roaring fire and very much a cosy drinkers den.  Seemed the dangerous blokes were with us, as abandoned pork pies, crisps, pints and pork scratchings sat on the bar - the closest to the Mary Celeste you'll find in North Derbyshire.  We did briefly consider these pub snacks might complimentary 'on the bar' snacks, I nearly cut myself a slice of pork pie which would've caused the biggest international pub snack incident since I nearly stole Spanish ladies olives in the Victoria, Paddington.  What North Derbys really needed, as on that day, was a 'Judgey Jesus' to keep a close eye on me.  We sat at the back of the room near the fire, happily enjoying our pints, and I can tell you now this was rapidly becoming my favourite pub of the day, even when the blokes turned with the ultra-strong local accents.  Great pint of Venus & Mars, and Dad absolutely loved his Olde Trip which he'd amazingly never had before, we even had a good chat about the price of dark wood furniture over the ages - classic BRAPA! 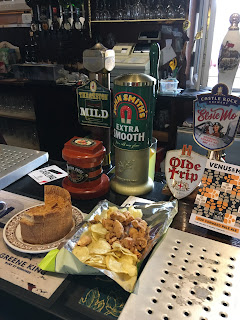 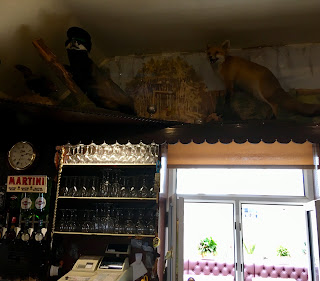 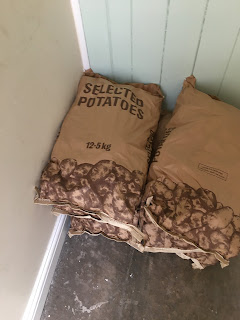 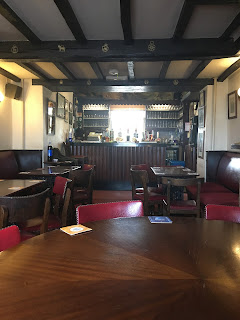 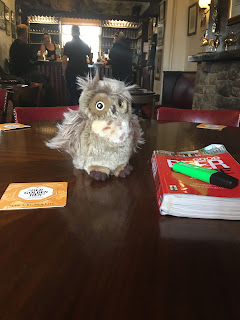 Two pubs to go but no point rushing, as we had to wait for both to open.

Those of you who read part 1 will know Staveley's pub had suddenly become a 4pm opener on 'police advice' when they'd heard I was in the vicinity, but we wouldn't be denied, and loads of credit to Dad for being happy to take a diversion to get back there on this same day.

After sitting in the car staking it out, we saw the door ping open like a bra in a Carry On film a few minutes before 4pm, keeping up today's great record of pubs opening a bit earlier than billed.

The chemical smell of Staveley seemed stronger than ever.  Sellafield, Chernobyl and Fukishima have nothing on this part of the world.  Do the locals need protecting from the fallout?  Do they 'eck?  They just put on an extra string vest.

So, yes, funny to read the GBG entry claiming a 'fresh vitality' being brought to this pub by new owners amidst a reality of amending hours so a pub doesn't open til 4pm on a Saturday, which can't exactly mean business is booming.  Made me think of that GIF of the cartoon dog sat at his computer in a burning office, flames all around him, saying "everything is fine".  Not too dissimilar from the pub in Newbold this one, but perhaps a bit cleaner feeling, this was nevertheless a glorious old fashioned style pub with a great bar back with lamps, distinct areas, corridor and live music.  A shy, mousey but pleasant young barmaid (she kept scuttling off and hiding around corners and probably under floorboards) served us beers from the on-site Townes brewery - the GBG cynic in me says  'CAMRA will put in anything that brews its own stuff, no matter how it tastes' but these were truly excellent ales.   A couple of locals started to filter in as we sat up in the raised area, and as much as I wanted to hold a grudge over the opening times, the pub was simply too good and mellow to leave you feeling anything other than happily relaxed. 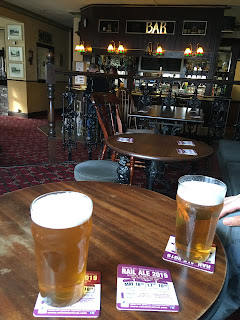 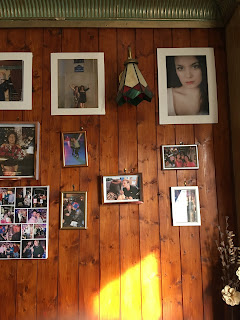 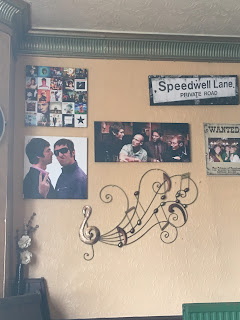 Our final pub was actually a 'club', and a 5pm opener at that.  The 5 minute early opening boost at Staveley allowed us to be parking in the village of Clowne by 16:50.

Over a mini grassy knoll, I located the 'Centre', which seemed to be twinned with a scheme to get locals married. 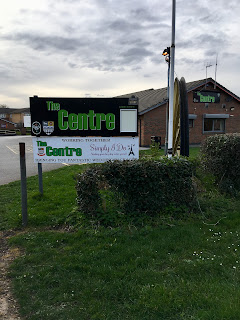 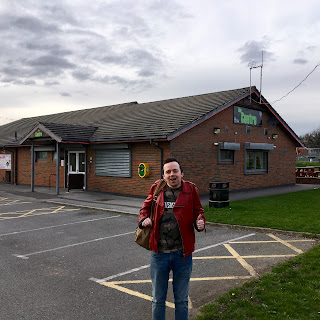 I wasn't actually feeling too bad, compared with last week in Belper, I'd learned my lesson re beer strength, and had stuck mainly to late 3's and early 4 percentages!  In keeping with our 'theme of the day', we strode in confidently and at 16:53, my pint of Clown Poison was being pulled.  Our personable barman told us this wasn't a house beer, just a happy coincidence!  He was pulling off a very Marouane Fellaini hairstyle, but there was no way this lovely bloke would elbow you in the face whilst supping a Leffe.  I'd been expecting this place to be the kind where you'd have to ring a buzzer to get in, and be greeted by three old blokes in flat caps juggling John Smith's Smooth, At the Races and loose leaf tobacco, but this airier comfortable take on the club worked just as well for us.  A nice place to be.  After that, our attention was drawn to Gibraltar v Ireland in the Euro qualifiers, which it must be said, must be one of the most painful and low quality matches I've seen televised in quite some time, Mick McCarthy looked wretched,  the location of the ground being the most exciting thing!


Well, we were done by 17:30, which had always been the aim, so we could get back for nice timely cottage pie with Mumma BRAPA - job done - more great Derbyshire progress.

Shame I won't be back in the county on a Saturday til early May, but the aim to get it all done by early Sept is still alive!


I've got a bit of man-flu at the moment but hoping to be well enough for a Fri trip somewhere.