BRAPA - Stung by the Bees? Bayswater and Ealing Please!

As we left Hammersmith in search of three more BRAPA required pubs in the sometimes unforgiving pub territory of West London, it was fair to say that Father and I didn't quite know where we were heading!  Okay, we knew we were on the Piccadilly line, but would it branch off south (Owl & Pussycat, Northfields) or north (Greystoke, North Ealing).  I like it when fate decides!

It did the latter, which was good news bladder wise because you could see the Greystoke as soon as you left the station, just across the road....... 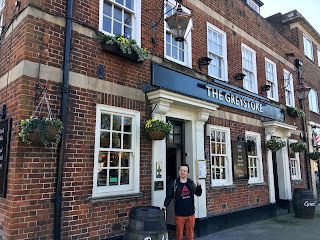 I wasn't expecting too much as I've been to Ealing pubs before and have found them all a bit 'upmarket boredom' and in some cases, identikit, when I think back to efforts like North Star and Ealing Park Tavern, which I'm convinced are actually the same place, just a trick of the time space continuum.  A coincidence both have been dumped from the 2019 GBG, I don't think so?!  But it was different here at the Greystoke, much better, sort of like one of those places, what do you call 'em?  "A PUB!"  Yes, that is the one.  The best quality beer of the day was enjoyed here, Copper Leaf by Wimbledon, and under £4 a pint, oh North Ealing, you are spoiling us!  Dad sat us strategically in a hidden booth of sorts, where we could smuggle our food with bar staff unlikely to see us.  Ok, so there was the odd reserved table, including one for a "Tom" at 4pm?  I know he'd be expecting us to be losing at half time, but it couldn't be could it?  Most of the focus here was on the football, as a gaggle of Tottingham 'Otspur fans (well two and a few casual onlookers) were praying their overrated chokers could win at Burnley.  Sad faces abound as Burnley score, I walked past them on way to the loo and my fake sad face was the least convincing expression I'd ever pulled, and looked like I was taking the mickey, which let's be fair, I was.  As I settled back into half a contraband corned beef roll, a strangulated cry of joy as 'Arry Kane had equalised. "Gerrin' 'Arry moi san" said a balding man in 80's sports jacket last worn by Ossie Ardiles, like he was watching his disabled grandson playing in the park.  I couldn't hide my disappointment next time I went to pee! As we got up to leave, near the end of the game, we glanced up at the screen and Craft Ashley Barnes of recent Bournemouth micropub fame scored the winner just as we opened the door.  Best exit from a pub in 2019, we did a jig right across the road back to the Tube Station.  I don't even like Burnley! 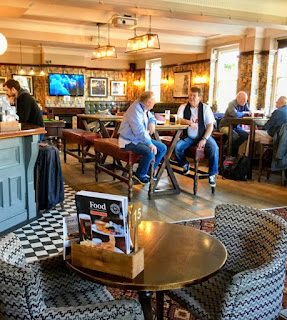 Next up were the first two listed pubs under West London in the GBG, W2 to be precise so a lot more central.  Again, there was a sense of "how had I not thought to do these before?" especially when I think of all those 'Project Calypso Nights' back in London in the Autumn.

Has there ever been a posher location for GBG ticking was the next question? 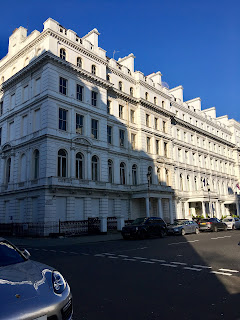 Okay, so this might not quite have been the next pub but I like the idea of one little old lady just rattling around in this building on her own.   The pub was just along the same road ...... 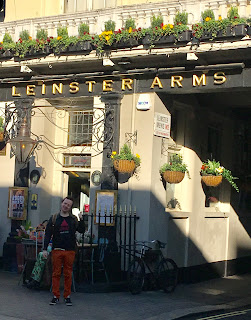 Oh yes, it was rather posh as our German barman and other staff were in smart uniforms as we walked in and I was concerned my stripey trousers were once more bringing BRAPA into (further) disrepute.  Luckily, I was saved by my Bass t-shirt.  "Ah, great t-shirt" he says.  Hang on, was this one of those Bass loving Twitter folk in a cunning disguise? Alas no, he was referring to the gleaming Bass mirror behind the bar and merely recognised the logo.  Buoyed by this interaction, Dad tried a subtle joke.  On a German.  Yes, I know.  The basis of this was the little yellow daffodil logo he was wearing, obviously some charity thing.  Dad knew that.  "So, you supporting Wales in the rugby today then?" said Dad, aware England v Wales was kicking off soon, as it was on a screen in this pub.  "Nein, it is a Marie Curie badge!" he replies, so Dad then has to explain about Wales and daffodils and of course so unsaid ancient German v English rivalry and it all kind of petered out semi-awkwardly as we trudged off to the back room.   Moment of the day?  For sure!   The back of the pub was standard London, but our football buddies must've been playing a joke on us.  Remember the 'Tom Reserved 4pm' table in last pub?  Now there was a Chrissy one!  And all that remained was to enjoy our fairly average pints of Tim Taylor Landlord as a less sexually motivated David Goodwillie waited for his dinner to arrive as the rugby took hold and all South Eastern faces turned towards their favourite sport, apart from the Boat Race. 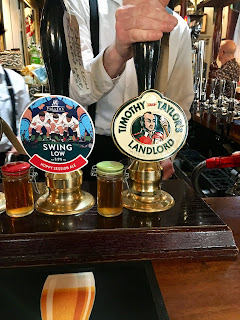 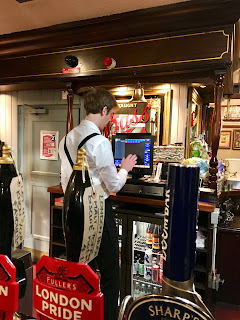 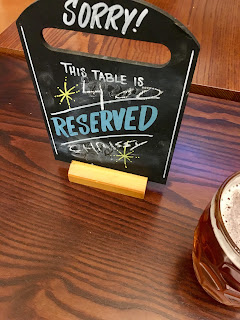 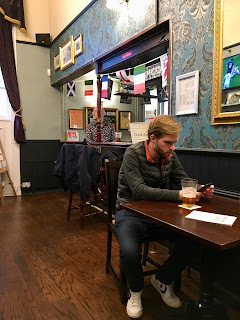 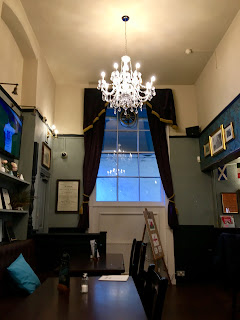 Time for another food break, and Dad had always wanted to visit Kensington Gardens, so we found a nice bench close to the Princess Diana Memorial Playground and tucked into our second round of Corned Beef and Fruity Sauce sandwiches.  It's what she would've wanted.   Our next pub saw us carry on through and across the front of the gardens ...... 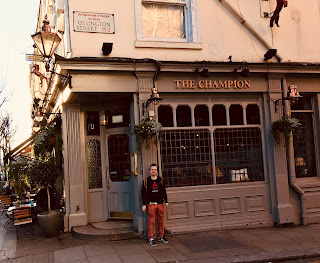 Why I always find myself in the south east on Twix Nations weekends I'll never know but it goes back to those early Bedfordshire days of 2014/15, when the Biggleswade massive lapped it up at every opportunity.  I bet the regulars in Wardlow Mires weren't even aware there was a game on this afternoon, but down here, it dominated every sinew of this probably quite attractive pub at any other time seeing as it is Grade II listed, 1838 built.  Had I done my research, I might've been able to hide in the sunken beer garden underneath the pub, alas we took our good Ghost Ship or whatever to the front of the pub where they'd opened the huge bay windows which allowed casual French tourists smoking those Gauloises to stick their heads through the window and make Franco-Welsh noises of encouragement just to try and put us out of our stride.  No idea what else happened, anyone got the remote cos Rochdale v Oldham was probably on the red button. 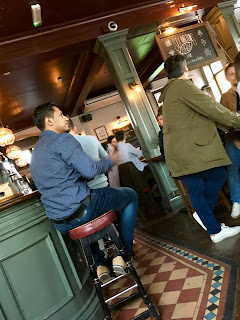 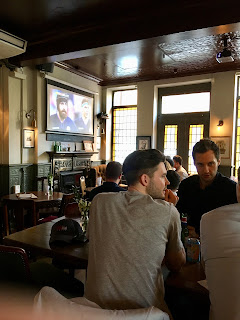 We'd done so well for time, Dad suggested I have a 'free hit' at something 'on the way back in'.  After a bit of GBG research, I came up with a pub listed under North London, the Sir Colin Campbell at Kilburn, as I worked out we could go Queensway to Bond Street, change onto the Jubilee line, straight up to Kilburn.  Alas, an incident meant we couldn't get through, even a diversionary route around Baker St left us hanging, so we gave it up as a bad job and as earlier agreed, went to meet Tom & Chris at a new Wetherspoons at St Pancras, pre-emptive surely?

We'd heard from Christine that Hull City had been "unlikely to come back to win" so when I checked the score and saw we'd lost 5-1, it kind of made sense.  "Stung by the Bees" our (hilarious) fans chanted, top self-deprecation in Hull, why it holds some of the finest folk on earth, probably.


After lots of confused walking around St Pancras in a circle, we finally found it ..... 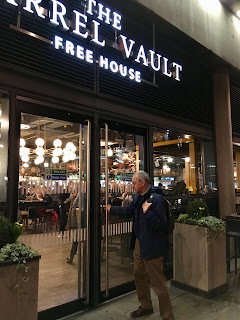 As Dad pushed those unpubby doors and got us inside, it was quite heaving but the young barman was an absolute star, totally on the ball, had us served within seconds, he deserves some kind of London 'Spoons barman award in my opinion.  The Scunthorpe themed beer was decent enough (prices though, eek!) but it wasn't a particularly nice arena to have a drink in, too chaotic, clinical and echoey.  A bloke on my Twitter said he didn't believe it was as good as the Parcel Yard.  Ouch, that's gotta hurt!  But he may've had a point.  The guys turned up and without wishing to get all the gory details from Griffin Park, we had a nice catch up on our respective days, before t'long train back to York. 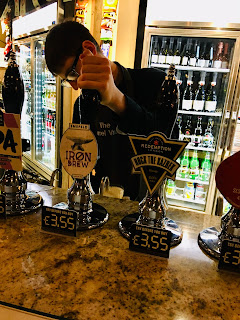 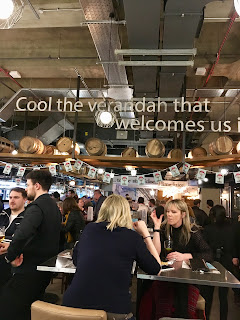 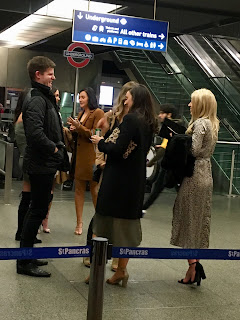 So there we go.  Six more pubs chalked off, and a pre-emptive.  Join me tomorrow, I've been making a concerted effort to catch up on my blogs so I can get back to Friday nights.  Part one of my official Derbyshire debut coming up tomorrow.