BRAPA - Taking Shelter in Belper on my Drunken Helter Skelter

"When you take the 'beer' out of Belper, what are you left with?  An L.P., that's what" as the famous phrase goes across Mid-Derbyshire (which I've probably just made up).

But before we get on to that, I was still in Matlock where I'd done the Thorn Tree (wowwww) and the MoCa (yehhh, okayyyy) but there was still one more to do, as I escaped the clutches of a friendly train driver brandishing a nit-comb, and I'm not even joking.

The rain was still coming down as I crossed the road for another modern style bar with a rubbish frontage and a vintage name that pre-dated the micropub boom by, oh, at least one year ...... 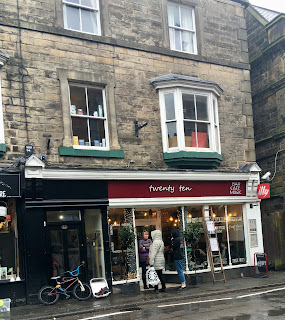 I squeezed past the three doorway ladies you can see above to allow me to get inside, where I was immediately confronted by a friendly bar blocker who seemed happy I'd selected the 4.9% local porter (why did I keep choosing stronger ales today?) so I explained I was craving one after the MoCa / Mocha Choc/Coffee mix up and that was it then, he reminded me to get my 10% CAMRA discount and then pulled me up stool so I could sit with him.  In doing so, his walking stick went crashing to the floor and I apologised and went to grab it.  "Don't mind him, he's a right nuisance!" he says.  ''He?'  Fancy humanising your own walking stick!' I thought to myself, and then wondered if Martin the Owl was crying on my kitchen window sill for not being included today.  Weird bunch these pubbers!  Well, you can't deny Phil was a font of all local pub knowledge, nice chap too, passing the ultimate BRAPA customer test of being allowed to highlight the GBG entry in green, which he did tentatively but accurately (8/10).  Under the circs, it was hard to gauge the bar as a whole, but had an eclectic mix of clientele, most noticeable when two ladies from a hen-do came over and asked him if he'd pose topless with them they needed to tick it off as part of their hen-do challenge.  Felt a bit sorry for them when he declined, as ticking things off a list of a challenge really speaks to me!  I hid behind him all the time this was going on.  They were sat in a raised area where a pool table and the gents were.  Had I been sat alone to observe, would I have liked it more or less than MoCa?  I suspect perhaps less, but very hard to sat when you are in the midst of the action! 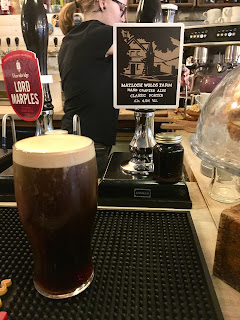 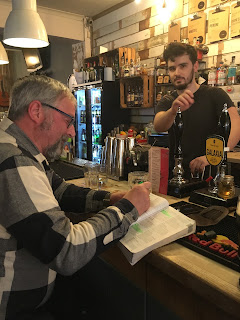 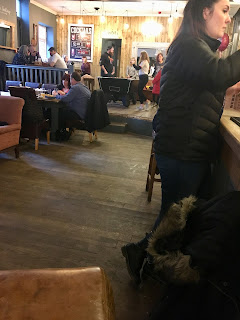 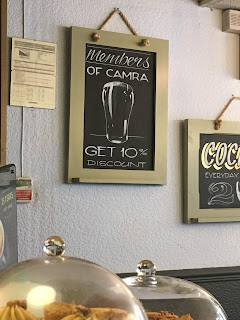 Time to hop on the train a few stops down to Belper.  I seriously needed some sustenance but I suspect that ship had sailed and it was too little too late as I was very unclear in mind as to exactly which station was which, and when I'd actually get to Belper.


Still, I remembered Phil's directions and realised both of the GBG 'pubs' were quite central.

It had actually been quite a late decision to do Belper today.  I'd flirted with Cromford and Birchover as options, but the weather made them a bit unappealing.  Hell, I'd even researched getting aboard the steam railway at Ecclesbourne Valley and doing Wirksworth and Duffield, but again, it just didn't seem right.  And with Belper being 'early alphabet' and having two ticks, it was a no brainer in the end.

Anyway, the first of two modern efforts came into view ....... 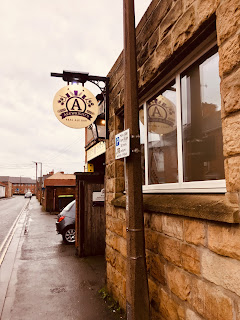 Okay, so my increasingly hazy state didn't help, at least my Brampton Terminus was my least strong pint of the day at 4.2% but that was one of few positives I took from the experience.  Beer was great, barmaid fine, but it was oh so dull.  Just a modern drinking space full of blokes on their own staring up at the football scores filtering through on Gillette Soccer Saturday.   One bloke did try and make conversation with a stranger, expressing surprise at a 4th minute sending off for Harry Maguire, but that was as animated as anything got.  I nursed my drink towards full time, safe in the knowledge Hull City were still 2-0 up, but the other team (can't even remember who, someone wholly unremarkable) unbeknownst to me must've pulled one back when I was in the bogs, for when it flashed up 2-2 with a late equaliser, it was my turn to be at my most animated and I knocked a Punk IPA beermat gently onto the floor and said 'oops'.  And that about summed things up! 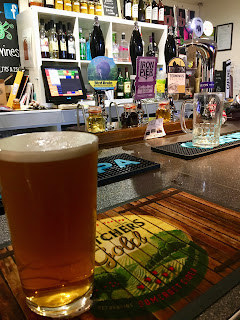 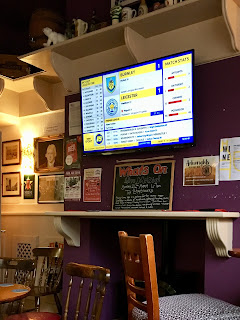 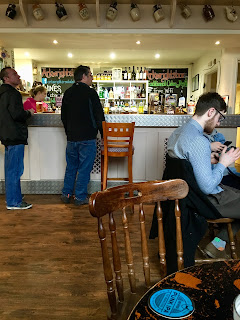 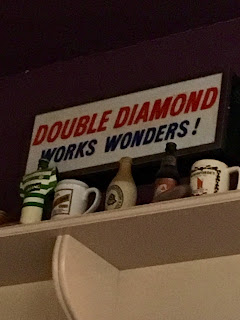 Back out into the rain, around a corner, time for my last pub then, and says a lot about my current slowness that I initially thought the below sign meant this pub opened at 12:10pm.

So, I calculated that this was the most drunk I'd been in a BRAPA pub since the Old Sun in St Neots, and that had an amusing twist at least when I found myself suddenly stood in the middle of the floor looking for the loos I'd visited 20 minutes before.  I walked in, immediately aware this place had more character than Arkwrights.  It felt a bit like a sixth form common room crossed with a vegan cafe in Hebden Bridge, but had a nice mural and some happy smiling patrons.  You got served through a hatch like you were buying a toffee crisp.  It is a simple micropub concept here - fail to open Mon - Wed, bang on 6 ales and 6 ciders on the Thursday, and watch them dwindle slowly towards Sunday evening and start again the following Thursday.  I ordered a Titanic Plum Porter.  It had to be done.  I took one glorious sip of this gloriously kept drink, and then I can't remember anything apart from hearing myself humming the 'Green, Green Grass of Home' (the superior Uke-Hunt cover version) on a train back towards Derby!  I have a vague memory of chatting to a friendly middle aged couple, she had dark hair, but this might've not happened.  Picture evidence shows there could be a couple fitting that description, a bloke in baggy trackie bottoms must've amused me, and I was quite taken with the corridor to the bogs.  But who can really say? 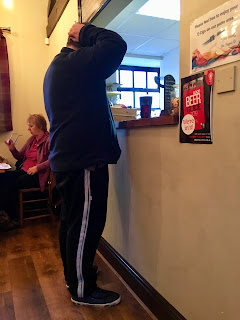 Note to self : you are not a young whippersnapper anymore Si, stick to the boring sessionable 3.8%ers if you are out for the long haul.   I changed at Derby but was clever enough to remember my Sheffield train went all the way through to York, and I was back for about 8:30pm which wasn't too bad. 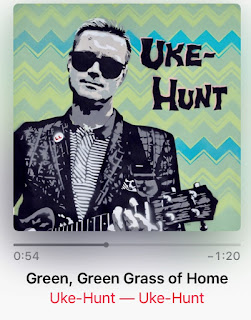 Not decided if I'm going for a rare Derbyshire Friday night tick yet, but football-wise, its a international weekend for top European clubs like Hull City, so Father BRAPA will be with me on Sat to help me get around some of the northerly Derbys pubs.