BRAPA's On The Way to Wembley, The Ales are Pretty Trembly

'Why are there so many Watford fans on this train?' I thought to myself on Sunday morning as I left the drab greyness of Bedford behind in search of joyful, colourful North London (well, I could hope!) for six of my remaining thirteen GBG ticks in this area.

Of course, it dawned on me it was FA Cup Semi Final day between Watford and Wolverhampton Wanderers.  What a day to decide to try and complete North West London, abysmal BRAPA planning.......

Watford.  You can't deny how well their poxy little football club have done this year.  Respect where it is due. My first away game was at Vicarage Road.  Dad bought me a mug (which only broke at Sunderland University after too much Tesco Mackem Cola, containing additives only found on Wearside) and one of those square 1980's programmes with the Solvite Snake on the back that you can't fit in your back pocket.  Tony Coton winked at me from the front cover in tight shorts.  They should have a 'special place in my heart'.  They don't.

As my brain was in pub mode, I thought about adapting football chants to suit the Watford GBG scene.  "What's it like to taste an ale?"  "HQ of CAMRA, you'll never sing that!"  "You're so shit, you're practically Cowdenbeath".  "Your pubs are embarrassing".  Hmmm, well perhaps they need a bit more work.  I kept them to myself for now!

At West Hampstead (where I noted one of my remaining ticks was just a 13 minute walk away), I eventually managed to leave the crowds behind.  Relief!  (for now at least).

The pub was on the Kilburn High Road, one of those roads you've heard of in music or fiction or something, and as leprechauns and Muslims jigged around in unison, I gingerly tried the pub door without trying to look like an alcoholic.  It was 12:02, the door didn't budge, tsk tsk, late opening!  12:05 and I was in, second customer as an old man had somehow beat me to it, as is so often the way. 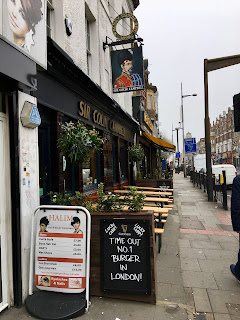 Barman stood there bleary eyed like a dude who thought "who's bright idea was it to open this early on a Sunday?" as I chose from the three ales, all from Yorkshire, opting for something hazy from Kirkstall that immediately was turned around.  Uh oh,  but turned out it was supposed to be like this, you never know in this day and age do you?  It took him ages to locate a till with 50p in to give me change from a fiver.  Why couldn't I have just paid by card like a normal Londoner?  It wasn't a bad pub, despite the flowers on each table, and 'best burger in London' claims which probably impresses visitors from Altrincham.  Reggae music boomed out which can't have been good for our host's hangover, but it soon morphed effortlessly into 'Pass the Dutchie'.  Finally, other customers!  A hubbie and wife combo, he went to get drinks, and despite having the whole pub to aim at, she sat on the tight bench right next to my thigh. '  I looked at her like 'No, I'm not a swinger' and they moved.


Back on the tube, it was time to taste Wolverhampton Wanderers fans for the first time.  A group of five got on with a tray of chips, and I soon suspected they were our Wolves equivalents, as one young lad started banging on the ceiling and chanting unintelligible shite about Jiminez, Jota and probably Roger Johnson.  The older bloke told him to sit down, behave and eat a chip.  It was such a Tom v Dad exchange, it made me smile.

After all, the equivalent FA Cup Semi Final 5 years ago saw us down here to see Hull City beat Sheffield United 5-3 in a mini-classic, so I could afford a bored 'been there, seen it, done it' arrogance normally reserved by Arsenal fans.

Yes, I was a bit edgy as my next pub was even closer to Wembley, it was a Wetherspoons, and sure enough, my fears seemed justified ........ 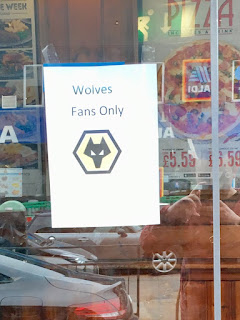 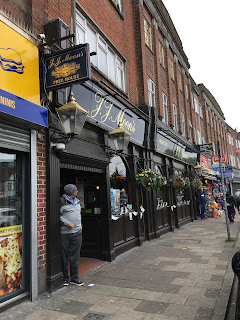 Not that I was going to let the above sign crap on my BRAP.  And as Dad would later observe "the sign doesn't really mean 'Wolves fans only', it means 'No Watford fans'".  Profound.  Nonetheless, a bouncer who'd situated himself 'twixt door and bar eyed me up and down suspiciously, so I looked him straight in the eye and smiled.  I almost ordered an ale called Bluenose but I hesitated.  What if this was a ploy?  If Birmingham City are big Wolves rivals, ordering this might seem suspicious, and you might get ejected for not being Wolves enough!  But Tom Irvin has since told me Brum and Wolves aren't really rivals, and it is more Villa and West Brom who are hated.  So that theory was out of the window, and in all the mayhem of making myself look more conspicuous by using a 50p off 'Spoons voucher, I dropped all my change and formerly evil bouncer ran over to pick it up for me.  Lovely chap!  In the bogs, a Mark Lawrenson lookalike asked if I was off to the game, I immediately crumbled and confessed my BRAPA sins, but he just looked depressed and walk off.  Maybe it really was Lawro? A group of Wolves fans by the entrance started chanting, then the group behind me joined in, so I tried to look like I was thoroughly enjoying their collective voice, and I swear down I'm telling the truth, as I zoomed in a bit to get a long distance photo, a young lady walks into shot.    AND she had more of an element of Angry Babe (I mean 'Angry individual' #WokeSi2019) from Whitefield, Greater Manchester fame, a couple of years back.  See below.  25 mins was FINALLY up, so it was time to look confident, fight my way through the throng, say goodbye in a West Midlands accent, I was sure Wolves would win the match at this stage.

Time to jump back aboard the tube and get out to my furthest point, a place called Ruislip (pronounced Rye-Slip, not Ruiz Lip) where I figured I'd escape the football contingent.

I DID see a few bewildered ageing Wolves couples walking the streets, probably looking for a fresh carcass to devour or something, but it was a lot calmer and more 'Londonified' as I approached by third pub of the day, which had all the hallmarks of a pretty standard 'bar'.

It doesn't describe this as a micropub in the Good Beer Guide, but it'd be hard to argue otherwise.  The highlight was in the first couple of minutes.  Hampered by a gaggle of sweaty elderly male bar blockers who had 'ignorance' tattooed across their foreheads and weren't moving for this pipsqueak, the barman not only brought my drink round to me (instead of passing it over with potential for spillage), he also did the same with my change which was a nice touch, and I am grasping for positives here I'll admit, but both main male beardo staff members were a class act.  The seating with tight benches, filled with far too many scatter cushions, and each small table had a complimentary bottle of water with glasses at it, a definite tick on the 'London Pub Bingo Card'.  Drama in the loo.  It was a 'Gents' but I thought it was a mutli-urinal/trough thing as I can't see around corners.  So I was already in by the time I was in and pissing, but one of the ignorant bar blockers, we'll call him 'Twhat' cos he was a twat in a hat, shouts "I'LL CLOSE THE DOOR FOR YA SHALL I?" so he did, I locked it, and I apologised on way out, but he just glared at me.  Anyway, upshot of it was he was gone for a good 10 mins so he must've had a poo, and I know sometimes I feel irrationally irritable before a poo, so perhaps I should forgive him.  As I finished my very nice pint of 'Park Sylvan', I finally thought a customer was smiling at me.  It was 'Fake Christine Taylor'.  But then I realised she was smiling at the craft can fridge next to me, made a bee-line for it, spending ages in there stocking up on 11.5% beers, thought the poor lady was going to get hypothermia!    And that summed the whole thing up.


Well, I thoroughly enjoyed writing that one up.  Been feeling a bit stale re BRAPA since the 5th anniversary 'celebrations so nice to get some impetus back!  Join me for the other three pubs tomorrow or Wed, plenty more amusing tales from North London.