Friday 5th April 2019 marked the official 5th year anniversary of BRAPA, and I was back in the county "where it all began", so a special place in my heart despite its faults, for a long weekend of pub ticking (with a boring twist .......)

Despite having been January 2016 since my last visit to the county, there were only SIXTEEN pubs I hadn't done, suggesting the "churn" (technical term) wasn't so great in these parts, and that just suits BRAPA fine!  After all, somewhere like Bucks, North Yorks or Greater Manchester, I lose over 16 usually in one year alone.

What's more, 3 of these 16 were off limits as they are situated in lovely Luton, and with Hull City very likely to play them next season, I could hear the voice of Tom Irvin in my head (second sign of madness after looking for ginger hairs on the palms of your hands) telling me "think strategically, Si".

As I had to wait til 3pm to check in, I had to lug my bags around with me for the first two pubs.  Flitwick was on the train line up from St Pancras to Bedford, had an 11:30am opener, so a no brainer. 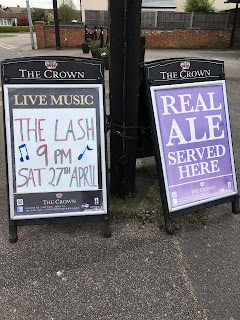 As plates of sandwiches sat in one corner and the busy landlord moved chairs and tables about, he explains he's feeling the pressure as they have 70 plus people in at 2pm, for a wake after the sad death of a local lady in her 50's.  But she'd not allowed anyone to wear black, hence his rather snazzy shirt, and for once, my red leather jacket seemed in keeping with the situation.  I was also greeted by a very shaky dog, who looked on its last legs too and was soon asleep on the floor next to me.  I ordered a pint of Old Mill, from Snaith, just south of York.  A brewery I know well, even been to a few of their pubs, not least the occasionally superb, usually frustrating Victoria just outside York centre.  Testament to this pub that this was the best quality Old Mill I'd ever tasted!  Despite his many pre-wake tasks, he still found time to chat (risking the wrath of his wife), a great bloke, and told me how hard they'd worked to earn their place in the GBG, great to hear and better than the oft heard "oh, we're in that book are we (yawn)?" comment I sometimes find.  Always in crap pubs.  Here, he told me how they'd sought advice from pubs like the Albion in Ampthill (remember, my FIRST tick 5 years ago today) on how to get in.  He even alluded to them sometimes having TOO MANY ales on, making the quality not always so great.  Top man, and enjoyed the perfect kind of symmetry that tied BRAPA together 'then' and 'now'.  As the dog wheezed gently and two old ladies came in to admire a bouquet of flowers, I said farewell and good luck for this aft, and he got the Paul Hollywood-esque 'BRAPA handshake' which probably didn't make his day but should've(!) 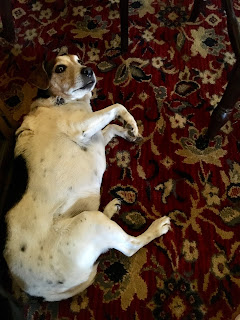 I had to get myself into Bedford for the next bus out, and three things I'd forgotten about it from 2014-16.  Firstly, how mutant-like all its inhabitants are.  Secondly, how bloody expensive the buses are around here.  Mr Grant Palmer must be sitting on a pot of gold!  And thirdly, how relieved I was they'd finally got their shit together, completed the refurbishment, and now, you don't say, have to walk a mile across town to find temporary Stop R or something.

My next bus was actually a coach, terrifying, he wanted me to put my luggage in a hold all under the bus.  No chance mate, I'm only off the Great Barford.  And where the hell were the bells to press to get off?  I finally located them, above my head!  Novel concept.

It was about a mile walk from the crossroads to the pub, situated just over a bridge by a river.

'Never trust a pub near water' could be a BRAPA motto for the future, whether we are talking sea, river or canal, I often find them dubious establishments.  In truth, for once, it had little to do with the fact it was primarily a dining pub, for we've seen examples (Plough in Bolnhurst, Fox in North Luffenham etc) down the years that are unashamedly posh dining establishments but winning service, ale and the like means you've gotta doff your cap to them, even though obviously I wouldn't CHOOSE one of these over a divey Holt's pub in outer Manchester, but then again, when did pub ticking ever give you a CHOICE?!  The smell of lunchtime fish being sucked up by puckered elderly posho mouths greeted me on arrival.  The service was limp, in fact a lady asked Malnourished Christian Eriksen (MCE) to recommend her 'half a local bitter' and after he looked helplessly around him for a teammate, he was glad when she said "is that Ghost Ship nice?" and went "yeh yeh yeh" a pulled her a half of it. I didn't choose my seat too well, but the Barford Bovva boys (all hoodies and calling people 'mug' and 'toilet') soon vacated, leaving me to listen to two posh old ladies sternly debating Brexit.  One declared it should be up to young people because "they like mixing with their European friends" (an actual quote) whereas the other lady's view was basically 'fuck the youth of today, what about me?' so after an awkward stand off, they both burst into laughter for no reason to alleviate the tension.  A lady then had to ask her husband to explain what Ciabatta was and he did an admirable bready charade.  As I tried to enjoy my dull Charlie Wells/Roosters 'collab' (or 'collaboration' if you aren't a cunt), it was evident that despite me having been sat here nigh on 50 minutes and witnessed bored staff standing around not doing much, the crumbs, salt grains and bits of mixed leaf and red onion were not going to be wiped from my sticky table any time soon.  A poor effort from the Barf.

The hellish X5 bus appeared on time, and I was glad to note it went straight past my Travelodge so I could hop off early.

I'd not realised when I'd booked it but it was 2 miles outside Bedford in a place called Goldington.  It evoked memories of Warrington, delightfully basic though a bit churlish they waited til bang on 3pm to let me check in, surely ten to wasn't such a big ask?  Still, friendly and polite, like the kind of ladies you might meant in the Ten Bells in Whitechapel circa 1888, breakfast in a box, and an actual giant key to turn in a door, not one of those modern swipe things!

I found a local bus to take into Bedford proper, where I had three new pubs to do...... 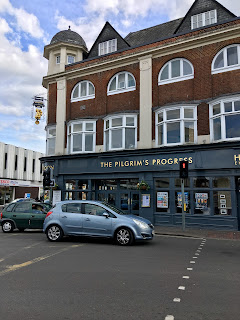 The number of times I walked past this between 2014-16 and thought 'might be a decent pre-emptive' but never did it, I now noticed it is one of those 'Wetherlodges' where you can stay too - why didn't I think to stay here instead?  The first noticeable point was what felt like a mile walk to the bar, reminiscent of the Square Peg in Birmingham where I got stuck behind a shopmobility scooter and it took me about 20 mins to walk from door to bar!   At the very back of the pub, I finally found the bar having nodded at a guy who looked like the Ghost of Christmas Past (from 1951 Alistair Sim Christmas Carol, THE BEST) who had been at the bus stop in Great Barford with me.  Small world!   A few Friday evening 'after work' blokes had gathered, scowled at my red leather jacket, and as I got served, I heard the staff asking "where have all these people come from?"  It made even less sense on a Friday post-work city centre 'Spoons in Bedford, than it did 5 years ago during peak Sunday lunch at the Stone Jug in Clophill.   I ordered an ale called Kodiak, very much like rich reddy dark brown soup, really not convinced these 'Spoons 'beer festivals' do anything for the quality of their ales!  Still, you'd pay a tenner for this in the Queen's Head in Newton, Cambs, and get it in a bowl with bread.  I sat near the front of the pub with a couple, she was pink haired and on pink crutches, I liked her.  As I eyed up the REAL book and DVD case and wondered if anyone in Bedford 'Spoons has ever read a book or watched an Eddie Murphy best of compilation, a glass collector came over.  "You look dreadful!" said the couple.  "I know, man-flu" he replied, "still, gotta keep going".  And isn't it true that the Wetherspoons glass collector is the busiest pub employee in the UK?  Not just a fact, a BRAPA fact.  So an entertaining and interesting 'Spoons, but won't be going down in the annals as one of their finest establishments. 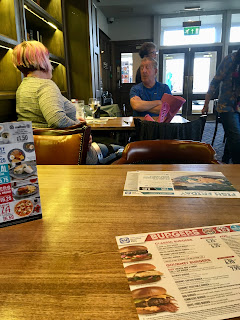 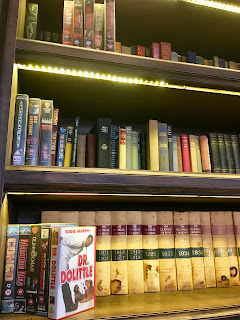 But hey, I'd soon be thinking nostalgic lovely thoughts of Pilgrim's Progress when we saw what our next pub had to offer!  More on that next time, plus tales of two more Beds ticks as Friday became Saturday.

Bye til then, Si