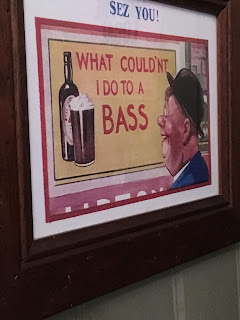 Iechyd da boyos and girlos!  See, I learnt the language whilst I was down in Swansea for my first real taste of how great Wales can be, despite several visits (though mainly to Cardiff which is more English/European than Welsh in feel ..... don't tell them I said that, they'd be cross).

I was down with Dad (and later Tom) for the last Hull City away day of the season, but a double overnighter allowed for the chance of some imaginative Glamorgan pub ticking.

Dad claimed he had never been to the Liberty Stadium before - he had, 4th April 2015.  He had no recollection of the day.  So when we arrived, a bit early to check-in to our Premier Inn, I took him to the pub we did that day, No Sign Bar, to refresh his memory.  It worked, pub-wise at least! 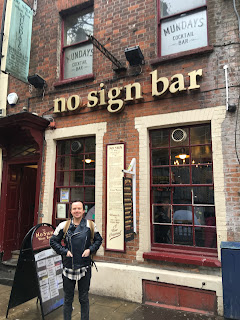 It is a very long  pub, has a sign saying it is called 'No Sign Bar' which is surely wrong, and the only people on Twitter who've done a more popular piece on it than me today are John Hartson (inviting Celtic and Swansea fans to drink there in harmony) and Brian May off of Queen who was here to save foxes or something with that dude from Eastenders.  I drank a Welsh red beer and we got to smuggle some snacks when the staff weren't looking cos we are English rebels. 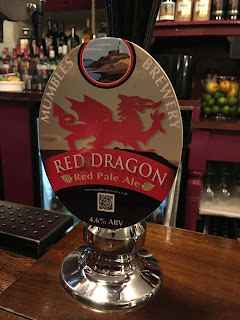 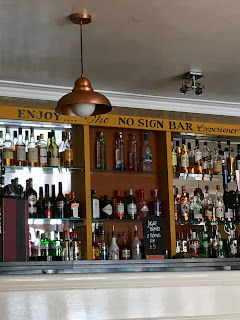 Anyway, I don't want to kill you with words about a pub I've reviewed previously, so instead, we'll talk about the staggeringly quality area of Mumbles.

That's where we headed after checking in, on the bus, beautiful scenery, we passed a pub we'd done in 2002 called West Cross which doesn't seem to get in the GBG anymore, probably cos all the regulars from then will now be 110 years old if still alive.  A bracing walk along the prom took us to our first pub ...... 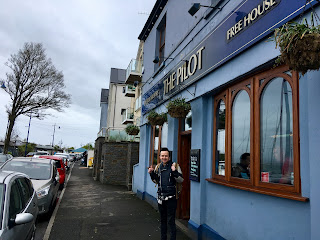 Oh yes, the Pilot (1592 / 2561) was a real touch of class from the moment we entered.  I was dying for a widdle so Dad was under strict instructions to order me a Draught Bass having read about Martin Taylor's visit here.  Like so many pubs selling this cult ale, the pump doesn't sit with the others, but is hiding behind a locals beer gut, a guide dog collection tin and a vase of plastic flowers.  No wonder when Dad persisted, the characterful barmaid gave him a knowing nod and wink, and may well have lifted up her underskirts to reveal a red triangle, which sounds a lot ruder than I intended when I started writing this sentence.  We sat in the early afternoon gentle hubbub of the wooden seafront pub, full of seafaring decor of yesteryear.  I thought a local had started speaking Welsh as if often the case when English people walk in, but he was just clearing some stubborn phlegm from his clack hole.  A real gem. 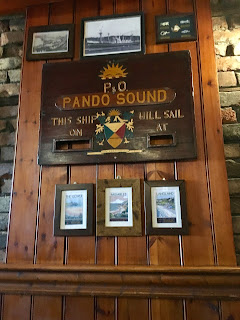 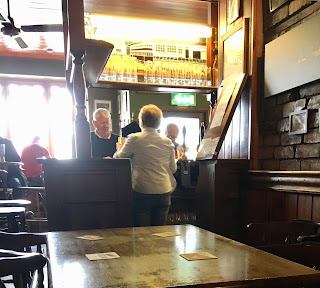 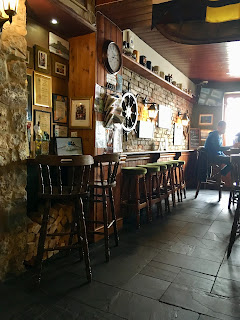 After enjoying our sandwiches on a bench with views out over Swansea Bay, which led to a nice rendition of local Bubblegum Pop Punk act, Helen Love, I scanned my GBG and was suddenly confused!  My paper based copy said Mumbles had FOUR entries, but the GBG App said only THREE.  It seems two had merged, Mumbles Ale House becoming part of our next tick, the Victoria Inn (1593 / 2562).......

Oh yes, if the Pilot had been marvellous, the Victoria gave us the kind of reception which made this even more memorable and special, pub of the day you'd have to say.  As we peered around the gentle old blokes at the ale pumps, they all turned around like faulty spinning tops, shook our hands, and didn't let go for about a minute!  They loved the BRAPA concept, and were even more impressed we were on the Bass again, telling me tales of a pub on York Shambles which sells the stuff (well, did 40 years ago) and vague talk of an away day 30 years back to Boscombe and Christchurch where a landlord with a casual attitude towards the drink was scared with the name of some famous Bass person of yesteryear and promised to put it on.  It just emphasised the culthood around this bloody drink!

This all set the scene for the weekend.  Everywhere we went, people were so content with their lives, slower paced, happy, there were no barriers or guards up, people were just very open and very real! Sort of Isle of Man / Portland-esque, a bit Dorset, a bit rural Lancashire.  Wonderful.

The barman deserves a special mention, Colin the cockney Spurs fan who did a better Yorkshire accent than us.  He likes Hull City cos of Tom Huddlestone and Michael Dawson links, and told us because we were 'Yorkshire', we had to go to his other pub, Railway Inn in Upper Killay and drink their strongest beer cos the locals down here can't handle it!  More on that one tomorrow ..... 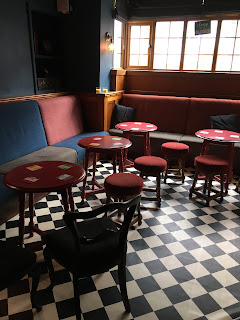 Oh, and the merger with once award winning Mumbles Ale House had all but fizzled out when the couple running it did what all former Micro owners do, buzzed off to Gloucestershire.  Felt like plain old Victoria, lovely old pub, and we couldn't have been happier).

Hidden close by in the side streets was our third and final Mumbles tick, unlike No Sign Bar in Swansea, it didn't have a sign but it did have a name......


Park Inn (1594 / 2563) was our third wonderful pub in a row, another ultra friendly barmaid, smiling locals and had one of those smells like what pubs used to smell like before 1st July 2007 and was all exposed wood and threadbare carpets, simple benches, the kind of pub any proper pub lover would appreciate and the Titanic White Star was a nice change from that crazy Bass stuff!   I can't tell you much more, but I had the BRAPA bit between my teeth now properly for the first time since 7th April so rung us a taxi from the wonderful Valley Cabs recommended to us by one of Victoria Inn old locals "never let mi down in 50 years" and sure enough, they were just the job to get us out to Bishopston. 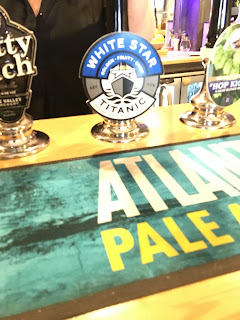 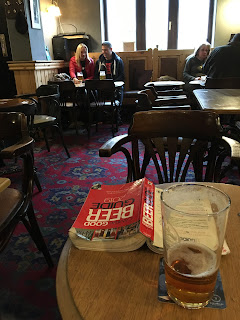 Joiners Arms (1595 / 2564) was the first of two GBG entries after a surprisingly leafy rural taxi ride took us to this village, and this was the one which came most highly recommended.  Surprised to see how popular it was with early evening drinkers, bar blockers dressed as Neapolitan ice cream (though Chocolate seemed to have gone to the loo).  But once more, it was a proper old boozer, and most of the time was spent being stared at by a particularly judgey french bulltwog.   I was starting to feel it by now though (the drunkness I mean, not the dog!) and could have easily collapsed into my Lenny Henry sponsored Premier Inn bed with Mark Williams and a bag of Monster Munch! 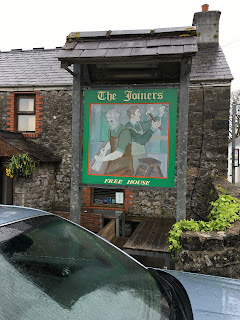 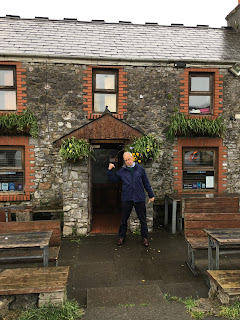 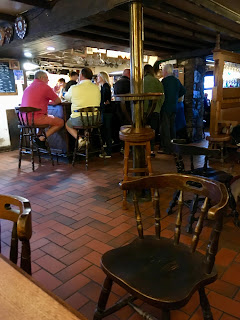 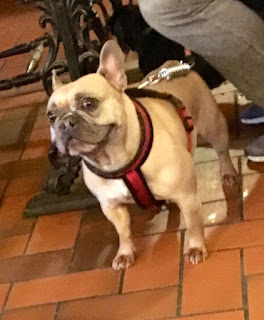 But now was not the time to have such thoughts, had to power through, though forgive me for reviewing Valley, Bishopston (1596 / 2565) and Woodman, Blackpill (1597 / 2566) as one, sort of.  Drunken feelings or not, neither pub could capture even a sober Si like the Joiners or the Mumbles trio had.  Valley was decent in truth, Woodman less so.

So what can I remember?  Valley, I was surprised how decent the Sharps Atlantic was though I think there was quite a serious drinks spillage by me!  But went to get us a glass of water each to help them down which was a good move, and that doesn't happen much in BRAPA unless I'm in Leighton Buzzard where I always end up feeling strange.   It looks a much lovlier pub outside and in from my photos than I remember, which shows what the mind can do ....... 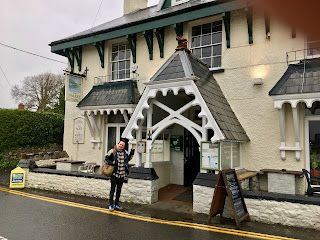 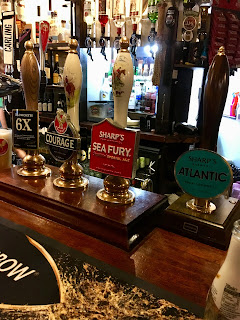 A taxi as far as Blackpill, on the road back in to Swansea sounds a bit like Blackpool with more pills (which probably isn't possible) but the Woodman was a bit of a roadside attempted dining pub ...... 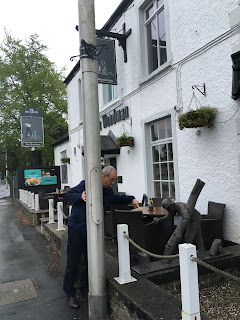 And as the ales went off one by one, we were forced into a spot of Greene King IPA which is never a good pint in my experience, but ok at this stage!  Felt a bit better by now, I sat us down but was told this table would be reserved in half an hours time so I moved now cos I don't like being moved by apologetic looking diners.  We kept a beady eye on the table from afar and no one EVER sat there.  Growl.  I took one indoor photo, not sure what it was supposed to represent, blingy handbag? 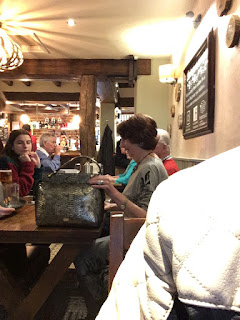 Oh well, hey ho, SIX pubs done plus a revisit, and we got back to our Premier Inn for a late supper, a bit of snooker, and an ok nights sleep before we'd do it all again on the Saturday!  Join me tomorrow or Thursday for tales of that little cracker of a day ...........