Gonna try and review these in a slightly different format, see if we can get through things quicker, like those more experienced pub bloggers do which frees them up for extra beer trips (Martin can sue if he wants).  Pretty sure I'll end up being too wordy and waffling on and on and on and on and on (oh look, it has started already).

'Twas Good Friday, and flanked by dynamic duo of Tom Irvin and Bernard Daddy Everitt, we were in West Brom for the football .... or so we thought.  In truth, we were in Cradley Heath for no football.  We didn't know that at the time.

West Brom's three remaining ticks I required, Three Horseshoes, Royal Oak and even Crown & Cushion (which GBG basically reckons is very close to The Hawthorns but isn't) were just not convenient on what we, at 11am, thought was a 'football football' day.

It was a glorious warm sunny day (compare that with the sleety air of Chelmsford just a week ago), and outside the first pub, Dad continued his recent trend of trying to airbrush Tom's 'Allam Out' sign out of photos:

But you can't keep a good man down and Tom can't be denied for long, even if it is from a safe distance: 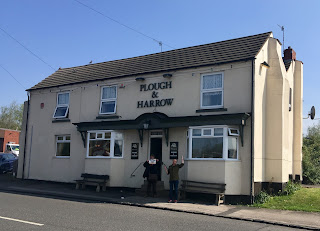 Plough and Harrow (1583/2552) was a charming Cradley (pronounced Craydley) Heath GBG effort, a real reminder of why West Midlands pub ticking is so rewarding.  An old boy wheezed as he served me a Banks' Mild and then two dogs waddled out, closely followed by bloke's wife who had exactly the same walk as the canines!  One had a rubber ring round its neck, for rabies is rife anywhere within a 30 mile radius of Wolverhampton as I'm sure you know. 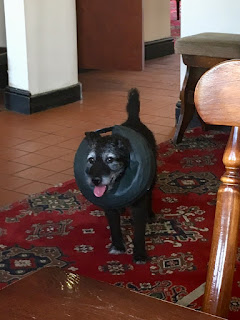 The fun was only just beginning as Twitter legend and friend El West Brom / Liquid Len swaggered in, very much the West Midlands Beyonce, all dark glasses and shaking his booty.  He headed straight to the bar, ordered a Banks' Mild, clicked his fingers at me to go up and pay, and wandered off for his morning 'toilet' and a quick ciggie.  #PubMan.  I could NOT get a photo with him in, he knows BRAPA tricks by now and stayed vigilant throughout, even quoting his image rights at one point probably. 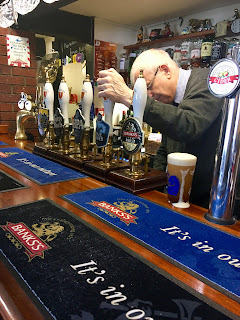 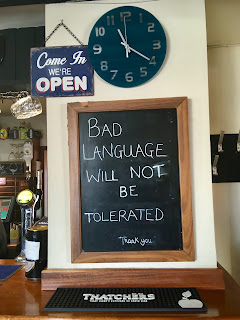 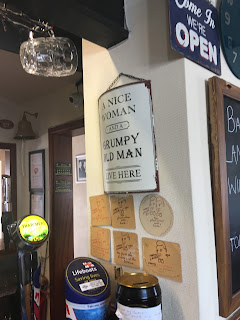 It soon became apparent neither Dad, Tom nor myself could understand WHY we'd decided to go to today's game and got tickets, well we didn't have to, so after some soul searching in the astroturfed beer garden in the sun, we decided against it.  For a while, we said we'd stay here ALL DAY, but Tom was right (as usual), made sense to get out to a few other pubs.  But this was a nice starter pub. And it may've been here where the landlady told Tom he was 'flying low' as we left.  Great customer service.

We said 'Farewell Dearest El' (a live David Cassidy b-side from his rare punk single 'Didn't We All Have a Fucking Lovely Day in Scarborough?') and waved cheerio as he hopped on a bus.

Yes, we were in Droitwich (famous only for its local supermarket, the Spa) for pub two.  It seemed an amusing little town and a nice young lady smiled at me by an entrance to a subway which contained the following subliminal message about my love life she'd probably just dawbed on ..... 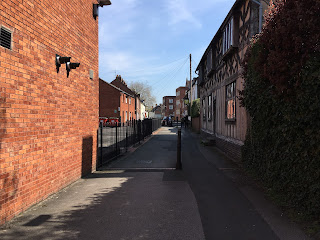 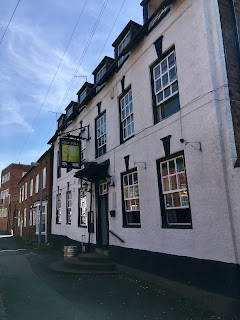 Hop Pole (1584 / 2553) was said pub, and Pub Curmudgeon says didn't have such a great time here but for myself and Dad (and perhaps Tom, I didn't ask), this turned out to be our favourite of today's pubs.  Still, you should listen to Mudgie ahead of me, he KNOWS stuff.  Stuff about Cheshire that'd make your toes curl, probably.  But I think he'd had a bad experience trying to get food so this may've been why.  The landlord was a lovely hospitable chap, looking into the BRAP Cam whilst giving Thomas the correct change is a skill many have tried and failed. 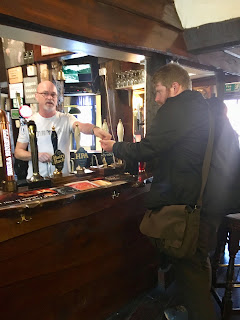 The interior was beautiful, lovely calming dark wood so a bit of a shame we'd got a taste for astroturfed sunny bullshit as we went straight outside with our drinks to join the rabble.  This was made worse by a lot of knocking and banging, it seemed some guys were erecting a stage / side building / extension, though in truth it was probably the angry ghost of Cyrille Regis wondering why the Baggies weren't in an automatic promotion position.  No wonder Dad pretended he wasn't here. 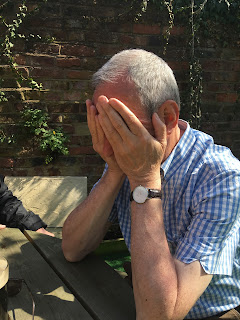 It was more than Three Degrees out here, I tell ya, and with twilds and twaddies in three quarter length shorts and Fred Durst hats out in force, we were ready for a change of scenery. 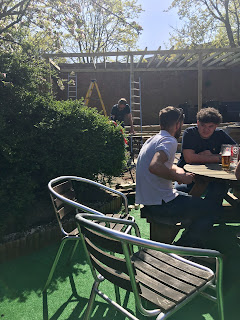 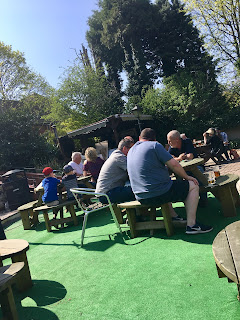 Next stop was Kidderminster.  Exciting times.  Hull City used to play them in the league every season back in the early 2000's / late 90's so I think this was about my FIFTH time around the ale pubs here, but first visit since 2004.  Had the ale scene changed?  Well yes and no.  King & Castle was still in, as was iconic 2001 tick Station Inn which had been taken over and made less good by the time we returned a year later.   Also, the twice visited Railway Bell was still looking resplendent on the railway bridge but it was never GBG as far as I'm aware.  I've done others (Red Man?  Did it have a phone box?) but can't remember many details about them!

Anyway, Kiddie always makes me chuckle.  Never quite sure why .....

But our two ticks in Kiddie today, firstly Beer Emporium & Cider House (1585) and then Weavers Real Ale House (1586) were almost certainly not around in 2004, having that whiff of Micronesia (Micropub Amnesia?) about them.  The Beer Emporium seemed to be, like Kiddie, more amusing than it was trying to be.  Tom had to scan a proper drinks menu in the predictable absence of blackcurrant cordial. 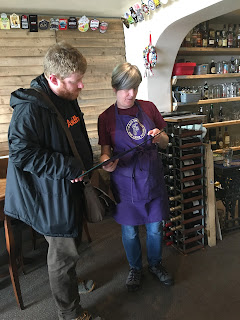 Joseph Holt's Bitter isn't an ale you expect to see in a Micro, even though I have before (on the Wirral to be not very precise) and gearing myself up for Manchester Punk Festival, it had to be done.  Enjoyable, amongst woke festival reminders, sexy shorts and theatrical Bass gesticulations, this was a decent place to have a good pint to cool you down on a hot day, not sure I'd find it comfy enough in the winter but guess I'll never know!  (Unless I do it again when Hull City come here in a couple of seasons time). 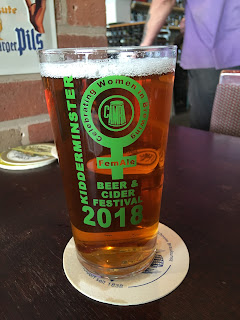 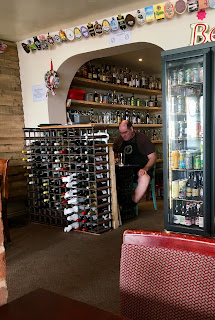 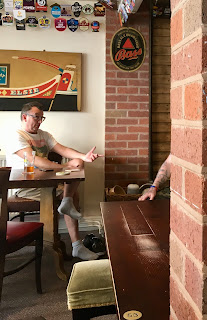 Weavers was a bit closer the station, and we were drunk enough now that Tom had got me to hold the 'Allam Out' sign and close my eyes, as a conflicted/disgusted Dad looked on ....... 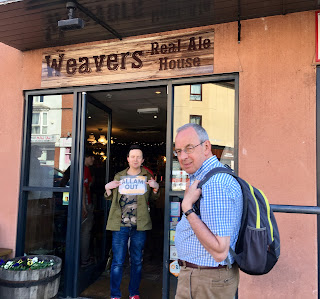 I liked Weavers more than the Beer Emporium, mainly cos it had a carpet so felt like a proper pub!  I didn't take any interior pub photos, and after the late train trauma of Gidea Park last week, Dad couldn't settle despite a gorgeous Cheese n Onion roll (ARE YOU WATCHING OLD TRANSPORTER IN HENLOW?) and some Tom chips, and he finished his drink quickly, announced "AREN'T MICROPUBS BOLLOX?" (I protested and he conceded this one was alright) and went to stand outside to try and entice me and Tom into an early drink finish which partly worked, though ordering a stout in this heat for my sixth pint was perhaps not my most sensible decision! 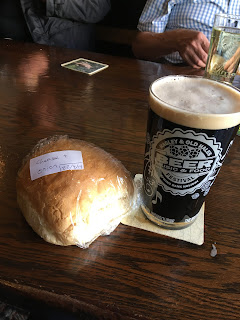 Predictably, we were back in Birmingham Moor St with too much time to spare, so had a nice coffee in that most ornate of railway stations as didn't really have the heart for Kilder again, then we whizzed across to New St for a very long painstaking journey back to York.  Hull City had lost 3-2, and it barely even registered a flicker of the eyelid with us.  Sad times.  Allam Out!