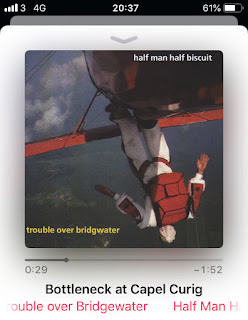 I was halfway through my Sunday in North London, I'd done three pubs and only had TEN more to do (not all today!) to complete this section of the Good Beer Guide which is never going to go down in history as the UK's next Stockport, Norwich or even Chelmsford.

Having said that, despite the high propensity of Wetherspoons (SEVEN of the remaining ten) I was finding it to be an amusing, good quality, characterful and varied day.  Just to clarify, I like a good 'Spoons anyway, and here in their heartland (the first one ever opened in Muswell Hill in 1979), they do feel a bit 'older' and pub-like. 'Lived in' might be the phrase.  Let's get them Heritage and Grade II listed!

But I needed sustenance, and still a bit wary of encountering more folk from Watford and/or Wolverhampton bound for Wembley Stadium, I hung back and did what anyone would do on seeing one of the UK's last remaining Wimpy restaurants  ..... I went in for a burger!

A plate?  A knife and fork?  Yes, they insisted on sitting me down.  Staff smiled at me throughout as I was the only person who hadn't gone in for a 'flat white' or asked about their range of McFlurrys.  Put on an ale or two and it'd belong in the GBG, I'm sure.

Anyway, I said "much better than BK or MaccyD's" on the way out (they love that type of shit), and hopped aboard the tube from Ruislip to Harrow, now confident all those cheeky football types will be tucked up safely in Wembley. 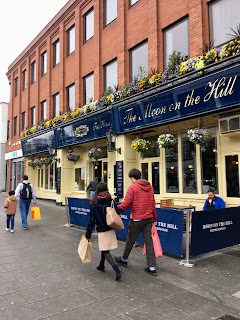 Despite 'bigging up' the older 'Spoons earlier, I can't say I was too impressed with this one.  I DID want to like it, being one of the smaller efforts, it felt very much like being in any old locals pub.  A bloke asked the barman if they'd been busy.  "Dead today mate ..... but packed yesterday when Man City were playing", seemed strange Watford and Wolves wouldn't think to use this place, even the GBG says it gets busy on matchdays.  My beer wasn't on good form, and the only real excitement came when I went to the loo and a huge fly from the Tropics was circling the room.  Something similar had happened in Blackpool Winter Gardens in 2007, causing one cockney punk to exclaim "IT NEARLY FLEW UP MY JAPPY!" so I uttered the same immortal line today in tribute.   But it didn't, and any thoughts of elephantiasis were gone.  It was time to leave, forcing down the vinegary dregs and NOT returning my glass to the bar as I normally would.

It was time to 'effortlessly' slide from NW to NE London, which I think I did via Finsbury Park after a long stretch on the Tube, and then an overground rickety train with a nod to Northern Rail which smelt of arse.

This was my Enfield debut, though I had met a bloke from there once, and despite supporting Spurs and enjoying being spanked by his missus, was a thoroughly likeable lad.

And after a spanking 10 minute march from Enfield Chase station, I'd found today's third 'Spoons with 'Moon' in the name, harking back to the early days when Tim Martin thought he was George Orwell reincarnated.

Despite the relative lack of intimacy and cosiness, this was a much more positive experience than the last one in Harrow.  Shame everyone looked so miserable, I was served by a bloke with a man-bun who obviously didn't give a shit whether I existed or not, but I ordered a 'Hen in Black' cos I thought it had a funny name & pump clip #SommelierSi2019  It tasted of beer.  The customers were similarly lacking in enthusiasm to be there, maybe Sunday evening blues and thoughts of the new working week were kicking in?  But probably not, I've noticed over the past 5 years that the pub patrons of London are more down in the mouth than anywhere else in the UK.  Shame cos they don't have it 'arf bad.   Shame Martin the Owl wasn't here today, he'd have cheered them up.  I sat at a table, where a 'Mail on Sunday' had spewed out several glossy trash mags, stuck to the table in classic 'Spoons style.  I supped my ale and read how Nicky Lyndhurst doesn't like fame, and then how Piers Morgan wants Mel B and Ginger Spice to have had a one night stand, and felt a bit ill.  On the way out, I went to the bogs and was minding my own business when a young local lad asks why I've got a rucksack AND another bag, so I explain Bedford, York and BRAPA to him.  "Gorrrrrrrr" he says, like a Londoner sounding impressed.  He then spent the next five minutes telling me how him and his cousin used to 'run' Enfield and that is why there is no crime on the streets like other London areas!  He finally let me vacate the bogs area as a cleaner wanted to mop the floor, but not before he'd demonstrated how you'd stab someone in the thigh if he attacks you from behind!  "BOSH!" he actually said out loud as he did the demo.  Terrified, I shook his hand limply and ran off.

After that unexpected interruption, I was convinced I was going to miss the next train out of Enfield so had to jog, half bewilidered by the whole Enfield bogs experience!

Luckily, the train was a minute or two delayed, so 'BOSH' (as we say in these parts), I caught it easily.

But BRAPA had facked ap (as we say in these parts), as I was aiming for a return visit to Winchmore Hill to tick of my remaining pub, a well thought of Micropub selling cordial called the Little Green Dragon.  Sadly, I noticed it closes at 7pm on a Sunday and it was now ten past.  Poor planning.  Should've gone pre-Enfield.  And to think the last time I was in Winchmore Hill, it was a Monday and closed altogether.  Sometimes you think you are fated not to visit certain pubs!

You've gotta be able to adapt at short notice in this game, so I jumped off instead at Ally Pally and although Muswell Hill looked a little bit far, Wood Green wasn't.

Again I had to cross a nice green area and saw the pub looking all big, square and stately in the distance ....... 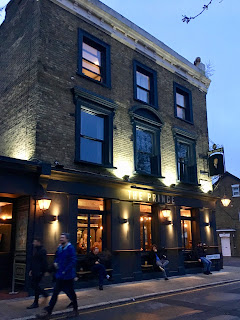 It is hard to put into words just how North London this pub was, but I kind of enjoyed it.  Let's be fair, I was ready for a break from the many 'Spoons I'd subjected myself to today.  Taken aback by how smiley-faced and jolly everyone was, I actually ordered my next pint based on the fact it was an Aussie IPA and I wanted to tell the barman I watched 'Neighbours' AND that the devil on pump clip was obviously supposed to be Peter Sutcliffe which is pretty edgy for this day and age.  However, the cheeky Scottish chap was having 'top bantz' with a bloke in a scarf and I realised the friendliness only went so far for outsiders with rucksacks!  I sat in the middle of the room as reggae music gently played, so the day had ended just like it had begun in Kilburn.  A French bloke with long dark hair which looked like soot billowing out of Notre Dam (too soon?) came to share my table without asking, but the book he was reading looked so old and serious, I pretended I hadn't noticed he was there.  In fact, I was more intrigued by the friendly old guys two tables away who looked very theatrical.  I joked to myself one looked like a fake squashy Danny Baker so I hypothesised on who the younger slim guy with his back to me could be, and decided on football commentator Guy Mowbray.  But I was surprised when he stood up and went to the bar to see it was real life Neil Morrissey!    More famous than real Guy Mowbray, never mind a fake one.  Oh dear.  Despite a few theatrical hand gestures and man-hugs, at least he was on the ale, more than can be said for most in here, but I still put my headphones on and played 'Bottleneck at Capel Curig' by Half Man Half Biscuit because it includes the line 'Neil Morrissey's a nobhead' and then I played it again, and once more just for luck.  Then I went to the bar cos I had too much time before my train, not enough time for another pub, so got a pint of some crafty thing called Pam.  A 3.6% sour.  Hmmm.  £6 he charged me!  Whaaaaat?  And he smiled as he did it.  AND it was a very acquired taste, not Joseph Holt's Mild that is for sure!  Bizarre end to a very interesting day of pubbing in North London. 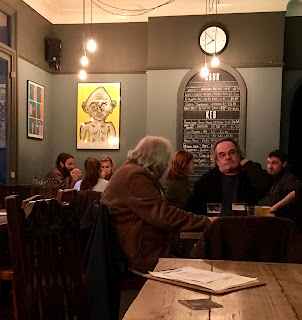 Amazing to think I was booked back on the 22:00 from King's Cross to York, and I'd been at pub number one at 12 noon and didn't feel like I'd dawdled all day, yet I wasn't exactly having time to spare as I made it back for the train.

There'd be similar shenanigans post-Chelmsford the following week, but that is a story for another day.  For now, I need to prepare for a very mellow WBA day (1 or 2 ticks?), and a less mellow Manchester Punk Festival where I've identified 7-10 'Punk Pub Ticks' I'd like to do but'll be happy with 5 as I might have to watch some bands!