BRAPA - Bedford Blues but Nothing to Lose

Having 'enjoyed' the 'delights' of the Pilgrim's Progrss Wetherspoons in Bedford, late last Friday afternoon, I noted it wasn't on the new list of closures (there'd be a riot, you mark my words) as I headed to the next pub, via a statue of local lad John Bunyan after whom that pub was named:


Our next pub was a minutes walk across the road. 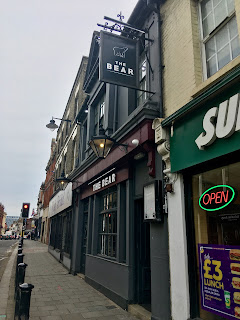 It happens once, twice, or if particularly unlucky, three times a year.  I'm talking about when you IMMEDIATELY know having walked into a pub "bloody 'ell, this shouldn't be in the GBG!".  A sparse unatmospheric arena reminiscent of a student bar and a gaggle of sullen faced young barstaff awaited me here at the Bear.   There were five handpumps, but four were turned round, despite three having jam jars displaying the colour of ales.  But what ales?   The only one on, 61 Deep, was actually well kept (though RM had a much worse beer experience on his visit!) and a cosy front left pool room offered some solace, but it was minimal.  As I read about rare cats (I might 'tick them off' when I've finished ticking the GBG), I moaned on Twitter about the pub, and was impressed that North Beds CAMRA who don't even follow me immediately wrote back and said they'd binned it from the GBG on account of new owners and poor quality ale.  Vindicated!  True, had I seen it on the GBG deletions section of the CAMRA website, I may've decided not to bother at all, but then again, where else was I gonna get to at this time of night?  Pavenham?  Odell?  Carlton?  No chance.  The few customers who were in this eminently dying shell of a pub were shady as hell, one young lady FaceTimed a guy with the voice of Dele Alli.  Sadly, I was so engrossed on tales of the 'Devon Rex',  I wasn't listening but she quickly told him to shut up and ring her privately cos its on FaceTime and ANYONE could hear, looking accusingly over at me, the only other person in the room.   I looked out through the window.  All I could see was Brewhouse & Kitchen, formerly of the GBG, breifly.  Pre-emptive?  I didn't have the heart, or the bottle! 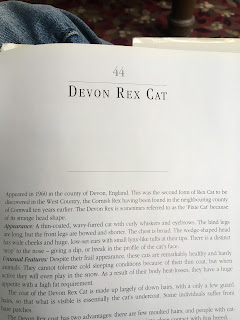 At least we could end Bedford on something of a high, with an old pub that had been in and out of the GBG since the year dot AKA 1974.  We had a second statue to enjoy too: 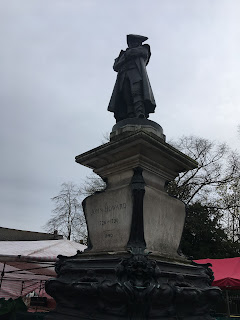 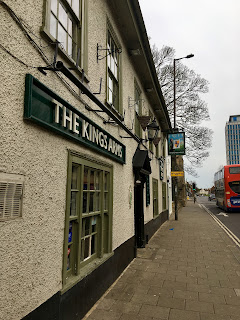 Not sure it quite evoked the memories of 2014 classics like Wellington, Devonshire, Cricketers, Three Cups and the like, but the low beams of happy local hubbub of a good Friday evening relieved to be out of work for the weekend was very much in evident.  Not impressed with the service, not enough people on and the lady tasked with getting the drinks to those dying of thirst was very one-paced.  I had an awkward wait with a nice young lady who was off to return to this gigantic pool tournament in a side room with her mates who all looked like extras from Les Miserables / Big Break.  The ale range was classic reassuring Beds, so I got one with a peculiar label which might have been from Belhaven, Saltaire or a cricket club.  Or according to those cheeky Brummies on Twitter, something to do with their local airport (they all found this reference highly amusing, but I didn't have a clue what they were on about).  I would've asked the barmaid, but I liked the mystery!  A bloke had actually said at the bar to her "oooh you poor thing, busy evening for ya!" as she served me, which set my teeth on edge cos it was like 3 people in 5 minutes.   I sat near the front of the pub near some blokes who were chatting about concrete or screws or cladding - classic Bedford chat, not much else happened but it was a perfectly decent pub and the mystery beer went down okay. 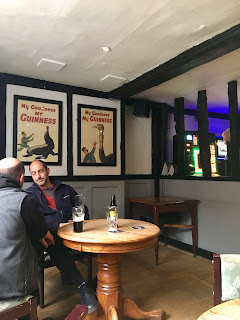 Now, for the two mile walk back to the Goldington Travelodge of some renown for an early night, there'd been a fair bit of travelling even if I was a pub down on the 'six pub quota'.

My route took me past where I stayed back in 2014, and bloody ell, haven't they spruced this up of late? 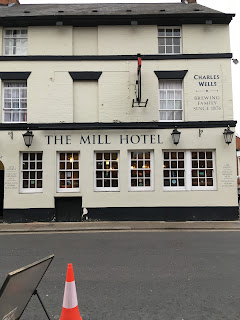 After plenty of food and soft drinks and a bit of TV, I was asleep for 9:30pm!  And after 11 hours of the good ole' dreamless, I jumped out of bed fresh as a daisy and after a breakfast box from reception, it was off to the Bus Station all ready to begin day two. 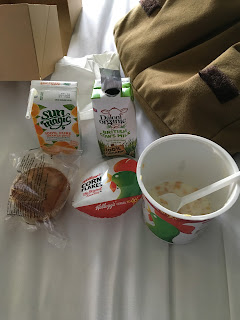 It was peak Bedford bus station, as me and a couple of codgers waited in the grey chilly morning air for the delayed number 27 to turn up.  It's a kind of hourly service, taking in THREE villages I needed, but sadly, they don't all stop in all the places all the time! (if that makes sense).

When the bus did turn up, it changed into another bus bound for Ampthill, and another bus with no display (which had snuck up behind), through word of mouth, became the 27.  It cost a fortune again.  I'd forgotten the vagaries of Bedfordshire since Jan' 2016 when I finished 'ticking' it originally, but it was all coming back to me like some repressed twildhood trauma where some naughty uncle dressed as the 2014 GBG sticks a finger up your bum.

As the motto goes in Beds, "a Grant Palmer is less reliable than a Grand Farmer" (or I may've just made that up cos it is terrible).

But after powering along a series of country lanes, we finally landed in Odell just shy of 12 noon.  It was an 11:30am opener, and was already full of locals, walkers and visitors so some nearby country park thing. 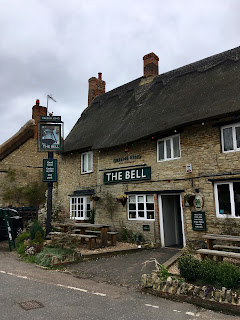 Another GBG regular (just not in the years I was doing Beds originally) but at least this pub had a solid quality feel of a happy, professional establishment and who can not enjoy a beautiful village pub with a thatched roof?   Staff were smiley and nice as I grabbed myself a good pint of Olde Trip from a very Greene King selection, though I suspect I was the only person NOT to be invited to take part in the Grand National Sweepstake, hopefully cos I looked very much like I was passing through or have never 'got' horse racing rather than because I was a weirdo!  The jolliest customer, a Dad drinking an entire bottle of red wine to himself whilst trying to get a toddler to walk upright and stop three teenage girls from sulking.  He did a weird greeting with another local who arrived, they went to shake hands, one pretended he had a broken hand and it hurt, the other then mock kicked him in the leg and the other said ouch and hobbled around, before both started laughing and hugged.  Is this a Beds custom?  I kind of enjoyed it.  Then, high drama as smoke started billowing through into the bar.  Turns out the chef had 'caught something' on the grill.  Not sure what his 'something' was, sounded very painful!  As a consequence, the main door had to be opened to get the fumes out, and you all know by now how I feel about open front doors in pubs in chill winds, grrr / brrr.  But as red wine man said, the smoke adds to the olde worlde atmosphere.  I agreed.  Then, an old bloke tried very hard to pronounce 'Jalapeno' failing miserably, but his sour cream wife came to life when she got hold of the sweepstake board.  Nice pub this one to start the day.

I had to crack on.  Plenty to do and a walk to the next pub.  I'll tell you about that either Thurs or Fri evening, but for now, take care and thanks for reading if you made it to the end!