5th April 2019 marks the fifth anniversary of BRAPA, so to 'celebrate'. I'm looking back at that eventful first day of 'official pub ticking'.

I never really wrote a proper blog about the EIGHT pubs I visited on that debut day, so with the aid of a few old notes, photos and memories, I'll try and remember exactly what happened.

Armed with the 2014 Good Beer Guide (fully laden with the heavy brewery section), yellow and pink highlighter pens (YES, I KNOW!), I headed down to Bedford on the morning of Sat 5th April, where I found the bus station (which was in a state of disrepair for pretty much the whole of the 2 years it took me to complete Beds ticking) and sat upstairs on a double decker bound for Ampthill.

Of course, I had to visit the first pub listed in the GBG first didn't I?  Unbeknown to me at the time, I'd actually visited 402 pubs in the GBG already so this was technically my 403rd tick.

The bus was a busy chaotic mess of Jeremy Kyle Mum's with buggies and evil whining children (twilds weren't a concept yet) and lunchtime rush hour traffic meant we crawled towards Ampthill, took about 40 mins and I was getting overheated and travel sick!  Was this BRAPA lark really such a good idea?

Finally, I pressed the bell earlier than I probably needed to and walked half a mile down Dunstable Street until I located the first pub ...... I could honestly feel my heart beating faster as the excitement built (SAID NO ONE VISITING A BEDS PUB EVER!) as I'd been gearing up for this moment for 3 months.....

I walked in with a beaming smile, looking left, then right, then left, as I strode towards the bar, milking the applause and cheers of encouragement.  Sadly, they were all in my head.  It was gone 1pm now, but it seemed I was the first customer of the day.  And the barman?  Well all he could say was "what can I get you?"  DID HE NOT KNOW WHO I WAS?  Ingrate.  Anyway, I ordered something from B&T, I think Dragon Slayer, perhaps Golden Fox.  I wrote how impressed I was by how many ales were on.  I'd realise in time that this isn't necessarily a commendable pub feature.   I wrote how I enjoyed the pub and I'd like to revisit it in the future too!  I'd soon lose this attitude if I was serious about ticking the other 4097 pubs I needed at this point.  I sat near the front door and finally, a bloke came in.  Quite young, he didn't seem a local either.  He blinked around nervously, got a pint, sat down and read a paper in my eyeline.  I didn't photograph him.  I was nice in those days.  I was paranoid he was ticking off every pub in the Good Beer Guide, but as I'd reflect the following day, "there's no way there's anyone else in the UK doing THIS!"  Time for the bus back to Beds.


The bus back started out a quieter affair, just a few old folk going into 'town', a motley crew. I did my first ever BRAPA twitter check in.  It got zero likes, zero retweets and zero comments.  I had about 10 followers in those days, and 7 of them were Russian bots who weren't happy unless I was drinking vodka off Putin's chest or something.


But I couldn't rest on my laurels as the bus suddenly juddered to a halt in a retail/business park halfway between Ampthill and Bedford.  We were all told to get off.  "Oil leak!" says the bus driver.  I was left wondering not for the first time today if this BRAPA thing was gonna be such a good idea.

The locals started kicking off and when I told the ring leader lady I'd come from York just to visit a pub in Ampthill, she told me she was embarrassed on my behalf by Bedfordshire transport and pushed me to the front and used me as the case study for her complaint!

Finally a replacement bus arrived, and after much grumbling by the old buggers, we set off again and were back in Bedford, where I checked in at the Mill Hotel, a fairly large but grotty looking pub with some basic but clean upstairs rooms.  It was about £25 a night, in the days before I became a Premier Inn/Travelodge sell out!

I thought it'd be kind of nice if I did the SECOND pub listed in the GBG (in Arlesey) next.  After all, Arlesey had a railway station and was near Biggleswade which was also on the first page of the GBG.

Me being me, I'd set myself a 'mini' challenge within this bigger challenge, and that was to tick off every pub on the first two pages of the GBG before my train back to York the following evening.  So as well as Ampthill, this meant Arlesey, two in Biggleswade, and the 7 listed under Bedford.

Sadly, I'd not done my research properly and to get from Bedford to Arlesey on the train, you had to go all the way back to London and change!  No way.  So I got this £13 expensive 50 minute bus instead to Biggleswade, driven by a bus driver so quintessentially Bedfordshire Bus Driver, he's exactly what you'd draw if you were asked to draw one!   And he ended up driving nearly every bus I was on for the remainder of the weekend to the point it was almost awkward.

I then took the train to Arlesey, and it was 15:30 by the time I found the second pub in Arlesey and was already learning everything takes longer than you'd expect in this game ........ 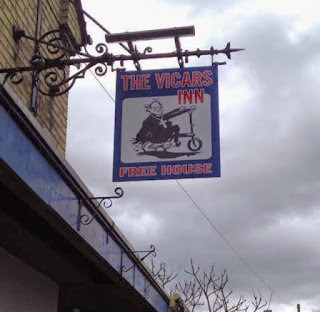 I heard the southern farmery booming laughter of old boys gathered around the main bar, so terrified, I found a side/back entrance and tip toed to the bar, where the hospitable matronly landlady eventually saw me so I asked her what ales were on, and it was basically Charles Wells Eagle IPA or nothing, so I went for that!  This beer kind of symbolised my pub ticking in Beds right up to the time I completed the county in Feb 2016, and although I reported it tasted like 2p coins in an amusement arcade in Bridlington, it was great quality and I was hooked on it like a dragon on smack by the time I completed Beds in Jan 2016!  It's funny looking back how I talk more about beer and less about the pub than I do in 2019.  I guess beer was new and exciting back then(!)  She was a nice lady, and encouraged me to come round to the front bar and chat with the locals.  I told her I was fine but thanks for the offer.  There is NO WAY I'd do that nowadays.  In fact, I'd have gone in the front entrance straight off.  But I was more timid back then.  It was quite a rural location, and I was shocked to find, on Beer App 'Untappd' that no one had ever checked in at this location before and I had to create it!

I didn't take any indoor photos, far too scared, but although my twitter check in again got zero likes, my work friend Joanna at least commented on the Willy Fog aspect of it which made her the first person to engage with a BRAPA tweet.  And we still make cups of tea for each other in this day and age aaaaaahhhh ..... 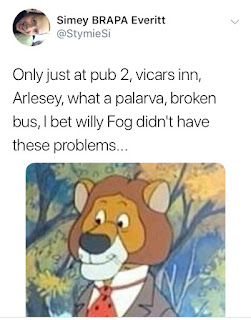 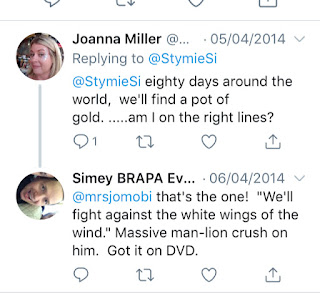 I felt like the hard part of the day had been done, and it was now a case of how many pubs I could get done before closing time / I got too drunk.

So it was back up the train line to Biggleswade, where 3 pubs were listed.  I only cared about 2 of them though, as the third (Wheatsheaf) wasn't on page 1 or 2 of the GBG which sounds silly, but I wasn't bothered about visiting it! 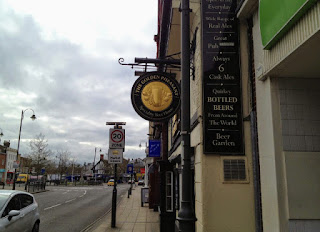 This was a real hive a local atmosphere, with a cracking hubbub I'd been missing in the first two pubs.  I ordered this really nice New World IPA by Charles Wells, which was THE 'Bedford Hipster Chic' drink back in 2014, and had to hurdle over a series of dogs and dog leads to get from door to bar, and back to a seat.  A nice lady liked my red leather jacket, and came over to give it a stroke.  Biggleswade has never been more animated.  I've done plenty of other pubs in the town, but this one remains my fave and is a GBG regular like the other two I'd just done, always nice to see! 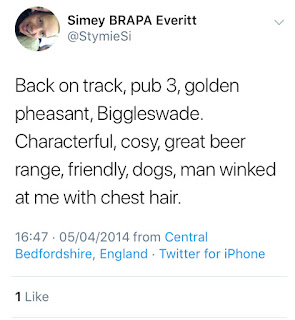 To save too much more reading, I'll whizz through the other pubs.  I stayed in Biggleswade for pub 4, the Stratton House Hotel.  It was the first 'high end dining venue' of BRAPA, didn't really grab me though staff were nice.  My stout from Great Yarmouth was a bit 'thin'.  Dad messaged me, he didn't really understand this BRAPA lark at this stage ..... "make sure it doesn't consume your life" he warned.  OOOOPS!  Anyway, Hull City had beaten Swansea 1-0 thanks to George "one eye" Boyd, so a nice winning start to BRAPA.

I took the bus back to Bedford (my bladder would never manage it these days!) and it was gone 7:30pm by the time I got within sight of pub 5.  I'd worked out I'd need to do 4 pubs before closing time to give my self a chance of completing my mini challenge tomorrow.


The Wellington Arms was my first, and might still be the best pub in Bedford I've visited.

But pub 6 (Cricketers) had a special place in my heart, for its chilled old school proper basic boozer fun.  I was sad less than 6 months later when it got deleted from the GBG as it had closed.  I heard a rumour it has reopened since but cannot be sure. 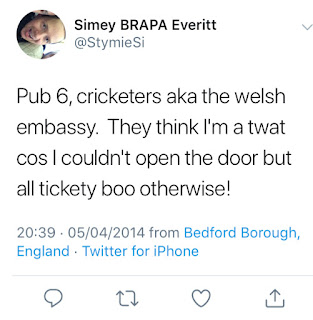 Now for the long walk to the 'edge of town' pub for number 7, the White Horse.  still in the GBG to this day, but even then, I didn't quite understand how it was GBG.  It was very much an estate pub, gloriously standard (the 2019 me would appreciate it a lot more). 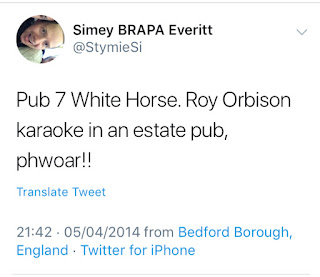 I marched back into town and down the backstreets for the 8th and final pub of the night, a very good one called the Devonshire Arms but I was too drunk by now to appreciate it.  In fact, all I remember is getting lost looking for it and ordering an ale by Oldershaws in Lincolnshire because I like the shape of their pump clips.  I didn't do a Tweet cos I was too drunk, and staggered back to my hotel as I knew I had plenty to do before my 8pm train back on Sunday if I was to stay on track and visit all the pubs I wanted!

And I'll tell you about that second day some time soon.