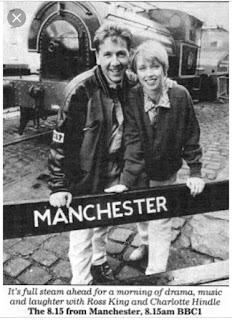 "Manchester Punk Festival for a third time in four years combined with Good Beer Guide ticking, you're bloody mad, it can't be done!" said the ghost of Sid Vicious, on the train ride over t'hills.

I was in Eccles for 10am on a baking hot Easter Saturday.  I'd sneered at people outside the first pub, a Wetherspoons called Eccles Cross (Net pub number 1587, gross 2556) last year en route from the gorgeous Lamb Hotel to something less memorable in Monton, so it served me right they'd banged it in the GBG this year to teach me a lesson.


Turns out the actual Eccles Cross was an ancient neglected monument, but no one cared about it til a van accidentally ran it over in the Second World War.  Then, as so often happens, everyone got their knickers in a twist so they built the above replacement, which may also been a fancy public urinal.

You don't have to go far from Manchester for people to start reaching peak weirdness, and here, a man with one of those accents only train geeks have explained he was going to watch a live orchestra perform the Imperial March.  Then he hummed it.  Loudly.  For ages.  He had pig trotters for hands.  Welcome to the North West.

I drank a 'This.Is.Eccles', very nice, a group of 18 year old lads made an exhibition of themselves trying to order breakfast and find a seat (first time in a pub?) and it was a surprisingly calm, clean and well-to-do 'Spoons when you think how rough n ready the neighbouring Lamb is. 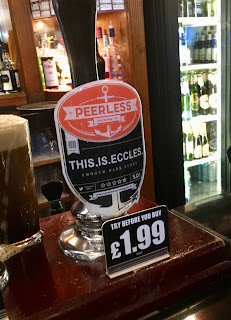 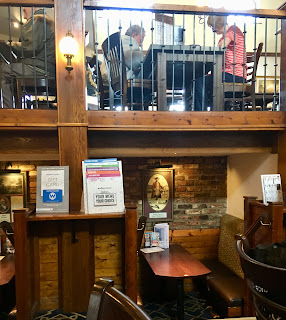 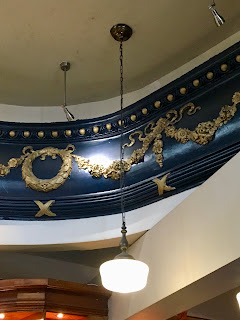 Next, I caught a very strange smelling bus to Higher Broughton for one of those 'try before you die' ticks just North of Manchester centre.

Wow!  Glad I didn't visit under the cover of darkness or doubt I'd have got out alive.  Rubbish was strewn across every pavement, a group of kids of bikes snarled at me and one threw a projectile frisbee style at an old woman's window.  Then a topless tattooed Dad told his daughter to get her arse back in a paddling pool.  The pub was hidden down a warren of backstreets. 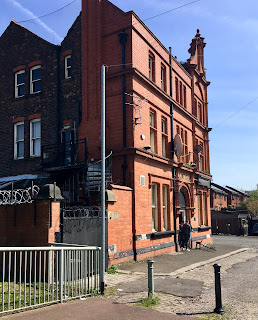 It kind of DID look like a Joseph Holt's pub, but also a bit like a prison for the Mancunially insane.  But I loved the Duke of York (1588 / 2557), it might not be for everyone, but the edgier pubs are for me, a breath of fresh air in a GBG filled with Micropubs, Cafes, Brewhouses and Kitchens.  I tried to look 'ard. striding in confidently where a young hapless lad was trying to 'woo' the barmaid with Easter chocolate, but she had some allergy or 'intolerance' to the stuff, he looked crestfallen but she told him it was a nice gesture, and gave him a quick peck on the cheek.  The ale selection was reassuringly straightforward, Mild or Bitter or Three Hoots, I went for Bitter cos I got mild last time in a pub like this, but then remembered I'd had this same ale yesterday in a Kidderminster micropub!  Fail.

The pub reminded me a bit of afore mentioned Lamb in Eccles, only slightly less pretty, more Eagle & Child in Whitefield, Lord Nelson in Urmston or Railway in Broadheath.  Classics one n all! A bloke asked if I could look on my 'gizmo' to see when Man City kicked off.  When I said 12:30 and not 3, he sulked, downed his pint and left.


Now, I walked further north to a Metrolink stop I'd spied called Abraham Moss who sounded like a Jewish Wetherspoons, and the mean side streets and estates gave way to an Asian community.  Sadly, the Metrolink lines out to Rochdale, Bury, Oldham and the like were all closed for the bank holiday!  So bang went my plans to get my ticks in Prestwich and Failsworth.

I didn't have the stomach or bladder for replacement buses, so I headed back to Manc to check in my hotel and enjoy a day of punk rock in the sun. 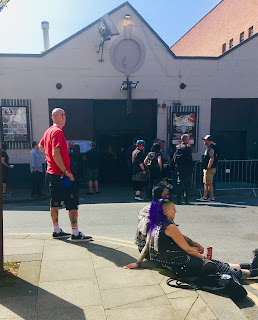 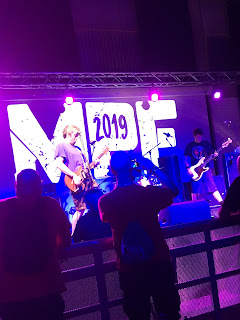 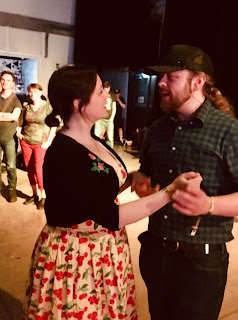 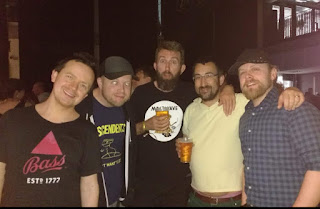 My sister and her boyfriend (far right in above pic) found a nice pre-emptive right next to the main venue called the Salutation. 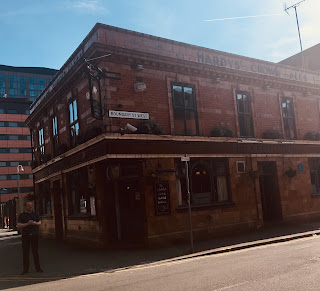 Spent A LOT of time in here over the next two days, Titanic Plum Porter and Cherry Dark plus some nice Brightside Pale helped immensely.  Cambridge Utd's punkest fans had been in the gents cubicles ..... 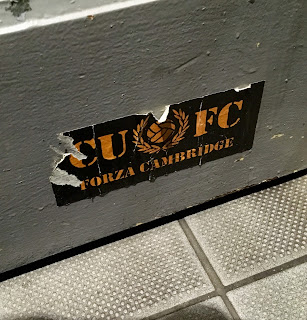 Charlotte Bronte started writing Jane Eyre here, but couldn't finish it til she got to Haworth because the ales were just too distracting ........ 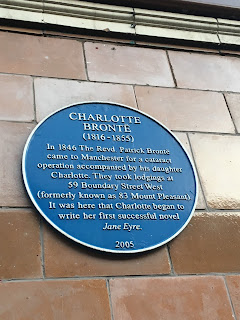 Now, I'm not saying the festival goers are idiots but they are idiots.  Why oh why stay in hot sweltering venues with limited metallic seating supping £5.50 'Draught Beers' and the like out of plastic cups when a 1 minute walk takes you here?  Still, nice to have an almost empty pub to ourselves.  Not saying I didn't sample the venue beers, am pretty sure this Punk IPA actually spoke to me at one point .... 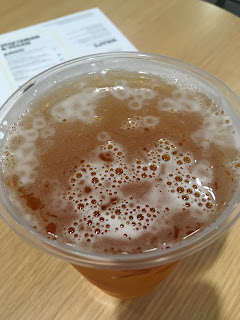 After a good night, I slept well in my Premier Inn (that is how punk I really am!) and after a very average Full English, I climbed the steps at Deansgate Metrolink 11am on Easter Sunday, or 'Zombie Jesus Day' to give it its real title.   Time for early pub ticks before the punk begins!

Luckily, 'posh' Manc was still open on the Metrolink so I decided to upset an old lady by saying "give it 2 more days, and we'll be begging for colder weather again" (she went to sit in a different carriage).

West Didsbury was my next destination, the first of 3 ticks I got done today, my first concern was 'I need to draw out cash!' but luckily, a cashpoint was right next to the pub, which was open, 11am even on ZJD, love it when a plan comes together ...... 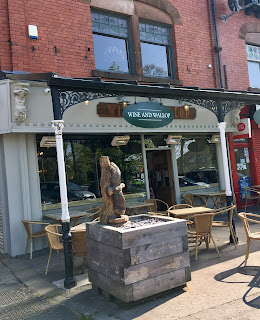 But the highbrow sounding Wine & Wallop (1589 / 2558) was a 'no cash' bar, first time I've witnessed such a thing outside of London or Reading Uni up north.  Well,  I say 'up north', but anyone who has been to Didsbury or neighbouring Chorlton will know it is about as northern in spirit as being stuck in a jellied eel factory with Ray Winstone and Janet Street Porter, whilst Jamie Oliver licks your face.

You can't deny Wine & Wallop had a great welcome, even if all the staff looked they belonged to a travelling Romanian Circus, the barman even said 'great top' to my Swingin' Utters t-shirt.  Less said about my holey trousers which got criticism all day from punks and townies alike, the better!  To quote my sister "what the fucking hell are they?"  Ale here was quality, more from Brightside, such a great brewery, though I don't like handled glasses.  A couple behind me loudly invented a scenario where they had a life threatening disease and what action they'd take.  It was all rather bizarre.  Couldn't be much different from Duke of York in Higher Broughton, but that is 'Greater Manchester' pub ticking for ya!  Keeps you on your toes at all times.  And you can generally rely on the beer. 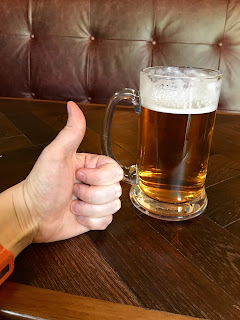 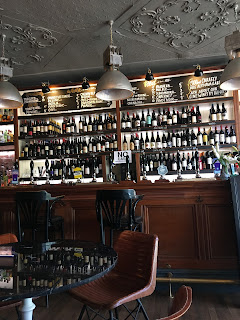 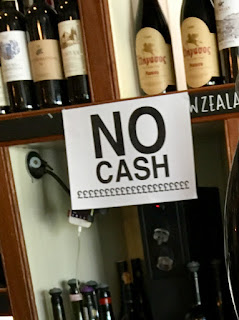 Back in Manchester PROPER, I had one remaining City Centre tick to complete and it was very well thought of according to Twitter people who saw I was there.

Just like the Brink on the opposite side of the road, I descended down a flight of steps ('slippery when wet' as hardcore punk rockers Bon Jovi once said) and a relief to be underground and in the cool. 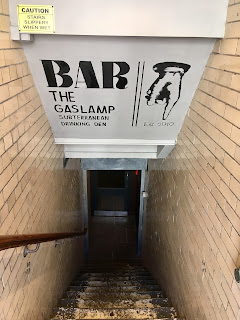 'Subterranean drinking den' The Gas Lamp (1590 / 2559) did have a classier feel than the Brink, lovely old tiling like one of those picturesque public bogs, and a guy who was pleasant but perhaps a bit shy and therefore not the most peopley person served me summat 'pale and modern' and you know what, I paid by card even though I didn't have to, cos that is what Didsbury had done to my brain.  Never before, never again!  There was only one other customer, he sadly didn't do anything weird, I wish I'd sat in the back parlour which looked 'the place to be' but I only spotted it late, so all in all, yes, a bit of a BRAPA non-event but that's not to say it ain't a pleasant place to go and have a pint.  My friend back home compared it to York's Blue Bell.  I think that might be overdoing it a little bit.

Next (and finally for the Punk Fest), I strode out to Rusholme which I'd heard of but never been to.  It was a good but achievable yomp from Oxford Road, where most of the Punk Happenings were.

On the way, a dishevelled student who may well have been drunk passed me an aqua blue mobile phone, battered and from about the year 2000.  "It's for you!" he instructed.  "HELLO?  HELLO?" I said.  There was no one there.  I passed it back to him and walked on.

Rusholme looked like it was well on its way to becoming studentrified, despite there being zero appetite for such a course of action from the locals.  That said, the GBG Wetherspoons I was here for, the Ford Maddox Brown (1591 / 2560) felt more like a Pizza Hut.  A red and green colour scheme, staff with t-shirts with "PIZZA" written all over them, and more adverts and menus for the things than beer itself.

If it hadn't been for blokes with tattooed calfs in three quarter length shorts supping lager galore, I'd perhaps have forgotten I was in a 'Spoons.  The folk were very watchful, some looked downright suspicious, staff smiled to a minimal degree, but overall, it was a nice cool place on a hot day to chill out before I got back to the Punk mayhem. 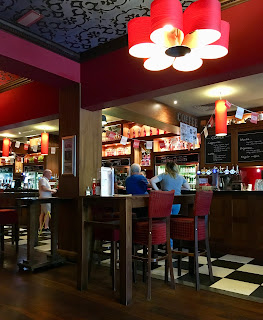 So I'd only done 5 pubs from my wishlist of 10, but under the circs, not a bad return as I wasn't really here for BRAPA at all!  Plus, I had Swansea to look forward to with plenty of opportunities which I'll tell you about next time.